Louisiana has a deserved reputation for great food.  Whether we’re dining at home or in a public venue, we eat well. Restaurant meals tend to be more formal, of course, with dishes served in courses, rather than all at once.  In that spirit, we’ve asked chefs from all over the state to provide recipes for a five-course meal. You could take this menu and put together a fantastic dinner party or make them individually for a more casual weeknight indulgence.  In Southeast Asia, where they know a thing or two about heat and humidity, folks often eat spicy dishes when the temperature rises, on the theory that spicy food will make you sweat and cool you off. That’s at least part of the reason we’ve included the Vietnamese inspired entrée.  Another line of thinking is that hot weather demands cold food, and thus two of the recipes here – the pickled shrimp and watermelon salad and the chilled watermelon and dewberry cream soup – are served chilled.  We’ve tried to keep the recipes approachable; even the dessert, which may look daunting at first glance, should work out fine for a home cook.  We hope you enjoy cooking these dishes. Whether you prepare one or all of them, we’d love to hear how they turned out.

Chef Gregory Doucet has roots in southwest Louisiana. After graduating from Comeaux High School in Lafayette, he attended the John Folse Culinary Institute at Nicholls State University, graduating in 2012. Doucet served an externship at Orienta Beach Club in Mamaroneck, New York, before returning home to work at Jolie’s Louisiana Bistro, where he was named executive chef in 2013.

Jolie’s Bistro is elegant without being stuffy. Paintings by George Rodrigue adorn the walls, and the menu is centered on Louisiana classics, but Doucet and his team branch out now and again with dishes like the roasted bone marrow with oxtail jam and smoked salt and the cioppino stew, featuring seafood sourced locally and further afield in a tomato-based broth with a red pepper aioli. 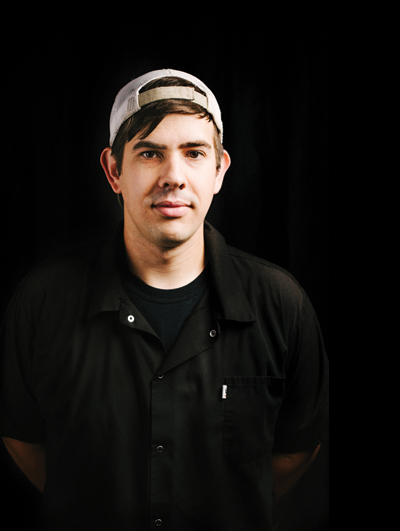 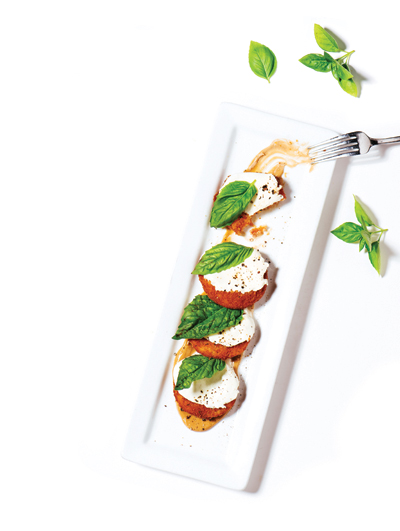 Greg Doucet | Jolie’s Bistro | 507 W. Pinkhook Road, Lafayette | (337) 706-8544 | jolieslouisianabistro.com
This appetizer combines Southern and Italian elements for a winning combination. The crispness of the tomato works nicely with the soft, fresh cheese, and the balsamic mayonnaise sauce provides richness and a sweet-tart accent. If, like me, you have too many tomatoes in your garden toward the end of the season, this recipe is perfect.

Sauce
In a small saucepan, reduce ½ cup Balsamic vinegar to ¼ cup on low heat. Allow to cool and mix with 1 quart of Mayonnaise.

Finish & Plate
Brush the plate with about 2 tablespoons of balsamic mayonnaise mixture. Place a slice of tomato over the sauce, a slice of mozzarella cheese over the tomato and finish with a basil leaf. Season to taste with salt and freshly ground black pepper.

Chef Paul Poe is from Oil City, a town of about 1,000 souls in Caddo Parish. He started his culinary career in casino kitchens before joining the team at Bella Fresca about three years ago, taking over the executive chef position earlier this year.

About his inspiration for this recipe, Poe says,
“I picked the wild dewberries and grew the jalapeño in my backyard. While making it, I thought of being a kid and putting salt on your watermelon in the hot Louisiana summer, so you should get that up front. The dewberries reminded me of growing up picking them with my family to make cobbler and jelly.”

Dewberries, for those not familiar, are close cousins to blackberries and in this recipe they’ll give a slight tartness that balances the richness of the sour cream just as the sweetness of the watermelon offsets the roasted jalapeño. 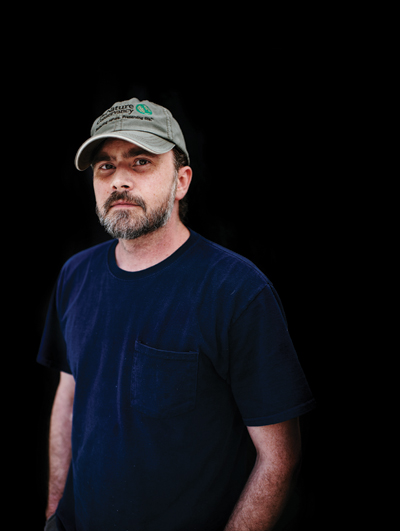 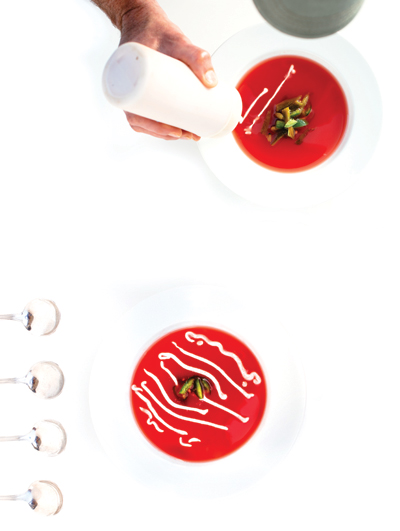 Paul Poe | Bella Fresca | 6307 Line Ave. | Shreveport | (318) 865-6307 | bellafresca.com
Chilled soups are, of course, great in the summer, and the addition of sour cream to this one gives it something of a central European feel, where such soups are common.

Sour Cream
Blend 3 dozen dewberries and strain through a fine-mesh sieve to remove the seeds. Mix with one cup of sour cream and chill.

Jalapeños
Roast 4 large jalapeños on a burner or grill until the skin chars and blackens. Remove the skin (made easier if you allow the chiles to steam in a paper or plastic bag for 10 minutes) then remove the interior veins and seeds. Cut the peppers into thin strips.

Finish & Plate
Portion soup into 6 to 8 bowls, add a dollop of dewberry cream, and top with roasted jalapeños.

Chef Troy Deano is from the New Orleans area originally but has cooked for a number of years in Baton Rouge, and now calls it home. Deano is an alumnus of the Besh restaurant group, and told me “Rene Bajeux really taught me how to love food while he was at La Provence, and Steve McHugh [another Besh alum] from Cured in San Antonio really taught me how to live it.” More recently he worked at 18 Steak in L’Auberge Baton Rouge and was the chef at City Pork Brasserie and Bar. Though young, he’s clearly skilled in all aspects of the professional kitchen, as evidenced by his Louisiana Summer Salad. Currently, he’s working as a private chef with plans to open up his own restaurant. 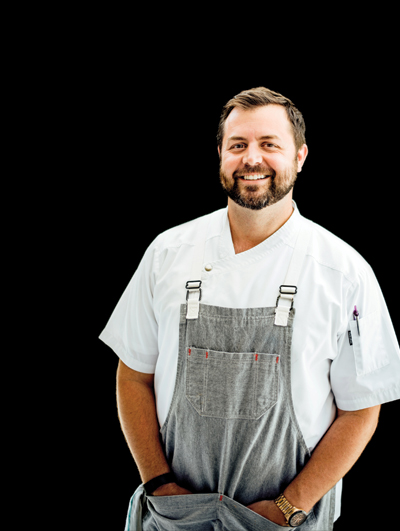 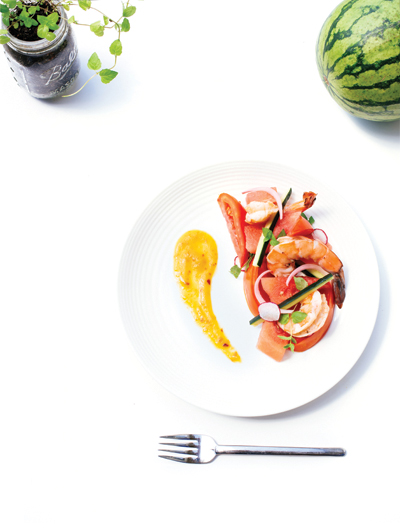 A quick pickle leaves the shrimp tender and well-spiced; the heat is balanced by the sweetness of the watermelon, and there’s a depth of flavor added by the tomatoes and the Steen’s. The mint adds a refreshing herbal note to bring everything together.

Chef Ryan Hughes heads the kitchen at Purloo, the restaurant in the Southern Food and Beverage Museum in New Orleans. Named for a low-country rice dish that’s similar to jambalaya, the food at Purloo is pan-Southern.

Though neither goat nor curry may spring to mind when you think “New Orleans food,” the dish is emblematic of one of the city’s more recent immigrant populations, Vietnamese. Vietnamese restaurants outnumber those of just about any other cuisine in the Crescent City, and the number seems to grow weekly. The reason is that the food is vibrant, light and despite its current popularity, still somewhat exotic. Depending on where you’re reading this article, goat may or may not be easy to obtain in your local supermarket, but the Louisiana Meat Goat Association (lameatgoat.net) lists producers all over the state. It’s a mild meat, but if you can’t find it or would prefer something else, you can substitute lamb. 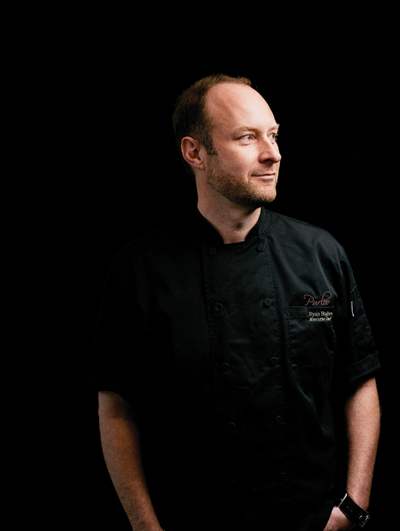 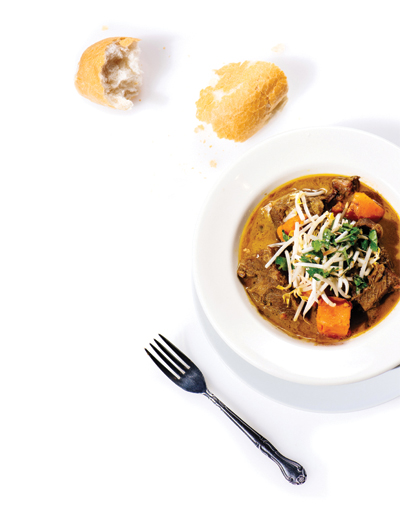 Meat
Season 5 pounds goat stew meat, (or lamb) cut into pieces with 2-3 tablespoons Curry powder and Kosher salt to taste. Let rest for 30 minutes, then brown in oil, in batches, and remove from pan. Reserve.

Finish & Plate
Bring to a boil, reduce heat, and simmer until meat is tender, about 1 hour. Taste and adjust for seasoning, then add 2 cups coconut milk and 2.5 pounds sweet potatoes (peeled and sliced ½-inch thick). Cook until tender, about 15 minutes. Garnish with 1-2 bunches of coarsely chopped cilantro, and serve with bread, preferably Vietnamese banh mi.

In the event the name doesn’t tip you off, chefs Arthur Durham, Mohamed Chettouh and sous chef Andrew Hartman serve unapologetically French cuisine at La Truffe Sauvage. The elegant Lake Charles restaurant has long been considered one of the best in the area and the state.

House-smoked salmon with potato galette and avocado crème fraiche; pan-seared foie gras over a dried fruit brioche with apple terrine and a blood orange reduction; tournedos Rossini and a nightly soufflé are just some of the dishes on the menu. These are classic dishes for a reason; when prepared with skill and attention, there’s nothing better. 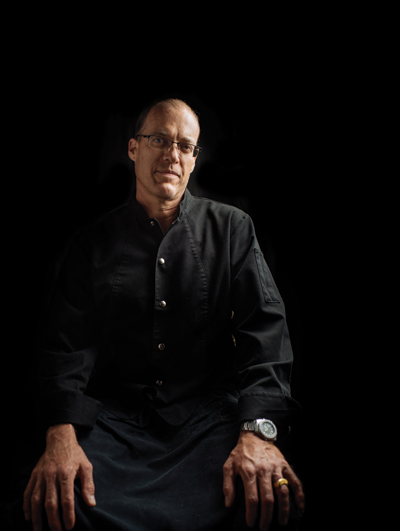 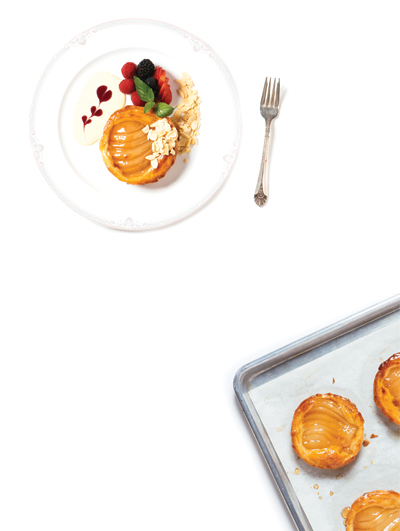 Poached Pears
Combine 1 cup granulated sugar, 2 cups water, ¼ cup white wine and 1 lemon (cut in half) in low-sided saucepan with a lid and bring to a gentle boil, stirring occasionally to dissolve sugar. Peel 2 ripe Bosc pears. Cut the pears in half, from top to bottom, and using the tip of a paring knife, carefully remove the stem and seeds. Slit ½ vanilla bean down one side and scrape the seeds into the syrup. Place pears in syrup, along with vanilla bean. Gently simmer, covered, until pears are easily pierced with a paring knife. Remove pears and cool to room temperature. Syrup may be used again for poaching fruit.

Assembly
Preheat oven to 350 degrees. For a 100-millimeter or 3 7⁄8-inch tart ring, cut a 135-millimeter or 5 3⁄8-inch ring of pâte sucré. Place ring on a greased or parchment lined baking pan, and press dough into ring. Repeat with remaining rings. Evenly divide the pear cream between the rings. Keeping the dough chilled as much as possible will keep it intact, as when it is warm, it becomes soft enough to mangle easily. Slice the pear lengthwise leaving the top uncut to allow the base of the pear to be fanned in the tart shell. Place pears in tart shells, lightly pressing to flatten, fan the slices. Bake for 25 to 35 minutes, or until the pastry shell and pear cream have a nice golden brown color.

Finish & Plate
Warm and thin the ½ cup apricot jelly and 2 – 4 tablespoon hot water in a small saucepan, then brush over the finished tart. Top with ¼ cup sliced toasted almonds and a dusting of about ¼ cup of powdered sugar.