A Fresh Take On Nostalgic Recipes

It’s difficult to imagine such a thing, but we may be witnessing a revival of the 1950s. Anyone who lived through those years will wonder how or why this is possible, but those who are too young to have been there may have “50s envy.” We saw it play out with the ‘70s and the ‘60s, and now it seems that the wayback machine continues its relentless march into the past.

There are signs everywhere of the decade: eyeglasses with oversized frames; high-top basketball shoes; fashionistas who turn up the bottoms of their jeans; big, clunky shoes. In the ‘50s we had the Korean War; today we have North Korean cyber-attacks.

Havana was big back then; today, everyone wants to visit Cuba and ogle those big American cars from the era.

Food in the ‘50s was, to put it politely, not memorable. It was a decade of highly processed food, casseroles made with unidentifiable ingredients, TV dinners, pink cakes and pink drinks.

Still, the decade gave us some dishes that have survived frequently under the label comfort food. And comfort isn’t all bad when modern sensibilities are applied. If you’re feeling nostalgic, here are six springtime recipes that evoke the decade without succumbing to its worst excesses and are still party-worthy. 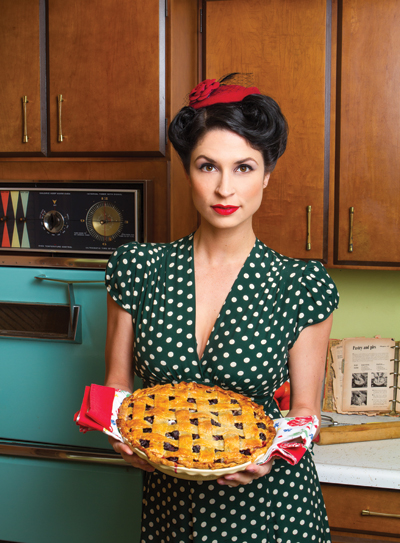 Homemade pies were a welcome antidote to the super-processed foods that dominated the ’50s, perhaps on the assumption that a good ending washes away previous sins.

In a mixing bowl, whisk flour and salt to combine. Cut butter into small pieces and add to bowl. Add lard and toss to coat both fats with flour. Using a pastry cutter, cut butter and lard into flour until mixture resembles coarse meal studded with tiny peas. Add water 1 tablespoon at a time, mixing with a fork, until dough forms a ball. Turn dough out onto a lightly floured surface and shape into a disc. Divide dough into 2 portions, one slightly larger than the other, form each into a disc, and wrap each in wax paper. Refrigerate for 30 minutes.

Place a heavy baking sheet in lower third of oven and preheat oven to 450 degrees. 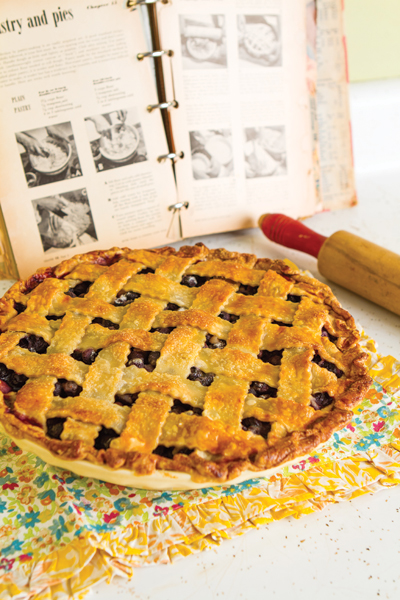 Place blueberries in large bowl. In a smaller bowl, whisk sugar, flour, salt, and lemon zest to combine. Add to blueberries and toss to coat.
Roll out the larger disc of dough to a circle about 10 inches in diameter and transfer to a 9-inch pie pan. Add blueberry mixture, then roll out the other disc of dough to fit pan. Pinch top and bottom crusts together and shape as desired.

Beat egg with water, then apply to crust with pastry brush.
Cut several slits in top crust. Place pie on baking sheet in preheated oven and bake for 10 minutes. Reduce heat to 350 degrees and bake until filling is bubbling and crust is browned, about 30-40 minutes. Cool pie on a rack. Makes 8 servings. 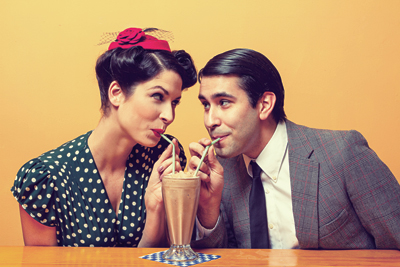 The world can be divided into people who like their chocolate milkshakes (or malts) made with chocolate ice cream and those who want theirs made with vanilla ice cream and chocolate syrup. I’m in the latter camp. This recipe is elevated by the use of a delectable chocolate sauce in place of the usual commercial syrup.

In a blender, combine milk and chocolate sauce and blend. Add ice cream and pulse until desired texture is achieved. Makes 2 milkshakes.

Fish sticks were ubiquitous in the ‘50s, part of a legion of bland, highly-processed foods designed to taste like something other than what they were made of. These catfish strips are the antithesis of that. 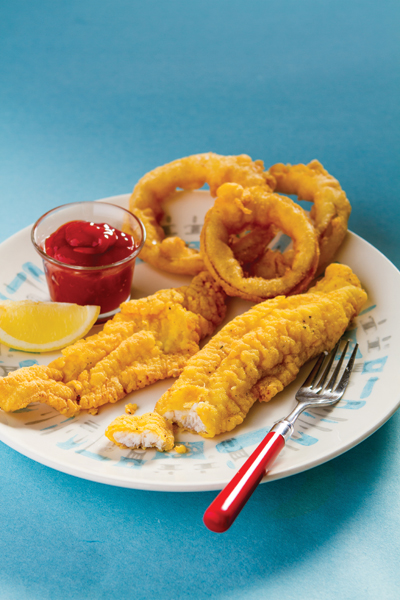 Combine milk and hot sauce in a large bowl or container. Combine cornflour, salt, and pepper in a rectangular pan or container. Cut catfish into strips about 1-inch wide and add to milk mixture.

Heat oil in fryer or deep pot to 375 degrees. When oil is at proper temperature, remove a catfish strip from milk, dredge in cornflour, and drop in the fryer. Repeat with additional strips of catfish, being careful not to overcrowd fryer. With tongs, remove cooked catfish from fryer and drain on paper towels. Repeat until all the fish is cooked. Serve with lemon wedges. Makes 4 servings.

Onion rings made from scratch bear no resemblance at all to those that have been battered, partially cooked and frozen.

Heat oil in fryer or deep pot to 375 degrees. Cut off ends of onions, peel and slice onions ¼-inch thick, and separate rings. In a large bowl, beat egg yolks with a fork, add club soda, and mix. Add salt and flour and mix lightly with a fork. Do not over beat. Mixture will be lumpy, which is okay.
When oil is at proper temperature, lift an onion ring with fork, dip in batter to coat, and drop into hot oil. Repeat with additional onion rings, but do not overcrowd fryer. When onion rings are browned on one side, flip to cook the other side. When browned remove from oil with tongs and drain on paper towels. Repeat until all onion rings are cooked. Makes 4 servings. 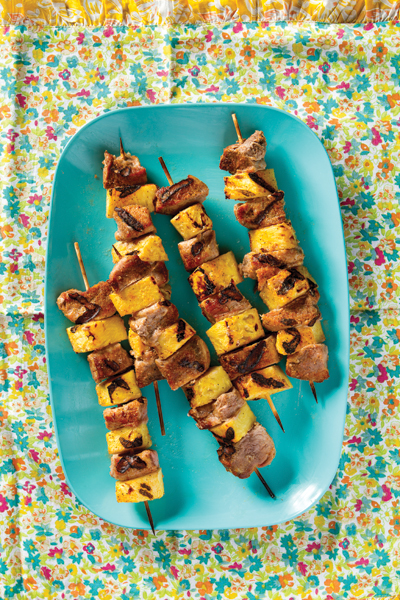 Preheat broiler or grill. Cut pork into 1-inch cubes and season generously with Cajun/Creole seasoning. Prepare pineapple by removing outer rind. Slice about 1-inch thick and remove core. Cut into cubes the same size as pork. Alternate pork and pineapple on skewers. Cook under broiler or on grill, turning occasionally until pork is browned and cooked through. Cooking time will vary depending on broiler or grill. Makes 4 servings. 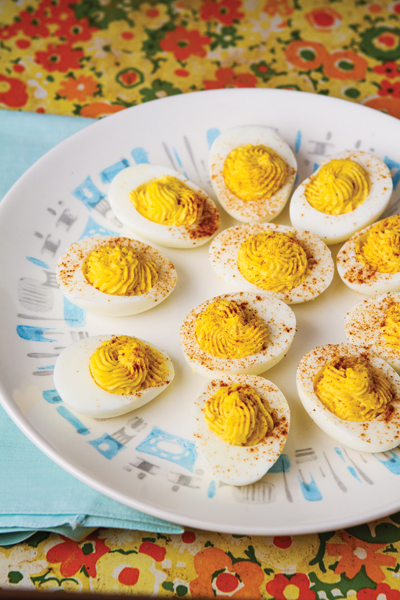 There are an untold number of ways to make deviled eggs; these have a Louisiana accent.

In a saucepan, cover eggs with water and bring to a boil. Cover pan, turn off heat, and leave eggs in pan for 15 minutes. Drain eggs, then shell them. Cut eggs lengthwise and remove yolks. Mash yolks and combine with mayonnaise and Creole mustard. Season with Cajun/Creole seasoning. Fill boiled egg whites with mixture and garnish with paprika. Makes 12 deviled eggs.