A Guide to Hunting and the Season

Called the Sportsman’s Paradise for good reason, Louisiana offers hunters diverse habitats ranging from salty tidal marshes to piney hills where they can pursue various species of game. Nearly 300,000 Louisiana residents hunt, spending more than $500 million a tear on their sport, according to a U.S. Fish and Wildlife Service survey.

Deer
About 200,000 people pursue whitetail deer in Louisiana, bagging about 250,000 animals each year. About one million deer roam the state today, according to the Louisiana Department of Wildlife and Fisheries (LDWF), but not very long ago, people seldom saw deer here. After two centuries of unregulated hunting and habitat destruction, the Louisiana whitetail population dropped to about 70,000 animals by 1900. Sportsmen pressured lawmakers to outlaw market hunting, establish seasons and limits and preserve remaining habitats. As recently as the late ‘60s, the sighting of a deer track in many forests made news. 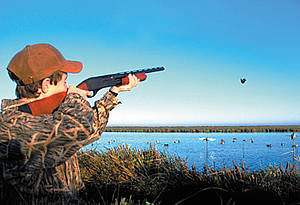 Carlin LeDoux of DeRidder, bags a gadwall in the marshes of Cameron Parish south of Lake Charles.

“In Louisiana, we restocked deer in the 1950s and ‘60s,” says David Moreland, recently retired LDWF Wildlife Division chief. “In ‘69, we made our last big deer release. In ‘70, we opened up most of the state to deer hunting. By ‘75, the entire state was opened as deer herds were beginning to build up.”

Today, hunters pursue deer throughout the state. The LDWF divides the state into eight zones, each with different seasons and regulations regarding how and when to hunt deer. (See the LDWF’s Web site for exact dates: www.wlf.louisiana.gov/hunting/seasons/deer.) About 35,000 Louisiana sportsmen hunt deer with archery equipment. Archers enjoy longer seasons and can often hunt areas off limits to others. Many hunters join clubs that lease private lands but sportsmen may also use about 1.5 million acres of public lands. 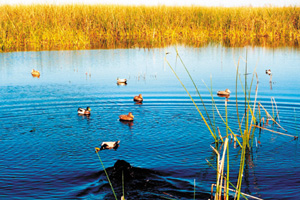 A dog fetches a duck among the decoys at the Lakes of Gum Cove near Lake Charles.

“Hardwood bottomland with adjacent agricultural property is generally the best habitat for producing big deer,” Moreland says. “The long-leaf flatwoods of southeast Louisiana don’t produce many deer. Swamp habitat can produce a lot of deer but pure cypress-tupelo swamps and marshes traditionally produce few deer. Deer may go into a salt or brackish marsh to some extent but that’s not what they prefer.”

The lush deltas of the Atchafalaya and Mississippi rivers create some of the best duck habitats in the nation. Atchafalaya Delta Wildlife Management Area (WMA) offers 141,000 acres of public hunting about 25 miles south of Morgan City. In the Mississippi Delta, about 30 miles downriver from Venice, people hunt the 48,800-acre Delta National Wildlife Refuge (NWR) and the 66,000-acre Pass-A-Loutre WMA. People might also hunt the 39,583-acre Biloxi WMA near Hopedale, the 17,095-acre Big Branch Marsh NWR on the north shore of Lake Pontchartrain or the 8,325-acre Manchac WMA near LaPlace.

In central Louisiana, Catahoula Lake near Pineville can host more than 500,000 ducks during some years, including thousands of canvasbacks. Not really a “lake” in the traditional sense, it resembles a grassy cow pasture for much of the year. During the fall, the state floods about 20,000 to 30,000 acres to create waterfowl habitat.
Goose season opens in the West Zone from Nov. 10 through Dec. 2 and again from Dec. 15 through Feb. 1, 2008. The East Zone opens from Nov. 5 through Dec. 2 and again from Dec. 15 through Jan. 27, ‘08, with a daily bag limit of 20 snow, blue or Ross geese and two specklebellies. Since geese prefer agricultural lands, many people hunt the rice fields of southwestern Louisiana or flooded croplands between Alexandria and the Mississippi River up to Monroe.

“Big agricultural complexes, such as flooded soybean fields or rice fields, attract large numbers of geese,” says Robert Helm, an LDWF waterfowl biologist. “Geese tend to follow agricultural fields. Wherever there is rice, geese will go. There are a few places to hunt geese in agricultural fields along the Red River to Natchitoches but the numbers are relatively small.” 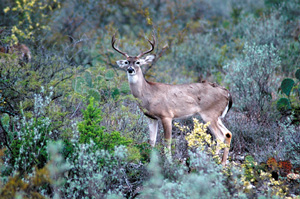 “Cottontails are more widespread but we do have some overlap throughout the state,” Kimmel says. “Cottontails are mostly around the pasture borders, forest borders and clear-cuts. For cottontails, hunters look for weedy brier patches and woody cover or underbrush. Swamp rabbits are more in the wetlands and wooded bottomlands.”

Most sportsmen pursue rabbits with dogs, mainly beagles. They release the dogs in thickets and wait for rabbits to run past them. People who don’t own dogs can try to jump rabbits by kicking clumps of grass or downed logs or smashing through brier patches.

Birds
Upland birds, such as doves, bobwhite quail and woodcock, attract a small yet fervent following. Some people travel from state to state to follow their pointing dogs in pursuit of these elegant birds. 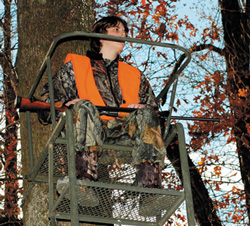 The Sept. 1 dove season opener traditionally kicks off another hunting season. Although the three-way split season runs into January, many people only hunt doves during the opening weekend or two. In some places, friends and family gather for traditional dove shoots. Sportsmen take to the fields to bag birds and then remain with their hosts to enjoy barbecued bird and beverages.

Like the dove opener, quail hunts become top social events. Quail season runs from Nov. 17 to Feb. 29, 2008. People may bag up to 10 birds per day. Quail hunting once defined the luxurious southern plantation lifestyle; gentlemen sportsmen attired almost in formal wear followed dogs either on foot or horseback. In some places, mule-drawn wagons transported sportsmen to the fields and back. However, native quail populations suffered setbacks across much of the South including Louisiana.
“Quail populations have been declining in much of North America since the early 1900s due to a variety of reasons,” says Wes Burger, a quail expert at Mississippi State University. “From ‘66 to today, quail populations declined an average of four percent per year or about a 70-percent decline of bobwhites over the past four decades.”

Many people blame increasing numbers of predators and egg-eaters for contributing to declining quail populations. Skunks, raccoons, foxes, feral cats, bobcats, opossums, snakes and fire ants destroy between 50 to 70 percent of all bobwhite nests. In about 25 percent of those cases adult birds also die. Only about 50 percent of quail chicks survive their first three weeks.

Bobwhite quail occur in varied habitats from tall grass prairies and brushy rangeland to pine forests. They prefer “successional” grasses, those that emerge after something disturbs the soil to create an opening. They don’t do well in thick forests with little undergrowth but thrive in some crop fields, as long as they can find edge cover from weeds and grass clumps, briers or woody thickets. 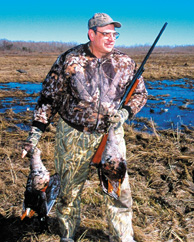 In some winters, Louisiana harbors about 70 percent of the North American woodcock population with most of those birds going into the Atchafalaya Basin between Lafayette and Baton Rouge. Although most of the Basin remains in private hands, Sherburne WMA offers 43,617 acres of prime public woodcock habitat. Woodcock season runs from Dec. 18 through Jan. 31, 2008, with a daily limit of three.

Weighing only a few ounces, the long-billed brown birds tend to hold almost until someone steps on them before exploding into people’s faces. Hunters instinctively jump back, not knowing whether to shoot, run, climb a tree, pray or all of the above. Fortunately, woodcock seldom fly far. They often land in another thicket less than 100 yards away; with careful spotting, hunters could jump them again. Such exciting action endears these diminutive feathered firecrackers that can zip through trees like radar-guided smart missiles to upland hunters.

Shorebirds related to sandpipers, snipe resemble woodcock and offer similar challenging wing shooting. Mottled brown and grayish in various shades with stripes and flecks of white, snipe prefer open country such as marshes and wet fields to the thick bottomlands where woodcock dwell. Both use their long bills to probe for worms or other invertebrates in soft, wet dirt. Snipe season runs from Nov. 3 to Dec. 3 and from Dec. 15 to Feb. 28, 2008, with a daily bag limit of eight. 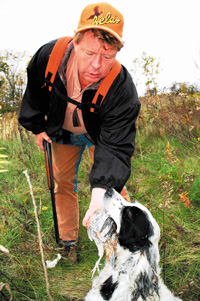 John Martin accepts a bobwhite quail he shot from his dog.

To hunt snipe, sportsmen spread out through a moist field or marsh at intervals just out of shotgun range. As they walk, they kick up the winged rockets that scream with harsh, distinctive, yet indescribable, screeches as they flush. Like woodcock, snipe fly swiftly and erratically but not for long. Hunters can frequently keep jumping them.

Unlike snipe or woodcock, rails and gallinules don’t fly fast or erratically but they do offer liberal bag limits. With short, stubby wings and long legs, rails prefer to run through thick marsh grass than to fly and they seldom fly very high above the marsh grass. Louisiana sportsmen may bag up to 25 Virginia and sora rails, 15 common or purple gallinules and 15 king and clapper rails for a total of 55 birds a day! Rail and gallinule season runs from Sept. 15 to Sept. 30 and again from Nov. 10 through Jan. 2, 2008.

Also called marsh hens, clapper rails inhabit salt marshes. More often heard than seen, they make clattering, clucking sounds. Somewhat larger, king rails prefer freshwater marshes, swamps or river and lake shorelines. About half the size, Virginia rails look like scaled down versions of king rails. Sora rails, the smallest and most widely distributed rail in North America, look more like a cross between a quail and a sparrow; about as big as a meadowlark, they have short chicken-like bills and live in both salt and brackish marshes.

Few people intentionally hunt rails or gallinules. They might shoot some they spot walking the mudflats at low tide or flush them while walking through marshes. Some people poll or paddle shallow-draft boats across these grassy flats to hunt gallinules and rails.

Just about anywhere in the Sportsman’s Paradise, people can find some hunting action this fall. For more specific guidance on hunting seasons, laws or limits, see the LDWF Web site at www.wlf.state.la.us.