The Best of What's New Around the State 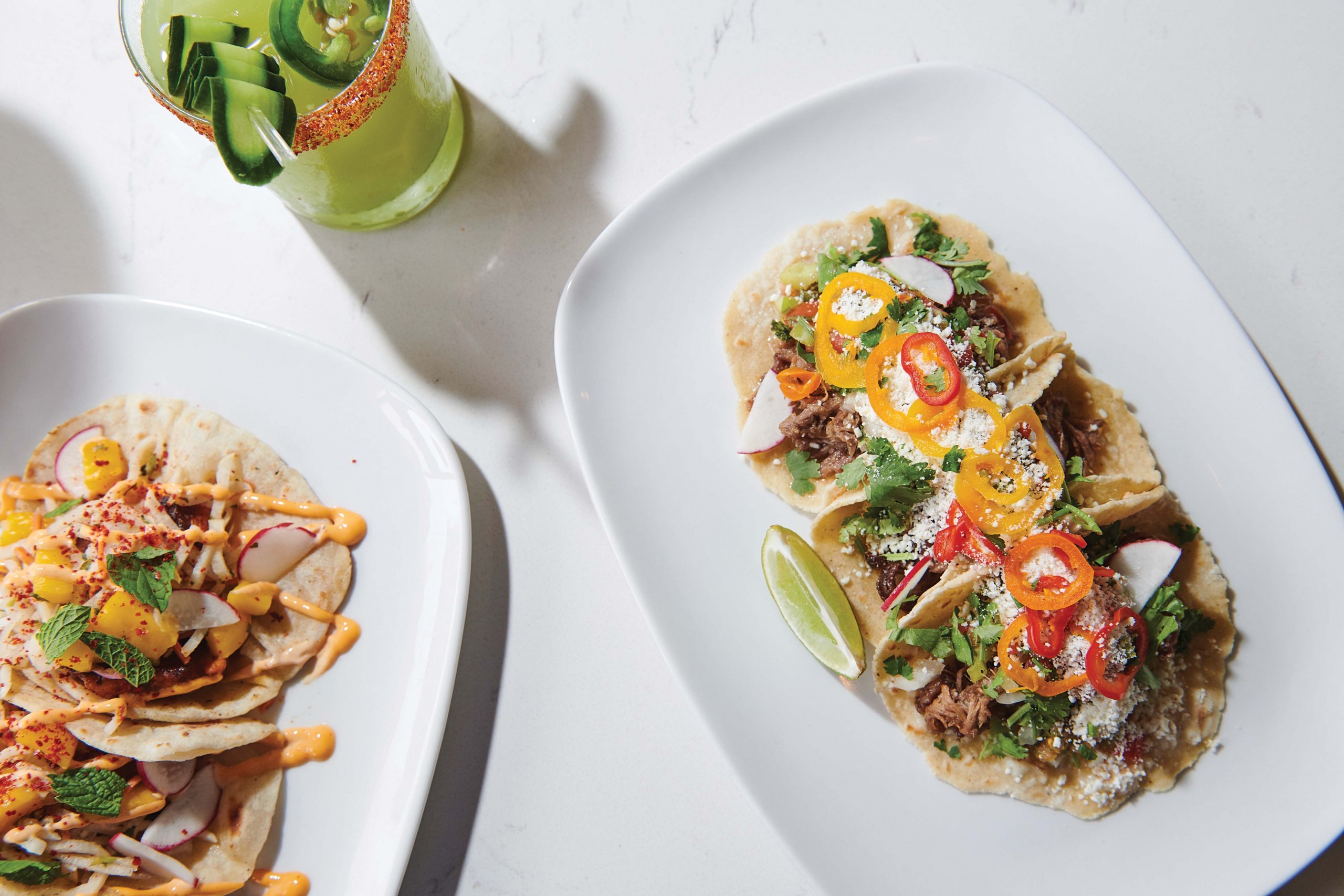 Nothing stops the innovators, trailblazers and entrepreneurs of Louisiana. Last year may have taken the wind out of our sails with hurricanes, freezes and a worldwide pandemic, but the Bayou State never faltered in producing new and interesting products, culinary offerings and unique ways to enjoy Louisiana. Here’s what happening these days with the remarkable people who call Louisiana home and the exciting ideas and products they produce. We’re excited to shine a light on their successes with our annual La Nouvelle Louisiane 2021.

It has been a year of staycations, which bodes well for Louisiana, one of the finest states to visit, even if it’s home. 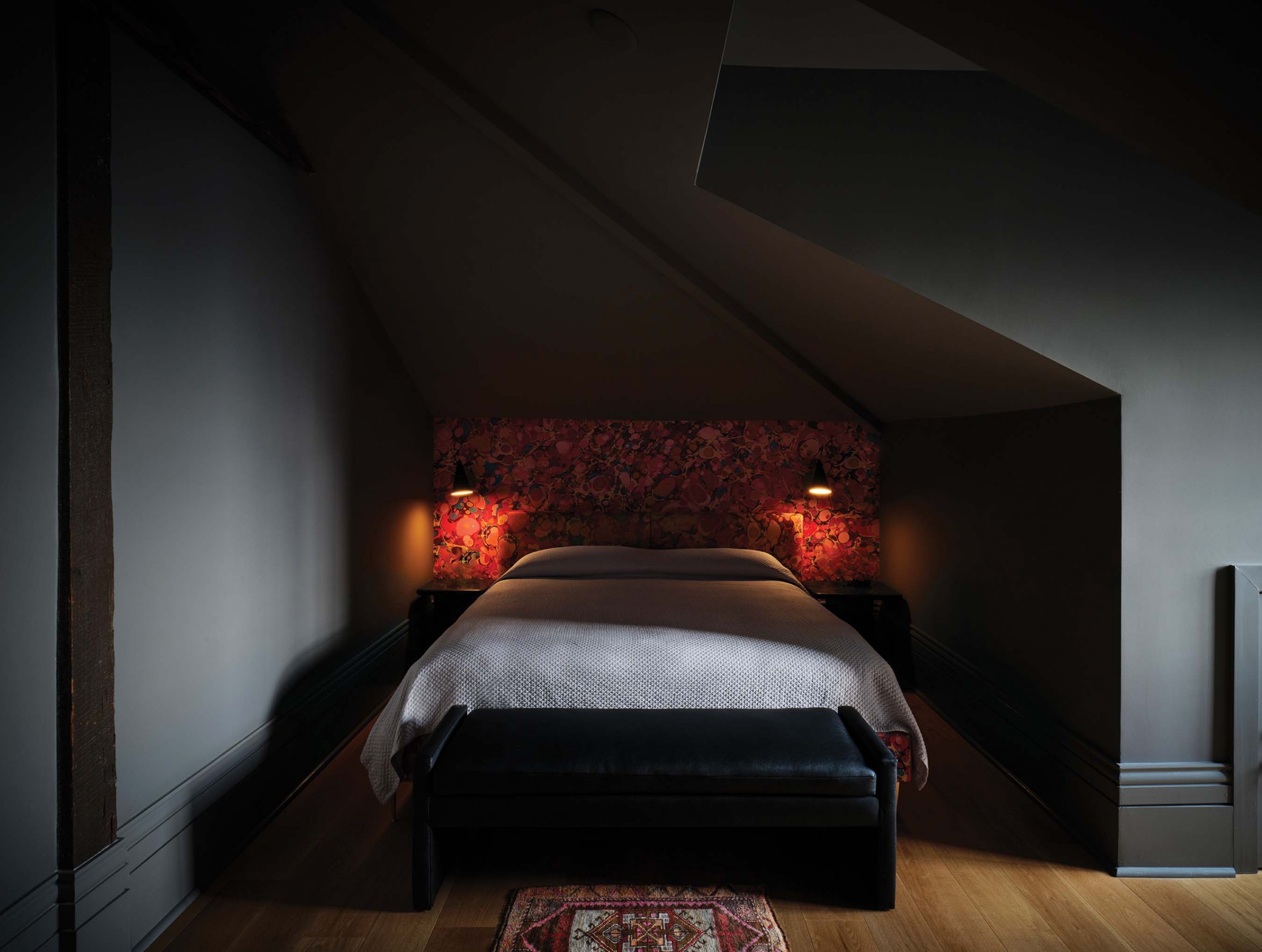 The massive building at the corner of Magazine and Race once housed orphans, thanks to the generosity of philanthropist Margaret Haughery. Today, the 1861 building houses visitors as Hotel St. Vincent. The boutique hotel offers 75 elegant guest rooms, a courtyard with pool, San Lorenzo restaurant serving coastal Italian specialties, the Paradise Lounge and Elizabeth Street Café. Guests will be reminded of the building’s storied past at the guests-only Chapel Club, once the orphanage chapel. saintvincentnola.com

BATON ROUGE
The Cook Hotel offers guests a boutique hotel experience on the LSU campus and its recent multi-million-dollar renovation earned it a place on Southern Living’s “Best Southern Hotels in SEC College Towns in 2020.” thecookhotel.com

MONROE & WEST MONROE
Heron Outdoor Sculptures
Monroe-West Monroe solicited sponsors and artists to decorate heron sculptures around town and the response was enormous. There is now a scattering of 87 sculptures throughout the twin cities, with the styles varied and unique. The money raised in partnership with the Downtown Arts Alliance flows back into the community through arts programs. heronson-thebayou.com

COVINGTON
You’ve seen them wandering the streets of the French Quarter, but now the mule-drawn historical carriage tours of New Orleans are available on the Northshore. neworleanscarriages.com/tours/historic-downtown-covington-tour

STATEWIDE
Our state parks offer cabins, RV and tent sites and primitive camping. Now visitors can enjoy glamping, a mix between sleeping on the ground and the luxuries of a full cabin. lastateparks.com/glamping 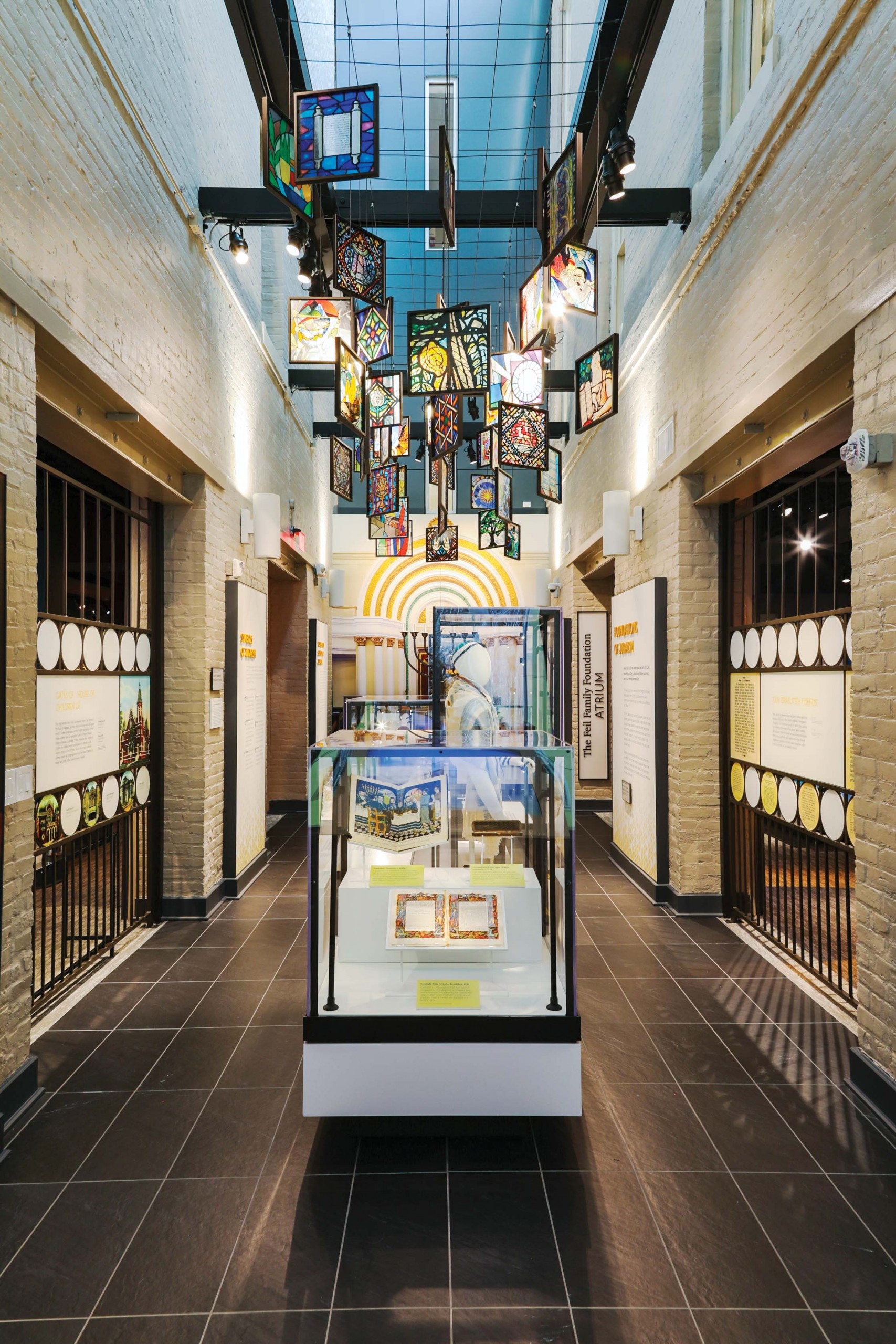 Museum of the Southern Jewish Experience

New Orleans
After years of preparation and a relocation from its home base in Utica, Mississippi, this latest New Orleans museum opened in May, showcasing the unique attributes and contributions of Southern Jews as well as the impact of Southern culture on Jewish life. Permanent and changing exhibits — an expansion from its original Mississippi museum — cover 9,000 square feet on two floors of the museum’s Howard Avenue building, plus the museum plans to offer special events throughout the year. The grand celebration was slated for this fall, but had to be postponed due to the pandemic. It’s currently open Wednesdays through Mondays. msje.org

Carousel Gardens and the amusement park

New Orleans
It wasn’t just kids who were smiling this summer when Carousel Gardens reopened in City Park. In addition to those fun 18 rides and the historic Wooden Carousel, the park features two cafés. neworleanscitypark.com/in-the-park/carousel-gardens

Shark Discovery at the Aquarium

New Orleans
Forget Shark Week. Visitors can now get their shark fill every day at the new 13,000-gallon touchpool with numerous shark and ray species, plus a massive interactive LED screen. audubonnatureinstitute.org/aquarium

Vivian
The Vivian Railroad Station Museum tells the history of the town named for the founder’s daughter, Vivian. It reopened this year with new exhibits, part of north Louisiana’s Boom or Bust Byway. shreveport-bossier.org/listing/vivian-railroad-station-museum/901/

Louisiana continues to serve up innovative culinary delights and we’ve got several new restaurants throughout the state to prove it. 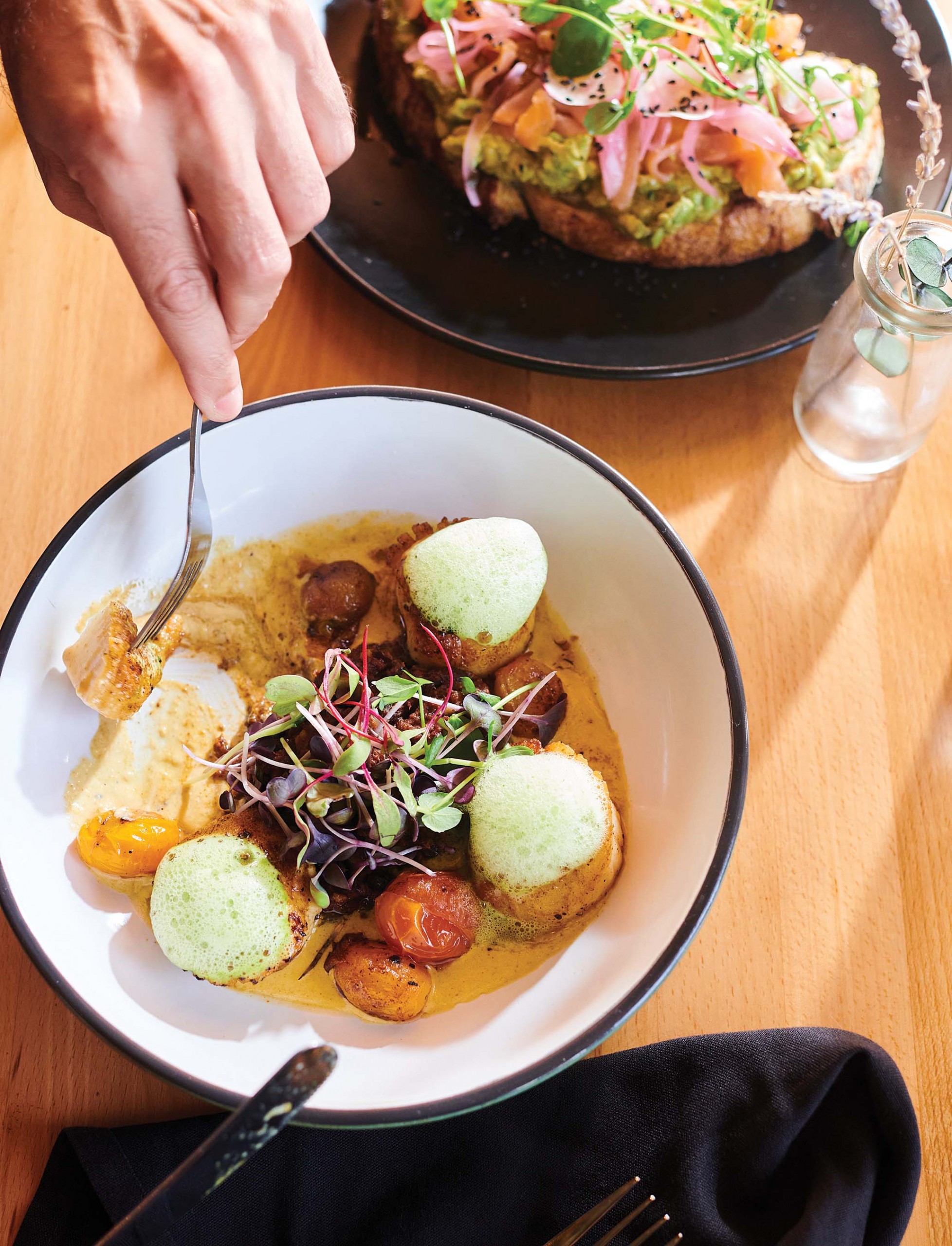 Lake Charles
Artisan Bistro, opened The James 710 in April, an upscale casual restaurant in Lake Charles garnering rave reviews. The innovative menu and unique atmosphere brings “a new flair of dining to the area, something we all need after this past year,” said Kathryn Shea Duncan, media relations manager of Visit Lake Charles. The restaurant is named for Herrera’s grandfather James with the interior décor a nod to Herrera’s Colorado roots. Visitors can nosh on modern American dishes with Asian and Latin influences and sip craft cocktails inside the uniquely designed building or on the expanded patio. “Everything we do has a little twist on traditional dishes,” Herrera said. thejames710.com

Madisonville
Dock your boat on the Tchefuncte River and choose between the casual Anchor restaurant downstairs or delicious fine dining at Tchefuncte’s upstairs, both helmed by Chef Michael Gottlieb. tchefunctes.com

Lafayette
This newcomer to the Lafayette culinary scene — located near the University of Louisiana campus — offers a unique take on contemporary Parisian fare, such as vichyssoise, duck confit and blanquette de veau. janesfrenchcuisine.com

In early 2020, the world went into lockdown and Toups’ Meatery was forced to close, but the pandemic didn’t stop chef-owner Isaac Toups from working. He offered meals to restaurant and service industry workers, creating dishes from whatever he had on hand, pulling together meals from assortments of odd ingredients. “It was like an episode of ‘Top Chef,’” Toups said with a laugh. Word spread of his generosity and by the height of the pandemic Toups was serving 500 meals a day. It all happened through volunteers, donations and crowdfunding. “There is no back to normal,” Toups said, but that doesn’t mean he’s not at the ready for the next problem. “What happens next? That depends on what is needed for me next.” toupsmeatery.com

Word got out fast when Dripp Donuts food truck hit the streets. They serve up craft sourdough donuts with fun flavors like white chocolate macadamia, candied bacon, salted lime, Oreo cheesecake and more. These are homemade creations, thicker and richer than your typical glazed donut, which has folks in Shreveport talking. “It seems like they were the new kids on the food block one day, and the next day, they were dominating social media,” said Shalisa Roland, public relations and digital content manager for Shreveport-Bossier Convention and Tourist Bureau. “They’re truly scrumptious.” Follow them on Facebook for locations. drippdonuts.com 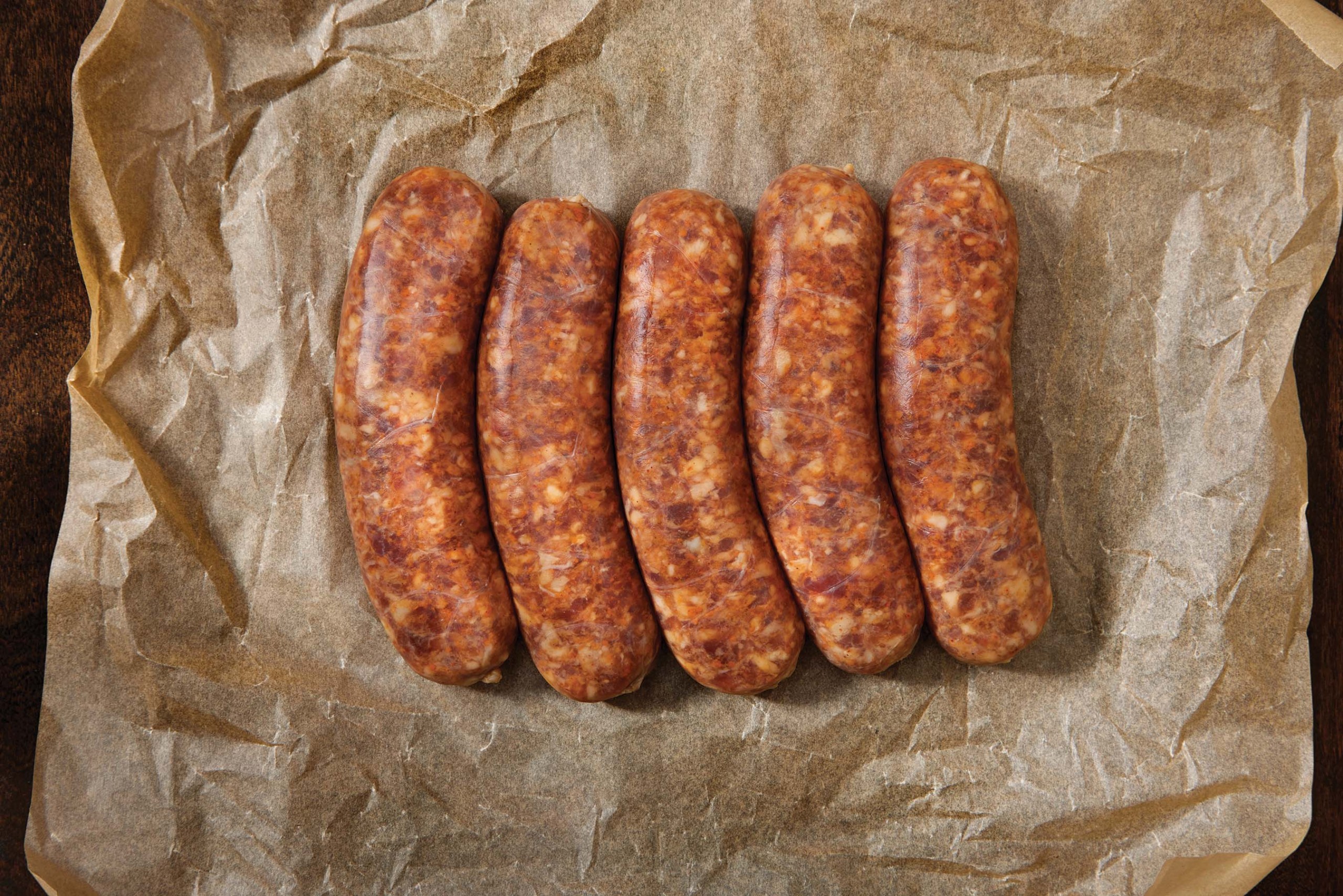 RIVER PARISHES
Travel upriver from New Orleans through the “River Parishes” and you’ll find plantations, quaint towns and andouille. Which is why the region’s tourism arm created this unique culinary byway to celebrate the beloved product that’s used repeatedly in Louisiana’s Cajun and Creole cuisine. There are 37 sites to visit along the trail, from St. Rose to Convent, with a host of great eating in between. Visitors may even enjoy Spuddy’s Cajun Cooking Experience to learn how to use andouille back home, in addition to sampling some of Maitland “Spuddy” Faucheux’s andouille specialties. andouilletrail.com

Western Louisiana
The Gas Station Eats trail of “No Man’s Land,” the region situated on the western edge of Louisiana, highlights culinary delights in roadside stops such as gas stations, convenience stores and casual eateries. visitnomansland.com/plan-your-trip/gas-station-eats

Houma/Thibodaux
“Wander off the Eatin’ Path” is how tourism encourages folks to sample the trail’s culinary specialties. In addition to city restaurants, there’s a host of great eating in smaller Cajun communities. lacajunbayou.com/foodtrail 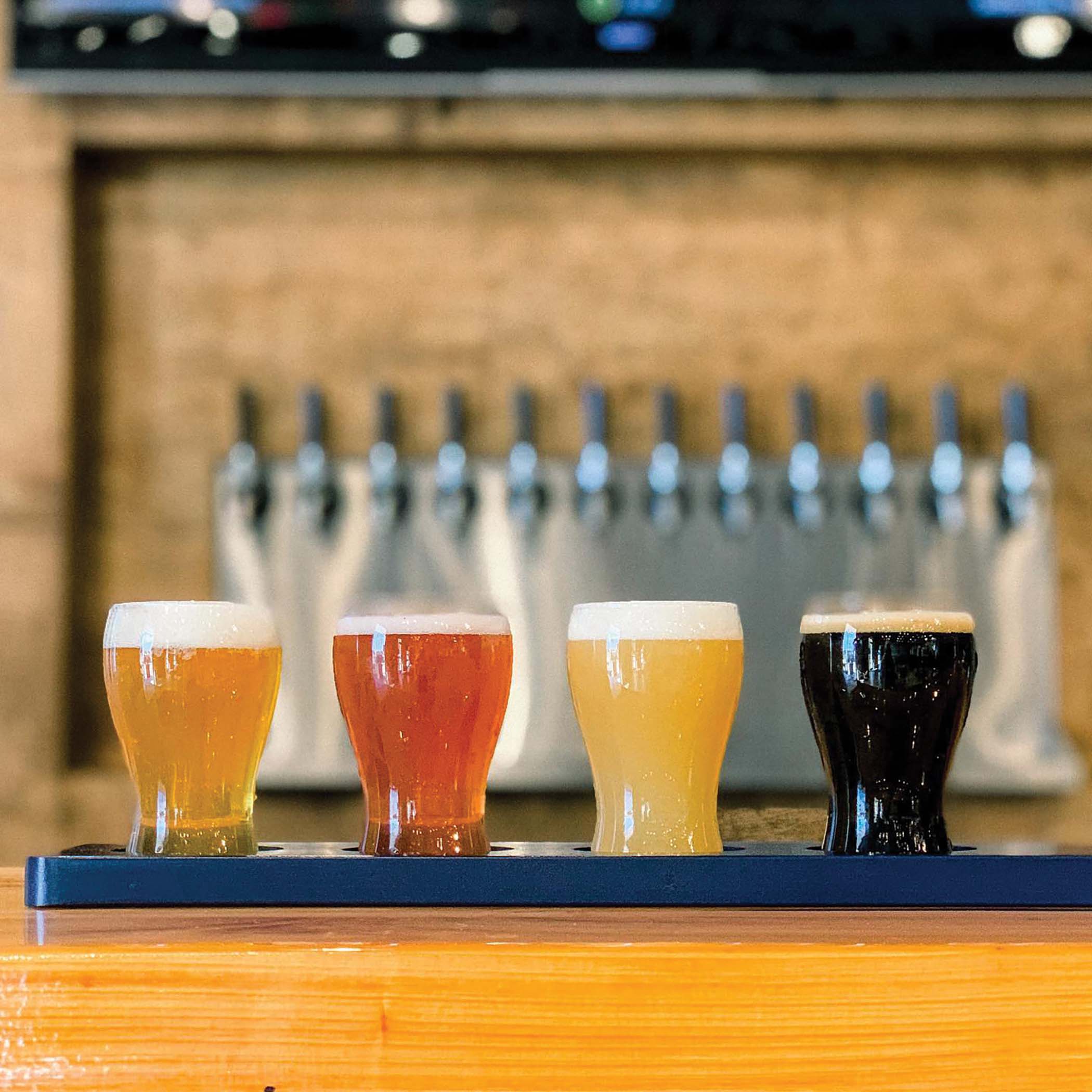 Baton Rouge
Baton Rouge neighbors Justin Meyers and Caleb Schlamp love to make beer, and last year the home brewers decided to move that passion up a notch, opening Cypress Coast Brewing on Government Street in the Mid-City neighborhood. They offer a rotating tap, which means visitors can drink a Belgium brew one day, a hazy IPA another. “We started as home brewers so we don’t do anything consistently,” Meyers said. Since opening in September 2020, the taproom has become a neighborhood hangout, with food trucks on Sundays. Meyers hopes the future will include more events, such as trivia night and hosting live performances. cypresscoastbrewing.com

St. Gabriel Sugar Farms offers a bit of everything — a restaurant, drive-in theater, art gallery and yes, a brewery. Enjoy farm-to-glass micro brews in the taproom and grab a pizza in the process. sugarfarmsla.com

Shreveport The Seventh Tap is Shreveport’s newest craft brewery, created by three friends who decided to take their home brewing expertise to the next level. They opened their fun taproom in June. theseventhtap.com

New Orleans Enjoy a variety of craft brews made on-site from five tanks while viewing artwork from local artists. The full-service restaurant serves up gastropub, Cajun and Vietnamese cuisine. bywaterbrewpub.com

Michael Frugé grows rice for a living — the fourth generation to do so — but he uses his crops for more than a base for étouffée. Frugé makes a smooth vodka from rice, what he calls “farm to bottle, grain to glass,” and it’s been winning awards ever since he started. jtmeleck.net

NEW ORLEANS
Who’d have thought New Orleans would have its own sake brewery, but why not? Consider how much rice we produce. Wetlands makes both traditional sakes and sparkling versions with flavors. wetlandssake.com

Our people continue to make us proud, whether in-state doing great works or out in the world representing the Bayou State. 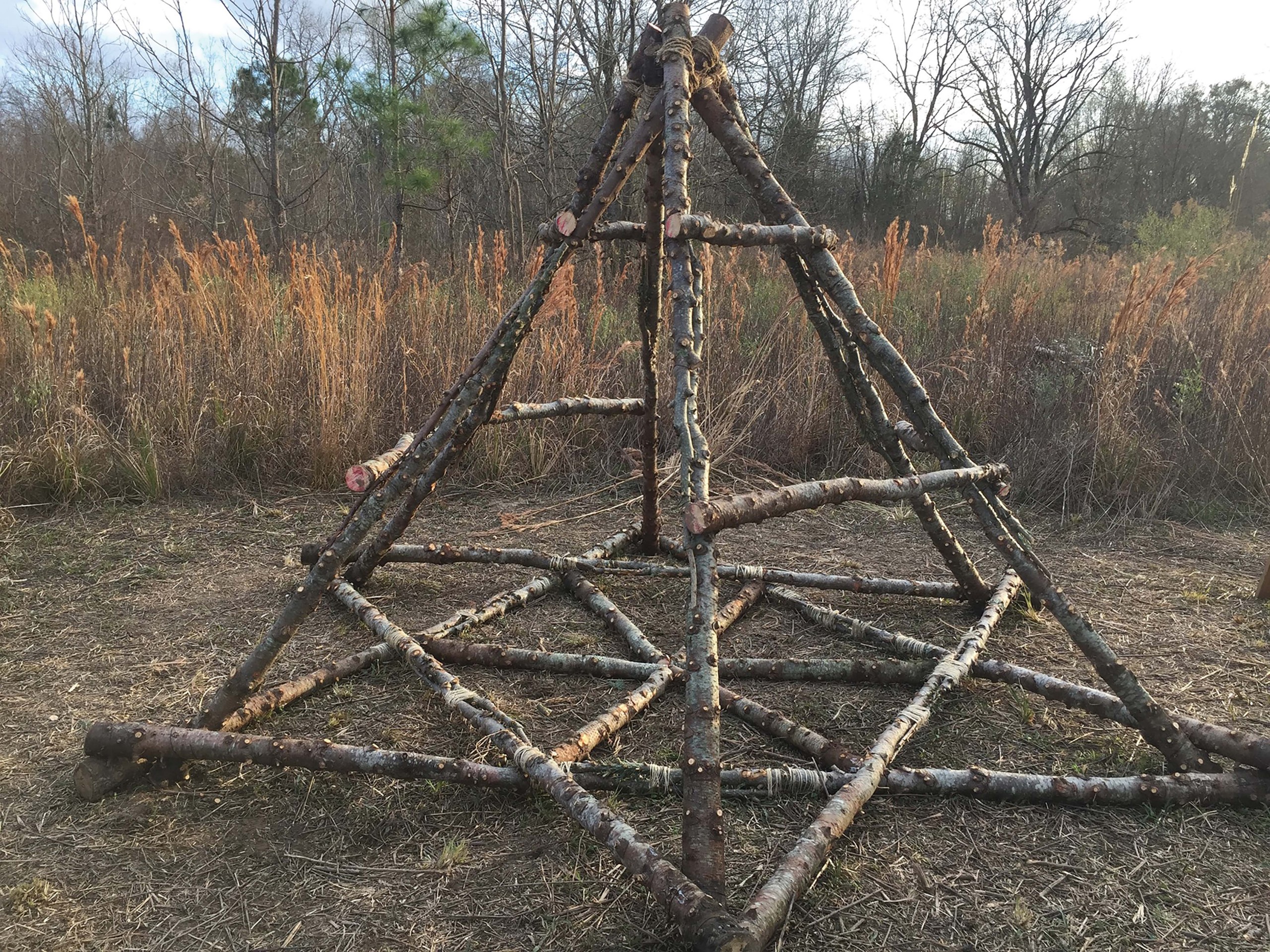 This Acadiana nature preserve and eco-education campus aimed at inspiring people to steward the natural environment is inching closer toward federal nonprofit status; they filed articles of incorporation this summer and are busy collecting grants. Be sure to visit for the annual Halloween Nature and Art Festival on Oct. 30, a family friendly event that offers science education with a Halloween bent. This year’s theme is “Plants vs. Zombies.” atelierdelanature.org

Teche Center for the Arts

Breaux Bridge
TCA began in 2014 in a 1940s-era movie theater in downtown Breaux Bridge and has been gaining steam even since, bringing a wide variety of arts to the heart of Acadiana. artsatteche.com 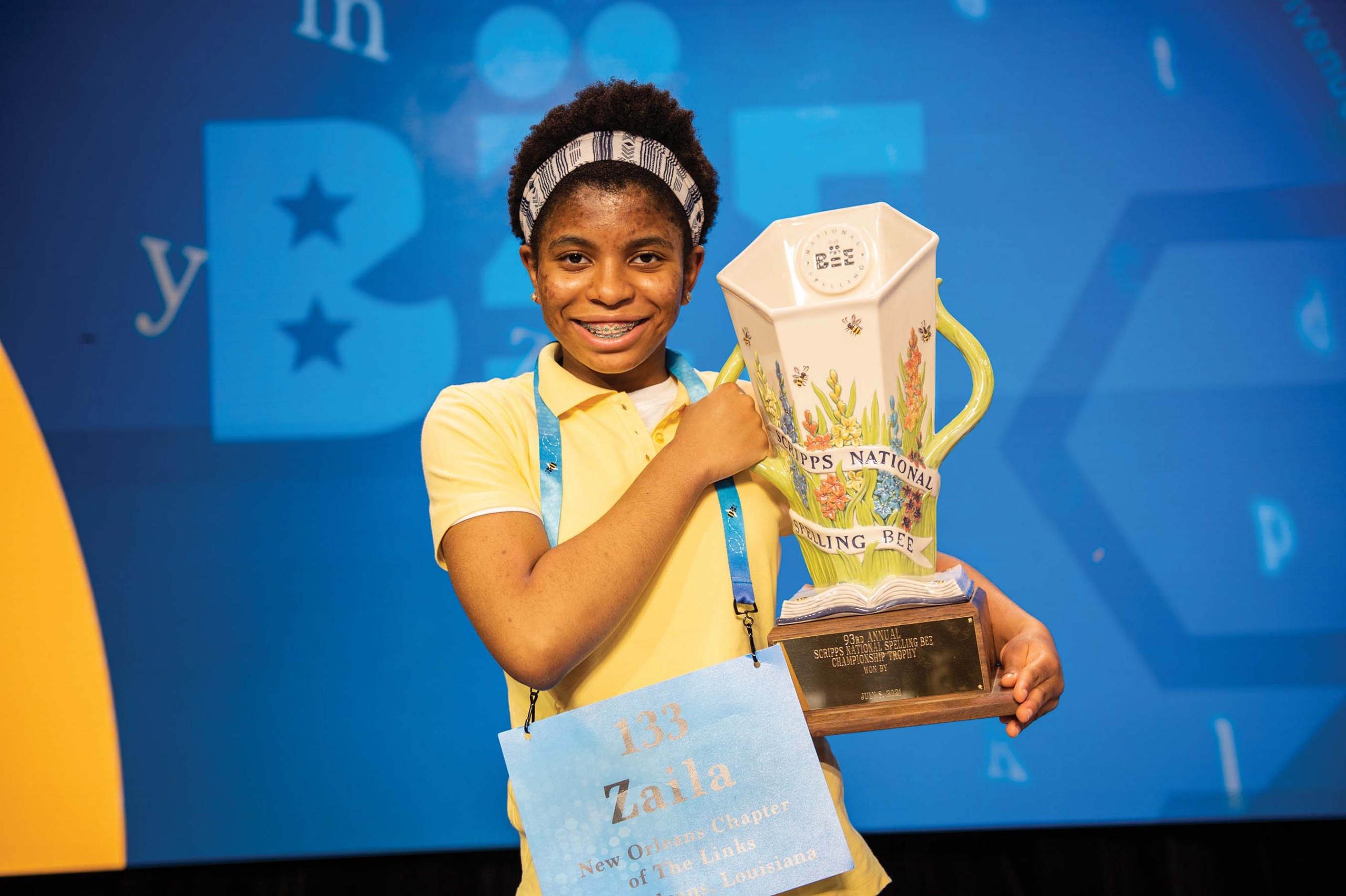 We can’t spell half the words that National Spelling Bee champion Zaila Avant-garde conquered in the recent Scripps National Spelling Bee. The 14-year-old from Harvey not only spelled “murraya” correctly to become the first African American winner in the 93-year history of the competition, but she’s also in the Guinness World Records for basketball dribbling and juggling multiple balls. We’re so enamored with this young lady, we can’t wait to see what’s next for this little ball of fire.

NEW ORLEANS
Jon Batiste’s latest single and video, “Freedom,” showcases New Orleans at its finest and gives us a lift we so desperately need. We can’t stop watching it.
jonbatiste.com 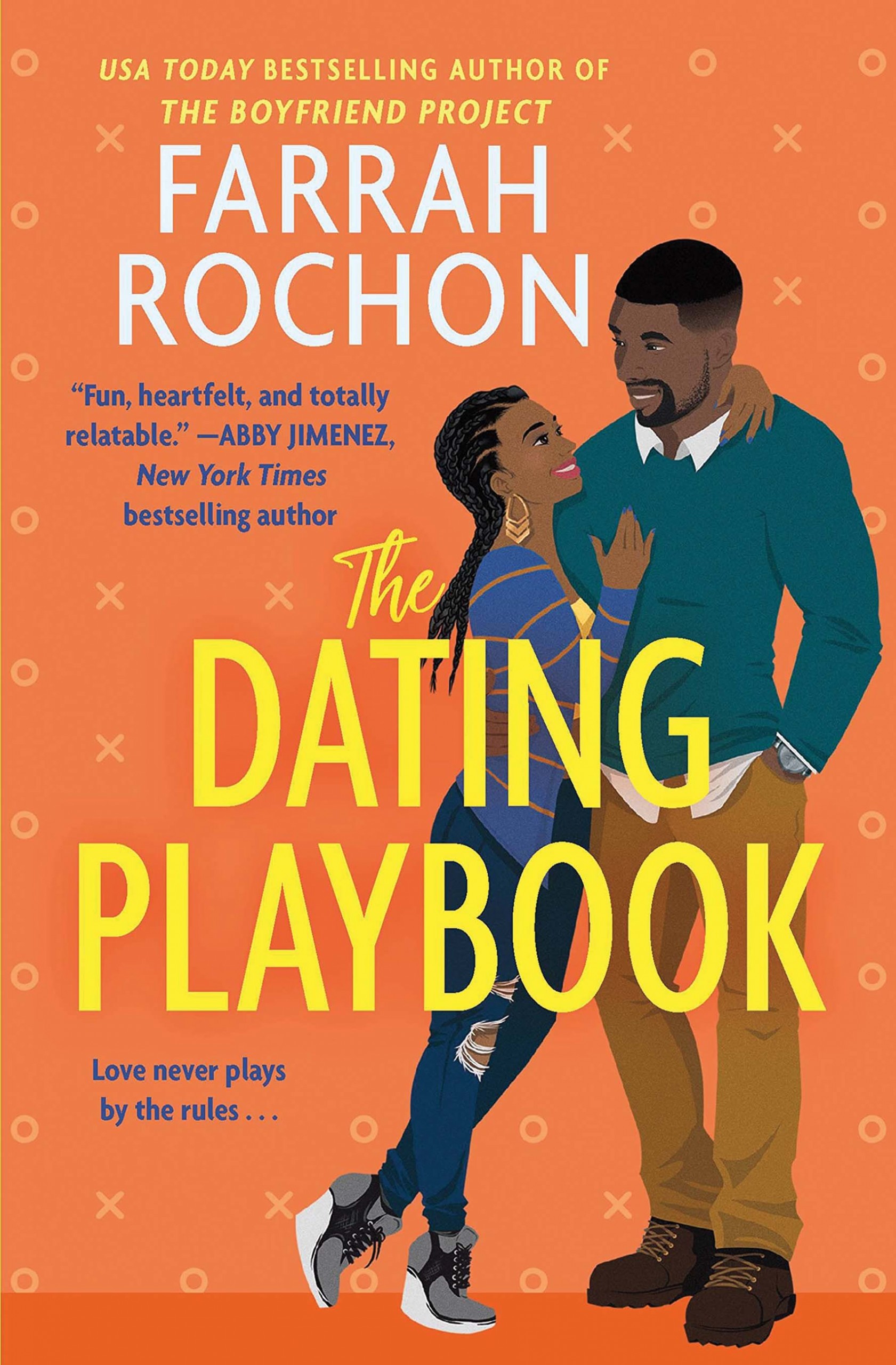 This Louisiana native has been steadily climbing the charts. Her books have topped the USA Today bestselling list, and “The Boyfriend Project,” a contemporary romance about three women and the lousy boyfriend who cheats on them, was listed as Best Book of the Year from NPR, Cosmopolitan, Buzzfeed and others. Oprah Magazine named it one of the “Must-Read Black Romance Novels” of 2020. Look for Farrah’s latest, “The Dating Playbook.” farrahrochon.com

Lafayette
The prolific designer, illustrator and author publishes her award-winning mythical children’s book, “Moonsong,” this fall, and was appointed official artist for the 2021 Festivals Acadiens et Créoles (which was rescheduled for spring 2022). denisegallagher.com

Lafayette
Gould photographed the first edition and cover of Louisiana Life and has published numerous books since. His latest stunning photo tome is “Bridging the Mississippi: Spans across the Father of Waters.” philipgould.com

New Orleans
Fry offers a unique glimpse into the people of the Mississippi River batture in his latest book, “They Called Us River Rats: The Last Batture Settlement of New Orleans.” upress.state.ms.us/Books/T/They-Called-Us-River-Rats

We applaud our southwestern city for its perseverance and resurgence after a trifecta of weather disasters. Hotels and restaurants have reopened, events have returned — all during a pandemic, no less. It’s still a long road to recovery and we encourage readers to keep up the support. visitlakecharles.org