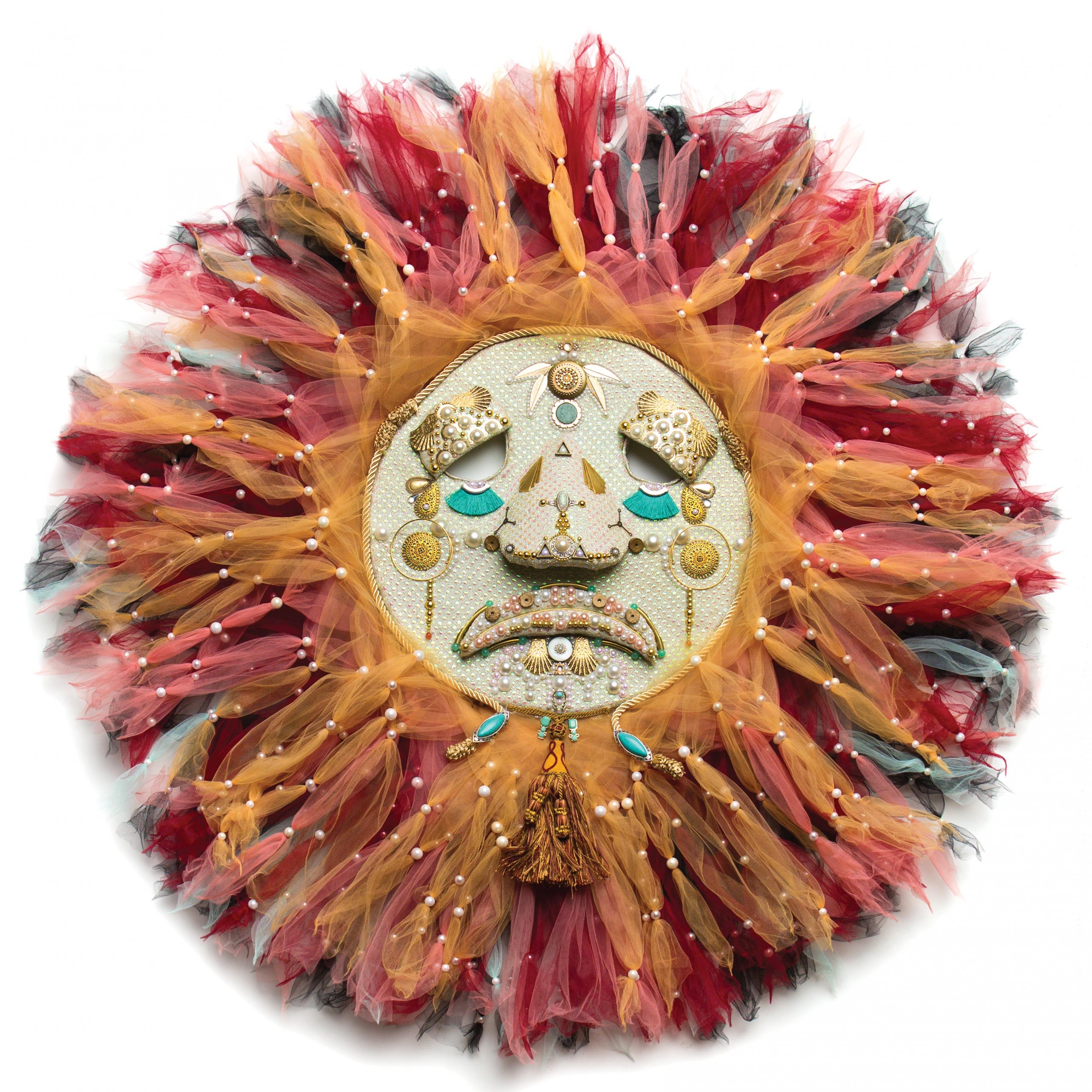 It’s an epic, bejeweled beast of folkloric proportions. Or else it’s a mischievous, spinning sun prop escaped from the set of a children’s TV show and loose on the sidewalks of New Orleans. Whatever it may be, it’s certainly 10 feet of electric skin, all patchworked fabric and ornamental trappings and foraged flora like clever detours of design ambling through the artsy Bywater neighborhood.

At the controls is bespoke mask-maker Basqo Bim, tucked inside of this wild assembly, but joking and gesturing with all the charisma of a carnival, cutting it up with every local and tourist passing by and those stopping to gawk and squawk.

“I would hope it’s not unapproachable, and that they would get a kick out of it,” Bim says of the daydream of an idea hibernating in his brain until the time is right to sew this seed. When the coffee is on and the dogs are walked, when he’s fully immersed in thought, when Mingus is blasting, when Russian Orthodox artists and medieval jesters and Sandinista revolutionaries come out to play, and he can swim deep in his river of influences once again.

“The goal always is to bend reality, to make what I see in my head and put it out in the world,” Bim says.

And, really, is that too much to ask?

Now 36, Bim didn’t become an artist until he hit 30, while he was toiling in an office job and received a strong challenge from his younger brother, Fernando, an artist who died in 2021.

“He was my younger brother and my best friend, and one day he said, ‘But what do you do? This is it?’” Bim recalls. “He put me in a tailspin, I realized I didn’t have much to show for the last decade.”
So he began sketching, then making detailed illustrations, then embroidering his own designs. While living in Portland, the brothers produced a massive grim reaper puppet requiring three operators to tower over the crowds at rowdy anti-Trump demonstrations. “That was all about bringing our own energy and creativity to that moment,” Bim says.

It wasn’t until he relocated to New Orleans four years ago to live with his partner and work in the film industry that Bim’s art evolved into intricate mask work. The opulent energy of the Mardi Gras Indians made an instant impression. “I felt that in my bones,” he recalls.

This is a city of mask lovers. In a time of mask wearing. Bim’s art is somehow both stratospherically tethered to that and yet far more elusive.

Last fall, contemporary art gallery The Front hosted a collection of his work, alternate reality masks and headpieces that caught the attention of well-heeled revelers and ribald denizens of the Crescent City alike. It was Bim’s first experience with being recognized “from Instagram.” A weird feeling, he admits.

“If you come into this town even briefly, and you don’t walk away a changed person, I don’t know what happened, you know?” Bim says. “For me, the influence has been very direct.”

The designer also draws inspiration from his parents’ birthplace in Colombia. That country’s rich boldness of color and decoration is felt in every mask. Similarly, past psychedelic experiences taking mushrooms and DMT have helped him push his art beyond the ordinary.

“Hallucinating made me realize that every object has an outline,” he recalls. “And that you can always go further and further with the details of things, and that’s something I like to take with me to creating.”
Pena is at work on a new batch of masks, each with its own history and legend and power — world-building, he calls it — but Bim has his eye on full creature creation and animatronics, too, perhaps for films.

Like the costume lineage of the tricksters that kept both kings and kindred commoners in good spirits for centuries, Bim’s masks encourage a closer embrace of playfulness and giving chase to whimsy, a collective time for dreaming while awake, and for celebrating the colors of the world in brand new ways — whether there is an official Mardi Gras or not.

The creative’s work is more fundamental to that pursuit than any city proclamation.

“My hope is that putting on my masks will initiate with their childlike hearts,” Bim says. “That it’ll pull something out of them that’s already there and has just been buried.”

When you’re not creating, what do you enjoy doing in Louisiana?

For me, it is extremely important that an outsider learn the history of a place if they decide to visit or live there. I love spending time at the libraries. I watch a lot of New Orleans-centric documentaries and films. I love exploring new areas on foot. Sometimes we will grab a six pack and our dogs and go down to the bayou to watch the sun set, or take them to the river or the lakefront. Going to my favorite spot to get red beans on Monday, even though I make my own every week. Talking with the folks at my corner store every day or two, chatting with the neighbors.

If you could design a custom mask for anyone, who would it be and why?

I think Bjork, Hayao Miyazaki, and Tootie Montana are my folks. The common underlying theme is that I would feel a tremendous need to push myself in a way that I’ve never done before to make something for them. Bjork is like a real-life bolt of lightning in terms of her energy and spirit. She pushes her art direction and theatrics in a way that no one else does. Miyazaki’s animation and films have brought me so much inspiration, and in some ways I’m sure that I can’t even tell. Finally, Big Chief Tootie Montana, rest in peace. He was the chief who pushed the masking culture to be more about pageantry and aesthetics — lookin’ pretty — in order to shift away from violence and conflict.

What would your brother think of your new work, if he was alive today?

He would be excited to know I’ve learned to pick this up and run with it, and he would encourage me to go harder, to do what I’m doing, but more so. Way more so. He always pushed me in that direction. I think his influence and guidance are very apparent in my art.