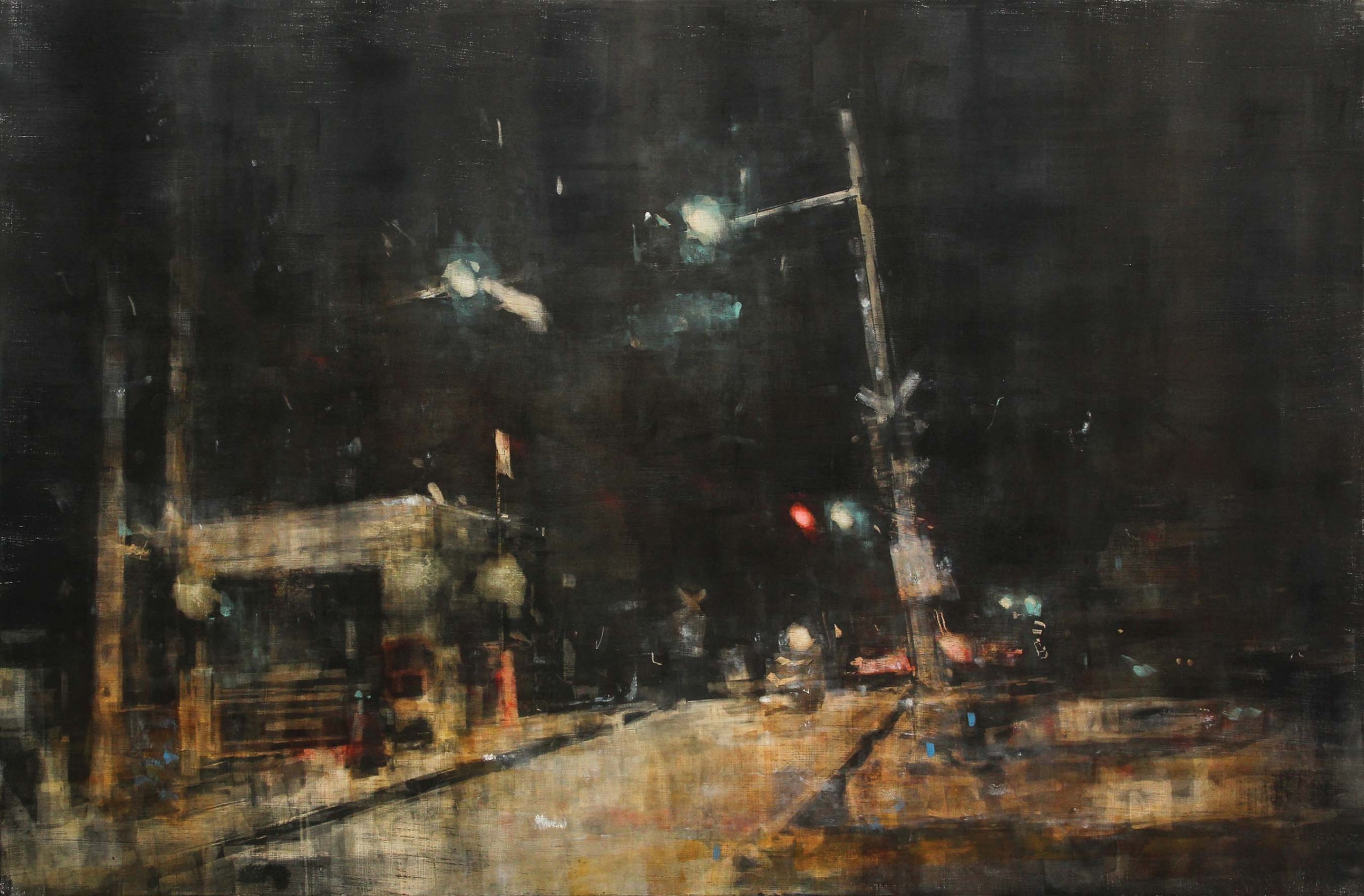 Kaori Maeyama creates paintings based on blurred images snapped on her cell phone while driving through the streets of New Orleans.

Is there music without sound? One only has to look at the paintings of New Orleans artist Kaori Maeyama to hear the pulsating rhythms and piano strides of Professor Longhair, Fats Domino, The Neville Brothers, Irma Thomas or the funky sounds of Dr. John and the cadent chants of The Wild Magnolias. Music seems to drift out from the dark shadows of Maeyama’s dimly lit landscapes of New Orleans streets at night.

Maeyama, born and raised in Fukuoka, Japan, fittingly describes her paintings as nocturnes. To capture these images, she and her husband drive through the city at night and, with her cell phone in hand, she takes blurry photographs of street scenes and reflections in her car windows while the car is in motion. What we see are not specific locations but impressions of light emanating from darkness. These images serve as reference photographs for paintings back in her studio. As she says, her paintings give viewers obscured “glances” of the city at night.

Fittingly, it was music that brought Maeyama to New Orleans in 1994 as an international student at the University of New Orleans, or UNO, where she received a bachelor’s degree in filmmaking. She chose New Orleans because of its relatively low cost of living, warm climate and music.

“The main reason, though,” she says, “was the Wild Magnolias albums. I worked for an import-only record store in Fukuoka, and while I was considering going to college either in New Orleans or Atlanta in the spring of 1994, Polydor (British record company) re-released the 1974 Wild Magnolias album for the 20th anniversary. I had known about The Neville Brothers and Professor Longhair, but I had never heard of The Wild Magnolias until then. New Orleans seemed like the most interesting place in the U.S.”

After graduating from UNO, and acclimating to the “absurd amount of rain,” Maeyama worked for a time as a camera assistant, making short films and music videos. She also served as an audio editor and managing producer for the popular American Routes program aired nationwide on National Public Radio. There, Maeyama edited interviews with music legends Allen Toussaint, Trombone Shorty, Irma Thomas and many others. She later went on to earn a master of fine arts degree at Tulane.

Like so many others, Hurricane Katrina changed her life. During the long recovery, she spent hours with local documentary filmmakers and listening to the lives of musicians and other local “culture bearers” such as the Black Masking Indians. With those voices embedded in her imagination, Maeyama wanted to create something to express her feelings about New Orleans. She took art classes with UNO professor Doyle Gertjejansen and studied plein air painting with Phil Sandusky at the New Orleans Academy of Fine Arts, where she now teaches drawing and painting.

“At first,” she says, “I felt obligated to document the city in paintings because New Orleans was changing rapidly. After painting on the streets for six years, I could not help but inject my perspective in my work because I finally felt I really belonged to this place. I paint New Orleans because this is one of the few places where the Japanese concept of wabi-sabi, which appreciates beauty in the imperfect, is visible in everyday life.”

As her skills and interests progressed, Maeyama moved from the detailed realism of plein air painting to her more abstract and introspective nocturnal glances of New Orleans night landscapes without obvious visual references to any specific place in the city. They are emotional responses to the mundane and ordinary.

To paint her nocturnal cityscapes, Maeyama has developed an unusual method applying thin layers of paint on to large homemade wooden panels with printmakers’ brayers, or rollers, squeegees, scrapers, rags and her own fingers. Music is constantly playing in the background as she paints.

It works. Among a growing list of honors, she received a Joan Mitchell artist-in-residency fellowship in 2020.

Maeyama’s nocturnes may seem quiet but, as she says, “they are full of noise and distortions with marks made quite violently.” That Japanese aesthetic of wabi-sabi is evident in all her work. The light radiating from shadowy streets draws the viewer into a lonely and unsettling darkness.

“Everyone feels isolated at one time or another no matter who they are or where they are,” she says. “I strongly believe that finding beauty in the mundane and broken institutes an invaluable shift in perspective. The empathy for the others will grow by looking at the world through someone else’s eyes, and art lets you do that.”

Painting New Orleans, continues Maeyama, “has taught me that being different doesn’t mean strange or inferior.” 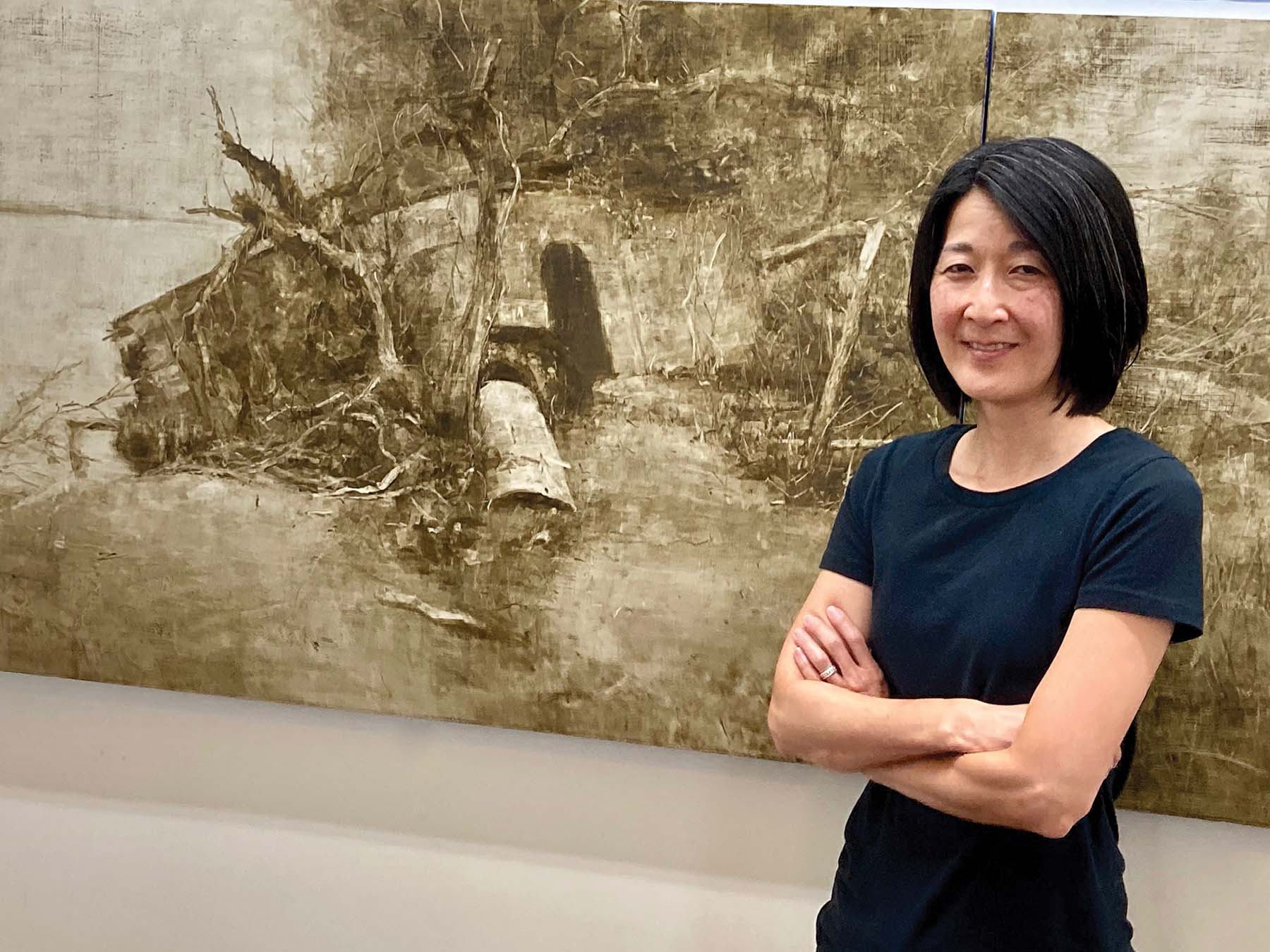