It’s no surprise that in a state that brands itself “Sportsman’s Paradise,” the art and craft of fine firearms is very much alive and well. Our neighbors include stockmakers, metalsmiths, engravers and restorers, several of whom are working at such a high level that collectors and enthusiasts from around the country have taken note.

“I work for people in New Jersey, I work for people in Pennsylvania, Florida, Texas… all over the place,” says Delhi-based gunsmith David Christman, Jr., who, like most fine arms craftspeople, designs exclusively on a custom basis, working directly with clients to bring their vision to life.

“There’s just something about fine firearms,” says Christman. “There’s a niche for everybody. You may like one kind or another. You may like the process of building them, you may like to just look at them. But there’s something — some style or some element — that really can appease anyone.” 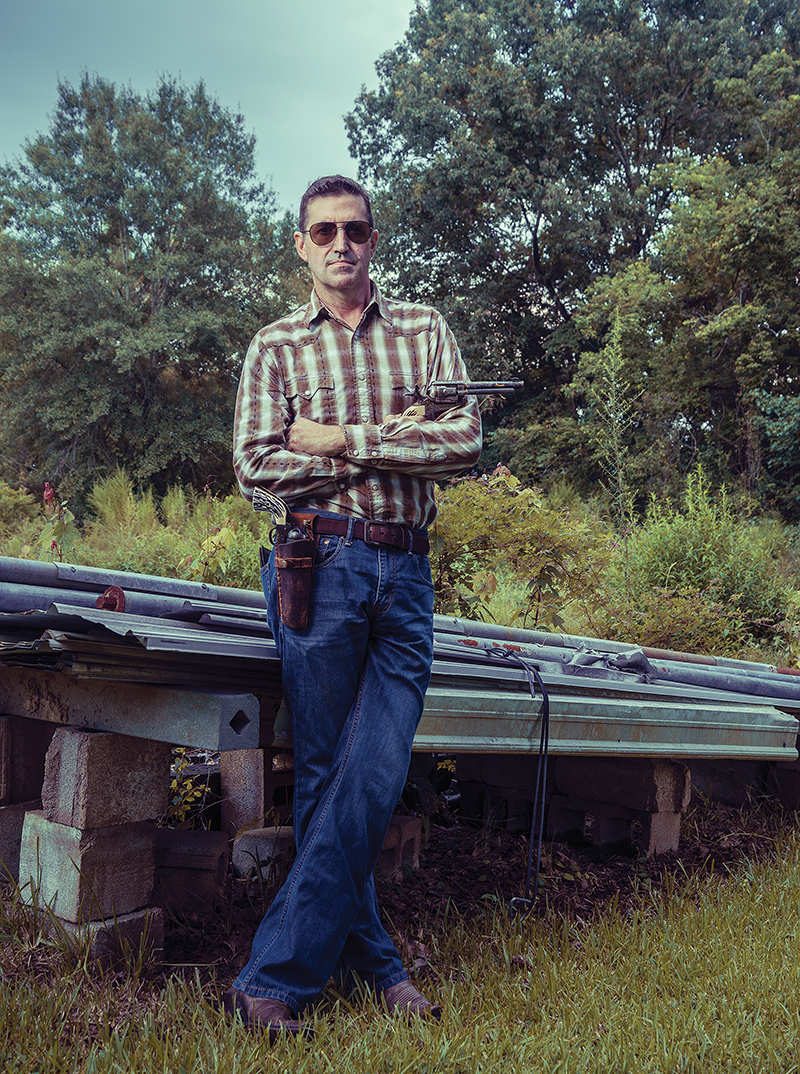 Baton Rouge’s Layne Zuelke, a certified master engraver with the Firearms Engravers Guild of America, says that the creative vision itself is often part of the customer’s request.

“Most people who are buying the level of work that I do, they generally just turn a gun over to me and let me run with it,” says Zuelke. “They’ll give me a budget. Sometimes they’ll give me a theme that they might want, maybe scrollwork from a certain period; they might want gold inlay or something like that, and then I’ll just go with that. But mostly everything comes out of my head.”

Zuelke initially trained as a jeweler beginnning at age 17, and while he still does some jewelry work, his interest in engraving firearms took precedence early on. Part of this was his attraction to working with steel, a much harder metal than silver, gold or other standard metals used in jewelry.

“Steel is much harder to cut, obviously,” he says. “Silver and things like that are really soft. So the techniques are a little different with steel. You can’t just use a push graver in steel — you have to use a hammer and chisel or a pneumatic graver.”

Steel is not only physically hard, but it’s unforgiving. Unlike gold, where a little heat or pressure can smudge things back into place, once you cut steel, there’s no going back.

“There’s no room for mistakes,” says Zuelke. “There’s some tricks we’ve got to fix an errant line, but for the most part, you don’t make mistakes. You need to be confident enough in what you’re doing to know that you’re not going to mess up.”

This level of difficulty in craftsmanship is part of why there are so few people actually doing this work — the Firearms Engravers Guild of America only has around 50 master engravers on its rolls — and the difficulty and scarcity of the art form mean the price tag is astonishingly hefty. Zuelke’s objets d’art can sell for upwards of $30,000 and he’s not hurting for work, but he’s humble about it.

“Most of [my clients] find me through social media or the internet,” he says. “I don’t advertise, so it’s just word of mouth.”

Even with five-figure price tags on his pieces, Zuelke encourages his clients to use the guns now and again, advising, “Please don’t just put this in a safe or put it on the wall, go shoot it.” He is clear that his engraving does not affect the utility of the gun, and keeping the weapon in good working order is, in fact, part of what adds to the difficulty of the craft (and thus, to exacting craftsmen like Zuelke, the appeal).

“I’ve said that I think that engraving is one of the highest forms of art,” he says. “The reason behind that is that as a gun engraver, I’m combining four different skills to create something: I’m an artist first. I have to be able to get down on paper, y’know, my vision. I have to be a gunsmith second, because I’ve gotta be able to work on that gun — disassemble it … I’ve gotta be a metalsmith next, because the gun as it comes from the factory is usually not clean enough for me to engrave, so I’ve got to refine the gun: sand it out, polish it. And then I’ve got to be an engraver fourth. So combining all of these things into one art — it’s not easy. If it was easy, everyone would do it.” 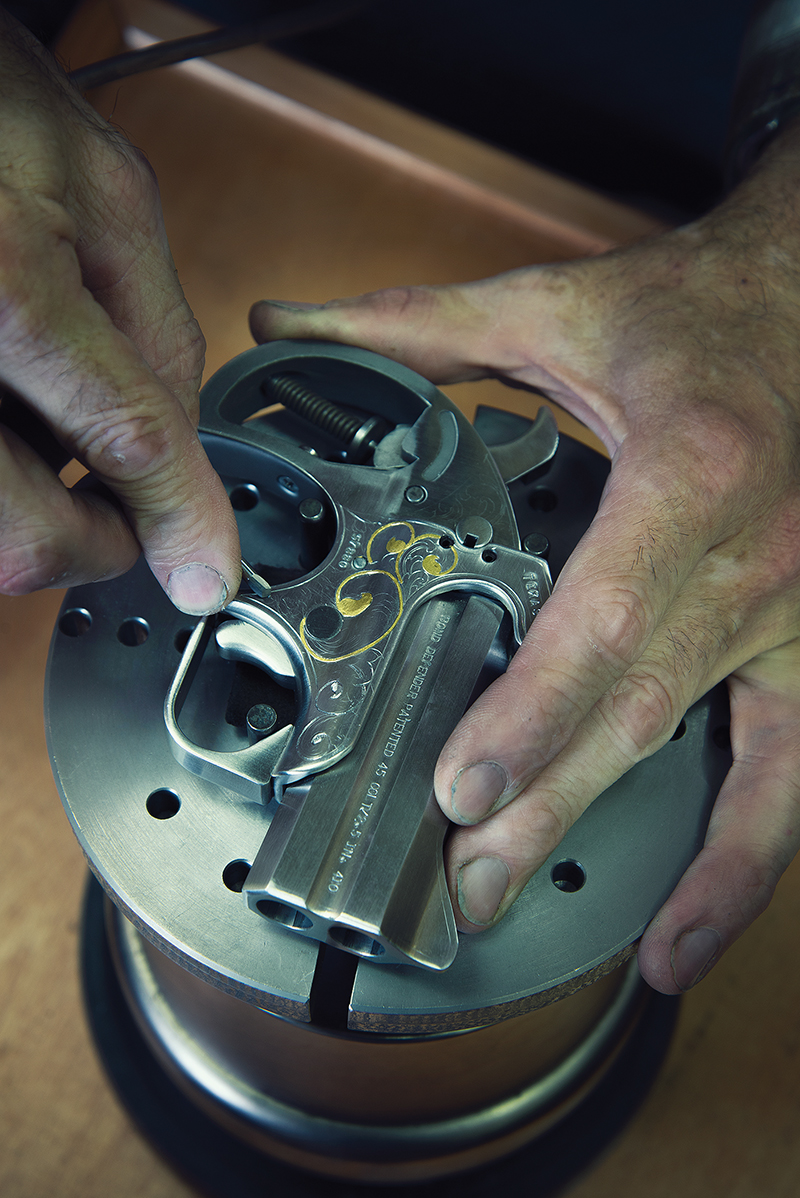 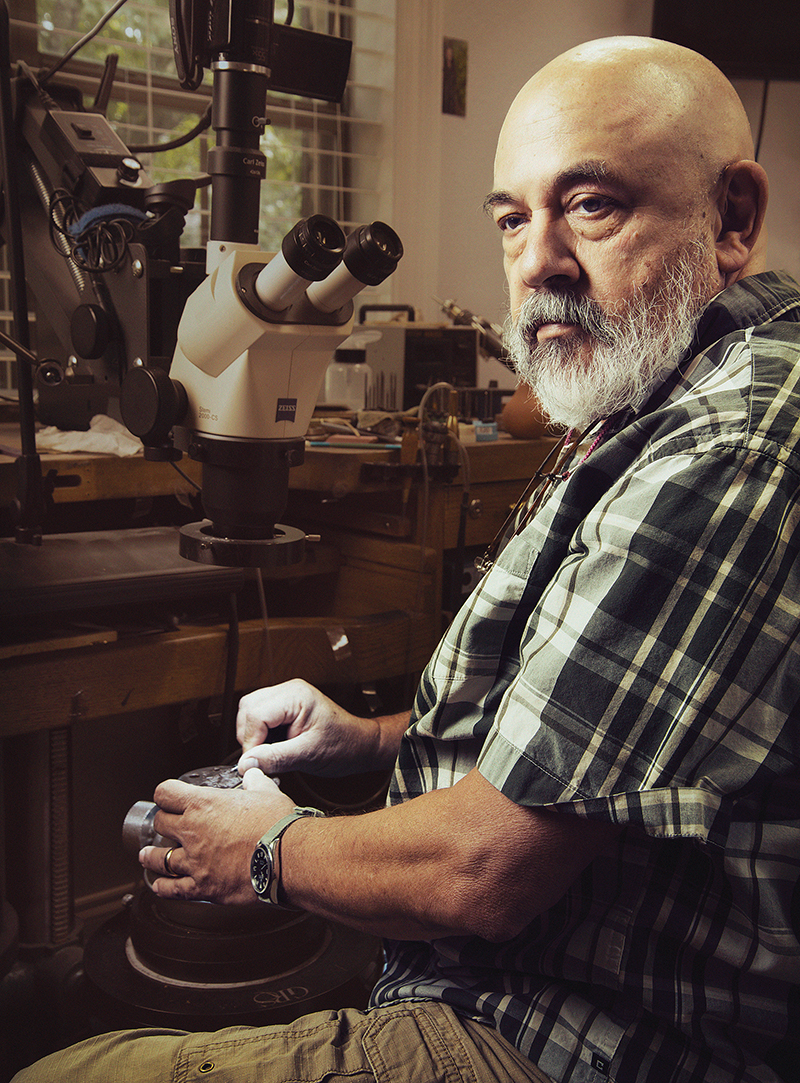 Covington-based Sam Alfano works with jewelry, knives, tools and even coins, but it was firearm engraving that first caught his eye.

“My father was a firearms enthusiast and he had lots of magazines and books with pictures of firearms and I was always fascinated by that,” he says. “And I was an artsy kid anyway, so it was just something I pursued because of my interest in art. I got my first set of engraving tools from a mail-order catalog in the early 1970s and I didn’t know how to use them. And I struggled with them for about 10 years before a book came out that explained how to sharpen the tools and how to use them.

“Once I got that book, I was off and running and it was at that point that I started calling myself an engraver because I could actually engrave something. A couple of years after that is when I was employed by the New Orleans Arms Company and I worked there for seven years as a gun engraver.”

“Working with Lynton, that was like hitting the lottery for me,” says Alfano. “This was the first time I had been able to receive any instruction. Prior to that I was just self-taught.”

Like Layne Zuelke (one of the many engravers Alfano has taught), Alfano is attracted to firearms engraving in large part because of the technical demands.

“If it was easy, everybody would be an engraver,” he says. “It’s a very demanding, exacting art form. It’s certainly not for everyone. It takes a special kind of person to be able to spend days on end working on something the size of a pack of matches or a cigarette package. You put a lot of sweat and blood into something that’s very, very small.”

Alfano was recently named a grand master by the Firearms Engravers Guild of America, making him one of only a handful of craftsmen recognized at this level. Rather than lock himself away in a studio, Alfano uses this designation (and the skills that led him to acquire it) as an opportunity to teach and pass on this dying art to a new generation. He teaches workshops regularly at the GRS training center in Kansas and also offers private instruction in his own studio. Despite being a bit of a traditionalist himself, Alfano is not a stick-in-the-mud; he encourages his students to find their own artistic voices and is altogether delighted by some of the things he’s seeing.

“We’ve got some younger engravers that are engraving watches, particularly,” he says. “They’re doing more modern design. I’m a traditionalist: I like the more classic scrollwork and designs that are more timeless. But a lot of the younger guys are engraving skulls and tattoo-type designs and doing a beautiful job of it! And they’re very popular.

“So yeah, the trend is changing from some of the old-school stuff to some newer cutting-edge designs. These younger guys are really thinking out of the box. They’re influenced by tattoo art a lot and they’re incorporating that into high-end engraving jobs. They’re really doing quite well at it.”

Alfano, almost always in teacher mode, encourages young artists to try out engraving, but suggests that they do not attempt the self-taught route that he struggled with.

“If someone is interested in learning the art of hand-engraving, the best advice I would give them is to take a class,” says Alfano. “If you take a class, you can avoid years of trial and error. You can get in the game much quicker. And when you have a master that’s instructing you, they can help you over the hurdles and the pitfalls.”

The second piece of advice he offers is to hone your art skills.

“What you engrave is only as good as what you design,” says Alfano. “The best engravers are also accomplished artists. If you can’t draw a good design, then chances are you won’t be able to engrave one. I mean, you can use patterns from pattern books and that’s fine. That’s fine for the hobbyist. But if you really want to excel in the art, and have full flexibility as far as being able to do different shapes and design different objects, take a class and learn how to draw.” 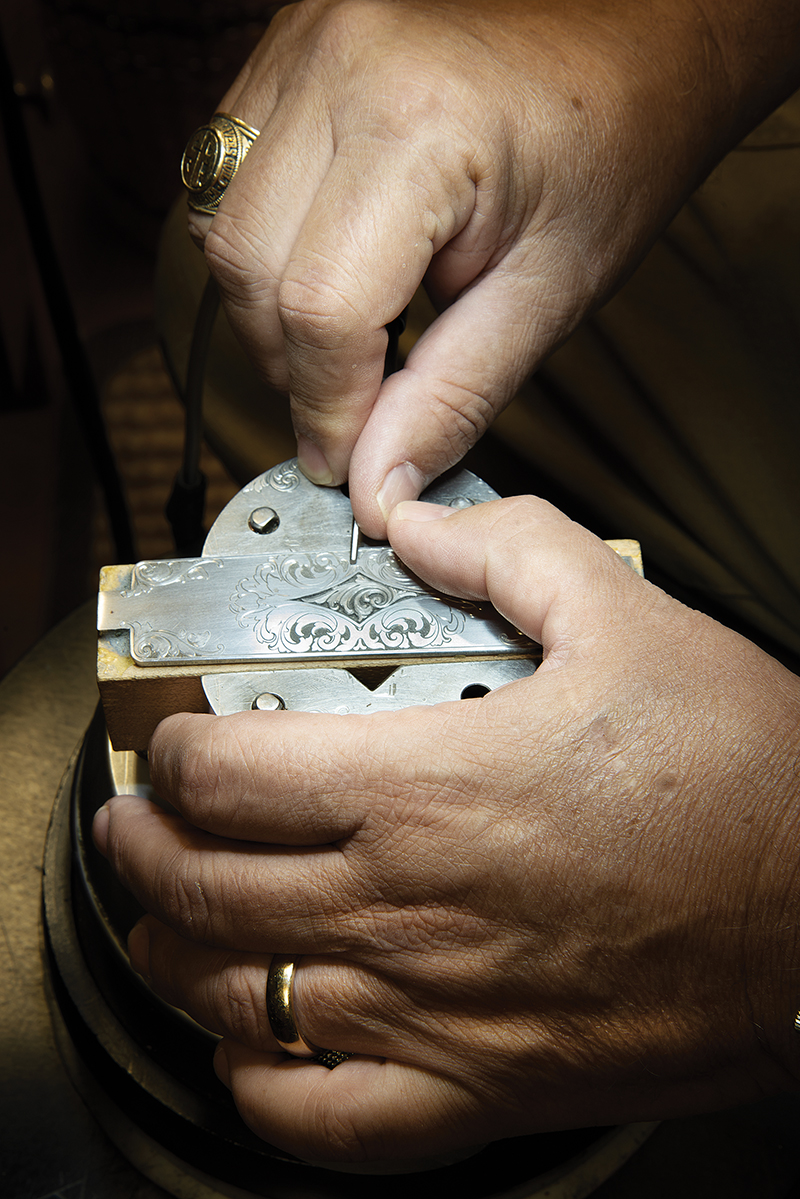 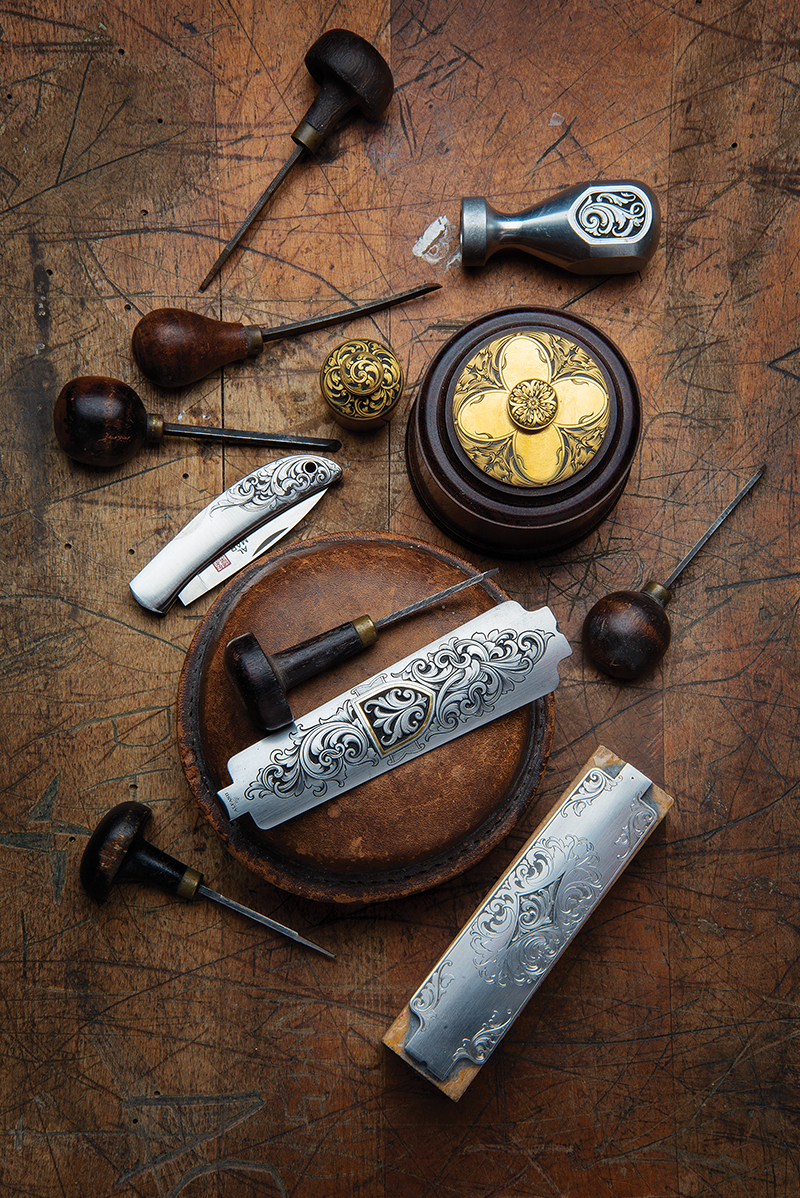 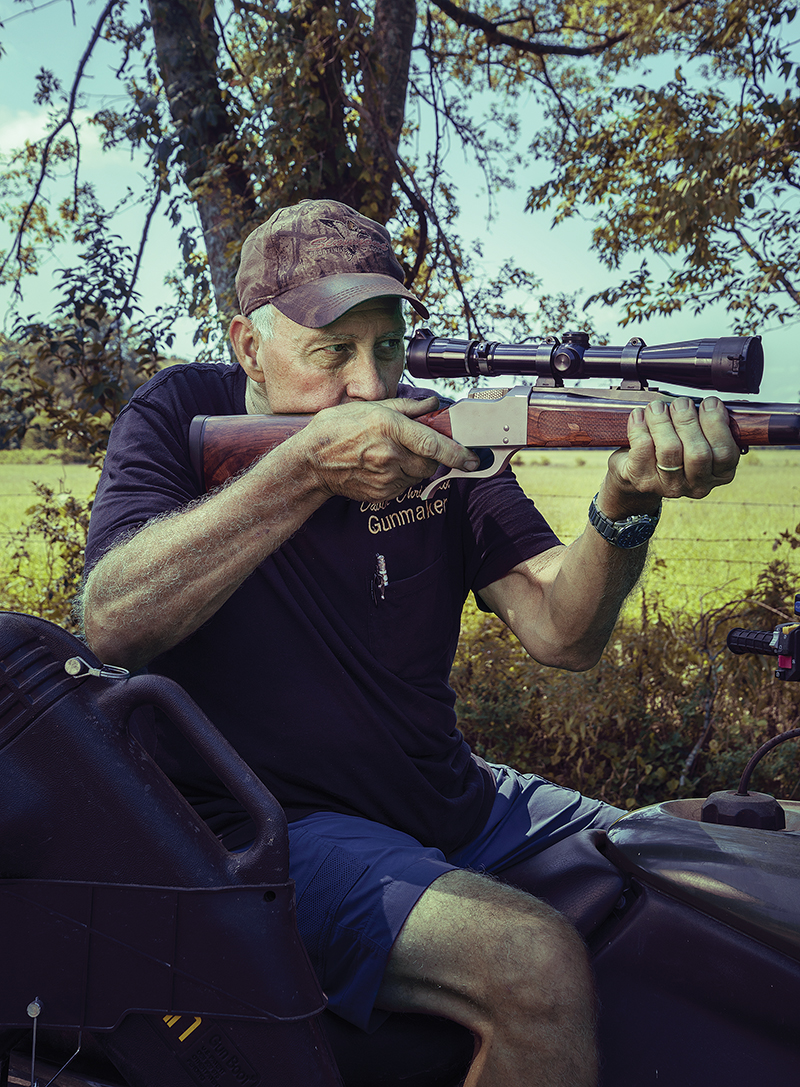 Up in North Louisiana, David Christman found a different element of guns to fall in love with. “

Christman is a hunting enthusiast who got into gunmaking in his 30s. What attracted him?

“I was too poor to buy a factory gun, so I built one,” he says. “That’s the truth! Necessity is the mother of invention. Life’s too short to hunt with an ugly gun. You know, I tell guys, ‘when you’re sitting out there in your deer stand, you’re gonna look at your gun a whole lot more than you’re gonna look at the deer’!”

He sees something important and even a bit poetic about the wooden stocks that he builds.

“I think the word I want is ‘warmth’,” he says. “There’s just something so different about holding a wooden stock and a synthetic stock. It’s the feeling itself, that’s what you get out of ‘em. And you should have wood in the woods.”

Christman starts as most craftspeople who work with wood do: with a nice wood blank. He prefers English walnut (“it’s just the prettiest”), but will work with whatever wood his client requests.

“From there, I whittle it, if you will, until it’s a stock,” says Christman. Harkening to Michelangelo’s famous philosphy that his works of art were already in the marble, he just had to chisel away the superfluous material. He laughs in agreement with the comparison. “Yep, that’s the same thing. Somewhere down in there is the stock you’re looking for.”

Christman prefers a clean, classic look to the stocks he builds, emphasizing the natural beauty of the wood and embellishing only very simply using checkering techniques. He does not begrudge other gunsmiths their own aesthetics, but makes it clear that the customer should really consider the specialties of the gunsmith when ordering custom weapons.

“I like the classic style,” he says. “I’ve got other styles I can do. I’m not crazy about it. This is a place where the customer makes a mistake: he sees a thing that the guy down the road has, and he likes it, so he comes up to me and says ‘I want one just like that.’ Well, I don’t do that. I excel at this.”

If Christman’s interpretation of “this” is what you want — be ready to wait. He builds only one custom gun per year nowadays, and has a few in the hopper. He does basic gunsmithing as well — replacing barrels, adding Cerakote (a ceramic coating that makes guns “just about totally impervious to anything a human or the elements can do to it) — but the high-craft, made-from-scratch weapons are a one-a-year deal for him. 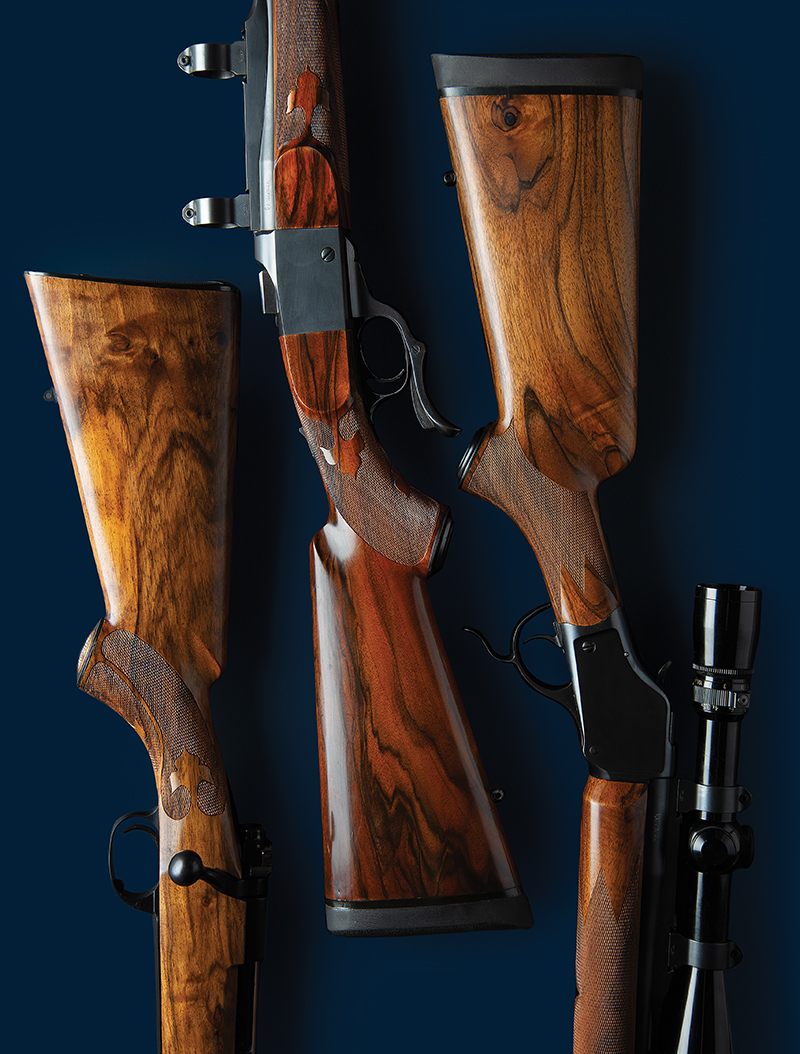 The Caesars Sportsbook App is Now Live in Louisiana