In a twist to this year’s cook-off, each past champion received a mystery ingredient by random draw. The mystery ingredient needed to be incorporate in their dish. To win the crown, Chef McPhail prepared a Sheepshead with shrimp and crab, garnished with a shrimp and tasso henica  incorporating his/her mystery ingredient of Bulldog Pepper Jelly Roasted Pecan, flambéed fresh sweet crabmeat with summer corn glazed with fresh whiskey, all on top of a creole sauce. Chef McPhail’s dish beat nine past champions of the Louisiana Seafood Cook-Off by showcasing his creativity and highlighting the superior quality of the seafood that comes from Louisiana’s shorelines and vast waterways.

“What a great way to celebrate the return of all our local chefs and their restaurants after what has been a challenging year for everyone. We couldn’t have asked for a better event with 10 past champions coming back to support Louisiana Seafood and the local restaurants of the state,” said Lieutenant Governor Billy Nungesser. “The level of competition we had tonight shows the passion Louisiana has for great food that will Feed Your Soul. We are ready for everyone to make their way back to Louisiana, safely, to experience what we already know and love.”

“The winning dish tonight was a lemon-seared sheepshead, which is a beautiful fish rounded out with the fish’s diet of shrimp and fresh crabmeat, fresh corn, local tomatoes, and a nice herb salad. It’s just a good honest Louisiana dish made with amazing, great Louisiana seafood,” said Chef Tory McPhail, 2021 Louisiana Seafood King of Kings.

Second place, by virtue of a second vote by the judges, went to Chef Cody Carroll of Hot Tails in New Roads, Louisiana. Third place went to Chef Chris Lusk of the Kimpton Hotel Fontenot in New Orleans. 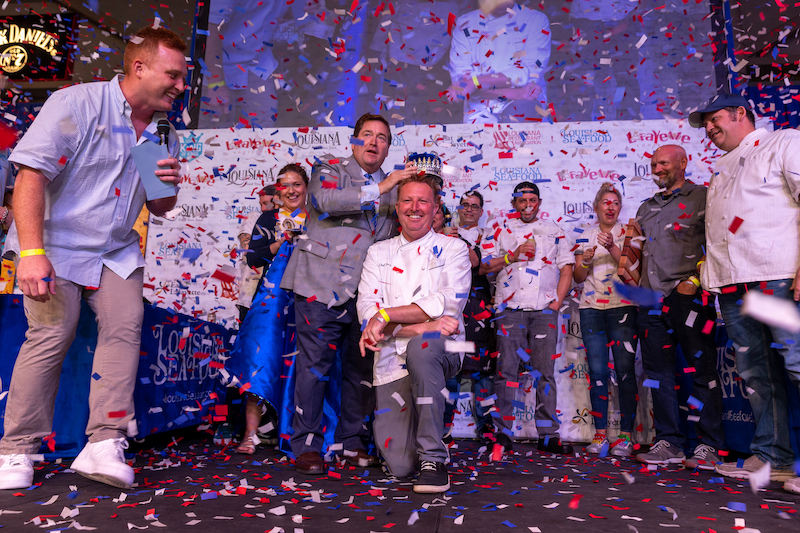 Past champions competing in the 2021 Louisiana Seafood Cook-Off: King of Kings were:

While Chef Tory McPhail took home the title King of Kings in Louisiana Seafood, Chef Robert Vasquez, our 2020 King of Louisiana Seafood, will represent the state in the 17th Annual Great American Seafood Cook-Off in New Orleans on August 7, 2021, in conjunction with the Louisiana Restaurant Association Showcase at the Morial Convention Center.

Those inspired by the chefs’ culinary creativity and looking to bring the state’s best seafood dishes to their own kitchen can visit www.LouisianaSeafood.com for recipes of each competing dish. To keep up with Louisiana Seafood throughout the year, follow @LaSeafoodBoard on Instagram and Twitter and at www.facebook.com/louisianaseafood.