Chef Kraig Dixon is a Crescent City native who grew up with a love of cooking for family and friends. Cooking as a hobby was a way to bring those close to Dixon together in celebration.

“My family had restaurants growing up,” Dixon said. “I pretty much grew up in the kitchen. Family events, parties, anything with my family. I’m the guy they call.”

When vegan restaurant Seed opened in 2014, however, it was unlike any food he cooked before.

“Seed was actually the first experience I had with vegan cooking,” he said. “But, good food is good food. Working here kind of opened my eyes. You don’t necessarily need meat to have a good meal. And, laying off meat has made my body feel different.”

The restaurant also works to do its part in protecting the environment by composting through Schmelly’s, which picks up food waste twice a week. Owner Edgar Cooper says in addition, all of the to-go containers are plant fiber, biodegradable or compostable.

“I would say my favorite thing on the menu is the veggie étouffée. You have the same flavor base that gives you the spice as a traditional would, but you still get the enrichment of the vegetables.”

Dixon says Seed’s menu has selections designed to appeal to every food lover no matter their preferred palate. Golden fried tofu nuggets, mountains of nachos, pad thai and, of course, poor boys are just a handful of the plant-based plates that have satisfied diners since opening. He has come to believe that healthy eating should not have to be complicated.

“I’ve seen it’s easier making relatable foods,” Dixon said. “Certain things are easier for people to try. Our nachos and chili cheese fries are things that get people to open up and be willing to try vegan food.”

While Dixon is an experienced chef in Seed’s kitchen, menu creation is a group effort.

“At the beginning there was a group of people with various ideas,” said Cooper. “We put together a list, did a lot of testing and worked the recipes. We switch out items and add new items by trying to do specials.”

Dixon was one of the masterminds behind several specials turned regular menu items.

“I would say my favorite thing on the menu is the veggie étouffée,” Dixon said. “You have the same flavor base that gives you the spice as a traditional would, but you still get the enrichment of the vegetables.”

Seed plans to finish a catering menu soon in response to demands from satisfied diners. 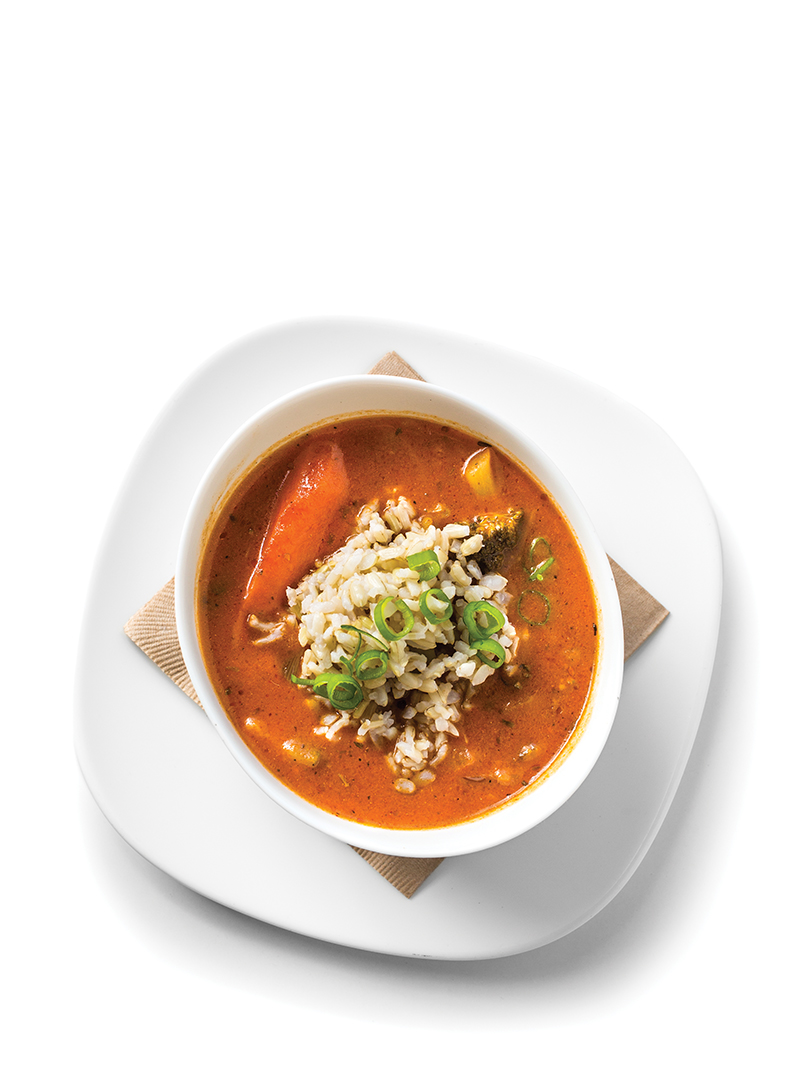 1. In a large pot, add 2 cups of canola oil. Once hot, stir in 2 cups of brown rice flour until golden brown. When the roux is golden brown, put the onion, celery and red bell pepper in the pot and sauté for 5 minutes.

2. Once veggies have been sautéed, pour the 8 quarts of water, bouillon, strained tomato, soy aminos, bay leaves and Creole seasoning into the pot and stir until well mixed. Once mixed, add the additional vegetables.

3. Cook down until it starts to thicken — at least 20 minutes.