The repertoire of classic New Orleans dishes is so enormous that it would take a book to enumerate them all. Some of the city’s fabled creations are extremely complex and should be left to professional chefs. Others, such as the following, are eminently doable at home. 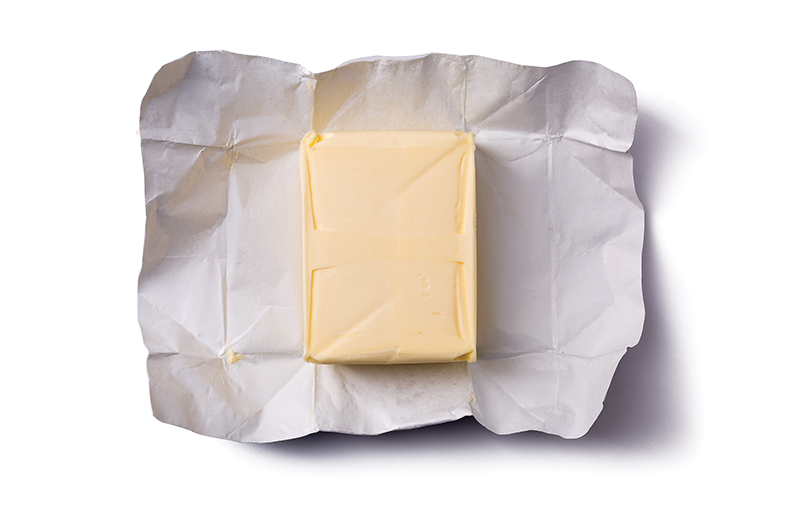 There are many different recipes for barbecued shrimp, but all of them contain lots of butter and black pepper.

THE MOST WELL-KNOWN
New Orleans dish made with heads-on shrimp is the barbecued shrimp that originated at Pascal’s Manale restaurant. It is a delicious and wonderfully messy concoction that is a misnomer since it doesn’t have anything to do with barbecue. Instead, it is made with gargantuan amounts of butter and black pepper that combine with the “fat” in the shrimp heads to make a toothsome sauce.

Recipes for the dish always concur on those points, but beyond that there is little agreement on what other ingredients go into the dish.

In fact, there is a complex mythology that has grown up around barbecued shrimp, perpetuated by story and legend that no doubt change with each retelling. Indicative of this is the following yarn: Years ago, a friend told me that a friend of his (you see how this works) got soused one night with a member of the family that owns Pascal’s Manale, who, in the course of their revelry, revealed the secret recipe. The problem was that my friend’s friend had been so drunk that the next morning he couldn’t remember what he had been told, so the secret was safe.

BIBS ARE A GOOD IDEA

Eating this dish is a messy, delicious experience.

2. Bake in preheated oven for 10 minutes, then stir ingredients. Return to oven and bake until shrimp are cooked through, about another 10 minutes.

3. Divide shrimp and sauce among 4 large shallow bowls and serve with plenty of crusty French bread to soak up the sauce. 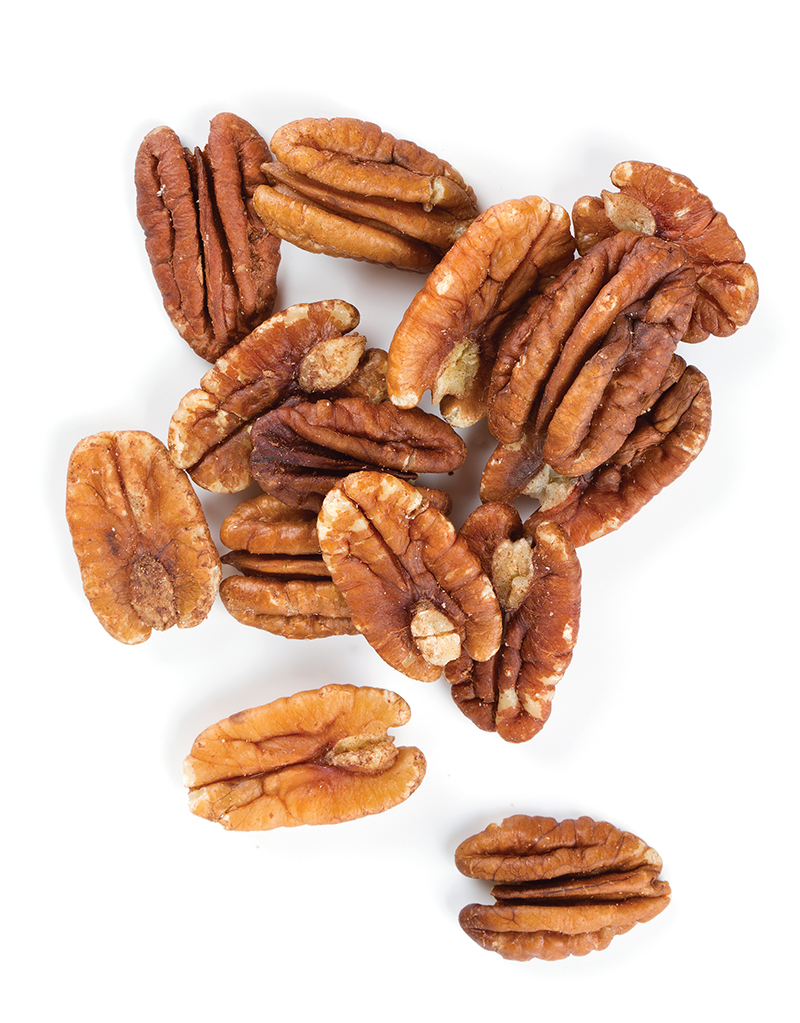 In early New Orleans, pralines took many forms; they were made with sesame seeds, coconut, almonds, peanuts or pecans. But it is the pecan praline that won out and has become inextricably linked with New Orleans.

“The Picayune’s Creole Cook Book,” published in 1900, references pralines going back 150 years in New Orleans. The book notes that pralines were sold by old Creole black women, called Praliniéres, on the streets of the French Quarter or in the school yards during the “noon recess.” Today, pralines are available all over town.

New Orleans undoubtedly produces more praline candies than any city in the world, but the rich, crunchy and creamy confection has undergone considerable evolution over the centuries. Even today, the praline is made in a number of variations. As with so many Louisiana specialties, there is no one master recipe. Preferences vary from cook to cook.

Many early Louisiana recipes for pralines called for forming the candies on a marble slab, the assumption being, I suppose, that everyone had marble in their kitchen. Perhaps reflecting the hard times of the Great Depression, the New Orleans City Guide, published in 1938, injected a more democratic note by specifying either “a greased marble slab or greased porcelain-top table.”

Contemporary recipes include a wide range of ingredients. Milk, buttermilk, half-and-half, light cream, heavy cream, evaporated milk, sweetened condensed milk, butter, margarine, white sugar, brown sugar (both light and dark), molasses, cane syrup, corn syrup (both light and dark), simple syrup, caramelized sugar, and vanilla are used today, though (thankfully) not all in the same recipe. In addition, recipes abound for chocolate pralines and versions with a variety of flavorings, such as orange or maple.

There is a certain mystique attached to making pralines, but the process isn’t really all that difficult. If you own a copper pot, you can go to the head of the class, but expensive equipment isn’t required. All you really need is a heavy pot of manageable size, a candy thermometer, a long-handled spoon and a good attention span. 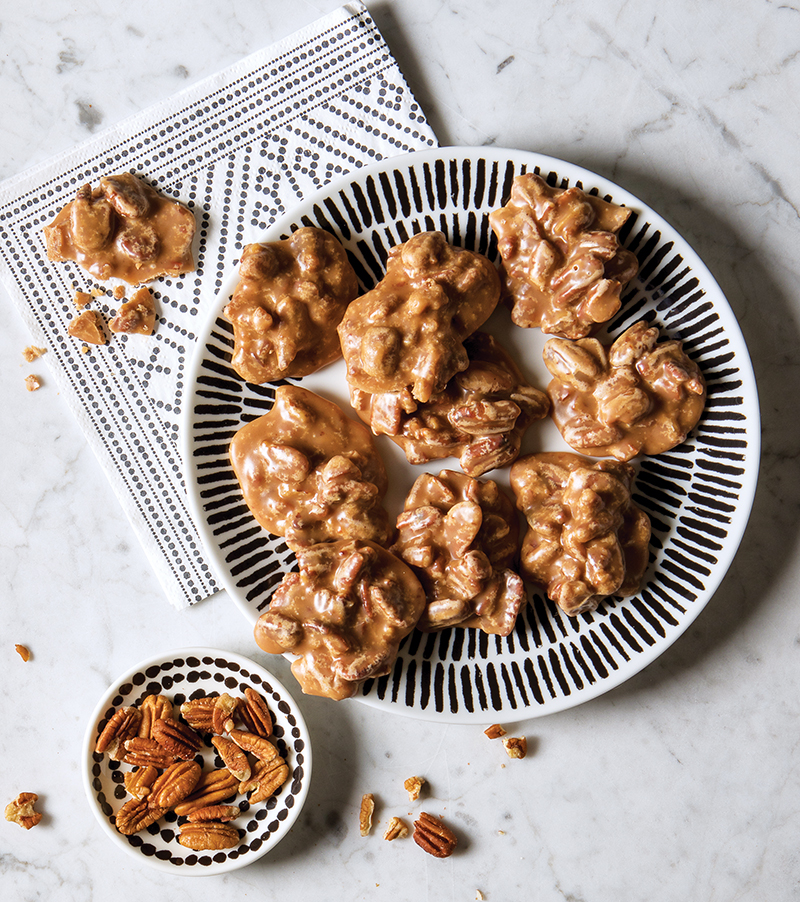 MAKE THIS TASTY TREAT AT HOME

I like these  made about the size of a silver dollar.

1. Place 1 cup pecan halves and 1 cup pecan pieces on a baking sheet and toast in a 325 degree oven for 10 minutes.

2.  In a saucepan, bring 1 cup heavy cream, 1½ cups granulated sugar and pecans to a boil and cook until the mixture reaches 234 degrees on a candy thermometer. 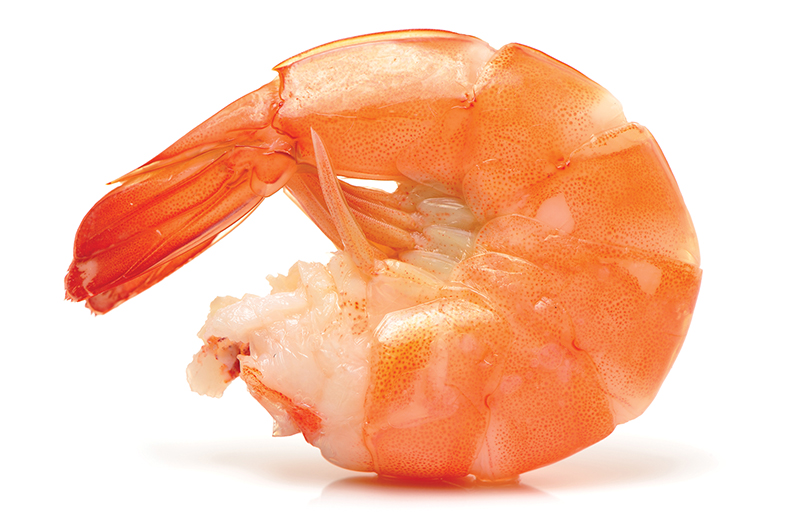 Shrimp comes first in the name, but it’s all about the sauce when it comes to which version of this dish you decide to tackle.

PREPARE
Add 1 pound boiled, peeled and deveined medium shrimp to sauce and stir so shrimp are covered in sauce. Cover and refrigerate several hours until chilled.

PLATE
To serve, place a bed of shredded lettuce on 4 plates and divide shrimp among them. Spoon additional sauce over shrimp, if desired.

Makes 4 servings as an appetizer 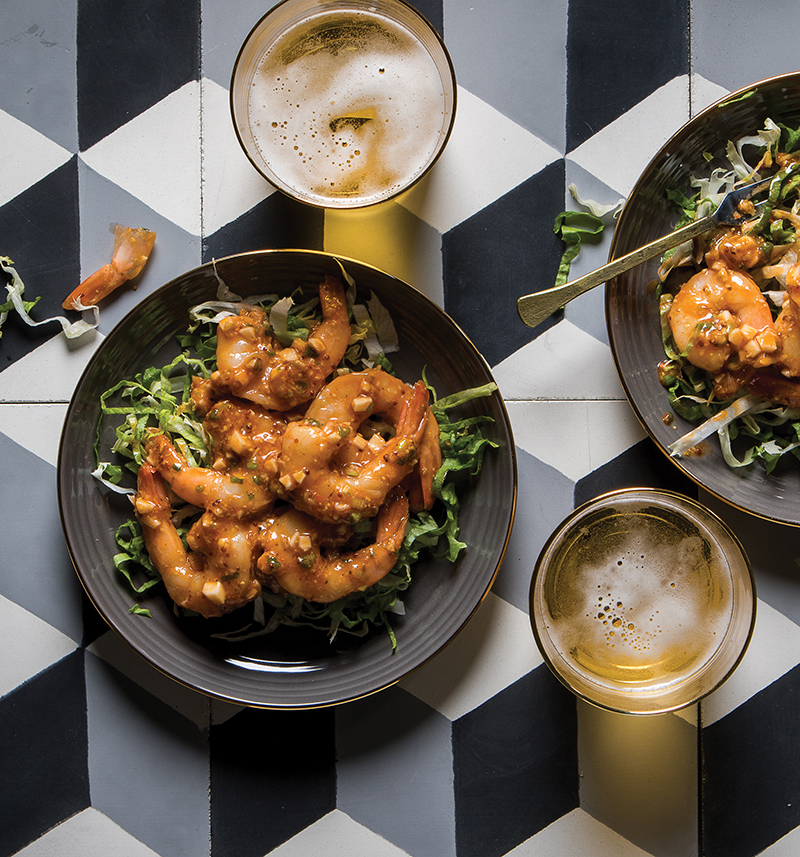 Another famous New Orleans dish for which there are different versions is shrimp remoulade. In all of the variations, the shrimp are boiled, combined with the sauce and served cold on a bed of lettuce.

It is the sauce remoulade itself that appears in different guises. One version is a white sauce with mayonnaise as its base, and the other principal type is a red sauce enlivened with Creole mustard, horseradish and other ingredients.

Various claims of authenticity are made for each type of shrimp remoulade, but that issue is largely academic. As has happened so often with Louisiana dishes that bear French names, our versions have evolved from the original and are noticeably changed. None of the New Orleans remoulade sauces conform exactly to the French sauce remoulade, although the white version is the closest, but so what? An outlander could understandably be totally perplexed by encountering so many variations going by the same name, but I bet he would find each one delicious in its own way. 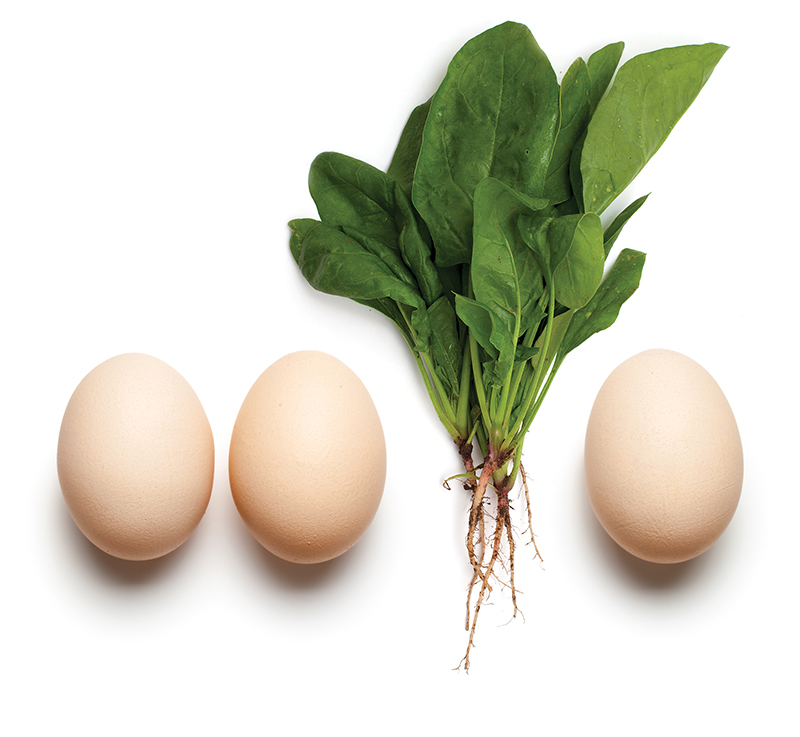 This dish is assembled from several components that are prepared individually: spinach, artichoke bottoms, hollandaise sauce and poached eggs. Prepare each component and keep it warm, then put them together and bask in the admiration of your guests.The Hollandaise sauce calls for unsalted butter. If you use salted butter, omit the coarse salt.

HOLLANDAISE SAUCE
In a stainless-steel mixing bowl, whisk to combine 3 egg yolks, 1 tablespoon lemon juice, 1 tablespoon water and ¹⁄8 teaspoon coarse salt. Place the bowl over low heat and whisk constantly, rotating the bowl at the same time until the egg yolks thicken and the whisk leaves tracks in the bowl. Begin adding 8 tablespoons unsalted butter (softened), a spoonful at a time, whisking after each addition. As you work, lift bowl away from the heat or on the heat, as needed to create a smooth emulsion. Continue until all the butter has been incorporated. Taste and add additional lemon juice and/or salt as desired. Place bowl in a warm spot while you complete the recipe.

PLATE
Divide spinach among 4 plates and place an artichoke bottom on top of the spinach.

Poach 4 eggs and place one egg in each artichoke bottom. Spoon hollandaise sauce over the poached eggs and sprinkle on some paprika for garnish.

*Place a small strainer over a bowl and break an egg into it. The thin liquid in the egg will drain off. Slide the egg into simmering salted water and poach until the white is set. Remove with a slotted spoon. 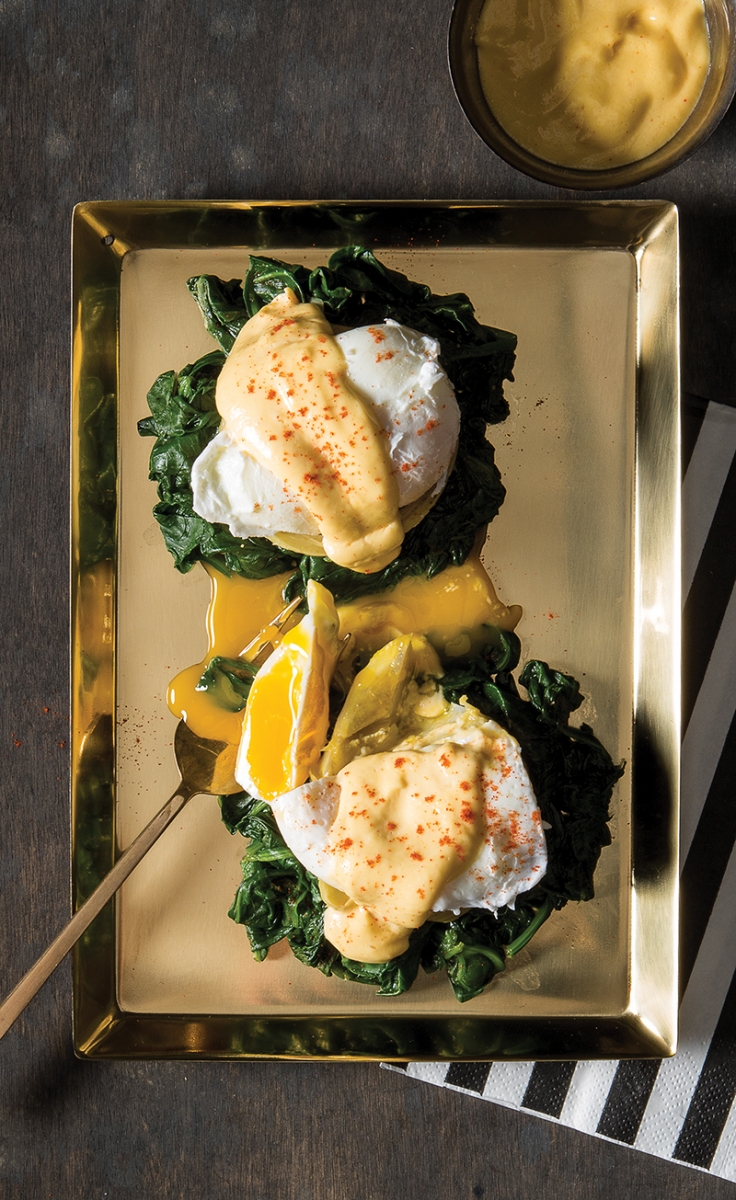 Alciatore at Antoine’s, Eggs Sardou were named in honor of the French playwright Victorien Sardou and served to him at Antoine’s in 1908. Originally, the dish included anchovies and truffles. Today, Eggs Sardou shows up in a variety of guises, but often it is composed of poached eggs in artichoke bottoms resting on a bed of spinach, finished with hollandaise sauce spooned over the eggs. This is one of the rich egg dishes popular at breakfasts, brunches and luncheons in New Orleans restaurants.

Trouble?
Frozen artichoke bottoms work perfectly well in this recipe, but they are difficult to find. Middle eastern food stores are your best bet. You can also start from scratch and cook fresh artichokes. If you love anchovies, one or two filets can be draped over each artichoke bottom. The dish is so rich that one egg per serving is sufficient for most people.