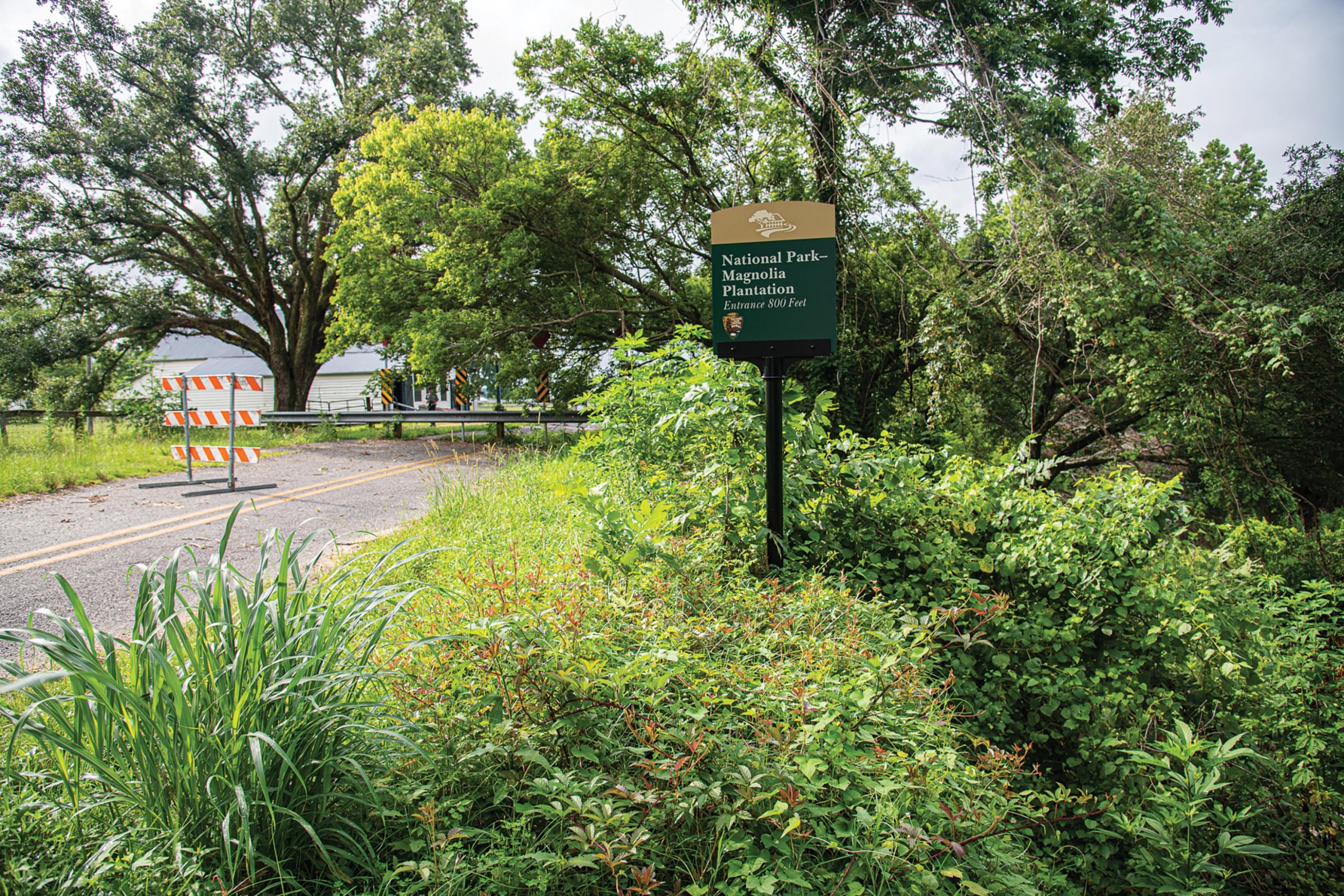 Since 2018, access to the Cane River National Heritage Trail has been blocked due to an embankment failure on Hwy 119.

Twenty miles south of Natchitoches, the future — and past — threatens to slide into the river that has sustained this region for centuries. Magnolia Plantation, southern entry to the Cane River National Heritage Trail, looms above an embankment failure 65 feet below the surface of LA Hwy 119. The National Park Service (NPS) maintains the plantation. The Louisiana Department of Transportation and Development (LaDOTD) manages the road. The riverside land belongs to descendants of Magnolia’s original owners.

A $4.7 million estimate to fix the location has forced a standstill. The LaDOTD closed the road with temporary fencing in 2018 and, out of continuing safety concerns, erected a permanent barrier the following year. The NPS won its petition to have that barrier established on Magnolia’s north side, thereby allowing entry to the plantation from the south. Type in GPS coordinates for Magnolia from anywhere today, however, and you will likely receive the following message: “Directions are not available at this time because of current road conditions.”

When Ron Bolton began working for the NPS in 1998, he could run a 15-foot bush hog on the bank across from Magnolia. Over the years, the land contracted. Then came the 2016 Cane River flood. Uprooted trees slid down the bank. Now, Bolton says, “There are parts that you stand on and feel like you will slide into the river.”

Near the permanent closure, wearing hiking boots and his NPS uniform, Dustin Fuqua balances on a thin precipice. “You can’t get along the historic trail from here,” he says. “This is a matter of tourism and history, sure, but people live on this road.” Fuqua is chief of resource management at the Cane River Creole National Historical Park (CRCNHP), a role in which his duties shift — hourly, it seems — from archaeologist to archivist, botanist, conservationist and historian. He speaks with the ease and authority of someone with advanced degrees in each. Growing up in Avoyelles Parish, Fuqua would ride his bicycle to explore the Marksville Prehistoric Indian Site and take his findings — arrowheads, pottery, and glass — to the museum workers to learn about what he had discovered.

“That fostered all of this,” he says of his work to preserve the material culture of Magnolia and Oakland, the two plantations that comprise the CRCNHP. Fuqua now has the opportunity to see kids search for their own artifacts. “There’s a spirit,” he says. “You see their excitement.”

You witness his own, too. Walking along the former fence line of the workers’ quarters at Magnolia, Fuqua grows animated at the sight of a lone rain lily. “Enslaved people planted these to mark the boundaries,” he says, bending for a closer inspection. “They planted it, and it’s still here. You can touch it. It gives you a frisson factor.”

Elvin L. Shields knows that factor well. He spent his childhood in a sharecropper’s cabin at Oakland Plantation, 10 miles north of Magnolia. History, for Shields, throbs in the present. He embodies the memories of his immediate ancestors, all of whom were born on plantations within a 10-mile radius of Oakland. “People visit plantations, and they want to see the big house. I call that the ‘Gone with the Wind’ version of the South,” he says. Along with the road closure and increased storm frequency and intensity, CRCNHP Superintendent Carrie Mardorf deems this another of the park’s problems: “Making sure we are telling the complete story of all people of Cane River.”

To do so, Shields and Fuqua visited antique and junk shops throughout the region to furnish one of Oakland’s two remaining sharecroppers’ cabins. “Momma had a chair just like that,” Shields would say, or, “There was a table like that in the entrance,” and Fuqua loaded the item into his truck.

Shields’s mission to preserve the memory and character of Oakland includes wanting to establish a historic district with uniform Creole-style architecture to combat another of the park’s challenges: uncontrolled urban development. Gazing at the large brick houses that line Cane River where workers’ cabins once stood, he says, “People can’t imagine how many Black people lived on Cane River. Now there’s no evidence that we were ever here because we didn’t own any land. But this place is my home.”

Did you know?
Facts and Figures