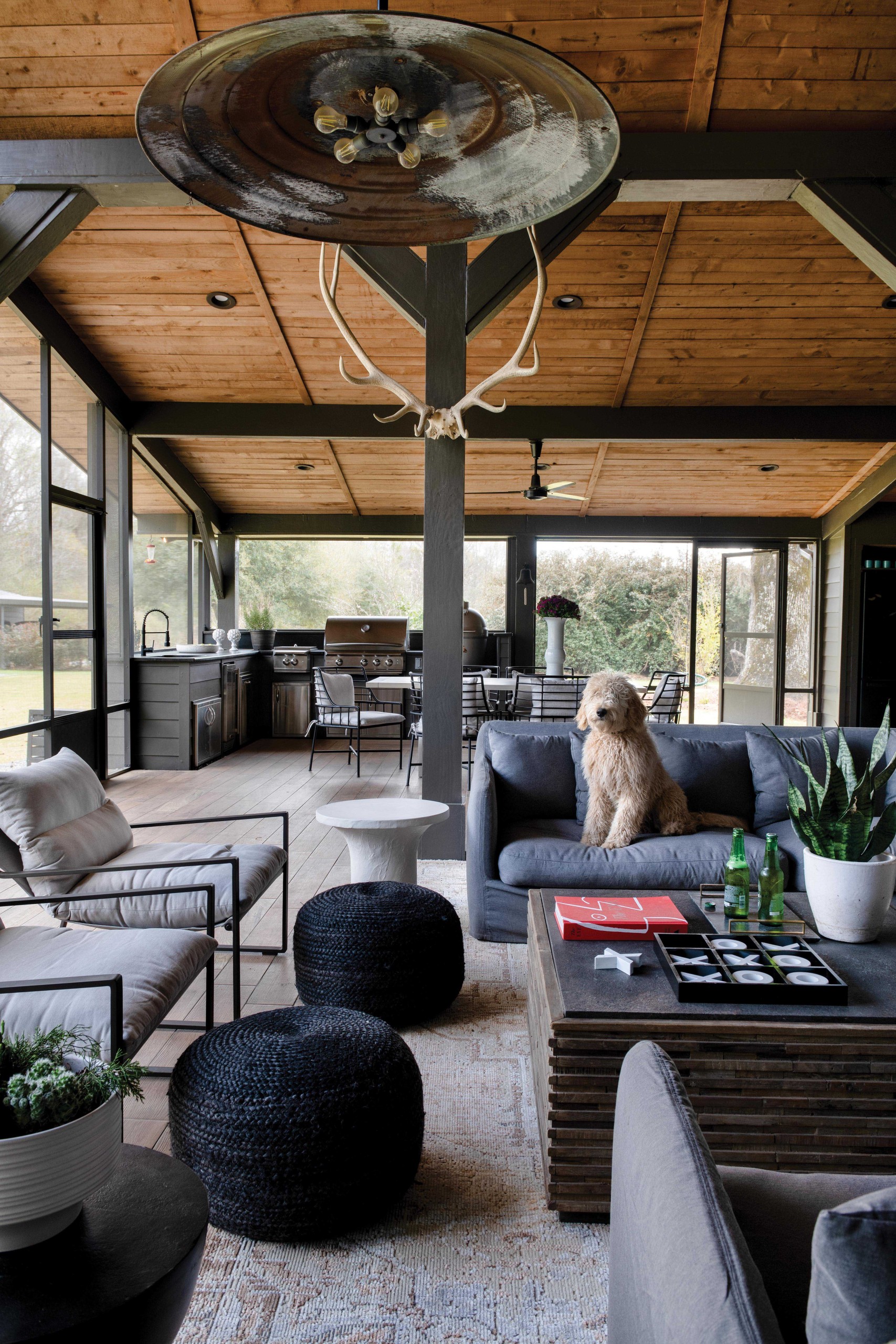 The homeowners turned an existing outdoor slab into a screened-in patio with a kitchen. The Naquins’ labradoodle, Goldie May enjoys the comfort of the indoor/outdoor living.

When Hilary and Jerith Naquin renovated their St. Francisville house, they were lucky to have multiple elements in place: a designer they trusted — their good friend Krystal Matthews of Krystal Matthews Design with whom they’d already done previous updates, a small guest house where the couple and their two children could temporarily decamp (along with their master bedroom and a small hunting camp in Mississippi), as well as a clear design direction. Matthews knew the clients’ tastes were sleek and modern with natural, earthy materials. In fact, Hilary took a quiz online that pegged her style as “modern rustic.” Since the property, built in 1991, is home to chickens, goats and miniature horses, rustic-farm-meets- modern -polish, or what Jerith cheekily calls “Gucci Farm,” was a no-brainer.

“They completely trusted me,” said Matthews. “I had a very free hand in the design.”

The Naquins bought the house in 2013 without having ever stepped inside based on the beauty of the secluded four-acre site, which has 200-year-old oaks and two lakes. Several years ago, they began a year of pre-planning, followed by a year-long renovation that involved replacing exterior siding with hardy plank and NewTechWood, and gutting the interior. While the footprint remains largely the same, they used an existing porch to enlarge the kitchen, and turned an outdoor slab into a screened-in patio with a kitchen and room for entertaining.

“The outdoor space is the quintessential heart of the property,” said Jerith.

Matthews also designed the barn and workshop as well as the garage.

As architect and designer, Matthews naturally took the setting into account. Outside, the house, tucked away at the end of a gravel road, looks woodsy with its simple, unadorned architecture and metal roof.

“It blends in with nature,” said Hilary.

But as you get closer, the NewTechWood that wraps part of the exterior hints at the modern interior. The updates include lots of outdoor views (Matthews chose the largest windows she could find for the kitchen) and artfully curated finishes that blend rustic and modern, while also providing contrast and allowing every feature of the house to have an understated importance that doesn’t compete with the scenery.

“No single feature is the star of the show,” said Matthews. “They like serene and calm.”

Four different cabinet finishes in the kitchen are strikingly harmonious. A hiccup in the remodel also added to the beauty of the space. Matthews originally intended to use a tile against the sink-wall, but the wall was unlevel and the horizontal lines would have been noticeably off. Her solution: vertical pieces of marble mixed with strategically placed pieces of metal schluter. The vertical emphasis of the wall, as well as the vertical lines of the cylindrical light fixture, the grain of the pantry cabinets and the cabinetry hardware, have the added benefit of visually raising the eight-foot ceilings.

Jerith, the CEO of his own executive staffing company, is partial to the softly lit landscape at night and to the reflective bar that Matthews designed for his whiskey collection. Hilary’s favorite part of the redesign are the kitchen windows connecting her to the outdoors and the whir of activity around the house.

“Since I was a boy, I’ve had the dream of living on a farm with animals and space,” said Jerith. “Krystal provided us this very unique way of doing that, combining our love of the city with our lifestyle in the country.”