Mention Louisiana food and immediately the mind fills with visions of favorites to natives and vistors alike, such as gumbo, jambalaya, crawfish etouffée, boudin, red beans and rice, all manner of seafood, strong coffee, bread pudding and pecan pralines. These and a hundred other dishes have given Louisiana a deserved reputation for its distinctive and delicious regional cuisine.

Indeed, for anyone who loves to eat Louisiana is a paradise.

The state’s fabled gumbos of course include chicken and sausage varieties that predominate inland and seafood gumbos that are more common in coastal areas. In either case, a dark roux is the thickener, sometimes combined with either filé or okra. The sausage is usually smoked, but fresh sausages occasionally make an appearance, as does tasso, a heavily spiced and smoked pork. Seafood gumbos may include some combination of shrimp, crab, crawfish and oysters. The variations among gumbos are almost endless and we all have our go-to.

Boiled crawfish, shrimp and crabs are extremely popular all over he state, either prepared in the backyard or eaten at restaurants that specialize in boiled seafood. Fried catfish, shrimp, oysters, crawfish and soft-shell crabs are available almost everywhere as are poor boys filled with fried seafood, roast beef or any number of other options. Everyday vegetables include tomatoes, okra, greens, corn, sweet potatoes, field peas, red beans and white beans (with rice, of course), as well as a variety of specialty produce from farmers markets throughout the state.

As you travel around Louisiana, the cooking will vary from one place to another, just as it varies from one cook to another. No one has ever been able to compile a list of all the different Louisiana gumbos or etouffées because the cuisine is alive and evolving. Just when you think you’ve sampled the best gumbo of your life, an even better one may be just around the next bend in the road.

An etouffée is a type of stew, usually featuring crawfish, but it may also be made with shrimp or with a combination of seafood, as in this version. Crawfish etouffée occupies such an exalted place in Louisiana cookery that it is often thought to have a long lineage. Actually, it is a mid-20th-century creation, but no less delicious for that.

1.In a heavy pot over medium heat, melt butter and cook onions and celery until softened, about 5 minutes.
2. Meanwhile, in a small mixing bowl, whisk together cold chicken broth and flour until smooth. Add to pot. Bring to a boil, reduce heat and simmer until thickened and raw taste of flour disappears, about 30 minutes.
3. Add crawfish and fat and cook an additional 15 minutes. Add lemon juice. Season to taste with salt, cayenne and hot sauce.
4. Add shrimp and cook until shrimp color, about 5 minutes. Add lump crabmeat and cook only until crabmeat is heated through. Adjust seasonings. Add onion tops and parsley. Serve over steamed rice.
Makes about 6 servings.

If you’re serving this etouffée to guests whose taste and tolerance for hot foods may vary, go easy on the spice and provide bottles of hot sauce that diners can add as desired. 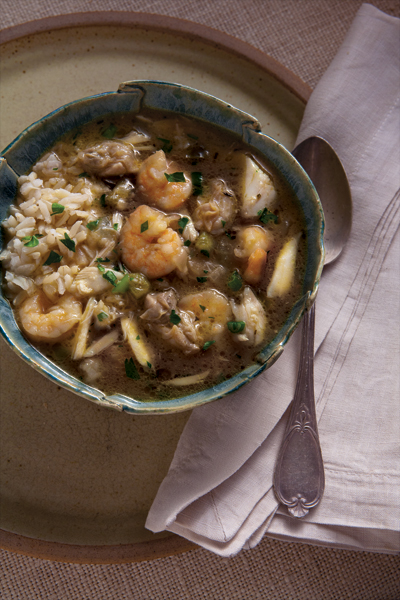 No dish is as evocative of Louisiana cooking as gumbo. Everyone makes it, and everyone makes it differently. It is possible to ascribe certain styles of gumbo to specific geographical locations, but within those areas the gumbos can vary greatly, even within the same family. This recipe is for a special occasion gumbo, made from three of the finest seafoods in the Gulf.

1. In a large pot, cook onion, celery and garlic in oil until softened, about 5 minutes. Add roux and stir to combine.
2. Slowly add chicken stock or broth to vegetable/roux mixture, while stirring, to combine. Add bay leaf and thyme, bring to a boil, reduce heat and simmer for about an hour.
3. Skim surface of gumbo. Add shrimp and cook for about 10 minutes.
4. Season to taste with salt, peppers and hot sauce. Add crabmeat and oysters; cook until crabmeat is heated through and oysters begin to curl. Adjust seasonings. Add parsley and onion tops. Serve with steamed rice.
Makes about 4 servings. 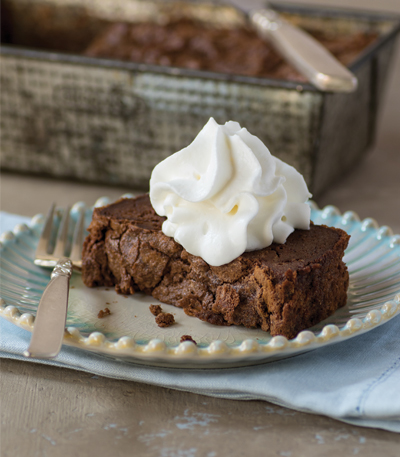 Bread pudding is another dish that is prepared by restaurant chefs and home cooks all over Louisiana. Originally conceived as a way to use up leftover bread, it ranges from homey examples to elegant confections, such as the Bread Pudding Soufflé at Commander’s Palace in New Orleans. If you love the combination of bread and chocolate, this version will have a special appeal.

1. Preheat oven to 350 F. Butter a standard loaf pan.
2. Break chocolate into pieces, combine with milk in a small saucepan and heat, stirring occasionally, just until chocolate melts.
3. Drizzle bread with melted butter in a small bowl and toss to coat.
4. In a mixing bowl, combine egg yolks, sugar, vanilla and liquor. While whisking, add melted chocolate and milk. Add bread and combine. Beat egg whites until stiff and fold into bread mixture.
5. Turn into loaf pan and bake until set in the center, about 40 minutes. Serve with whipped cream.
Makes 6-8 servings.

Whipped Cream
1. Whip cream until it begins to thicken.
2. Add sugar and whip until soft peaks form.
Makes about 2 1/2 cups.