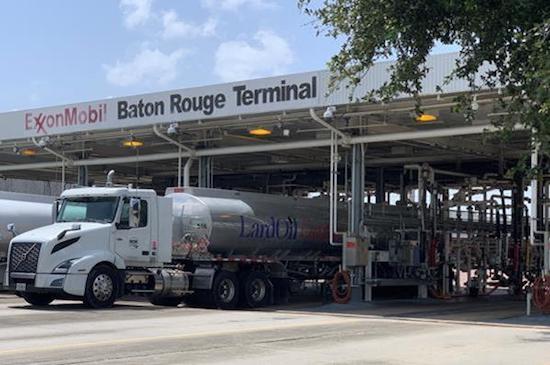 BATON ROUGE, La (press release) – The ExxonMobil Baton Rouge Refinery and distributor Lard Oil announced today a combined donation of approximately 28,000 gallons of Synergy gasoline™ and Synergy Diesel Efficient ™ to support Hurricane Laura recovery efforts in the Lake Charles and Sulphur communities. The gasoline and diesel comes from the Baton Rouge refinery terminal, and Lard Oil will transport the fuel to the impacted areas for distribution to emergency responders.

“Leading up to Hurricane Laura and in the immediate aftermath of the storm, our Baton Rouge refinery and terminal continued to keep customers and communities across the region supplied with fuel,” said ExxonMobil Baton Rouge Refinery Manager Gloria Moncada. “As soon as we learned of the need for fuel in Lake Charles and Sulphur, we made the commitment to help. I’m glad Lard Oil is joining with us to maximize this effort.”

“We are proud to join ExxonMobil in donating and transporting fuel to the first responders in Lake Charles and Sulphur,” said Lard Oil President and CEO Johnny Milazzo. “It’s an opportunity to give back to these communities where we live and serve.”

“We are grateful to ExxonMobil and Lard Oil for recognizing our community in this time of need. We are appreciative of your donation as we work to recover. We are staying strong, and our people are resilient,” said Sulphur Mayor Mike Danahay.

The fuel delivery process to Lake Charles and Sulphur emergency responders began on Sunday, Aug. 30, and will continue this week.