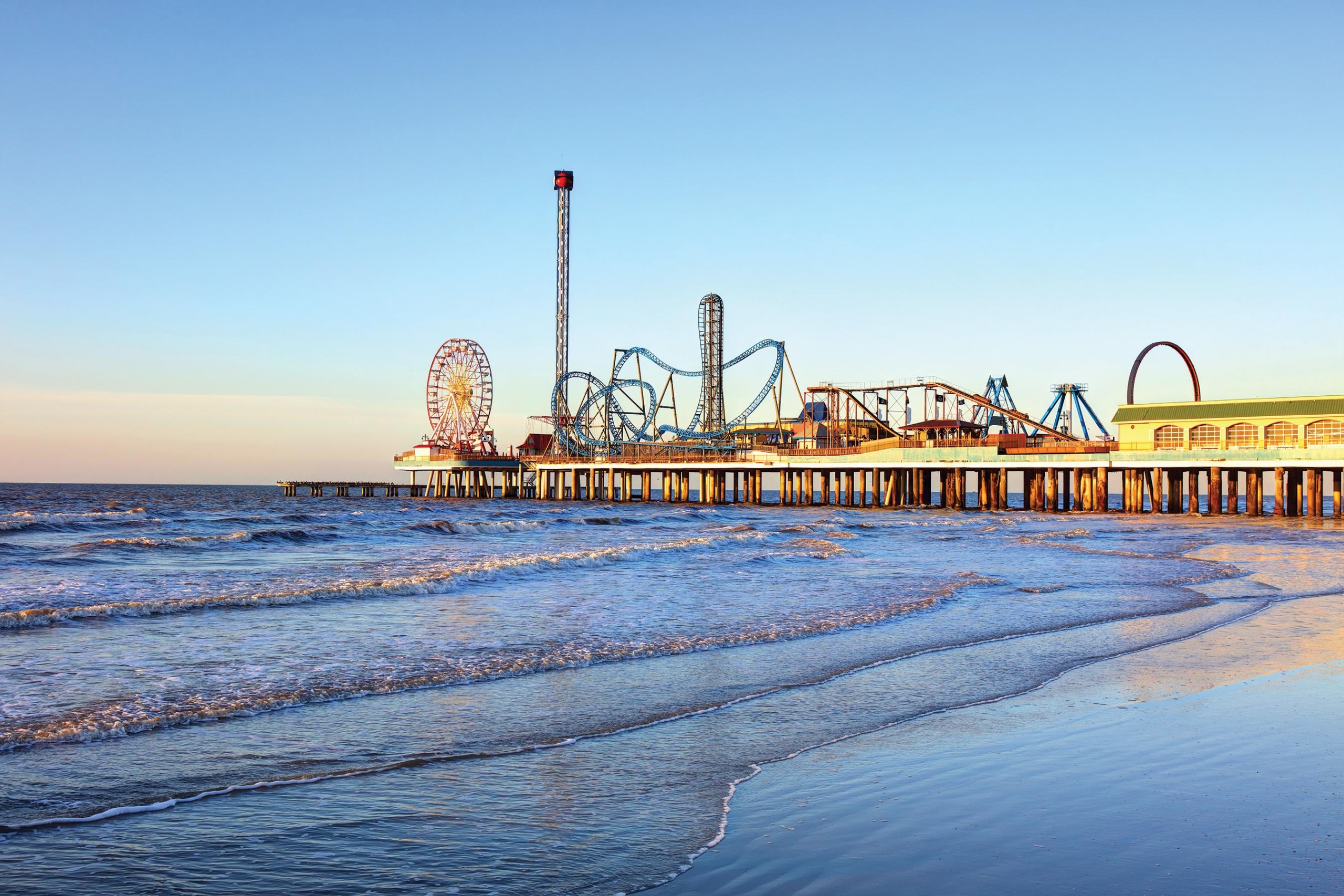 Despite buttoned up clothing, the Victorians knew a thing or two about pleasurable pursuits. They nicknamed historic Galveston Island “the Playground of the South,” for its more than 30 miles of shoreline, palm-lined Seawall, healthy marine air and bustling boardwalk. Most Texas beach towns have a quirky fishing village vibe, but Galveston, a barrier island located 45 minutes south of Houston, exudes elegance and gravitas. Still defined by ocean-facing mansions and cozy, gingerbread-adorned cottages built by wealthy merchants, the destination summons the ambiance of affluent East Coast, Gilded Age-constructed coastal villages. Think Rhode Island’s Newport or Watch Hill. That said, Galveston does it all with a strong Texas accent and Third Coast bravado awash in sense of place. With bike paths aplenty (the Seawall meanders for 10 miles), the National Marine Sanctuary (a coral reef system, ideal for divers), golfing options, fishing outings, surf-worthy waves, birdwatching venues and dedicated kayak routes, it tempts outdoorsy travelers. Others can build sandcastles, set up canvases to paint along the Seawall and explore the shops, galleries, amusements and eateries along the buzzy section, known as The Strand. There are museums, rooftop bars, gastronomic restaurants and old school seafood icons. Watch for festivals, including a sandcastle competition (in August), fishing contests, cooking extravaganzas, musical gatherings and the winter’s famous, holiday-oriented Dickens on The Strand, an homage to those bygone Victorians who knew a good thing when they played among it.

Eat
Delve into an island tradition at Gaido’s Seafood, which celebrates its 110th anniversary this year. Most famous for its pecan pie and seafood, the restaurant proudly makes its own sauces and salad dressings. Swoon over the Fritz specialty seafood topping, with garlic and sweet peppers. Eat casually at The Spot, a popular, palapa-roofed cafe. It turns out memorable poor boys, tacos, burgers and seafood. For steak lovers, Vargas Cut & Catch satisfies in the heart of the historic downtown district. Begin every day at family-owned Sunflower Bakery & Café. Get fueled for surfing lessons with their divine Oysters Benedict or puffy Challah French Toast.

Stay
Channel the past at The Tremont, a legendary hotel, set in the bones of a former dry goods warehouse. With 14-foot-high ceilings, elaborate ironwork balconies and bridges and a slew of ghost stories, it lies a breath away from The Strand. Beachfront, sprawling across 32 acres, The San Luis Resort, Spa & Conference Center has a range of rooms, including a group of sumptuous villas. Splash around at The Cove, the resort’s festive pool area.

Do
Between sunbathing or windsurfing, take some tours. Galveston Historic Tours explores the island’s exceptional architectural history. A highlight is the chance to see the Galveston Tree Sculptures, a grove of hurricane-destroyed oak trees transformed to magnificent works of art. The self-guided African American History Tour celebrates Black accomplishments, and teaches about the island’s significant Black institutions and monuments. Another day, walk the storied halls of the The Bryan Museum, which displays one of the world’s largest collections of historical artifacts, documents and artwork relating to the American West. Architectural buffs won’t want to miss Bishop’s Palace, one of the island’s best known mansions. For families and kids of all ages, youngsters can expend energy and satisfy curiosity simultaneously at Moody Gardens, Its attractions include an aquarium and live rainforest.

Pro Tip
Enjoy multiple Galveston attractions on one ticket, while saving 40% off regular admissions prices with the Galveston Island Pass. To purchase, visit galvestonislandpass.com. To access a variety of tours (including the African American History Tour) and general touristic information, get the Galveston app for Android or Apple devices, or via galveston.visitwidget.com.