In the midst of the Ebola crisis ravaging western Africa, several doctors from Louisiana traveled to the understaffed hospital and treatment center in Kenema, Sierra Leone, to help with diagnostics and treatment.

Two of these doctors spoke to Louisiana Life about their experiences.

Susan McLellan, M.D., M.P.H., is a native of New Orleans and an associate professor with dual appointments in the infectious diseases section of the School of Medicine and the Tropical Medicine department of the Tulane University School of Public Health and Tropical Medicine. When the World Health Organization put out a call for help, McLellan cut her summer vacation short after one day. Instead she traveled to Sierra Leone for two weeks to work at Kenema Government Hospital as a contractor for the World Health Organization, overlapping time with her colleague, John Schieffelin, M.D., Assistant Professor of Clinical Medicine & Pediatrics. The doctors there often treated up to 90 patients a day.

The hospital, located in Sierra Leone’s third-largest city, is under-resourced, understaffed and unable to provide food or blankets to patients.

“It’s not advanced at all,” says McLellan, who had worked there several times in the past. “There’s no such thing as intensive care; nobody can be put on a ventilator. They can give people IVs, but not with machines to regulate them.”

Kenema is in the center of diamond mining region. Dusk-to-dawn curfews are in effect, and it’s eerily quiet at night. Says Schieffelin, “Most people get to the hospital on motorbikes, so we had quite a few drivers who’d been infected.”

At the hospital, plastic mattresses with holes are scattered around the facility. Typically in many hospitals in Sub-Saharan Africa, it’s not considered part of everyday nursing duties to feed or clean patients; family members stay to help. In this Ebola outbreak, that is not possible, and nurses are in short supply. At most, a small staff of nurses gives medication and hangs IVs. Medical records, when kept at all, are written and often haphazard, rather than electronically recorded. Resources are severely lacking – in an “ideal” situation, Ebola patients, who suffer from extreme dehydration, would receive IV fluids around the clock; unfortunately at Kenema, they can only get a few bags per day while staff is there to monitor them. 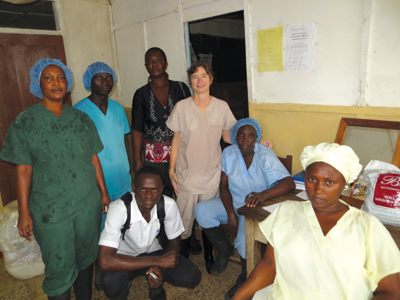 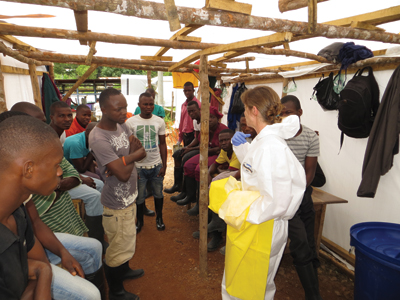 McLellan suits up for the day, preparing to enter the isolation ward. Personal protective equipment, mandated by the World Health Organization, includes individual gowns, gloves, masks and goggles or face shields, as well as boots covered with disposable protection. Here she is surrounded by the workers who clean and lift heavy equipment. She says, “They are not suited up because they aren’t going in yet, but they liked to hang out and watch us.”

More than half of the patients died, estimated Schieffelin; survival rates may have improved had they been more hydrated.
Neither of them are strangers to treating people with deadly diseases – McLellan, for example, worked abroad at the height of the AIDS epidemic early in her career; she has also worked through cholera epidemics. Briefed by WHO, she says the main rule was, “do not get hurt.”

“We can’t put an IV in anyone who’s going to fight us on it,” she says, revealing that many of the afflicted who fall under this description are, tragically, young children who attempt to fight off health care workers because they don’t understand that they are trying to help. “If someone responds in a way that makes it less safe, it can’t happen.”

“All of us had patients that we really put our heart and soul into, and we really tried hard and couldn’t help them through it.”

She gives the example of a 6-year-old girl with whom she became emotionally attached.

“After a couple days she got weaker, and finally she was weak enough that she could get an IV, so she got a little fluid.” By then it was too late for the child. “No one held her while she was dying; nobody was putting her in their lap or rocking her because you can’t do it.”

Even in the multi-layered personal protection suits, McLellan says, “The most you can really do is pet someone. I can’t pick anyone up. It’s a very isolating disease.”

Emotionally, Schieffelin says it became a bit numbing. “All of us had patients that we really put our heart and soul into, and we really tried hard and couldn’t help them through it,” he says. “We had some bad days, for sure, and especially when we lost one of the health care workers, that was very depressing for the whole staff.”

The Tulane doctors were equipped to to help out with the outbreak due to the extensive time that several of them have already spent in Sierra Leone.  Tulane has a long-standing relationship with Kenema Government Hospital. Dr. Robert Garry, a professor of microbiology and immunology at Tulane School of Medicine, is the current principal investigator of the Viral Hemorrhagic Fever Consortium in Kenema. His research focuses on the Lassa fever, which has similar symptoms to Ebola. Explains Schieffelin, “Prior to the Ebola outbreak, we had a dedicated Lassa fever ward and lab where all the testing is done. There is similar testing to Lassa – PCR [polymerase chain reaction] tests,” as well.

Because of the connections through their Lassa work, Schieffelin says that another faculty member, Dan Bausch, M.D., Associate Professor Department of Tropical Medicine, has worked on several Ebola outbreaks. Dr. Lina Moses, Ph.D., MSPH, has also played an integral role in the research and clinical work there.

“[Bausch] had already gone to Guinea for this one,” says Schieffelin. “He called me back in March to see if I wanted to go to Guinea, but the timing didn’t work out. Sometime in late June, they asked me if I could go to Sierra Leone, so I went at the end of July … We have that research infrastructure in Sierra Leone, and we’d helped maintain the clinical infrastructure there, so we were ready to go. We have a tradition of being there and working with these types of viruses.”

Having been to Sierra Leone eight times, Schieffelin was also familiar with not just the clinical work, but also the culture of the area, which he describes as warm and welcoming. As one can assume, however, the atmosphere has changed a lot. “We don’t shake hands anymore,” he says.

The current situation is undoubtedly bleak: “It’s going to keep being horrible for a long time. There is no way to quickly fix this,” says McLellan. “There’s a good chance that it could be contained in those three countries [Liberia, Guinea and Sierra Leone,] but what’s concerning is that it’s in urban areas with dense populations.”

Says Schieffelin, “It’s going to be a very long time before this outbreak ends and it’s going to be very challenging to get it under control. But Tulane and our collaborators were very well-positioned to step in and come up with new approaches to treatments.” 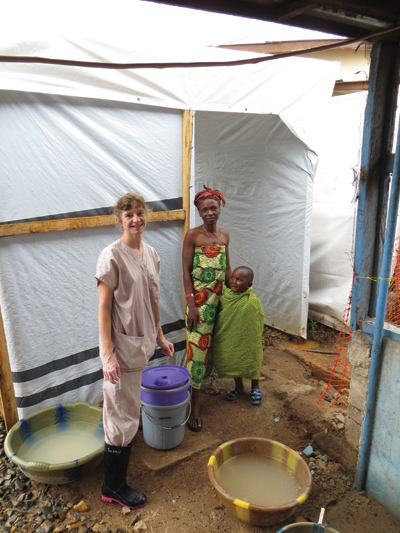 Dr. Susan McLellan with a young woman and child who both tested negative for Ebola. Their clothing was burned when they left the isolation area of the hospital, so they are wearing wraps.