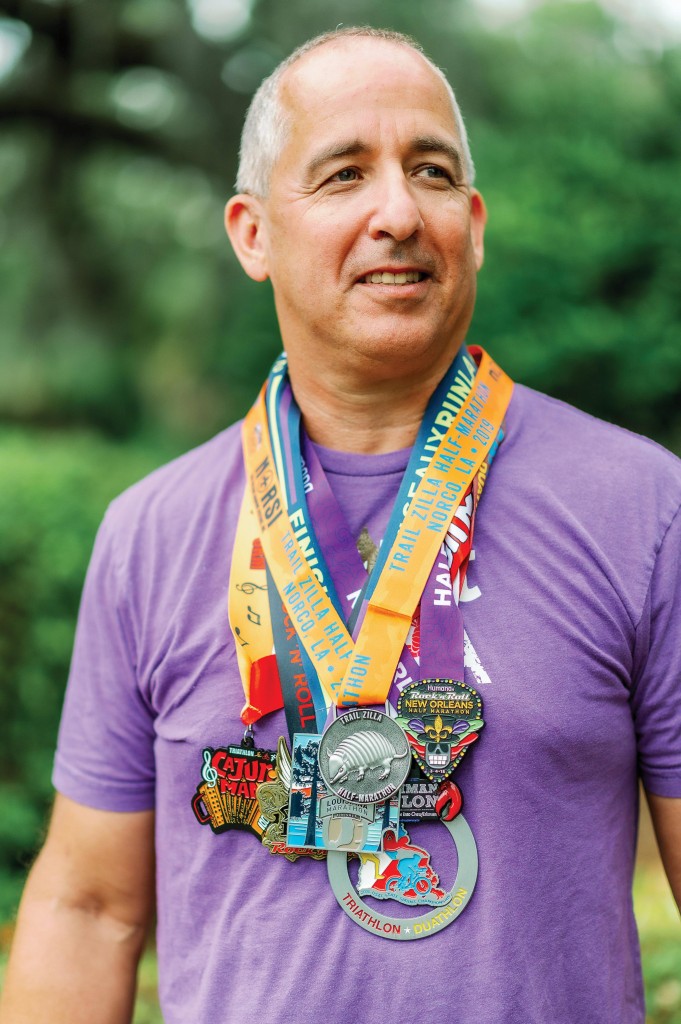 In 2015, Phil de Gruy was a successful restaurateur in his 40s. He owned and operated three locations of the popular burger restaurant Phil’s Grill. He had a loving wife and four children. But he was beset by severe stomach pain. Doctors kept telling him it was stress, and the restaurant business in a competitive market like the greater New Orleans area can definitely be stressful. One day in fall 2015, the stomach pain was so intense that de Gruy couldn’t even stand up straight. His employees convinced him to go the emergency room. Shortly thereafter, he was diagnosed with stage 3 colon cancer. A CAT scan revealed a 8-centimeter mass that had perforated his colon.

The diagnosis was a surprise because de Gruy was only 47 and had no family history of colon cancer.

He underwent surgery and six months of chemotherapy. Chemotherapy’s effects can vary depending on the patient and the type of chemotherapy offered, but it was difficult for de Gruy. He felt a tremendous amount of fatigue and sensitivity to cold.

“It was like wearing a wet blanket that kept getting heavier and heavier,” de Gruy said.

After about 13 months of remission, de Gruy’s cancer (now stage 4) moved to his lung and was pressing against his aorta. The tumor was hard to reach. This time, the surgeon went through de Gruy’s ribcage and pulled out the tumor and part of his left lung. On top of his health problems, de Gruy also made the difficult decision to close his final Phil’s Grill location in Harahan in 2017 (the Metairie location closed in late 2016).

The surgery was successful, but de Gruy was faced with the option of another round of chemo. He decided he did not want to do it again. While he does not fault anyone for their choices in treating cancer, the chemo clearly did not keep his cancer away after his first round of treatment so he did not have confidence it would succeed the second time.

“I decided I wanted to treat myself with a healthy lifestyle,” de Gruy said.

Even though de Gruy knew he could improve his eating habits, he was never averse to healthy options. The menu at Phil’s Grill featured items that were approved by Ochsner’s Eat Fit program. He maintained an active Facebook presence and had many followers. When he posted his plans to fight his cancer post-surgery with a healthy lifestyle, Molly Kimball, a lifestyle dietitian and the founder of Ochsner Eat Fit’s nonprofit restaurant initiative, replied to de Gruy’s post asking if he knew how to best approach his new goal.

While de Gruy was famous for his burgers, his new diet involves eating a lot less red meat. He still eats it from time to time, just not as often as he did before. He said he largely follows a Mediterranean diet. That involves a lot of fruits, vegetables, beans, yogurts, nuts, olives and avocados. He also eats more seafood.

An improved diet isn’t de Gruy’s only lifestyle change. While he went to the gym before his cancer diagnosis, he “hated” running. In high school, he ran all the time when he was on the wrestling team so he could make weight before competitions. Once he was done with high school wrestling, he avoided running. That changed in early 2018 when a friend dared him to run the Mardi Gras Half Marathon. With only 4 or 5 weeks to train, he decided to do it.

Then in January 2019 (on the same day the New Orleans Saints lost the NFC Championship Game to the Los Angeles Rams), de Gruy completed his first full marathon. Even though his lung capacity remained limited after his second surgery, de Gruy reached the finish line. He said he hit a wall around mile 20, but he encountered a woman runner who was having the same problems. They walked with each other for a while and encouraged each other. They alternated running and walking the rest of the way.

The full marathon would be enough of an accomplishment for many people, but de Gruy does not plan on stopping there. He is going to run the New Orleans Ultramarathon (a whopping 50 miles) in October. Beyond that, his dream is to complete a full Ironman triathlon (2.4 miles swimming, 112 miles cycling and 26.2 miles running). He believes he can do it.

While de Gruy enjoyed his time running Phil’s Grill, he said he currently has no desire to own a restaurant again. He works in a sales job that allows him to spend more time with his family, and his battles with cancer reminded him of how precious that time is.

Scans every six months are still a part of de Gruy’s life. He gets anxious in the week leading up to one of his scans, but otherwise is able to keep thoughts of recurrence out of his mind. At first, he suffered from survivor’s guilt because he survived when other cancer patients he befriended did not. But when a friend’s husband died of cancer, she told de Gruy the world needs hope and that’s the message he should send to others instead of feeling guilty for his good fortune. So he said he takes calls and social media messages from people who’ve recently received cancer diagnoses and are looking for advice.

“You just can’t take your health for granted,” de Gruy said. “There’s a lot of unhealthiness in Louisiana. You’ve got to choose to be healthier. There’s time in the day for you to take a walk or a run.” 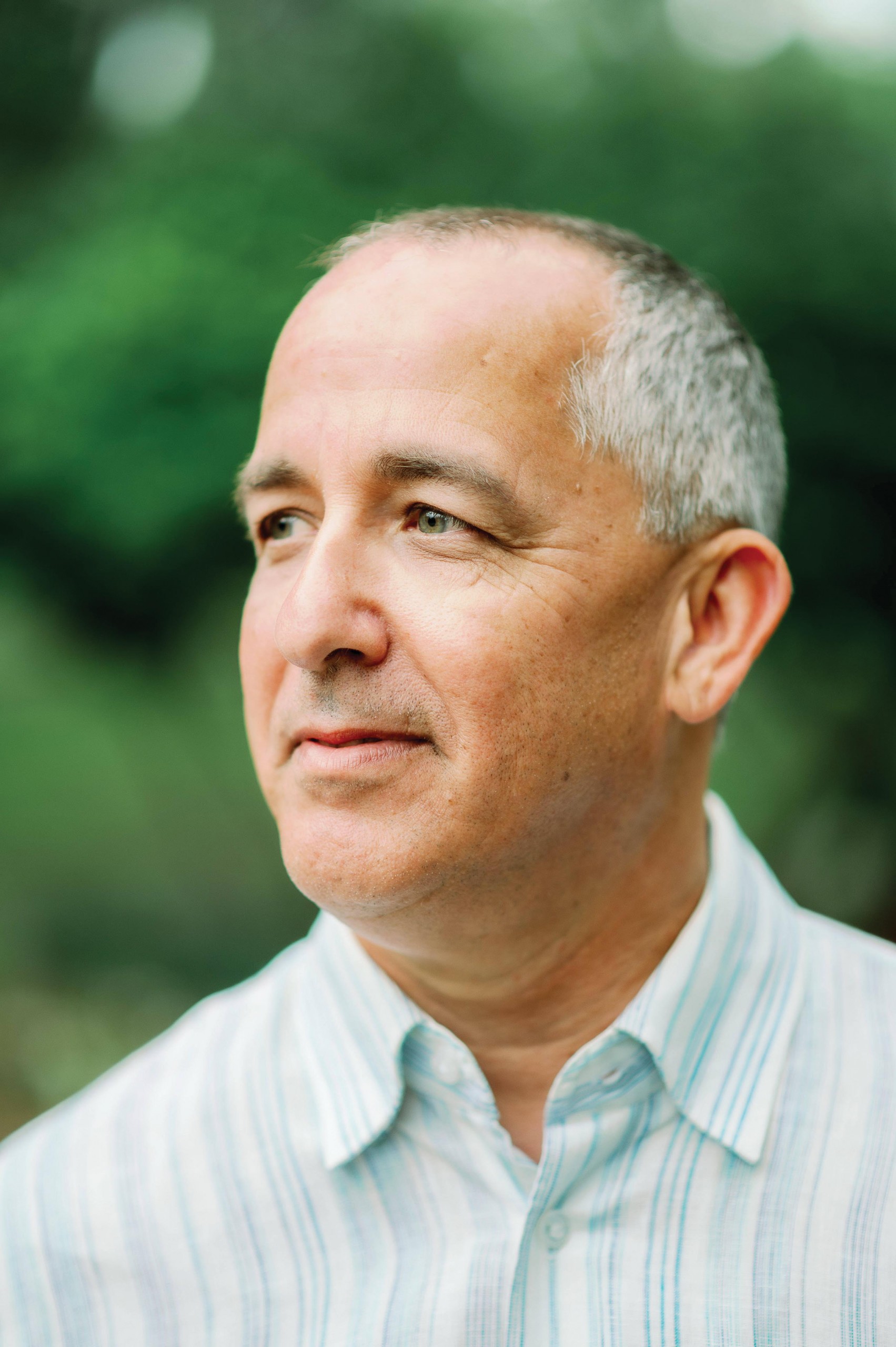 The More You Know

So what is a Mediterranean diet? It doesn’t just mean foods that are common in Mediterranean countries. You will see white pastas, white rice, and white breads in countries like Greece, Spain, and Italy. But for the diet, the emphasis is on whole grains.

What else? For New Orleanians, they will be happy to hear seafood is a staple of the diet. However, it needs to be grilled and not fried. A popular local legume like red beans is permitted, but if you are making red beans and rice you need to substitute cauliflower rice or whole grain rice for the traditional white rice. Dieters are also encouraged to eat lots of plant-based fats and lean proteins.

Kimball said a Mediterranean diet has looser guidelines than many other diets. If you’re someone who feels you’ll never be able to completely quit hamburgers, that’s okay as long as you’re willing to mostly do without them. She likes the 80/20 principle (follow the diet 80% of the time), but with an important caveat. She believes if you try to follow the diet 95-100% of the time, you’ll end up following it roughly 80% of the time, but if you go into it saying you’ll follow it 80% of the time, your success rate will be lower. This is because New Orleans is a city with so many good restaurants and so many social events centered around food that you will likely succumb to temptation from time to time. However, those indulgences won’t be as costly if you set higher benchmarks for yourself at the start.