Distinguished author John Barry compares Louisiana’s two greatest natural disasters and what we have learned from each
John Barry’s book Rising Tide: The Great Mississippi Flood of 1927 and how it Changed America spent six weeks on The New York Times’ best-sellers list and is now being re-released. His most recent book is The Great Influenza: The Epic Story of the Deadliest Plague in History. In 1973, Barry was part of the Tulane University football coaching staff. He lives in New Orleans and Washington, D.C.
In terms of the scope of the disaster, how did Hurricane Katrina compare with the Great Flood of 1927? 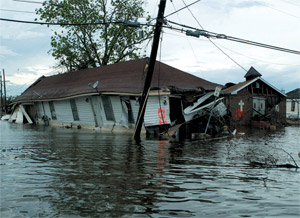 Barry: The two events are comparable in many ways. Both, of course, created vast devastation. The 1927 flood killed people from Virginia to Oklahoma, all within the Mississippi River system, and flooded the homes of more than 1 million people – roughly 1 percent of the total population of the country. 636,000 people were fed by the Red Cross, some for more than a year. 27,000 square miles, more land than all of Connecticut, Massachusetts, Vermont and Rhode Island combined, were covered with water, and the water did not fully drain from some of that land for four months. Although official death tolls from the 1927 flood list “only” 500
killed, a professional disaster expert estimated more than 1,000 dead in Mississippi alone. We don’t know, and may never know, the death toll of Katrina, but that may be worse, even when you adjust for population. The big difference, of course, and this is huge, is the devastation of one of the world’s great cities. 1927 put New Orleans into a slow economic squeeze, and one could argue the city has never really recovered. There was nothing slow about Katrina, and we don’t know yet how the city will respond.
It remains to be seen whether Katrina has as broad and deep a political and social impact as the 1927 flood did. 1927 changed the way people thought about government’s responsibility toward individuals, elected a president (Herbert Hoover), moved hundreds of thousands of blacks north, began the shift of blacks from the GOP to the Democrats. Katrina certainly will have some impact beyond itself, for example in the way people view the environment and nature’s force when they develop something. Obviously, places such as Baton Rouge, Lafayette, Jackson and everywhere in between will be affected by migration – probably Houston, Dallas, and elsewhere as well. But will the whole nation change? Katrina is already having some political impact. But we’ll have to wait at least until the 2006 elections and probably longer to see if it changes the way people think in a large way.
Were there any lessons from ’27 that were ignored in 2005? 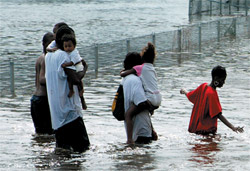 Barry: It’s not so much that lessons from 1927 were ignored, (but that) people got complacent. In 1927, the U.S. Army Corps of Engineers insisted upon a simply lunatic flood-control policy, and New Orleans interests screamed at the top of their lungs in protest. No one listened. Ironically, of course, everyone but New Orleans got flooded in 1927. This time around was a little different. Everyone recognized the danger. Everyone talked about it. But no one – at least no one with the political power to change anything – had the necessary sense of urgency to fix it. I hate to say this; I like and respect many members of the congressional delegation, present and past. Nonetheless, had our vulnerability been the No. 1 priority of the delegation, it probably would have been addressed. Going back to (U.S. Rep.) Eddie Hebert and (U.S. Sen.) Russell Long, Louisiana has had a very, very powerful delegation, and it was continuously so until the retirement of Billy Tauzin and John Breaux. So I’m not just talking about current members of Congress, who, because of lack of seniority, not lack of talent, may be the weakest we’ve had in decades.
The Corps itself clearly made some serious mistakes, such as exposing the drainage canals to Lake Pontchartrain. Problems had been pointed out in advance, but again, they weren’t addressed. Perhaps more importantly, there are those who believe the power of the storm as it struck the city was not enough to overwhelm the levees. They think if the existing flood-control system had worked as designed, it would have contained Katrina, that the storm surge in the lake was only equivalent to a strong category 2 hurricane. The Corps disputes this very, very serious charge and says the storm was enormously powerful, even the edge that caught New Orleans. An investigation will resolve this definitively. Then there are the issues of MRGO (Mississippi River Gulf Outlet), coastal erosion, etc. But coastal erosion has nothing to do with the storm surge in the lake.
Even if the Corps is correct, and this storm was stronger than the levees were designed to protect against, why wasn’t the level of protection set higher? Part of that goes back to (President) Carter’s administration, when environmentalists blocked the construction of gates closing the lake off from the sea. Plus, people consider flood control pork. Building a bridge is pork, or at least may be. Flood control to save lives and property is not pork. And, of course, right up to a few months before the storm, Bush was making unbelievable and catastrophic cuts in the flood-protection maintenance budget.
I think we’re all a little angry now. This was not Pompeii. This was something containable. The disaster itself, not simply the response of FEMA, etc., was man-made.
Is it possible to develop a perfect plan to survive a perfect storm?
Barry:Yes.
OK, you don’t want a one-word answer. New Orleans can be made safe. Equivalent engineering feats have been accomplished elsewhere. The plans are out there already. We just need to do it, but we need to do it right. To paraphrase a line from my book, nature is perfect. Man is not perfect. If man makes a mistake when he confronts nature, nature will find it and exploit it. And building the right projects isn’t enough. It needs maintenance. 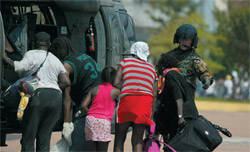 After Katrina, what message do you have for Louisianians?
Barry: That question kind of makes me laugh, as if I have any special insights. I’m not that smart. Part of me wants to respond like the football coach I once was (Tulane 14, LSU 0) and talk about not quitting. Part of me wants to quote LeRoy Percy, one of the characters in Rising Tide, who looked around at the devastation and said in 1927, “Sometimes you find that you have overestimated a disaster. I see nothing to indicate that this is the case. The road ahead of us is a long and very rocky one.”
And part of me just wants to go home because very definitely home is New Orleans. Right now I am, I think, realistic about the difficulties but optimistic nonetheless. The possibility really does exist to rebuild and to make it a better place. Some of what happens depends on Washington and the people there who want to use us to experiment with their ideas – and some of those ideas may be good ones – and some of it depends on how politicized all this gets as time passes. But whether we actually do succeed in the end is mostly up to us, as it usually is.