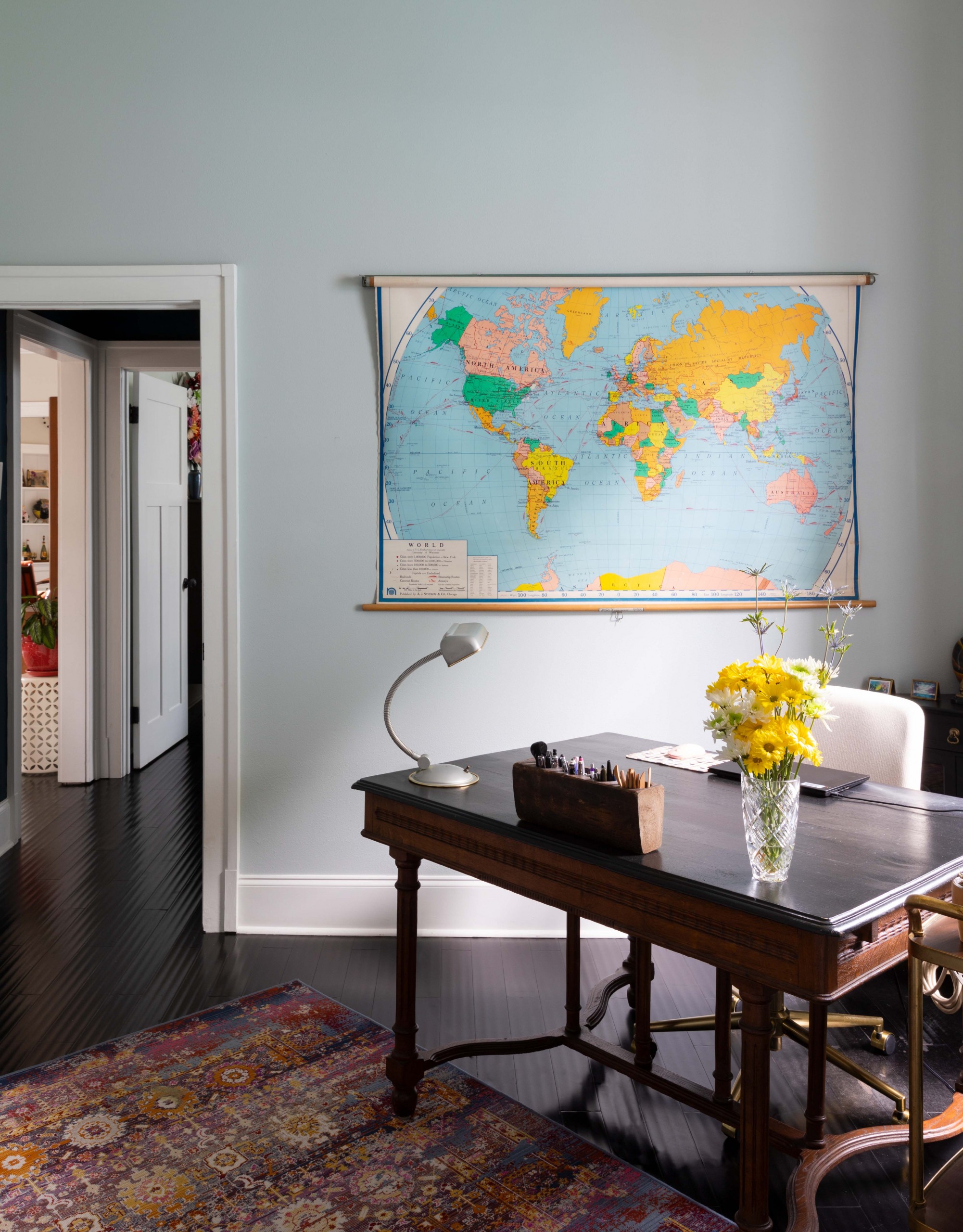 Nicki’s office desk is from Roussel’s in Ponchatoula, the map from an antique store in Pittsburgh.

Houses have a way of finding their owners. Artist Scott Sturgill and his wife, Nicki, a research analyst, weren’t looking for a house when a realtor cold-called them about a listing around the corner. After viewing the house online, the couple went to see it in person and made an offer on the property within hours.

“Within 20 minutes [of going to see the house], we were discussing where furniture would go,” says Scott.

According to Nicki’s research, their corner lot originally contained two separate buildings – a tiny store and a shotgun house, both built between 1900 and 1910. In the 1940s, the store was torn down and an addition made to the house, turning it into a single bungalow-style residence. Architectural features from the forties include wide, leaded glass windows with a pattern of interlocking circles, glass-front display cabinets, and seat-like window ledges that were an instant selling point as sunny perches for the Sturgills’ cats, Roch and Sylvie.

In 2009, previous owners gutted and renovated the house. When the Sturgills purchased it in 2018, kitchen, baths, floors, roof and foundation had all been renewed. The only things needed were cosmetic improvements such as paint and light fixtures.

Decorating the house proved as smooth a process as buying it. Husband and wife share an appreciation for midcentury modern designs, which they began collecting when they lived in Brooklyn, as well as a love of whimsical, offbeat finds that add fun and meaning to their surroundings. Moreover, the furnishings they already had fit well in the new house, with the exception of a large sofa that moved with them over the years from various houses and apartments.

The couple brought cohesion to the open living room, dining room and kitchen by using a single wall color and adding pops of orange (Scott’s favorite color) and dusty turquoise, which is carried through to the rest of the house. In place of the former large sofa, they created a cozy conversation space comprised of a smaller sofa, a coffee table and a pair of chairs in the center of the living room.

The antique and midcentury furnishings are complemented by modern lighting, contemporary art, including works by Scott, and unusual pieces that speak to the Sturgills. The dining room’s French crawfish diagram was picked up at an antique map store in Brooklyn when the couple decided to move to New Orleans. A postcard rack found on eBay contains postcard mementos from the Sturgills’ travels. There are vintage Sputnik decanters, retro jewel tone vases, a framed image of an alien head (a quirky bit of street art from New York City), an old writer’s desk with extendable side shelves, and a functioning 1970s toaster among other objects. Because the Sturgill’s, who met and married in their hometown of Cincinnati, are members of Mardi Gras krewes, the display cabinets flanking the dining room window are used to house Mardi Gras throws and memorabilia.

“I love when people come over and you see them looking at the objects we have,” says Scott. “They’re a collection of our memories but we want to share that with other people. Most of the objects in our house have a story to them.”

“That was a conversation we had long ago,” says Nicki. “When we bought something, it would mean something.”

Recently, the couple added custom bookshelves designed by their friend and interior designer Nadia Tarbah of ND Studio to Nicki’s office. But small projects and updates aside, the house itself may have been the wisest and most meaningful purchase of all.

“We’ve never had a day of buyer’s remorse,” says Scott.