Already, the familiar menu tastes a bit different. Breakfast sandwiches now include house-made Cajun sausage and plate lunches include fresh seasonal vegetables. Grocery staples will remain on the store shelves but house-made pickles and condiments will soon be offered, as well.

Many first became familiar with Rodriguez in 2011 when the wiry man with the fine Cajun lilt appeared on Anthony Bourdain’s “No Reservations.” The climax of the show was a traditional boucherie led by Rodriguez.

In the years since, Rodriguez has travelled the world sharing the art of the boucherie.

“But I’ve longed for a place of my own, a place to settle down,” says the Grand Coteau native.

Over the course of the next year, an evolution will take place as a new look, new offerings, and a new name take hold.

Rodriguez, a skilled builder, is doing the work himself, adding a full-service butcher shop inside, a deck with a meat smoker outside and a wine bar and restaurant in an attached building that once housed a speakeasy. The wine bar will be called The Superette. The grocery and deli side of the business will be called Lâche Pas. 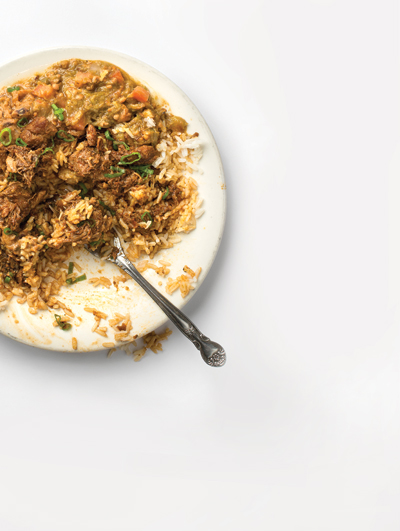 “Sometimes the most flavorful cuts of meat are treated with a lack of respect, and so it goes with organ meat,” Rodriguez says. “In the royal court of protein, the king of organ meat culmination is, of course, the swine divine. Once considered a poor man’s dish, pork fraisseur’s has crossed the tracks as a meal of true depth. It is both perfectly simplistic and shamelessly indulgent, richly layered in a symphony of carnivorous complexities.”

Rodriguez suggests serving this with a side of slow-cooked purple hull peas with pork tasso, a sugarcane vinegar and mayonnaise cabbage coleslaw, and “an ice cold Schlitz at the table is always a nice touch.”

Add 1 pork liver, cut into 1-inch cubes to the marinade for 4 hours, keeping it segregated from the other organs. Remove the liver, reserving the marinade, and season with cayenne pepper, sea salt, course black pepper, garlic powder and onion powder as desired. Set aside, refrigerate.

Add 2 whole pork cheeks and 2 whole pork tenderloins to the reserved marinade for 4 hours, keeping it segregated from the other organs. Remove meats and season with cayenne pepper, sea salt, course black pepper, garlic powder and onion powder as desired.

Heat the remaining ½ cup olive oil to a large cast iron Dutch oven over high heat just to the point of smoking. Sear the cheeks and tenderloin until dark brown. Blackened edges are acceptable and encouraged. Set aside.

Add 1 pork tongue, boiled, scraped, and cut into 1-inch cubes, the kidneys, heart and spleen and cook until dark brown. Do not over-sear to the point of protein breakdown. Remove from the pot.

Strain any charred remnants of protein from the oil and rendered fat and return the pot to low heat. Add the 1 head garlic peeled and sliced thin and sauté until golden. Add 4 onions, 2 bell peppers, and 1 bunch celery (all diced) and sauté until translucent and medium brown. Add the 4 ripe tomatoes (diced), 4 jalapenos (minced) and 1 bunch flat leaf parsley (minced). Cook down until liquid is sparse and the contents of the pot sticks.

Add the liver and 1 cup of red wine to the pot, using the wine to deglaze, scraping browned bits from the bottom of the pot. Cook the liver until it breaks down and thickens into a gravy. Return all other protein and organs back into the pot, allowing its contents to stick periodically while deglazing with 4 cups vegetable stock. This process is vital to the quality of the gravy. It gives the desired color of the sauce and provides multiple layers of intensity of taste. Do not burn, this mistake can quickly become irreconcilable.

When the desired color and consistency have been achieved, add enough water to just barely submerge the proteins. Reduce heat to low and cover. Simmer for at least 2 hours. The longer it cooks, the deeper the flavor. Season as desired with additional sea salt and cayenne.