According to the poet Ralph Waldo Emerson, “nature always wears the colors of the spirit.”

Over the years, Breaux Bridge’s transcendental photographer Lynda Frese has traveled the world, studying religions, mythologies, early goddess cults and the classical world of medieval Europe. She has visited prehistoric cave paintings, photographed megalithic sites in France and the sacred valley of Peru, and explored the natural and spiritual landscape of Louisiana in search of Emerson’s “colors of the spirit.”

In a sense, these journeys and resulting photographs are portraits of self-discovery and self-reflection. Through her art, we accompany her on these journeys. Regardless of where she goes in that search, Louisiana-themed images continue to float in and out of her work.

“The ancient sites of human culture have been a subject in my photography for decades,” says Frese. “But I also photograph the wilderness of my own backyard of Louisiana. These are the places, stretching back into prehistoric times that represent our cultural and natural heritage. The images from these places have been a kind of bedrock for my work.”

In 2015, for instance, Frese spent a year as an artist-in-residence at the Shadows-on-the-Teche in New Iberia where she created an impressive body of photo-collages that drew upon the history and people who once inhabited that plantation. In her series “Art and Shadows,” faces of long-dead members of the Weeks family who owned the Shadows and the enslaved African Americans who worked the land moved in and out of her collages like specters in a dream.

In her 1990s series “Reconstituting the Vanished: Gender, Memory and Placemaking in the Delta South,” Frese worked with Virginia Tech professor Barbara Allen to explore the lives of four notable women in Louisiana history. One was Caroline Dormon of North Louisiana who worked to preserve the state’s old growth forests. The second was the 18th century former slave and later free woman of color and plantation owner Marie Thérèse, called Coincoin, from the Cane River area near Natchitoches. The third was the 19th century Micaela Almonester, Baroness Pontalba, who constructed the Pontalba Apartment buildings in New Orleans, and finally the spiritual voodoo practitioner Marie Laveau.

In multi-layered photo-collaged compositions such as “Bewitchment” alluding to Coincoin and “La Clairvoyante” for Marie Laveau people are not seen but their spirits fill the images.

Frese has been on this long spiritual and artistic adventure throughout her career. Born in Jacksonville, Florida, to an unwed mother, raised in New York and Rhode Island by adopted parents, Frese studied art at the University of California, Davis, where she received a master of fine arts degree in 1986. She also attended the Skowhegan School of Painting and Sculpture in Maine, where she was influenced by the teachings of the American mythologist Joseph Campbell.

After college, she joined the art faculty at the University of Louisiana at Lafayette where she taught until retirement in 2016. Fluent in French, she lives in Breaux Bridge just a few blocks from Bayou Teche.

“I thought I’d be here a short time and then move on,” she said in a 2015 interview. “But Louisiana got me and I stayed. I love the music and the Francophone culture and language. There’s a certain kind of worldliness about Louisiana that appeals to me. It certainly has influenced my work. There’s also a kind of pagan lust of living on and off the land here.”

In creating her images, Frese prefers the photo-collage process rather than traditional documentary-styled photographs. Like painting, a collage is more about the artist’s imagination than what lies before the camera lens.

“The scenes in my head are not available in straight photography,” she says. “In collages, I can place images that don’t necessarily belong together to create a powerful narrative.”

To create her visual stories, Frese juxtaposes elements from her own photographs with images from old magazines, glass slides, prayer cards and postcards that she finds in flea markets and what she calls “weird kiosks.”

Once the collage is completed, she paints over the surface with egg tempera, an ancient form of paint consisting of color pigments mixed with egg yolks. She buys only eggs local to the scenes she paints, which she says is critical to her work.

“It becomes a connection with the local bio-region,” she says. “When I work, I think about the land. I appreciate being present in the place where all this has happened.”

Being “present in the place” has brought her critical acclaim. In 2016 the Louisiana Office of Cultural Development named her “Artist of the Year.” In addition, Frese has held artist residencies in Italy, including the American Academy in Rome, the Arte Studio Ginestrelle in Assisi, the Rockefeller Foundation Bellagio Center, and the Liguria Center for the Arts and Humanities near Genoa. Her photo-composites are in museum collections across the nation and the list of her exhibitions in North America and Europe is quite long.

Although awards, fellowships and exhibitions are important to an artist’s career, art itself defines Frese. She is now taking that art in new directions.

“In my current work, I adopt some of the palettes and compositions of the early Italian masters and borrow the visual language of religious art to speak about nature,” she says. “I have sometimes called this series ‘Plant Kingdoms in Antiquity.’ For example, in my piece ‘Arugula Icon,’ the plants are hovering in the temple and ringed with halos. It’s one example of how I am using Catholic tropes to speak about our relationships with the natural world, and about the idea of finding sacred ground.”

“In these pieces I imagine Dylan as a kind of pilgrim,” she says. “They have autobiographical elements and sometimes have included my dogs. These pictures are about icons and stars, and the masks of god. For me, they are about the intimacies of singing and being sung to, the experience of the artist or troubadour – the boredom and weariness, the devotion and desire.”

Whether traveling to remote civilizations or exploring the iconography of Bob Dylan or the tropes of Catholicism, Frese gives form to the natural and spiritual worlds that ebb and flow in her imagination.

“It is important, to create new myths around the natural world, so we won’t die,” she says as she glances across the gallery where her photo-collages hang, waiting to challenge viewers and their own sense of self. 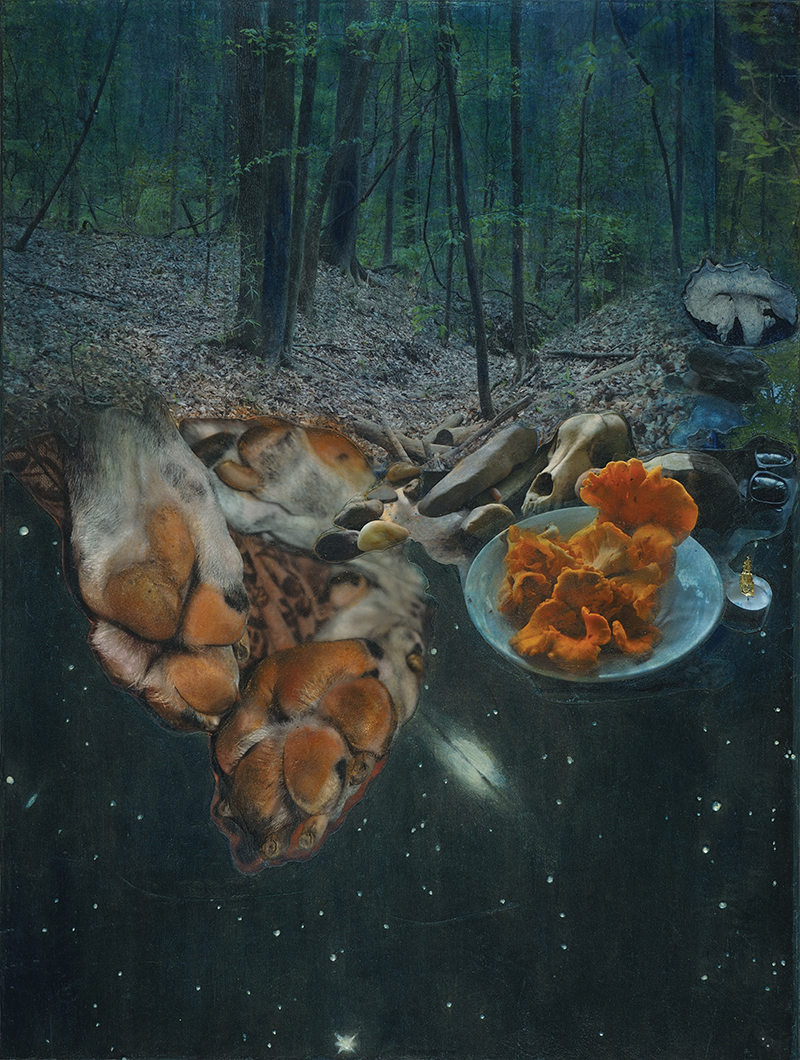 ARTSPACE. “Critical Mass 6 Best of Show Visual and Literary Winners Solo Shows.” Features the art of Joshua Chambers and the literary work of Katie Beckham in this Best Of exhibition. artspaceshreveport.com

Louisiana Art & Science Museum. “Feast for the Eyes: The Story of Food in Photography.” Exhibition explores the rich history of how food has been photographed from the late nineteenth century to present day. lasm.org

Masur Museum of Art. “55th Annual Juried Competition.” Juried exhibition features the artwork of contemporary artists from across the U.S., working in a variety of media. masurmuseum.org

R. W. Norton Art Gallery. “Enlist! Art Goes to War, 1914-1918.” See what life was like in Shreveport and Caddo Parish during World War I and how artistic posters were used to urge men to enlist and women to become nurses and join the Red Cross. rwnaf.org

Meadows Museum of Art. “Devil in a White City.” Features large-scale paintings by Lavar Munroe portraying subjects deemed to be devils in current world affairs as opposed to actual perpetrators of evil. Also, “Aún Recordamos Aquel Hogar.” An investigation into the use of place as a character in visual narrative, through the artwork of five contemporary LatinX artists. centenary.edu/campus-community/meadows-museum 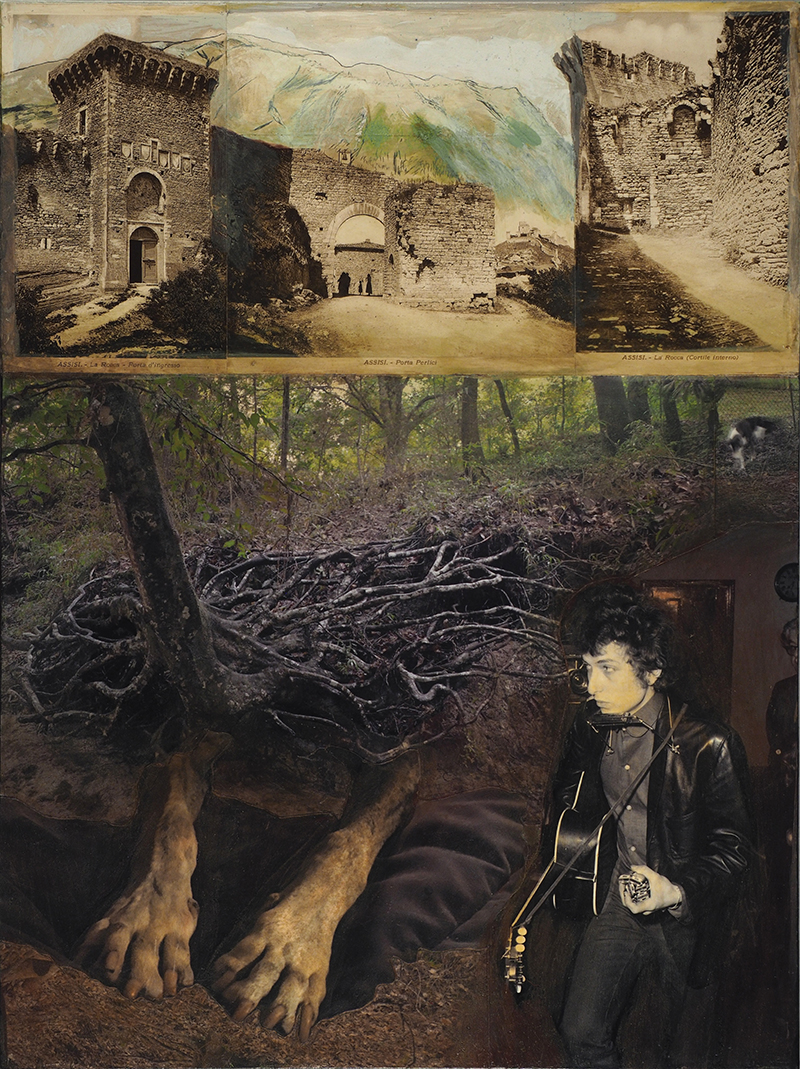 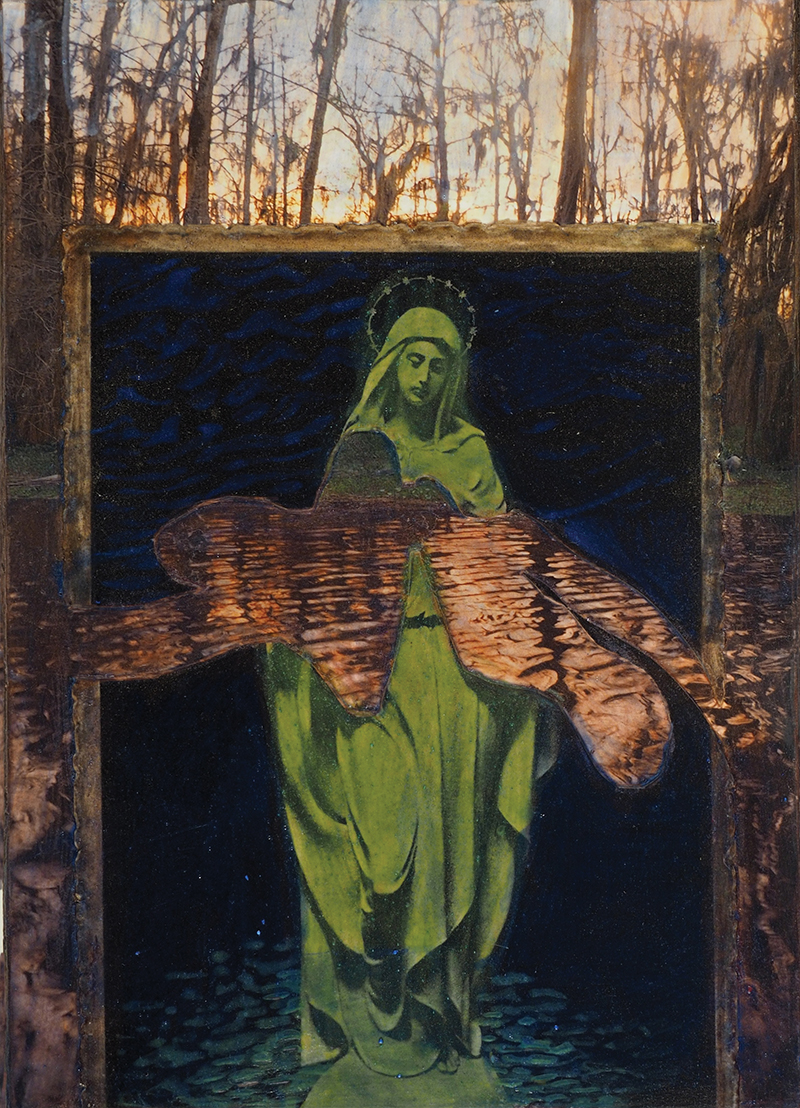 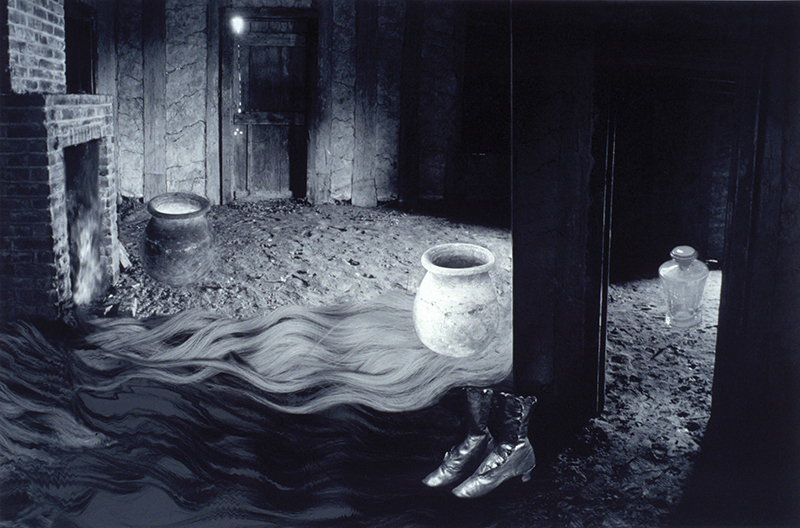