Before his company created Better Homes & Gardens and other memorable magazines, Edwin T. Meredith covered America’s farms. Almost exactly 100 years ago he was reporting on transportation trends, noting the rise of the automobile and the completion of the Panama Canal as key to the future of America’s growth — with good reason. Quality roads were hard to come by in the early 20th century.

A National Auto Trail system had been created to connect highways in both the United States and Canada, some marked by logos on telephone poles. For the most part, however, organized highways remained few and far between.

Meredith came up with an idea, to build a highway from Winnipeg, Canada, to New Orleans through the heart of the Louisiana Purchase territory and name it for the president responsible for the original land transaction. Farmers would utilize the highway for moving crops to market. Tourists would travel through cities and back roads, bringing commerce to both large and small communities.

It would be called the Jefferson Highway, linking 264 communities.

A meeting to discuss such a plan was called for Nov. 15 to 16, 1915, in New Orleans by the New Orleans Association of Commerce. Invites were sent to 750 state and local governments, Good Roads groups (advocates for improved roads), automobile clubs and other community organizations.

Organizers expected a small group of concerned citizens to arrive in the Crescent City that fall but more than 500 people from 11 states arrived.

“When organizers met in New Orleans in November of 1915 I think every state in the Midwest was there because they knew it was going to be successful,” said Glenn Smith, president of the Jefferson Highway Association, an organization dedicated to preserving and improving the historic road.

Thus, the Jefferson Highway was born. 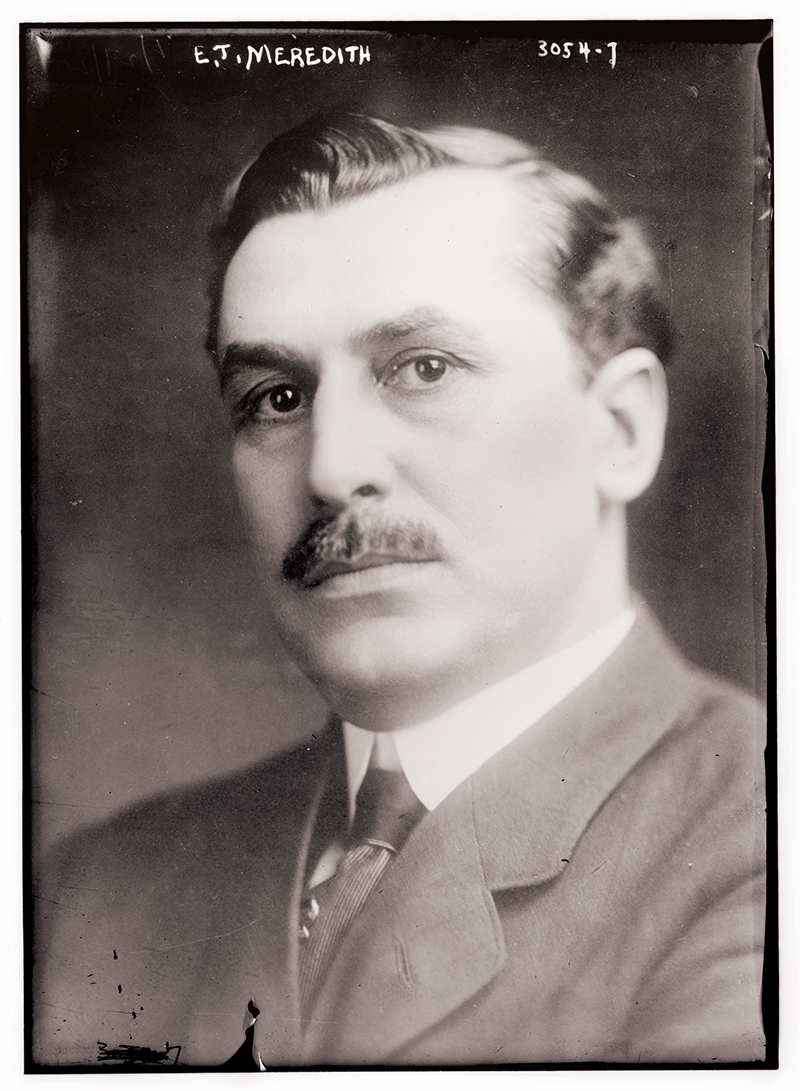 Edwin T. Meredith came up with an idea, to build a highway from Winnipeg, Canada, to New Orleans through the heart of the Louisiana Purchase territory and name it for the president responsible for the original land transaction. Farmers would utilize the highway for moving crops to market. Tourists would travel through cities and back roads, bringing commerce to both large and small communities.

When organizers began the highway at that 1915 meeting in New Orleans, only the key cities were agreed upon. They were Minneapolis and St. Paul, Minnesota; Des Moines, Iowa; St. Joseph and Kansas City, Missouri; Muskogee, Oklahoma; Denison, Texas and Shreveport, Alexandria, Baton Rouge and New Orleans in Louisiana.

The original idea of a highway through the Louisiana Purchase territory wasn’t logical for the Arkansas mountains, said Smith. Texas and Oklahoma proved easier to navigate so the Jefferson Highway curves west at Shreveport, then east again into Missouri and north toward Winnipeg through Iowa and Minnesota.

Once the cardinal points were chosen, the organizers left the rest of the route to the counties and townships.

“These cities or towns were to be on the highway and future meetings and road development would determine the specific routes between the cardinal points,” Smith said. “At the time, there were no highway departments. It was up to local governments and local people. It was quite unique, even for that time in history.” 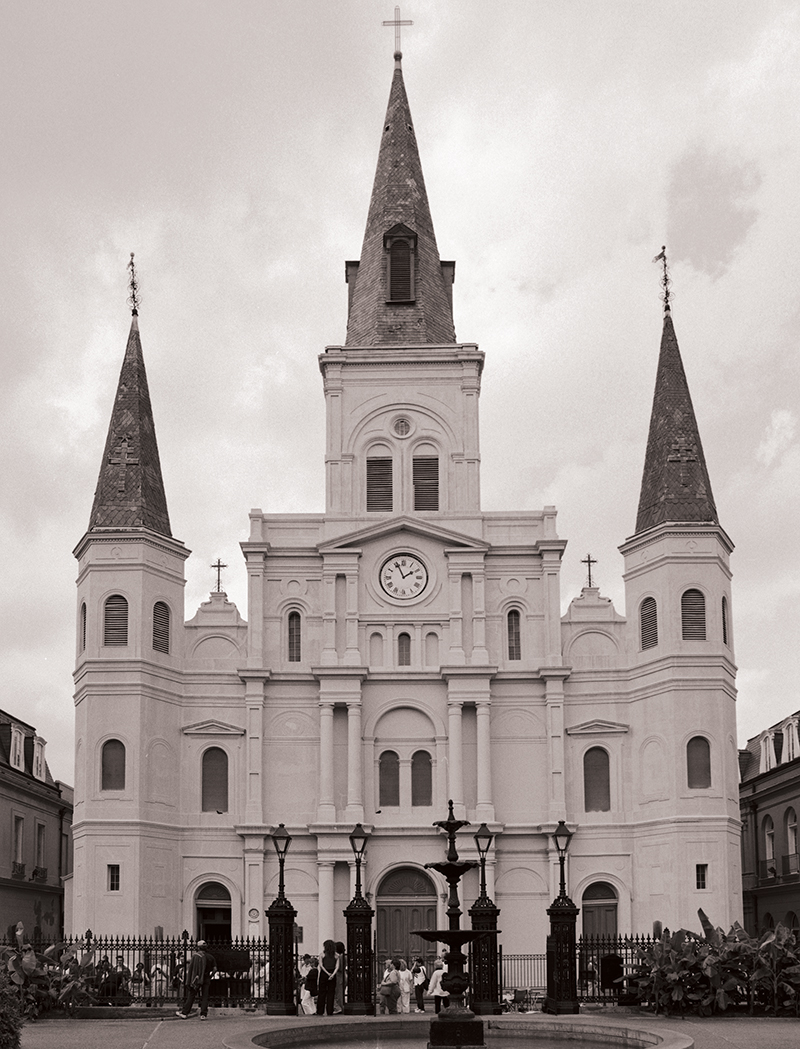 In 1915, the same year hundreds gathered in New Orleans to discuss the formation of the Jefferson Highway, the Orleans-Kenner Electric Railway was established from Canal and Rampart to the St. Charles and Jefferson Parish line. The “O-K Line” railway cars resembled trolleys with room for farm produce and traveled along what is now Jefferson Highway from the Orleans Parish line to Kenner.

“An act of great foresight by the O-K Line owners led to the creation of Jefferson Highway as it is today,” wrote Earl J. Higgins in “Metairie, Ames, High: The Streets of Jefferson Parish.” “When the railroad company acquired the land to lay tracks and build stations, it bought a corridor 100 feet wide, 30 feet for the tracks and 35 feet on either side for further use and development. Those buffer and expansion strips would later carry motorized vehicles alongside the railway cars. The O-K Line continued until 1930, when buses replaced them on what had become Jefferson Highway.”

Jefferson Highway in Jefferson Parish, both historic and present, ends at Kenner, where the O-K Line also concluded. The road merges with Third Street and heads into St. Charles Parish, then follows the River Road all the way to Highway 73, which turns north toward Geismer, Dutch Town, Prairieville and a neighborhood known as “Old Jefferson” in southeast Baton Rouge.

Heading west, the highway dissects Baton Rouge with parts still carrying its name, travels along Government Street downtown, then crosses the river into Port Allen where it parallels Interstate 10 through Rosedale and Maringouin. After turning north toward Livonia and Fordoche, the highway crosses the Atchafalaya River at Melville and eventually follows the “Old Baton Rouge Highway” into Alexandria, where it becomes Jackson Street before crossing the Red River into Pineville.

The northern section of the Jefferson Highway curves every which way, passing through the small towns of Tioga, Colfax, St. Maurice and Clarence before becoming the Winnfield Highway and curving above Natchitoches, crossing the Red River once again. The road takes visitors into Natchitoches and along its famed historic Jefferson Street, the name of which dates back to the highway’s origination.

Heading west out of Natchitoches, Jefferson Highway overlays the Old Spanish Trail, or El Camino Real, to Robeline where it turns north on Highway 120 to pass through Marthaville, then north on Highway 175 to Pleasant Hill and Mansfield before entering Shreveport. The final stretch leaves downtown Shreveport and backtracks on Highway 79 west, then Highway 80 to the Texas state line. 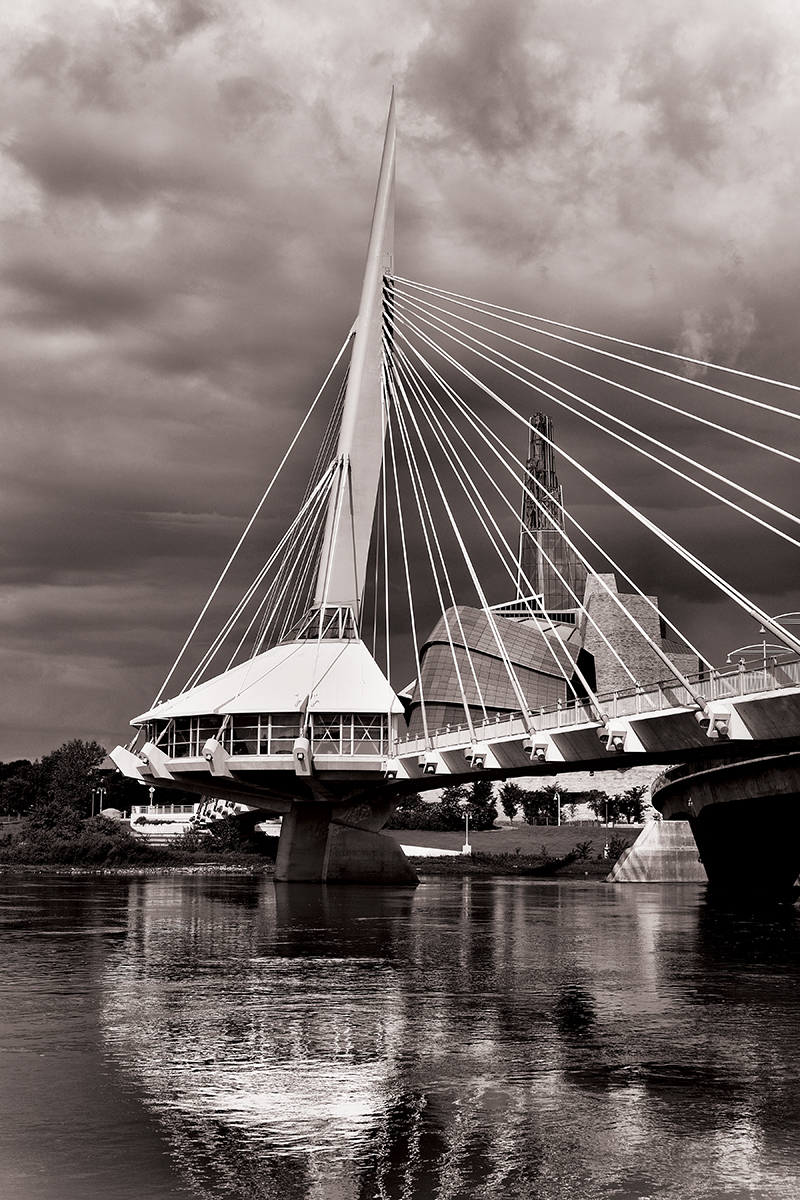 In addition to getting farmer’s produce to market, the international Jefferson Highway was created for tourism, Smith explained.

“Meredith’s big thing was to go north in summer and south in winter,” he said.

In late 1917, the premier of Manitoba, the mayor of Winnipeg and two other Canadian government officials traveled the highway’s 264 cities, towns and village in a Hudson Super-Six auto. They drove 2,267 miles at an average of 20 miles an hour, according to the December 1917 issue of the Jefferson Highway magazine, The Declaration.

In September of 1919, the mayors of New Orleans and Shreveport, along with other Louisiana officials, drove north to Minnesota to span the Mississippi River at its source, their journey documented in The Modern Highway, a publication of the Jefferson Highway Association. A collection of cars sporting Louisiana emblems could be seen parked inside Minnesota’s Itasca State Park.

Today, Smith estimates a drive along the entire highway would take two to three weeks by those who love to traverse historic roads slowly, stopping along the way to enjoy local culture. When the organization meets in Natchitoches for its biannual international meeting, plans are to visit Grayson’s barbecue in Clarence and the historic Bentley Hotel in Alexandria.

“If a person’s not in a hurry, the Jefferson Highway’s a great trip going through those interesting little towns,” he said. “And we are the kind of tourists that are really valuable to those small towns.”

Smith loves history, and while researching the Oklahoma Range Wars years ago he stumbled upon mentions of the old highway.

“Every time I pulled up an article I would read about the Jefferson Highway and forget what I was researching,” he said.

Intrigued, he joined the Jefferson Highway Association, served on the board and wrote articles for its newsletter. This year he leads the organization when they meet in Natchitoches.

Smith admits that most people have heard of Route 66, one of the first interstate American highways that connected Chicago to the West Coast beginning in 1926. But with better highway markers and more educational outreach the Jefferson Highway may see its day in the sun as well. Iowa has been steadfast in marking the historic road, he said, and plans are in the works to outline the routes in other states. The organization offers an interactive map on its website so drivers in all states and Manitoba may plot exactly where the original highway existed.

“We like to say we’re the first international highway in the Mississippi Valley,” Smith said. “Our hopes and goals are to basically capture what Route 66 has been able to do and make it an interesting drive. We hope we can revive it and make it interesting too.” 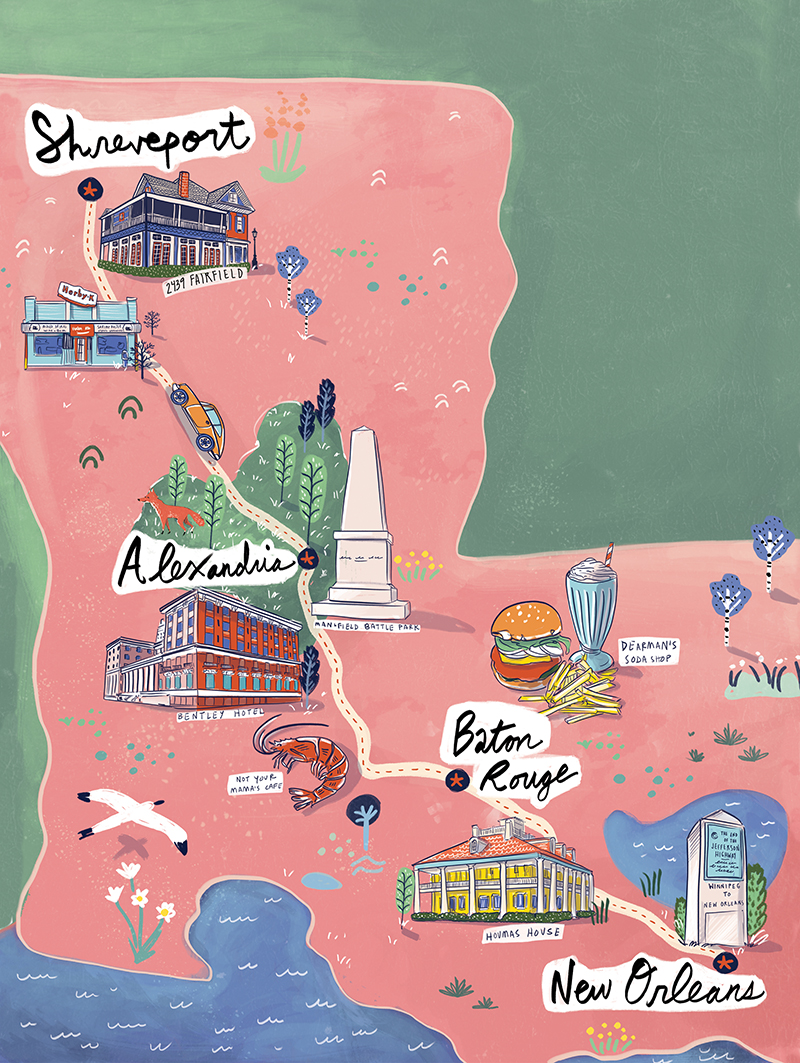 Start in the city’s Central Business District and the astute monument marking the spot at the corner of Common and St. Charles. Travel up Canal Street to City Park and the cemeteries, head west on Metairie Road and connect to Jefferson Highway via the Causeway before continuing west to Kenner. Once inside St. Charles Parish, the highway follows the winding River Road, which takes visitors past numerous plantations and other historic sites, great restaurants and fun accommodations.

To stay and/or dine:

Visit Houmas House for its 38 landscaped acres and massive historic home but don’t miss the award-winning Latil’s Landing, the elegant Carriage House with its exquisite architecture or a signature cocktail in the Turtle Bar, located inside an original garconniere.

Located right on Jefferson Highway in the heart of Baton Rouge is Dearman’s Soda Shop, which serves up American fare like hamburgers, fries and milkshakes in a retro atmosphere.

After crossing the modern Mississippi River Bridge into Port Allen, follow the old Jefferson Highway by heading west on Highway 76, known as the Rosedale Road. Visitors will cross Bayou Grosse Tete at Rosedale, passing the historic Rosedale Cemetery and several historic homes along the way. Turning north toward Livonia, you’ll pass the old Joe Dreyfus Store which now stands closed. It was, no doubt, a site where folks in Model A Fords paused for a cold soda.

Not Your Mama’s Cafe in Livonia with its many dining rooms, expansive bar and patio seating attracts tourists and residents alike for its Louisiana seafood.

The majestic Hotel Bentley in downtown Alexandria lorded over the Jefferson Highway in its heyday. Built in 1907, the hotel was a downtown landmark and the place to see and be seen. Today, the magnificent hotel has been lovingly restored and offers a restaurant and the Mirror Room lounge.

Take your time on this stretch and enjoy the unique sites found along the way. Stop at the Grand Encore overlook above Natchitoches, a rare dramatic bluff overlooking the Red River, then roll into Louisiana’s oldest town and soak up the charm that is all Natchitoches. Country music lovers will not want to miss the Louisiana Country Music Museum at the Rebel State Historic Site in Marthaville and history enthusiasts will enjoy the Mansfield Battle Park and Museum, the site of the last major Confederate victory.

Remain on the “Mansfield Road” to follow the old Jefferson Highway into downtown Shreveport, where restaurants, casinos and attractions await.

To keep in the historic feel of the day, choose 2439 Fairfield — “a Bed & Breakfast.” Built in 1905, the elegant Victorian colorful inside and out provides the perfect repast on your journey. Plus, there’s a delicious breakfast to get you started on the last leg of the highway.

Shreveport restaurants that date back decades include Herby K’s with its fresh seafood and friendly atmosphere or Eddie’s Restaurant, known for its famous stuffed shrimp.