Shreveport attorneys Lisa and Gary Love had a kitchen update in mind when they called designer Myron Griffing for a consultation. Instead, Griffing, owner of Space Interiors and a monthly design columnist for Shreveport’s City Life Magazine, suggested the couple’s time and dollars would be better invested in a refresh of their downstairs living areas. The kitchen could be renewed with a few cosmetic improvements such as paint, he reasoned, but the foyer and entertaining areas, last decorated in the early 90s, were in need of a reboot. The Loves, parents of three grown children and now empty nesters, agreed and are happy they did. Today, their home’s once busy, antique-filled interior marries their love of traditional with current trends and with Lisa’s desire for a toned down reinterpretation.

Griffing advised the clients to search magazines and websites like Houzz for “inspiration pictures” that conveyed the look they wanted. What emerged from the photos they selected was a home with a more transitional design scheme, Griffing’s speciality. At his urging, the Loves sold a variety of their furnishings at a high-end consignment shop, repurposed a piece by moving it to the foyer, held on to select family antiques and filled in with new pieces where needed.

“Space Interiors is all about the mix,” says Griffing. “High with low, modern with traditional. We want our rooms to look collected over time and not just purchased.” 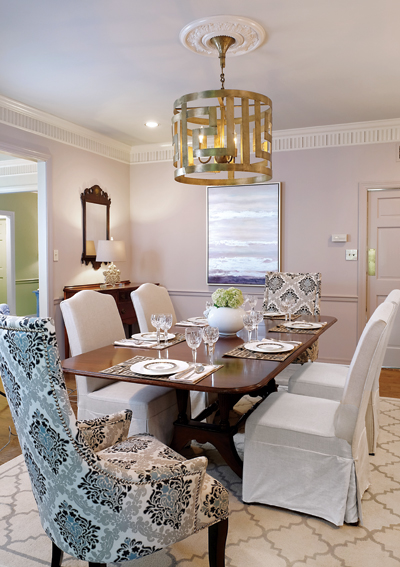 The walls and moldings, previously painted in brights and whites respectively, are now seamlessly bathed in soft neutrals providing a quieter foundation. The living room’s huge patterned rug was likewise swapped out for a more muted effect — this time achieved with three separate rugs that delineate different areas of the room. For the furnishings, Griffing stayed with shapes that were in sync with the house’s classic Georgian bones, but added a twist by using more modern fabrics and opting for restraint where an abundance of layers once prevailed. Lastly, he added statement lighting and contemporary art from a variety of Shreveport galleries.

“We gave them a more subtle, modern version of what they were accustomed to,” he says. “Everybody is unique, so their rooms should look unique and individual.”

By shopping off the retail floor rather than relying on custom orders, Griffing was able to complete the Love’s remodel in just two and a half months.

“I want [clients] to be able to touch it and feel it and experience it right off the bat because it’s going in their home,” says the designer.
The Loves, who enjoyed the easy collaboration with Griffing, say the refurbishment has changed the way they live at home.

“We never used the living room because it felt so formal,” says Lisa. “Now it feels so much more inviting, we enjoy the whole house.” 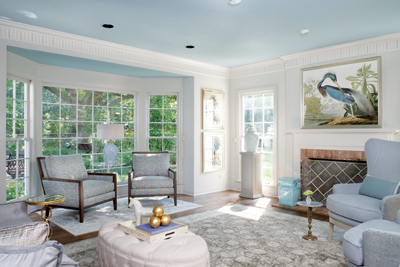 The blue heron above the fireplace and the owners’ cat inspired the living room’s soft palette. Paint colors of royal and white were replaced with Sherwin Williams’ Worldly Gray, Egret White and Rain (ceiling). “We wanted a very understated Louisiana vibe without the fleur-de-lys and LSU colors,” says Griffing. 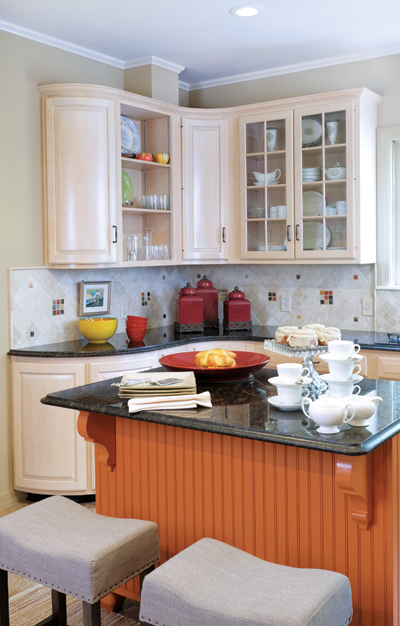 Instead of gutting the kitchen, Griffing worked to enhance what was already there. He updated the island with a terra cotta color pulled from the existing backsplash and painted the custom cabinetry. 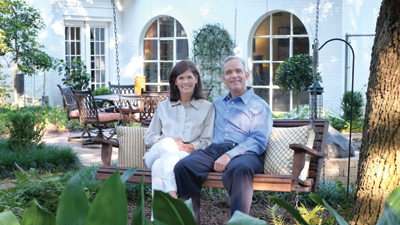 Lisa and Gary Love seated beneath a live oak in the garden of their Pierremont area home.