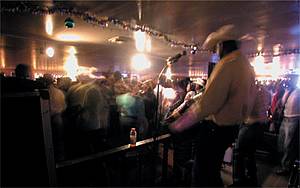 As the old clubs close, Louisiana’s traditional music looks for a new home
About 1,000 people, black and white, turned out in Lafayette on Sunday, June 19, to pay their final respects at the passing of a cultural legend.
No, it wasn’t a funeral – exactly. It was the closing of Hamilton’s Place, one of a dwindling number of small zydeco clubs where the likes of Clifton Chenier, Rockin’ Dopsie and Beau Jocque, long before they became famous, had once enthralled swaying dancers like Indian snake charmers.
For almost half a century, zydeco-loving blacks and an increasing amount of whites in Acadiana had packed into the unassuming, windowless, white frame structure on Verot School Road to gyrate – and perspire – on its pine dance floor.
But Lafayette zydeco clubs such as Hamilton’s Place and El Sid-O’s have seen the crowds evaporate in recent years, the result of competition from free festivals, of stricter DWI laws, of higher band fees and of changing tastes.
“People can’t drink no more and drive,” reflected William Hamilton, age 76, whose father opened the club in 1956 when Verot School Road was still a gravel country lane. “They catch somebody for DWI coming out of here, then I’m liable. I can’t tell when someone has too much to drink. I gave up my liquor license last January. I didn’t lose it, I gave it up. All we was selling was water and soft drinks. I couldn’t make no money on that. The bands charged the cover, not me. I just said, well, I’ve had enough. I don’t want no more.”
Hamilton also noted that his patrons, both black and white, were mostly older people now.
“The younger crowd don’t like the zydeco,” he lamented. “They like those other bands.”
That wasn’t evident at the June wake for Hamilton’s Place, when an overflow, come-and-go, salt-and-pepper crowd of all ages paid $10 each to hear back-to-back gigs by zydeco’s two hottest names, Geno Delafose and Keith Frank. The three five-ton air conditioners were no match for the body heat radiating from hundreds of perspiring dancers, who took oxygen breaks to mill about outside in the soft June evening and to mourn what they were losing. Many of them paid their respects to Hamilton, topped as always by his trademark Panama hat.
“It’s the end of an era,” mused Leslie Bary, a Spanish professor at the University of Louisiana-Lafayette. “I’ve been coming here since 1991. When I was living in New Orleans, I was dating a Cajun who was really into zydeco. Then, when I moved to Lafayette in ’98, I realized I’d been here before. It’s really an old-time place. It was the first time I’d heard black Americans speaking French. It’s one of the most indigenous places I’ve ever seen. It’s perhaps the most amazing cultural experience I’ve had in the United States.”
Her boyfriend, Hungarian-born Istvan Berkeley, who teaches philosophy at ULL, agreed.
“When I first arrived in Lafayette in 1996, this is the first place I came for live music, and I’ve loved it ever since,” he said. “This is the place I always brought out-of-town visitors.”
Also in the crowd were some of the rising zydeco musicians who got their starts here, such as Curley Taylor, whose band, Zydeco Trouble, played here for 15 months.
“It’s been great for zydeco,” Taylor said of the club. “My first gig was here with Geno 10 years ago. It’s a great dance floor. I had real good luck here. This is a real clean-cut club. Everyone just felt comfortable. It’s just so diverse. You had a whole lot of black people and a whole lot of white people together. A lot of clubs are just white people or black people.”
“I came here tonight to celebrate, but we shouldn’t be celebrating,” observed Terry Domingue of Duson, who leads the Zydeco Bad Boys. “This is the place we got started. He [Hamilton] gave us a chance when others didn’t.
“This is one of the hottest zydeco spots in the Southwest,” Domingue added, in the present tense, as though unable to accept the club’s demise. “It’s a place where different cultures can get together – blacks, whites, Asians – just get together for a good time, like a backyard barbecue. I wish somebody would buy it. It’s got a lot of memories.” 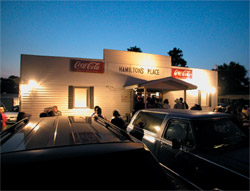 Two months after that nostalgic night, Hamilton came in from a blazing midday sun after completing some manual labor on the 108-acre farm that he and his siblings inherited from their father to discuss the future of the historic 4,000-square-foot shotgun building that sits between his and his sister’s houses. He confirmed he has had three nibbles. One came from Vermilionville, the Acadian heritage park in Lafayette, and another from Downtown Alive!, Lafayette’s free open-air summer concert series. Another came from a Floridian who wants to move it to the suburb of Scott.
Still, none has agreed to Hamilton’s $175,000 asking price.
“As long as they don’t make up their minds to what I want, it’s gonna sit there,” he vowed resolutely. “Everything goes with it – the [memorabilia] pictures, the sign, three air conditioners.”
Hamilton admitted he hated seeing the club close, and that none of his own five children, who have scattered, showed any interest in continuing the family tradition. However, after he had open-heart surgery five years ago, “My doctor told me if I wanted to live a little longer, I had to quit.”
He gave up drinking, and although Hamilton is a non-smoker, his doctor said the passive smoke in the club was dangerous.
Like his grieving patrons, Hamilton possesses a wealth of memories. He explained that his father, Adam Hamilton, bought the then-rural acreage in 1938 for a pittance when William was 9 years old.
In the club’s early days, he said, Clifton Chenier played there once a month.
“We used to sell beer for 20 cents, and everyone came in free,” he recalled. “Clifton had us charge an extra 5 cents for the beer, and he got that extra nickel. He was glad to get that $20 or $30.”
William Hamilton was working for KLFY-TV/Channel 10 in Lafayette in the early 1960s when someone asked him if he knew Chenier.
“I said sure, he plays at my daddy’s club,” he said. “They asked me if I could get him to come on ‘Passe Partout,’” a morning program that is still on the air. “He was the first black accordion player to appear on ‘Passe Partout.’
“My father let me run it [the club] 40 years ago.” he continued. “He died in 1980. In 1982, I expanded the club. Right after that, I had ‘White Night’ for two years. When oil busted, everything went down. ‘White Night’ went down. It never came back. But whites still came. Sometimes it was half and half, especially when Geno Delafose played. We also had white bands. The Michot Brothers [a Cajun group] played every Friday night. A lot of lawyers came, and the retired people had a club and they would come. Dud Lestrapes was the mayor at that time, and he would come a lot. A lot of policemen came.”
In the last few years, however, he said the club was losing money and sometimes held dances just once a month.
“A lot of people are going to the casino and playing bingo,” Hamilton said. He began having the bands charge their own covers, usually $7 or $8 because “I couldn’t take a chance” on losing money.