Louisiana: A united state — A Commentary 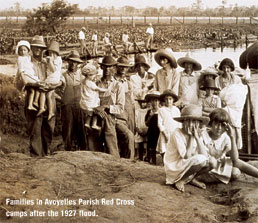 Remember always the week that began on Sunday, Aug. 28, 2005, for on that date, as southeast Louisiana emptied to the threat of a tempest in the gulf, Louisiana began to change, becoming poorer and sadder, yet showing its worth at being heroic and charitable.
History in contemporary Louisiana would now be marked from a new date – Monday, Aug. 29. That morning residents of central Louisiana awoke to the chilling front-page headline in The Town Talk, Alexandria’s daily newspaper: “THIS IS THE BIG ONE.” Subheads pieced together the tragedy in the making:
“Evacuees Flock to Shelters”
“Gridlock Slows Evacuation”
“Experts Expect Storm to Turn New Orleans into Atlantis”
From the tip of Plaquemines Parish, protruding into the erupting Gulf of Mexico, to the relaxed suburbs of upstate Shreveport, practically everyone living in Louisiana that day would have stories to tell, many as victims, some as observers who would see their towns suddenly clogged with hastily equipped new arrivals. The state would stagger just trying to stay in the ring with what would be dubbed as the worst natural disaster in American history. Tropical winds typically knock down trees and propel shingles off roofs, but seldom have they turned the world upside down – not until the waning days of August 2005.
Five years from now – even a decade beyond – well into the fledgling century, the stories will continue; so will the studies trying to explain what happened to Louisiana in its summer of tragedy.
We do know this: by Labor Day 2005, Louisianians, many for the first time, were beginning to discover their state and each other. And now workers from throughout the state will follow the path to New Orleans, already worn by National Guard troops, as part of the rebuilding and, we hope, as witness to the rebirth.
Politically and socially, New Orleans has often been complained about, teased and maligned by the rest of the state – the sinful big city that spends too much and lives too exotically. But as the city laid near death, the rest of the state, and indeed the world, was reminded about the good times it had with the lady and of her creativity and elegance.
New Orleans’ character was shaped partially by its surroundings, including St. Bernard Parish – a sibling overshadowed by the city in life and tragedy, yet distinguished for its sea life and fresh oysters. As lovely as the shoreline could be at places such as Delacroix Island, St. Bernard’s waters displayed a feral nature, reverting to their instincts and claiming their place, even above the land.
Louisiana is a state shaped by water, with a gulf to its south, rivers at most of its boundaries, and swamplands and bayous throughout. Flood waters from the Mississippi River created the rich alluvial soil that has made cotton grow so bountifully.
Water had overtaken Louisiana land many times, but with each conquest, technology and the U.S. Army Corps of Engineers have used dams and locks to straitjacket the offending stream. Some places that once flooded are now floodproof, but many of those truncated waterways are no longer important. In New Orleans, Lake Pontchartrain remains important; so, too, does its threat.
Now water has brought Louisianians together as never before, though togetherness is not always a happy outcome. Many people will feel displaced, as though they do not belong. There will be troubling social issues. But there will also be new friendships, alliances, romances and even lives created by Katrina.
There will also be millions of tales to be told, including one by someone who is too shy to tell hers. As a child, Renal Bordelon was a victim of the Great Flood of 1927. A break in the levee at Bordelonville caused Bayou Des Glaises, then connected with the Atchafalaya River, to spill over. For a month or so, she and her family slept in tents at a Red Cross camp in the Avoyelles Parish town of Mansura. Later known by her married name, Rena Laborde, my mother spent most of her adult life in New Orleans, where in recent years she lived in a brick home along the now infamous 17th Street Canal. At different ends of her life she has been a victim of roof-high water. The sisters whom she has evacuated to each live within four miles of the refugee camp site of her youth.
Her life spanned the era from pre-rural electricity to wireless laptop Internet; from Model-T Fords to space shuttles; from Huey Long to Kathleen Blanco, yet high waters remained a threat throughout and twice took all that she had – only this time including the memorabilia of a lifetime. She remains, though, a Louisiana woman, still talking to relatives in French and shaped by the culture and traditions of the state.
Now, as the state begins a new era, many Louisianians of all types will get to know their state better. As they do so, may all Katrina’s victims experience, from here on, a life of love, comfort and calm waters.