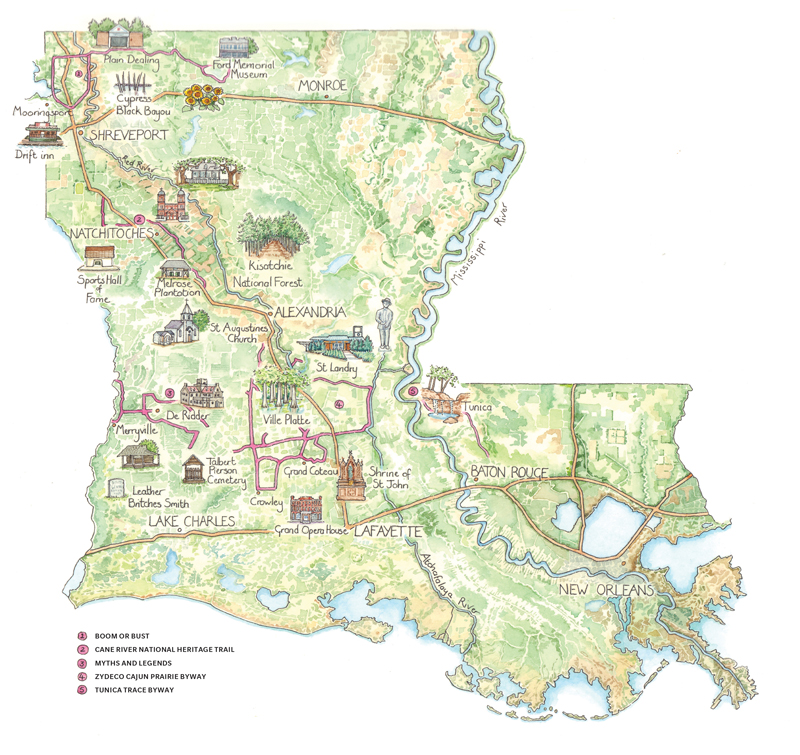 Industry moved in and out of the northwest corner of Louisiana over the past two centuries. Oil and gas, timber, farming and more brought prosperity at its inception and ache in its wake. The four-parish, 136-mile Boom or Bust Byway showcases some of the towns involved in these revolving economies, plus long stretches of rural countryside perfect for a peaceful ride in the country.

One of the trail’s highlights is the annual Sunflower Trail and Festival, June 19 in Gilliam, with blooms along Highway 3049 between Gilliam and Shreveport. The event in town offers arts and crafts, food vendors, music and more but road trippers may just want to drive the 20 miles of highway from mid-June to early July to enjoy the fields of blooming sunflowers.

Cool off at two hot spots — Cypress Black Bayou with its man-made beach on Cypress Bayou Reservoir, along with cabins, fishing and a zoo, and Black Bayou Lake with its boat ramps and picturesque fishing pier.

“Cypress Black Bayou is a really cool place to drop in and hang out,” said Shalisa Roland who covers the trail for the Shreveport-Bossier Convention and Tourist Bureau. “And Black Bayou Lake is a local favorite. A lot of people don’t know it’s there.”

Foodies will not want to miss Longwood General Store in Mooringsport serving up steaks, hamburgers and Southern classics in a small dining room and country store within a gas station. Big Dup’s Cajun Kitchen in Plain Dealing also serves great meals such as boudin, hot water cornbread and the “Voodoo Burger” out of a convenient store.

The Drift Inn in Mooringsport is another local favorite, and offers a pier for fishing. “It’s another little place that’s tucked away,” Roland said. 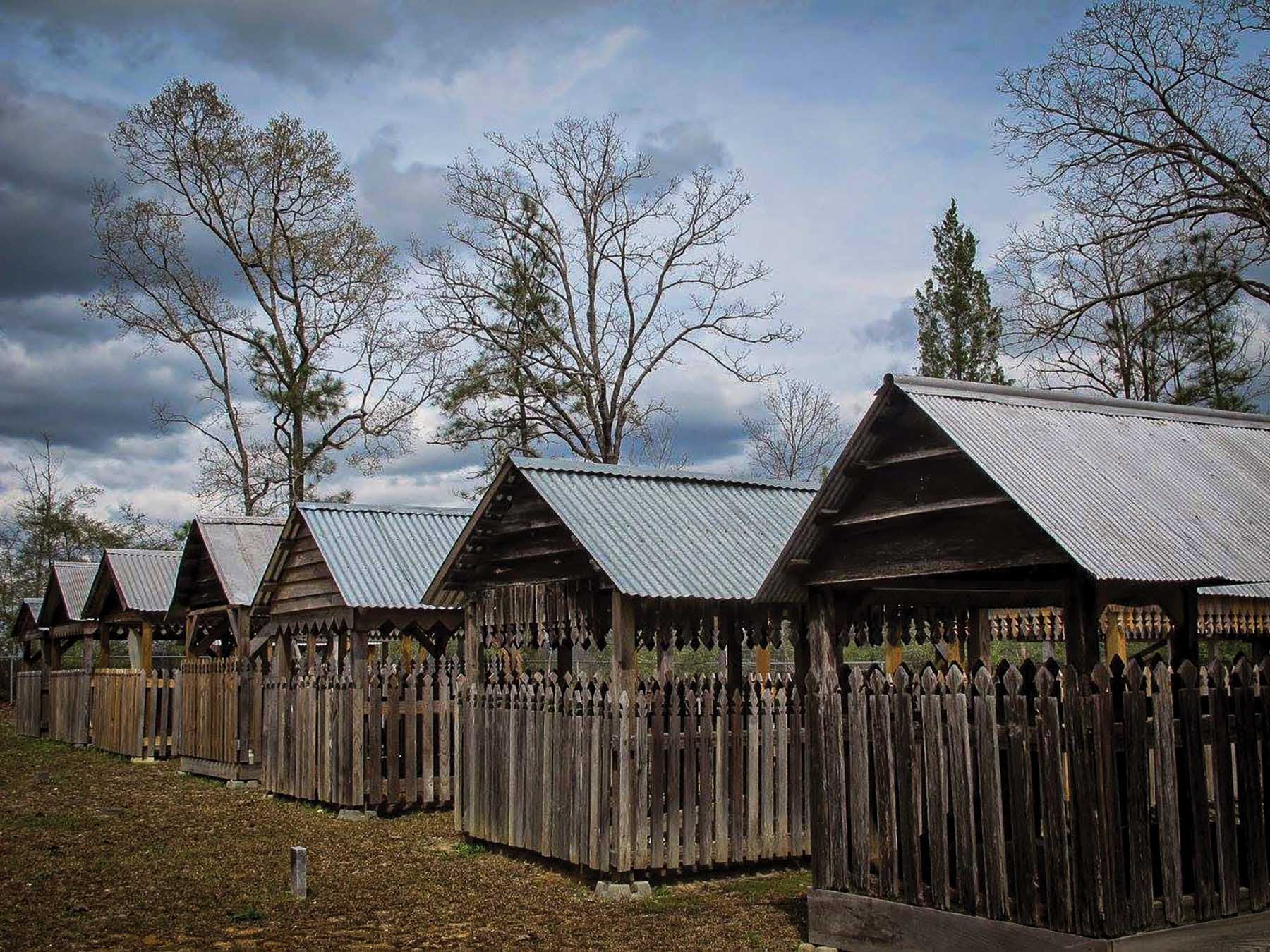 Think odd and unusual when you travel down the Myths and Legends Byway, with a few outlaws thrown in the mix.

In Vernon, stop and admire the unique “houses” adorning the circa-1860 Talbert-Pierson Cemetery graves. Pioneers of the two families crafted pickets from local woods to build these shelters, then topped them off with metal roofs. Was it to keep the weather off their dearly departed or a special spiritual practice? You be the judge.

Lois Lofton of DeRidder loved collecting dolls and she amassed more than 3,000 from around the world. When she died, she bequeathed her collection to the city of DeRidder and visitors can now view this fascinating assemblage weekdays at the Beauregard Tourist Commission office. While you’re there, arrange to visit the DeRidder Gothic Jail next door, an architectural wonder as well as a favorite among ghost hunters. Two men found guilty of murder were hung in the building and many claim their spirits remain.

The Byway includes Sugartown, the first permanent settlement in southwestern Louisiana, and Elizabeth, where the town’s city hall is housed in a hospital built in 1924 for the Industrial Lumber Company. Merryville contains the grave of Leather Britches Smith, a notorious outlaw.

Nature lovers will want to explore the Kisatchie National Forest that stretches through the region, including Wolf Rock Cave outside Leesville, a rock shelter dating back centuries. 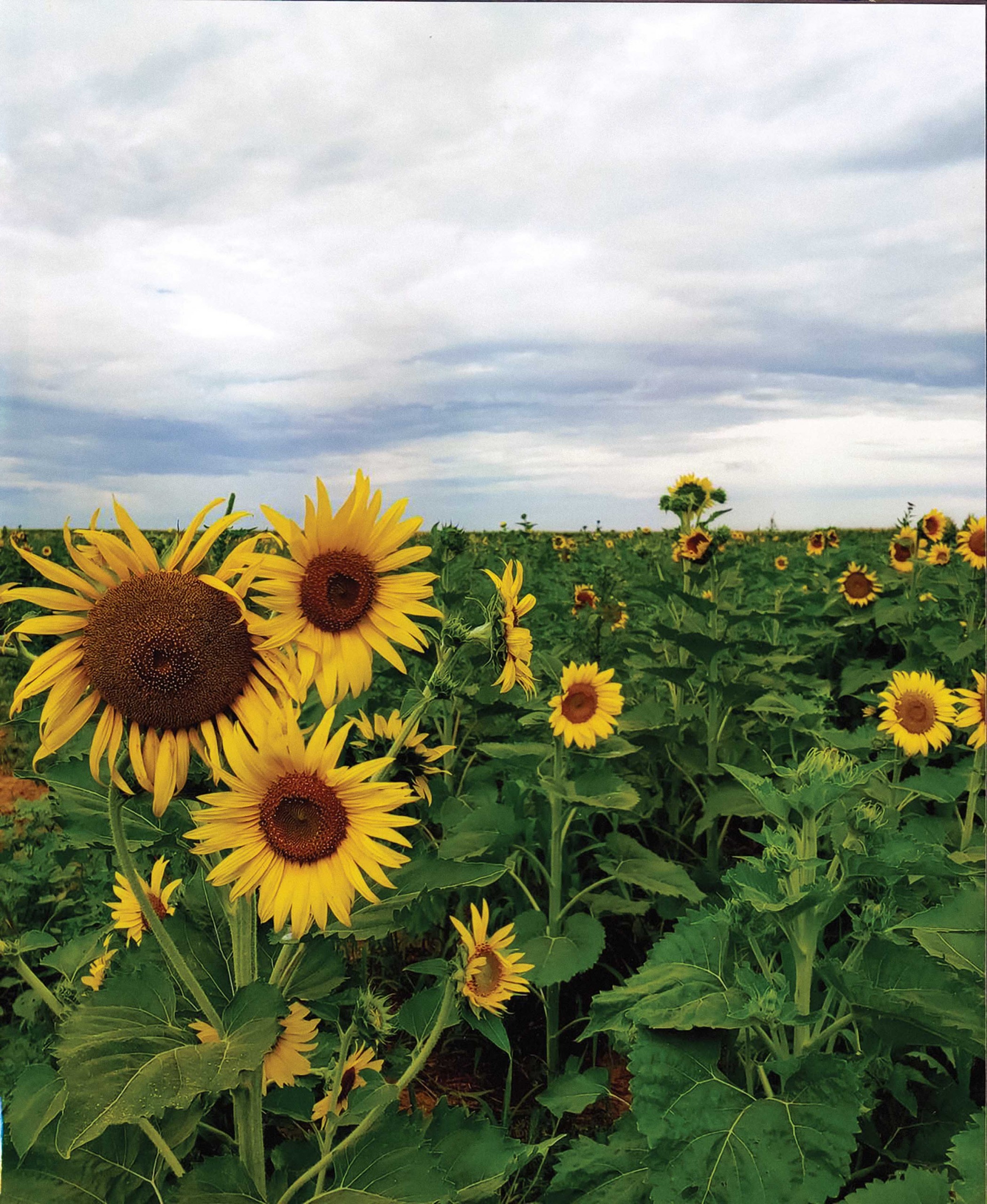 Getting Outdoors
Louisiana offers many trails that offer hiking, biking and other outdoors activities.

The Tunica Trace
The Tunica Trace with its rolling hills stretches from the quaint town of St. Francisville, with its historic homes and plantations, to Angola, home to Louisiana State Penitentiary. In between lies the 6,000 acres of the Tunica Hills Wildlife Management Area, great for hiking, horseback riding and camping, among other activities.

Longleaf Trail Byway
Another great region to find Louisiana’s rare hills and ravines is the Kisatchie National Forest in the center of the state where the Longleaf Trail Byway offers elevations ranging from 80 feet to 400 feet above sea level. A favorite of hikers and birders is Longleaf Vista, with its dramatic views along the 1.5-mile interpretive loop. There are places to picnic and hikes that lead down to a peaceful creek. Depending on the time of year, visitors may spot wildlife such as deer, wild turkeys and colorful migratory birds. 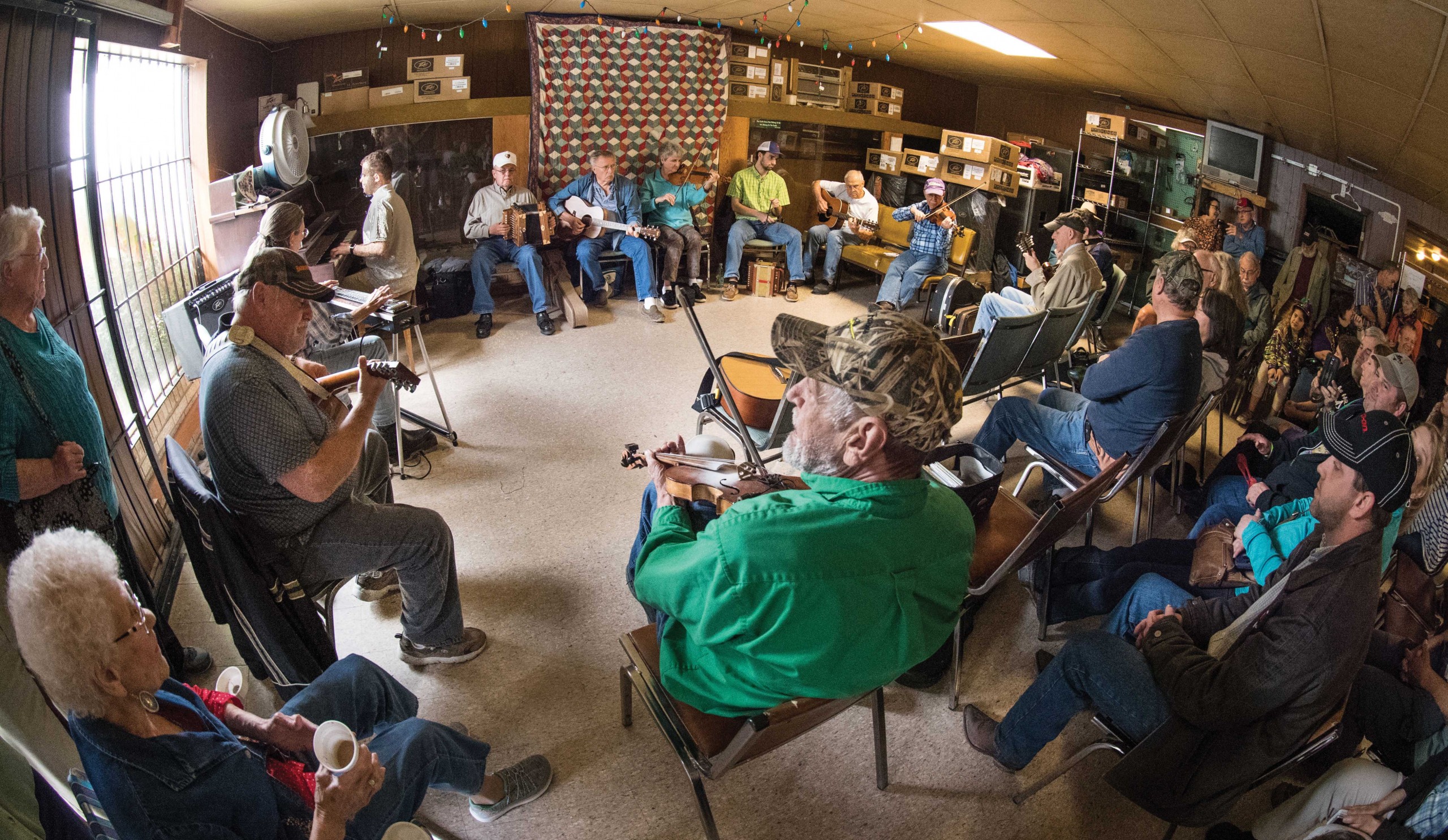 The prairies of southwest Louisiana lay claim to the origins of zydeco, swamp pop and Cajun music styles. Start your tour at the St. Landry Parish Visitor Center, with its sustainable building and landscaping and the Amédé Ardoin Commemorative, a statue dedicated to the Louisiana musician who performed Creole music that later developed into zydeco and helped shape Cajun music.

Up the road visitors will learn about swamp pop history at Ville Platte’s Swamp Pop Museum.

“This railroad depot-turned-museum highlights a time when local singers made the Billboard Hot 100 with a musical gumbo of Fats Domino, Hank Williams, Elvis and Cajun and Creole music,” explained Herman Fuselier, executive director of the St. Landry Parish Tourist Commission.

To view music in action, Marc Savoy crafts “Acadian” accordions that fuel dozens of Cajun and zydeco bands at the Savoy Music Center in Eunice. Savoy hosts a Saturday morning jam session that draws a global audience, Fuselier said. In Crowley, the historic Grand Opera House of the South attracts worldwide acts and is home to the International Rice Festival held every October.

Over in historic Grand Coteau, the Shrine of St. John Berchmans marks an American first.

“Located at the Academy of the Sacred Heart, the Shrine is the site of the only Vatican-recognized miracle in the United States,” Fuselier said. “And while you’re there, the school’s museum tells the story of the Academy’s founders and the school’s role in helping former slaves transition to freedom.”

End your visit with a stop at DezMeaux’s in Opelousas for fried chicken wings stuffed with boudin. 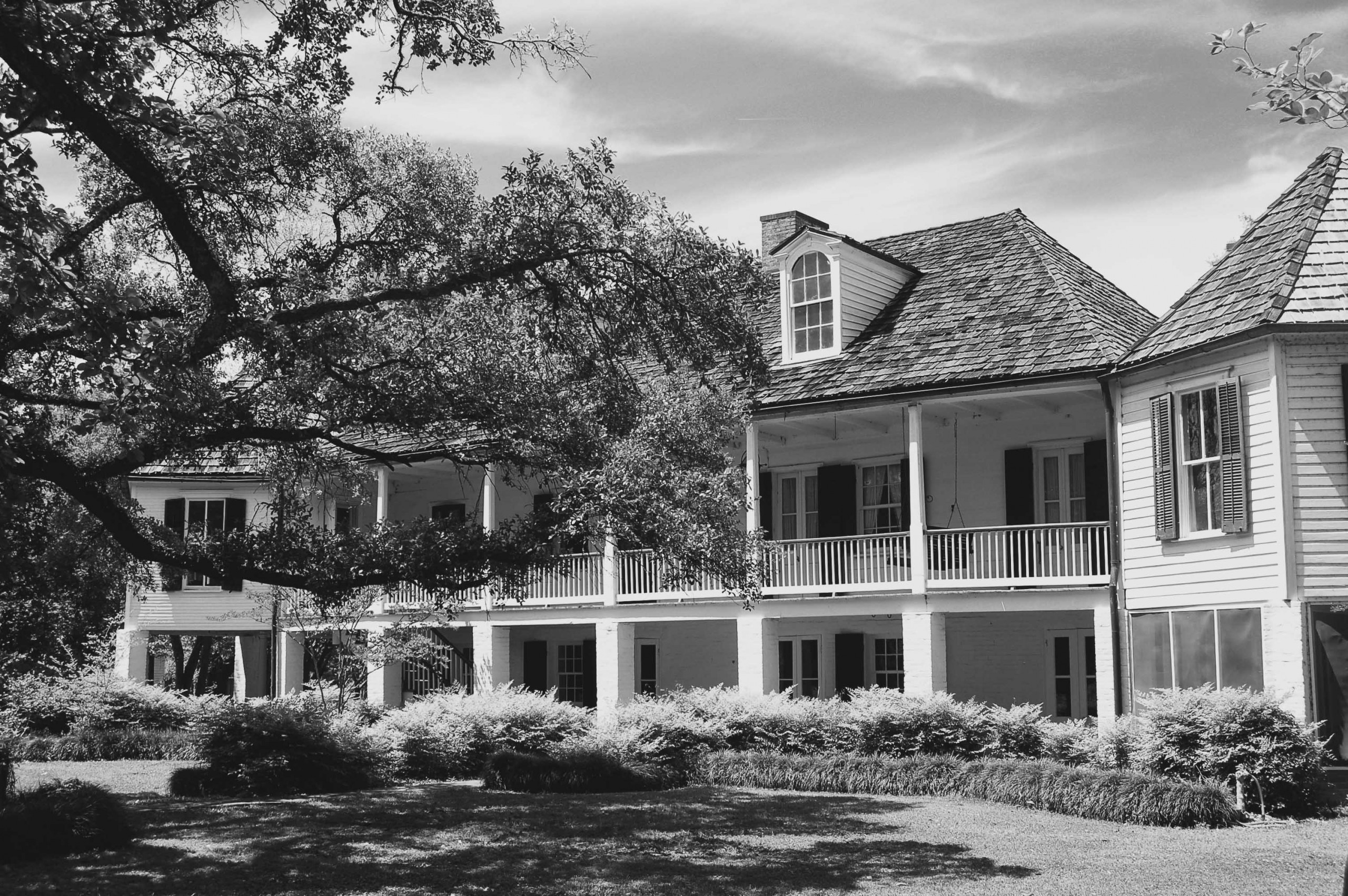 The 71 miles that make up the Cane River National Heritage Trail consist of numerous attractions, places to relax for a meal and the town of Natchitoches, one of the most charming cities — and oldest — in Louisiana.

Start from the south and work your way up Cane River, pausing to enjoy Melrose Plantation, built by free people of color and once home to arts patron Cammie G. Henry and renown folk artist Clementine Hunter.

Within the Cane River Creole National Historical Park are Oakland Plantation and its many historic buildings, including the plantation store, 27 outbuildings and historical agricultural equipment. Nearby is St. Augustine Catholic Church, founded in 1803 as the first Roman Catholic Church created for people of color.

There are so many other historic spots to see along Highway 1 and, for a brief stretch, Highway 484, so be sure to grab a trail map at the national park.

Natchitoches concludes the trail up the river, the oldest permanent settlement in Louisiana, and its 33-block historic district offers boutique shops, restaurants, restored historic homes, churches and buildings, and the Louisiana Sports Hall of Fame. The trail then extends westward to include Fort Jesup State Historic Site, where a young Zachary Taylor served, and Los Adaes State Historic Site, once the Spanish capital of Texas. The Adai Indian Nation Cultural Center exhibits its Native American history and hosts an annual pow-wow

For more information about Louisiana’s Trails and Byways, visit byways.louisianatravel.com. We suggest calling individual attractions in case of COVID restrictions

Gas Station Eats in No Man’s Land
Traveling the back roads of Louisiana can build up an appetite, but there’s plenty of good eating along the way, even at the most unexpected places.

When America purchased Louisiana from France in 1803, Spain’s territory lay to the west in what we now call Texas. The border between west Louisiana and Spain was in dispute for many years, resulting in a “Neutral Ground” without law and order. This “No Man’s Land” existed until 1819 when a treaty was signed but, because of its unique history and its luring of both hardy pioneers and outlaws, the region produces a melting pot of food cultures, said Rebecca Blankenbaker, executive director of the Cane River National Heritage Area and chair of the No Man’s Land committee.

Categories: Around The State, History