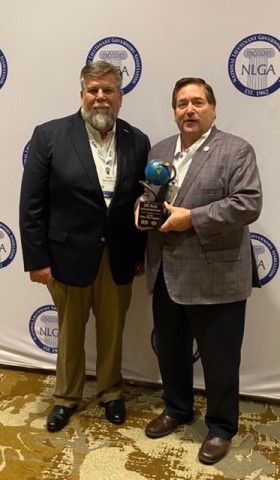 POINT CLEAR, Al (press release) – Lieutenant Governor Billy Nungesser today received the 2021 Recycling Impact Award during the National Lieutenant Governors Association (NLGA) meeting in Point Clear, Alabama. Presented by the Institute of Scrap Recycling Industries (ISRI) in partnership with the NLGA, the award recognizes leaders working within a community, region, or state to positively impact resource conservation and recycling. Lt. Governor Nungesser, a former chair of the NLGA, is the second recipient of this award.

“Recycling and environmental conservation efforts are key to the health and vitality of Louisiana communities,” said Lieutenant Governor Billy Nungesser. “The recycling industry creates jobs for Louisianans, with an economic impact of $1.3 billion in our state, and I’m proud to support efforts that make Louisiana a destination to live, work and visit.”

“This award recognizes established and up-and-coming leaders committed to effectively tackling the current and future challenges of our nation,” said NLGA Executive Director Julia Hurst. “By recognizing Lt. Governor Nungesser, attention is brought to his accomplishments in Louisiana in a way that can bring new ideas to other states.”

Lt. Governor Nungesser’s accomplishments in recycling include a grassroots campaign in 2019 to recycle political signs following elections and numerous Public Service Announcements supporting recycling in Louisiana, including Mardi Gras beads and general litter abatement. Lt. Governor Nungesser also participates in the annual Keep Louisiana Beautiful conference, where he will serve as the keynote speaker this year during the Everyday Hero Luncheon on Thursday, October 14, in Baton Rouge.

ISRI Gulf Coast Chapter Second Vice President, Alton Schaubhut of CMC Recycling said, “Lt. Governor Nungesser is both a champion of the environment and business. Hailing from a coastal parish in a state that has experienced its share of environmental and natural disasters, Billy has an innate ability to strike balance between what is best for nature and putting the environment of the state of Louisiana first, while also supporting local businesses and providing jobs that directly impact the local economy for the better. We salute Lt. Governor Nungesser and thank him for all he’s done and will continue to do for the betterment of the recycling industry in the state of Louisiana.”

ISRI President Robin Wiener added, “Lt. Governor Nungesser is a true advocate for businesses that directly benefit the communities they operate in. He is a champion for the state of Louisiana’s recycling, conservation, and beautification efforts. ISRI members in Louisiana know that if they need something, Mr. Nungesser is there. We congratulate Louisiana Lt. Governor Nungesser on being named the recipient of the 2021 NLGA Recycling Impact Award.”