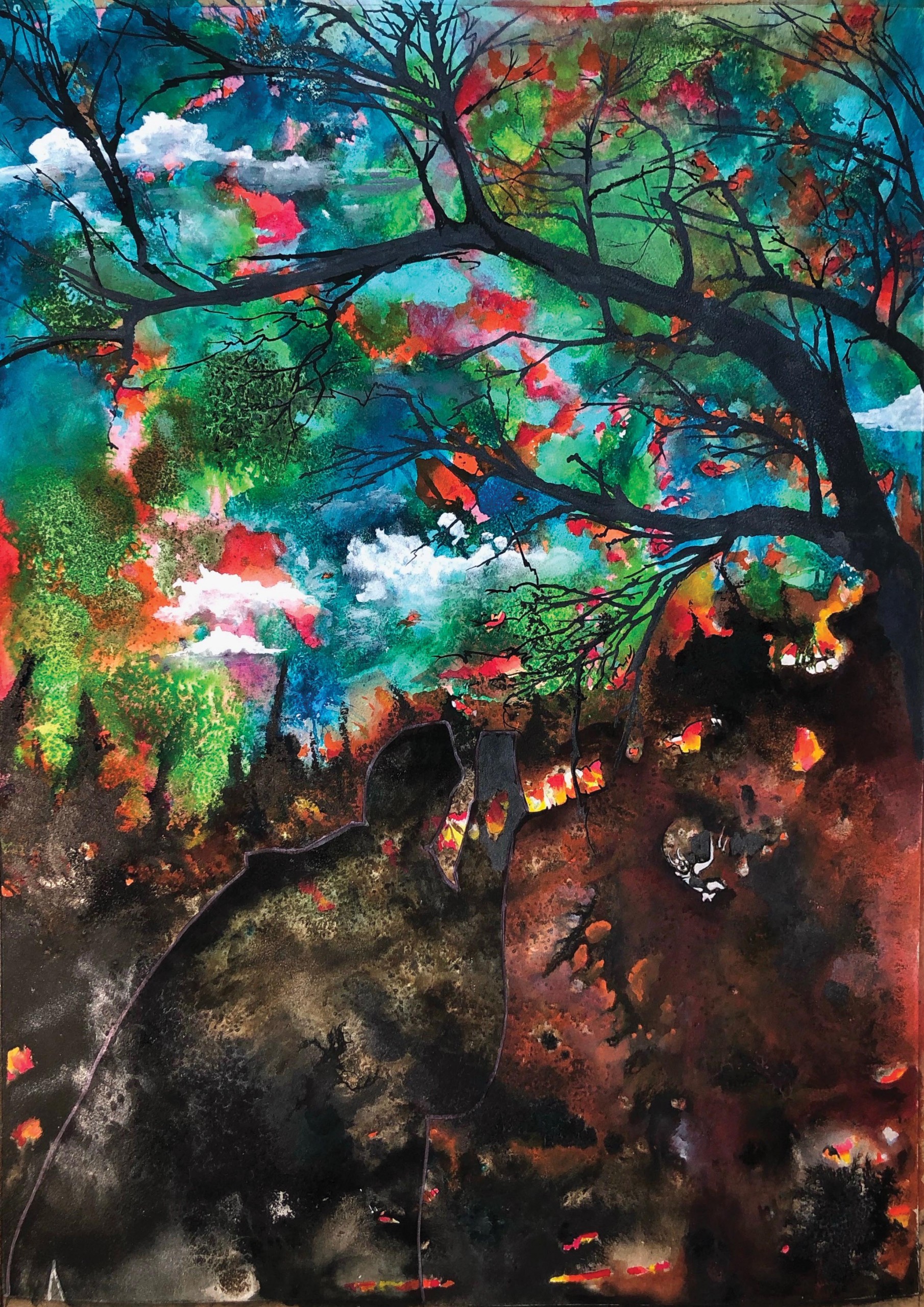 A visit to Paulo Dufour’s studio on Narrow Road in a wooded countryside north of Covington in St. Tammany Parish is like a walk through Tennessee Williams’ “Glass Menagerie,” a dreamlike place filled “with pieces of colored glass … like bits of a shattered rainbow.”

These are not shards of shattered rainbows however, but elegantly sculptured layers of blown glass with stories to tell, stories about the artist himself. He describes his artwork as “amorphous and sensuous” and as an “allegorical metaphor” that “suggests the struggle of the human condition, where real conflict and myth evolve.”

Dufour, son of the acclaimed artist and LSU professor Paul Dufour, is introspective when talking about his work. It is an intellectual and spiritual exercise that has taken him through the teachings of Buddhism and the writings of Carl Jung, the founder of analytical psychology. With that mindset, he describes his life in two parts. The first half was devoted to building a career, marriage and raising a family. The second half is now spent in a spiritual examination of his life and his art through daily “meditation and contemplation.”

“When I say spiritual,” he says, “what I mean is your relationship between you and the world. When I retired from teaching [for] almost 30 years in the St. Tammany public school 30 and at LSU and a few other places, I wanted to live a more quiet and contemplative life. To me, contemplation is through my art.”

In recent years, Dufour has concentrated on two themes that have taken him deep within himself. In his “Mental Universe” series of sculpted blown glass, Dufour has created elegantly shaped works with attached featureless human forms. They are metaphors for his brother who suffered a stroke and catastrophic aneurysm and sister who died from a stroke. They also are expressions about form and color.

“In glass blowing you never know how it’s going to turn out,” he says. “But that’s OK because I want my work to be free-flowing and organic like forms and shapes in nature. In ‘Mental Universe’ I wanted the transparencies to be a kind of fluid-like dynamic so that it resembles blood flowing through the brain. I began to see synapses-like mental activity within the brain. All of these sculptured figures have an injured figure and the bleeding that happens.”

The second series, “Shadow Work,” consists of dark paintings influenced by the writings of Carl Jung and Dufour’s sense of loneliness combined with his love of trees and the natural landscape. The title is based on Jung’s philosophy of “the shadow” in the human psyche and subconscious.

“Like the song ‘Me and My Shadow’,” he says, “my shadow was my companion. Exploring ‘the shadow’ is a four-step process in which you bring up images and memories and specifically dreams and bring them out into the open. I then create some type of artwork from exposing this idea and seeing what happens without a lot of planning. Sometimes imagery would come into the painting and I would see it and explore those images as they emerged. I was fully immersed in there.”

In these paintings, Dufour includes shadowy human figures, landscapes and trees, which he says were an important sanctuary for him as a child. He again refers to Jung.

Dufour says, “Jung said trees are marvelous because they dig down deep into the earth and express themselves above. I think that’s a deeper dive down into consciousness and then it’s going to come out in some form. In ‘Shadow Works,’ the shadows are projected on to a darker inner world and then the landscape is up above with trees and silhouettes. It’s an ongoing series of self-exploration.”

The 66-year-old Dufour’s long journey of self-exploration has taken him down many paths since childhood when he found solace alone in the woods and collected small empty bottles that he filled with colored water. Born in Portsmouth, New Hampshire, his family moved to Baton Rouge in 1959 when his father joined LSU’s art faculty. After earning a Bachelor of Fine Arts degree from LSU and a Bachelor of Fine Arts degree from the California College of Arts and Crafts, Dufour moved to Fort Smith, Arkansas, in 1981 to take a job designing glass lampshades and lamps at the Merry Go Round Glass Company.

Two years later, the company transferred him to Covington, to consolidate the company’s three studios in that region. That same year he decided to quit the corporate world and open his own studio in Covington, featuring his glass art, paintings and original stained-glass creations and restorations.

Dufour also decided to fulfill his long-time desire to teach. For about a year, he commuted to Baton Rouge to teach art at LSU and Southeastern Louisiana University in Hammond and in 1989 he joined the St. Tammany school system, where he taught art for the next 27 years.

Over the years, Dufour has had considerable success with his art. In addition to shows across the nation, his work can be found in major museum collections in Spain and the United States, including the prestigious Corning Museum of Glass in New York.

Commercial success and sharing his work with others are important, but, as Dufour says, it has to have meaning, “If my work isn’t spiritual and magic, they’re just materials.”