Briny, sweet and packed with vitamins and minerals, Gulf oysters are a beloved Louisiana food. Whether they are broiled, chargrilled, stewed or fried, belly up to the bivalve for a heaping helping.

Broiled oysters: There are two ways to execute this dish. The oysters can be broiled on the half shell, but that necessitates opening oysters, which is not part of everyone’s skill set. Alternately, you can buy shucked oysters and broil them in small ramekins, which greatly simplifies the process.

To open oysters, you need an oyster knife. There are dozens of different designs to choose from — a Boston knife, a Chesapeake knife, a Galveston knife and so on. I have four versions, and my favorite is the New Haven style, which has a slightly bent point that affords increased leverage.

Oysters are as much a part of Louisiana life and lore as gumbo or Mardi Gras. The raw oysters, fried oysters and oyster poor boys we take for granted as regular features of our diet are a source of wonderment for outsiders, particularly those from the inland states where fresh oysters are usually not available. Many a visitor has eaten his or her first oyster on a trip to Louisiana. It’s likely that even if you know little or nothing about New Orleans cuisine, you’ve heard of Oysters Rockefeller and that the dish was created at Antoine’s.

Louisiana is celebrated for its variety of oyster dishes, which no other section of the country can match. Part of the reason for our large oyster repertoire is undoubtedly the great bounty from the Gulf. Louisiana harvests more oysters than any other state, currently 34 percent of the national total. In addition to those served on the half-shell or fried, oysters are enjoyed in gumbos, stews, soups, baked, broiled, in oyster stuffing for turkey and in myriad other ways, limited only by the cook’s imagination.

The shallots called for in the recipe are the small brown-skinned bulbs, not green onions, which are frequently called shallots in Louisiana. Provide plenty of French bread for soaking up the juices. 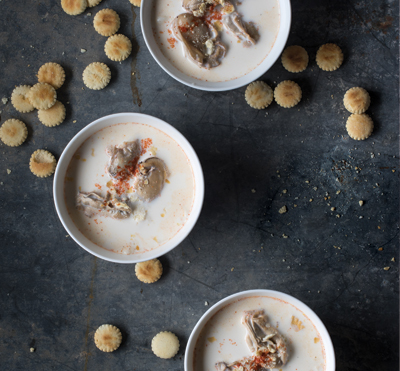 In a mixing bowl, combine butter, shallots, parsley, salt, cayenne, black pepper, lemon juice and ¼ cup of the Parmesan. Whisk or mix ingredients until well combined. In a small bowl combine ¼ cup Parmesan with the breadcrumbs. (This can be done ahead of time and refrigerated until needed.)

Off-bottom oyster cultivation is a method of raising oysters in floating cages or baskets that protect them from predators. It also produces oysters that do not spawn and that maintain their flavor in summer months. Several producers have adopted this labor-intensive method in the waters off Grand Isle.

If there is an easier recipe for a satisfying dish, I don’t know what it is. I used to enjoy sitting at the bar in New York’s Grand Central Oyster Bar and watching the chefs make oyster-stew-to-order in their small steam-jacketed kettles. All you need to make it yourself is a stove and a pot.

In a pot, heat milk, cream and oysters almost to the boiling point. Season to taste with salt and pepper. Divide oysters and broth among the 4 hot bowls. Top with a dash of cayenne and a dash of paprika.

This dish is not seen much these days, but at least one of Louisiana’s earliest cookbooks contains a recipe for oyster beignets. These make delicious little appetizers.
oil for frying
1     cup flour 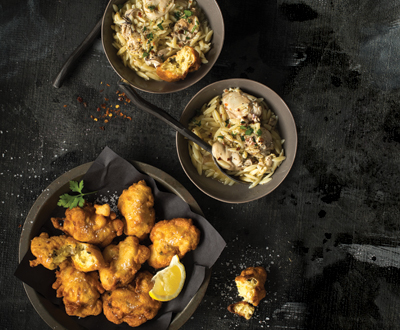 In a pot, pour about two inches of oil and heat on the stovetop.
In a bowl, whisk dry ingredients to combine. Add milk, egg yolk and lemon zest; stir to combine. Chop enough oysters to yield ½ cup; place in strainer to drain. Add drained oysters to batter and stir to combine. Whip egg white until stiff, then fold into batter.

When oil reaches 375 F on a deep-fry thermometer, drop batter by the spoonful into oil. When beignet is brown on one side, flip to brown the other side. Remove cooked beignets with slotted spoon and drain on absorbent paper.

Increasingly, Louisiana oysters will be marketed by place or proprietary names, as are East and West Coast oysters. That was once the case, and it is now being revived as off-bottom cultivation results in distinctive flavor profiles. Caminada Bay, Champagne Bay and Triple N are three current examples.

Cook orzo al dente according to package instructions. Meanwhile, in a large skillet, cook garlic in olive oil until softened. Add wine and crushed red pepper. Add butter and oysters and cook briefly to firm oysters. Drain orzo, reserving some of the cooking water. Add orzo to skillet and stir. Add a little of the cooking water and season to taste with salt and pepper. Divide the orzo and oysters among 4 shallow bowls and sprinkle with chopped parsley.

The New Orleans Oyster Festival is at Woldenberg Park in New Orleans, June 3 and 4. It features oyster preparations (including an Oyster Rockefeller Po-Boy) from some of the city’s finest restaurants, as well as a shucking contest, cooking demonstrations and an oyster eating contest.

This is an exceedingly quick soup to make. Assuming you don’t have to shuck the oysters, you can have dinner on the table in under 10 minutes. Round out the meal with salad, a good loaf of bread, wine and fruit.
¼     cup extra virgin olive oil
4     cloves garlic, minced
1     cup diced fennel
4     cups chicken stock or broth 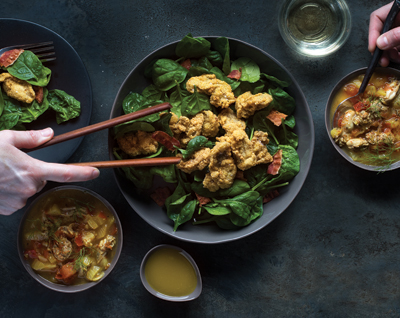 In a medium-sized pot, simmer garlic and fennel in olive oil for a minute or two until fragrant. Add chicken stock, wine, anise liqueur, ground dried shrimp, saffron and tomato. Boil for a few minutes, then add oysters and simmer only until oysters begin to curl. Season to taste with cayenne and black pepper and garnish with fennel fronds.

Oysters are wrapped in bacon and broiled in a dish called Angels on Horseback. Anyone who has tasted that combination knows that it is an inspired pairing. Here, oysters and bacon are included in a spinach salad with a mustard vinaigrette.
4     slices thick bacon
8     cups baby spinach
¼    cup extra virgin olive oil
4     teaspoons Dijon mustard
4     teaspoons white wine
vinegar
coarse salt and freshly
ground black pepper
oil for frying
corn flour for breading
24    oysters

In a pan, fry bacon until crisp, then drain on absorbent paper. Meanwhile, wash and dry spinach, discarding any bruised or wilted leaves. In a bowl, whisk olive oil, mustard and vinegar together until emulsified, then toss with spinach. Season with salt and pepper. Divide salad among four plates. Cut bacon into bite-sized pieces and place atop salads.

In the same pan used for frying, add oil to a depth of about 2 inches and heat until the temperature reaches 375 F on a deep-fry thermometer. Place corn flour in a shallow pan or dish. Dredge oysters in corn flour and fry, in batches, until crisp. Drain cooked oysters on absorbent paper. Sprinkle with salt. Keep oysters warm in a low oven until all are cooked. Divide oysters among the four salads.