As 8 a.m. fast approaches, activity fills the misty Mardi Gras morning on the old stretch of Cajun prairie called Faquetaigue. Horses are saddled and fiddles tuned. Bright costumes are topped with festive hats and masks while a bottle of whiskey (the good stuff, it’s early yet) gets nipped from and passed.

The courir — “run” — is about to start, and the Mardi Gras capitaines explain the rules to all the newbies as they kneel on the open ground in a chilly, muddy hazing ritual.

“When we arrive at the voisins (neighbors’), you don’t enter the lawn until the capitaine raises his flag. Now repeat after me: “donne-mo’ que’q’ chose pour les mardi gras!” (“give me something for the Mardi Gras runners!”). The genuflecting chorus chimes in heartily and is instructed further in the etiquette and nuance of chicken-chasing.

With roots in the same medieval begging rituals that gave the world mummers, wassailers and even trick-or-treating, alongside the Christian tradition of Carnival (a final consumption of meat and display of merriment before the Lenten season), quirky accoutrements of medieval traditions (for example, the traditional hats worn at Cajun Mardi Gras are the pointed capuchon, a mortarboard, and a bishop’s miter; remnants of some Middle Ages cosplay intended to mock princesses, scholars, and the clergy), and a heaping helping of Cajun-style humor and irreverence, the Mardi Gras courir is a tradition both ancient and fully alive.

Accompanied by musicians and a few peacekeepers on horseback (sometimes actual police officers, sometimes simply dad-types on the lookout), troupes of participants, usually called “runners,” “riders” or simply “Mardi Gras,” crop up in planned events throughout the prairies of Southwest Louisiana, primarily within 30 or so miles of Eunice and Mamou. They band together in the morning and follow a planned route that takes them from farm to farm, begging for ingredients for a gumbo and drinking and mischief-making along the way. (Note that gumbo, in this far-from-the-swamp stretch of Cajun Louisiana, is bird-and-sausage concoction, served over rice.)

Some houses will offer a bag of rice or a few links of sausage, but the grand prize is a live chicken or guinea hen. Heaved from the porch or the pitch of the roof, the bird flaps and skitters its way through the sprinting, costumed runners until someone pins it down and tucks it under his arm to carry around as his prize for the rest of the day.

Music is a crucial accompaniment at nearly every courir. Musicians usually ride on a flat-bed bandwagon pulled by a pickup truck, following the runners and offering instrumental accompaniment when they sing the Mardi Gras song, an ancient, modal melody whose origins are lost to time:
“Les Mardi Gras s’en viennent de tout partout, tout le tour autour du moyeu…
Ça passe une fois par an, demander la charité…”
“The Mardi Gras come from all around, from all around the area…
They pass by once per year, asking for charity…”

There’s meaning to the tradition behind the masks and begging, explains Faquetaigue Mardi Gras coordinator and musician Joel Savoy.
“The reason these courirs are all still going is that it’s a chance for the ties of the community to really be strengthened.” Says Savoy. “It’s a community ritual, and one which really appeals to young people, so you see young people taking it up year after year in all these towns around here: Mamou, Eunice, Iota, Scott.”

The constant infusion of new blood, as kids slowly become old enough to participate (and naturally want their turn to take part in the escapades), keeps the tradition both alive and evolving. New runs occasionally pop up and each takes on its own flavor. The Faquetaigue run is only a decade old — a baby, in Mardi Gras terms — and Savoy and friends started it when the nearby Eunice run simply became too big for their tastes.

They decided to bend the old traditions a bit and allow anyone to run — women and children, certainly, but also non-Cajuns and visitors from all over the world. The only trick is that they never publicize the location, so in order to participate, you have to know someone.

“It means that everyone attending is just one or two degrees of separation removed from me and my circle,” says Savoy. Though the run has swollen to nearly a thousand participants, it still retains that intimate feel. If someone gets out of line, Savoy says, “we can usually just ask one or two people and we find their boys and get them taken care of.”

Zack Pozebanchuk, a former North Carolinian, fell in love with South Louisiana via the Faquetaigue run, and he ultimately relocated here.
“I’ve done the city Mardi Gras, riding in parades, and watching parades, and it’s fun,” says Pozebanchuk. “But there’s always a distance between the people in the parade and the people on the ground.”

At the courir, he says, “you feel like you’re more a part of things. You’re right in there.”

Eunice and Mamou have onlookers watching the Mardi Gras run, but Faquetaigue forbids it. If you come, you participate.

Masking is among the oldest elements of Mardi Gras, and one found in Carnival celebrations around the world. As anything goes on Fat Tuesday, masks allow participants to become someone else completely or no one at all. Historically, they were the great equalizer: no one could tell royalty from commoners. On the Faquetaigue prairie, says Pozebanchuk, they’re also an equalizer:
“No one can tell if you’re from here or just here for the run,” he says. “No one knows who you are!”

Of course, by the end of the early spring day on the Cajun prairie, mud tends to be an even greater equalizer, and what’s left of everyone’s costume is caked in it. Worn out from chasing chickens and bien saoul (drunkity drunk), everyone returns to the starting destination for gumbo and a dance. Though traditionally, the ingredients for the gumbo are collected on the run itself, these days, the chickens that are caught get saved for later, as there’s a patient crew of Maw Maws and Paw Paws back at headquarters, ready with hot gumbo and ice chests brimming with libations. Tomorrow, the thoroughly penitent will exchange mud for ashes, but tonight, it’s waltzes and two-steps until darkness falls. 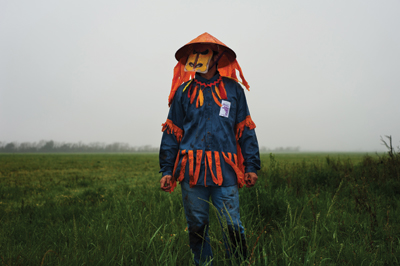 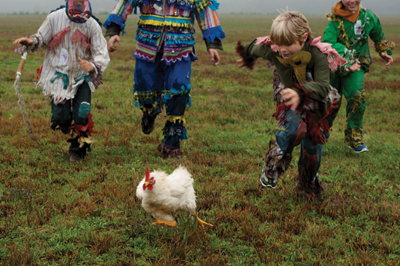 The damp, fertile farmland of the “Cajun Prairie” (stretches of St. Landry, Acadia, and Evangeline Parishes) is home to centuries-old folk traditions that have their roots in medieval France and the Acadian exile from rural Canada.The Mardi Gras courir is one of the most persistent and beloved of these traditions. 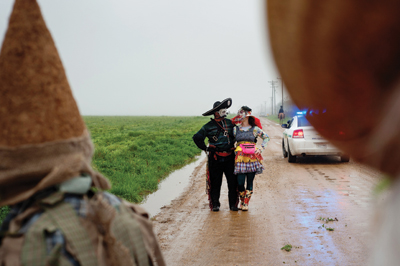 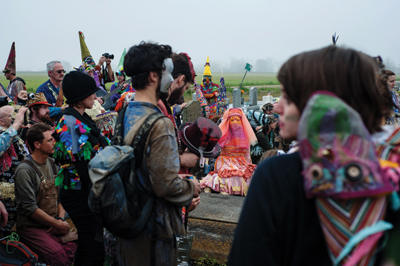 The Faquetaigue courir takes riders down country roads and across fallow fields on the circuit of the rural neighbors. It includes a stop at a small cemetery, where musical homage is paid at the grave of legendary Cajun fiddler Dennis McGee. 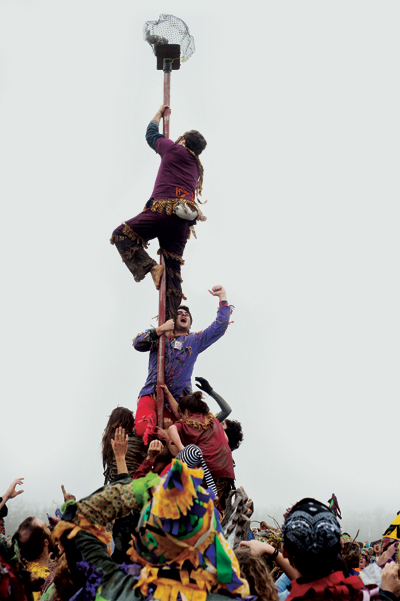 Though chicken-chasing is de rigueur for all courirs, some like to add old-timey farm games into the mix, including Faquetaigue’s yearly challenge to “rescue” a caged guinea hen from the top of a greased pole. 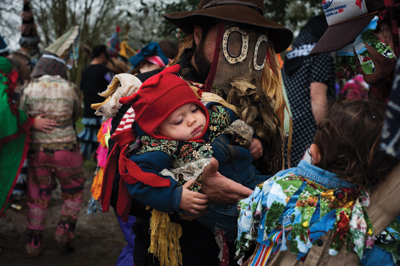 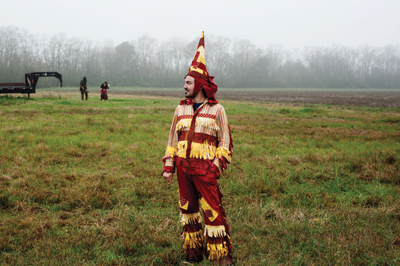 Joel Savoy, musician and record producer, is the scion of a musical Cajun family (his father is famed accordion builder Marc Savoy, and his mother, Ann Allen Savoy, compiled the definitive folkloric collection of Cajun French songs, his siblings also perform). Savoy founded the Faquetaigue courir a decade ago with some friends. 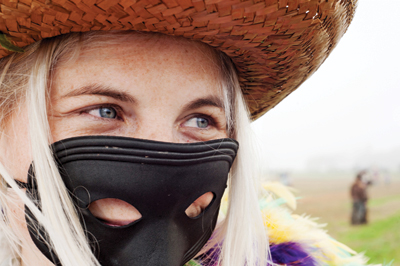 The masking tradition allows for anonymity — a rarity in tight-knit rural communities — as well as the trouble-making and revelry that comes along with it. By the end of the day, though, it’s not uncommon for the DIY costumes to have largely disintegrated. 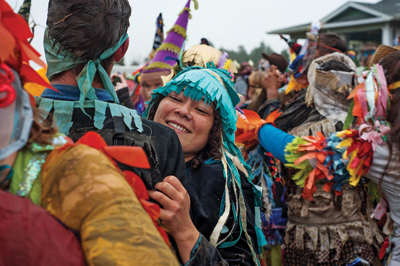