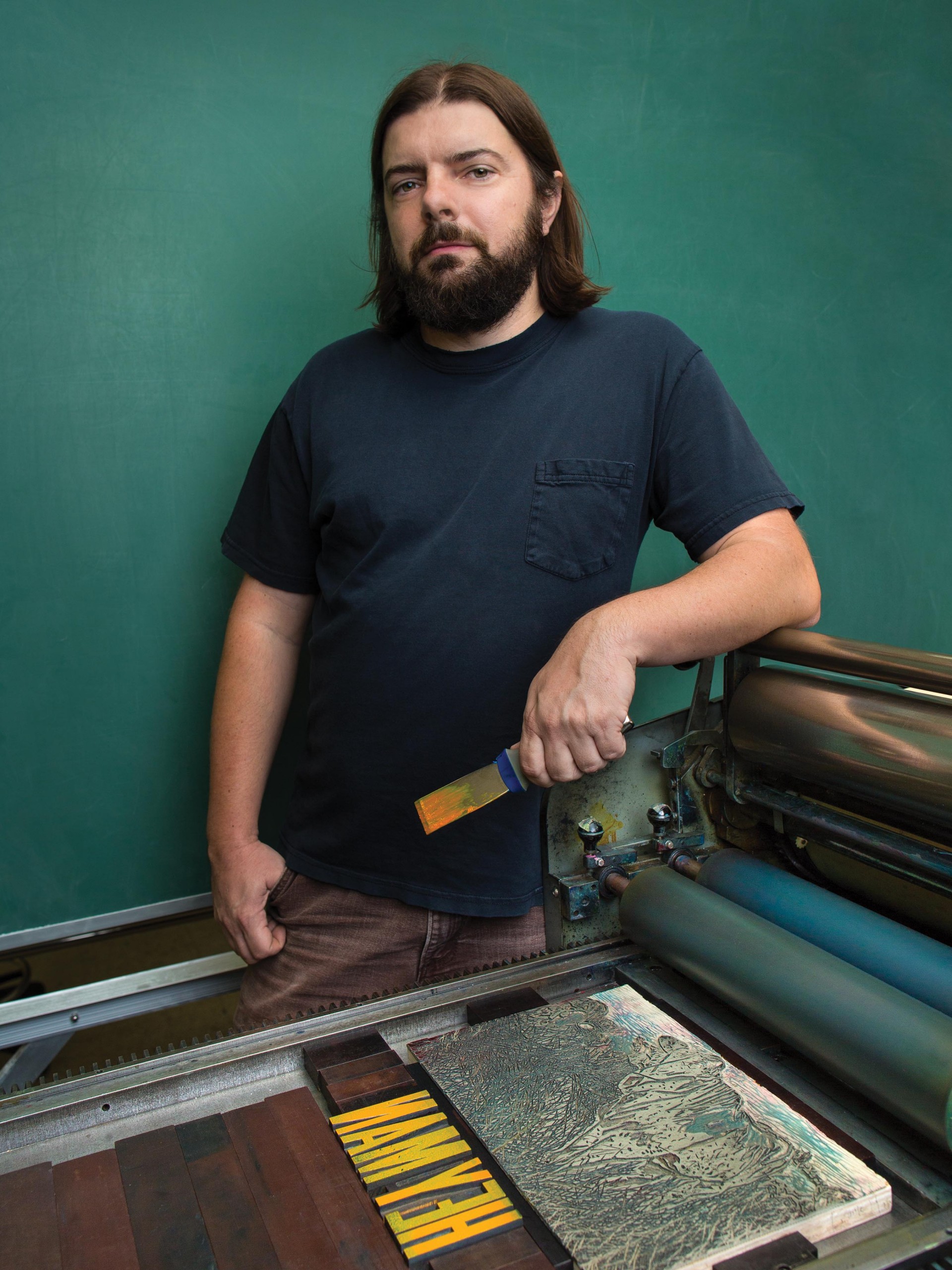 He’s no fortune teller. He makes paper. That’s how Frank Hamrick knows the exact future of the T-shirt he’s wearing, and it’s not the bottom of a drawer or on the racks of a nearby Ruston thrift shop.

He’ll boil the cotton garment, beat the slurry to a pulp, then dry and press it as pages to use in a brand-new book.

“It’s getting a little worn, so I’ll turn this shirt into sheets of paper,” he says in a grainy Georgia drawl. “If you ever hear ‘that guy got beaten to a pulp,’ well that phrase relates back to making paper.”

Though he creates vivid letterpress greeting cards and a recent project saw him collaborating with roots music icons Gillian Welch and David Rawlings on a book about their archival recordings, Hamrick’s work most often tailgates his own visual fantasia, a blend of rough-hewn paper-making and book-binding, film and tintype photography and the surprises of curating a litany of curiosities.

With work housed in permanent collections in New York City, London and across the South — iconic photographer Sally Mann is a fan — Hamrick serves as an associate professor in the School of Design at Louisiana Tech University. In his spare time, he conducts workshops like the ones he held last summer at the prestigious Penland School of Crafts in Asheville, and creates his own commecial and fine art books, not all of them borne out of old T-shirts.

It’s a passion that began while he was rolling on a half-pipe in the backyard of his childhood home.

Hamrick was gifted his first camera at age 10, and quickly found a niche taking photos of his friends and fellow skateboarders.

“Finding your place and your individuality to create something that’s rewarding for you personally is so important, and that’s what I tell my students,” Hamrick says. “I wasn’t going to play ball or even pursue skateboarding professionally, so photography set me on my path.”

Hamrick grew up in Macon, Georgia, a quiet town in sheep’s clothing, so to speak. Beneath a Southern Living surface lies a haven of hawkish creative history, from the Southern sprawl of The Allman Brothers Band who invented jazz and blues-infused jam rock there in the early ‘70s, to the birthplace of the blaring boogie of Little Richard, a black and gay gospel singer who lit a match on rock’n’roll with “Tutti Frutti.”

As a teen, Hamrick interned at Capricorn Sound Studios where the Allmans cut “Midnight Rider,” and today his work reflects that same mystery of Macon’s duality with river-deep measures of poetry and a wink of modern mythmaking.

“I am drawn to words and images that suggest something beyond what they simply state and show,” Hamrick says. “When making a piece of work, I don’t want to just throw a rock in the river. I want that stone to skip as many times as possible and ripple the water with every bounce.”

With titles like “I Found It When I Stopped Looking,” “A Rabbit Runs in a Circle” and “It Was There All Along,” Hamrick’s books are found-art journals of a Deep South that still exists if one only stays for one more song, or keeps walking even though it’s getting late, or turns first to the note-splattered, dog-eared chapter, or rolls down the right dusty road.
“Books are intersections of many things,” he says. “It’s a time-based media. You have to spend time with it, like a movie or a play or an album of music. With my books, I want it to feel like you went for a drive through this other world.”

For Hamrick, holding a book in his hands makes experiencing art truly tactile, and it creates content that is more engaging than something shining on a device, because it fires up feelings and imagination equally.

“The more senses you can activate, the more memorable it is,” Hamrick says. “What do you get with a book instead of reading or looking at art on a device? You get something that expresses permanence. But at the same time, books can be damaged or lost, so you get something precious.”

Between Georgia, New Mexico and Louisiana, you’ve experienced the land and cultures of three very different areas in the Southern U.S. How has living in Louisiana made a mark on your work? Living in those states, as well as Maine and Italy, revealed what is consistent from one place to the next and what is unique. Louisiana has made me understand cause and effect on a deeper level, studying history to see how actions from the past led to the way things are today. But also, being in a small college town has helped me realize the impact a single person can have.

What is one theme or subject for a book you have not explored yet but want to tackle? I regularly visited the Rio Grande while attending graduate school at New Mexico State University in Las Cruces. People often hear about the river in the context of national border issues. But I would like to travel the Rio Grande to make a photography book approaching the river from a personal, ecological perspective. Perhaps not even telling viewers what they were seeing, then reveal the river’s name at the end so people could really reconsider that part of the world.

When not creating or teaching, what do you do for fun in the Ruston area? Do you travel much these days? I love catching live music here in Ruston where I have the chance to interact with musicians like songwriter Kevin Gordon and bluesman Robert Finley. I am also working with other artists in town on a long-term project to convert the former city pool into Ruston Skatepark.

If you could collaborate with anyone famous on a unique book project, who would you collaborate with and why? I grew up with storybooks accompanied by vinyl records that played while I followed along, reading and looking at the images on the pages. It would be great to collaborate with a musician like Wilco’s Jeff Tweedy, so the sound recording and the visual book could function like instruments in a band creating a more enveloping piece of work that is touched, seen and heard at the same time.

Whether it’s an esoteric title, the artifact feeling of a texture or paper choice, or the imagery inside, your work seems steeped in mystery. What is it about mystery do you enjoy putting out into the world? Allowing room for the audience turns writing and visual art into performing arts. It is an open-ended equation of the art plus the audience equals something unexpected and rewarding. Every audience member brings their own interpretation, creating the opportunity for something new each time, especially if the art points people in a direction without predetermining the destination.

Let’s Go: Where the Writers Lived in New Orleans