When I would recreate myself, I seek the darkest wood, the thickest and most interminable, and, to the citizen, most dismal swamp. I enter a swamp as a sacred place — a sanctum sanctorum. There is the strength, the marrow of Nature. — Henry David Thoreau’s Walking (1862)

Paul Neff has discovered that art is a good excuse for a walk in nature with his dog, Bootsy, especially a walk through the natural landscape along the bayous and rivers and in the gentle wooded hills in the western Florida parishes near Baton Rouge. He is an artist who has only begun a long journey in developing his talents as he explores the Louisiana landscape.

The affable 42-year-old Baton Rouge painter in a straw hat is never without his paints and sketchbook when he drives around the countryside with Bootsy in his old pickup truck. Images for possible paintings rise in his mind like imaginary road signs as he drives along back roads. He stops, takes notes about a place and location and perhaps does a quick color study in his sketchbook. He returns later to do a full painting. 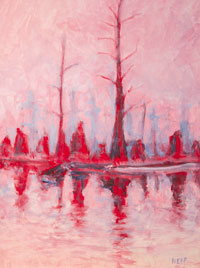 Like the impressionist painters of the late 19th and early 20th centuries, Neff is a plein-air painter; that is, he paints outdoors, on location, and not back in his studio with photographs or notes as do many painters. “By painting on location,” he says, “you can capture more light, the feel of things and the natural colors. If you use a photograph, you’re just reproducing the photograph. Plus, I just enjoy being out there with my dog. I love walking in Tunica Hills or along Thompson Creek near St. Francisville or along the Mississippi River. I just enjoy the solitude, the peace and simply being out there and having something in the end. Painting is a meditation that puts you in a zone where you’re taking in and appreciating nature and having the challenge of accomplishing something you can be proud of. My paintings are like a memory of a nice day out where it’s beautiful.” Through his paintings, we get to share those memories.

In a way, Neff’s comments and thoughts recalled to mind what Mississippi landscape painter Robert Malone once said about plein-air painting, the nature of landscape painting and the role of an artist. “Landscape painting,” he said, “is a source of spiritual connection to the mystical elements of human existence. Nature is the force of life on earth, and people will always struggle to express their relationship with the natural world. In my landscape I attempt to mythologize nature. My process [plein-air] requires being in the presence of the actual landscape in order to create a more immediate vividness of the perception and increase the level of expression. As an artist, I become a bridge or medium to translate between reality and idea. Artists train to become more sensitive to the relationships they see in the world, and that’s what they’re trying to explain. In a sense, you’re explaining yourself to yourself.” 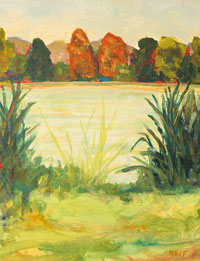 For centuries, poets have expressed in sonnets the beauty of nature. Artists such as Neff turn to paints and canvas, while others simply find it in Thoreau’s “sacred place, a sanctum sanctorum,” walking along a mountain path, paddling through dark, swampy bayous, or simply taking an early-evening stroll along an ocean beach on an outgoing tide. Ansel Adams believed the wilderness possessed healing spiritualities: “As the fisherman depends upon the rivers, lakes and seas, and the farmer upon the land for his existence, so does mankind in general depend upon the beauty of the world for spiritual and emotional existence.”

During the 19th century, artists were enchanted by radiant sunsets and by the warm, ethereal haze of foggy morning light in a misty Louisiana swamp; the drama of the Rocky Mountains; or the tranquility of an Appalachian waterfall. Even in mid-19th-century Great Britain and France, artists – such as J.M.W. Turner and John Constable in England and the Barbizon and later impressionist painters in France –– turned to nature as a spiritual escape from the rapid industrialization of their cities. “Salvation,” said 19th-century impressionist painter Camille Pissarro, “lies in nature.” 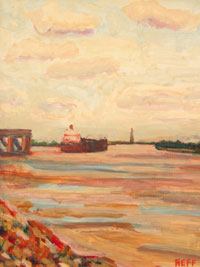 Like the impressionists, Neff –– who has painted for only a couple of years now –– is developing a loose and energetic style with broad painterly brush strokes. You can see it in his paintings Cypress Stumps and Mississippi Morning. Other paintings are more controlled, such as Tanker and Port of Greater Baton Rouge. His brush strokes leave visual impressions or suggestions for the viewer’s imagination to fill in details.

He also uses a mixed palette that ranges from soft and warm tones to bright, intense colors. Neff likes to paint with oils because of their rich colors, but acrylic paints are easier to use on location, and they dry faster than oils. He also paints in the middle of the day when daylight is most intense. Most artists prefer morning or late-afternoon sunlight for the warm tones and dramatic shadows. “I like sunsets,” Neff says, “but they are more fleeting.” His paintings are mostly small, about 12 inches by 12 inches or smaller, because he can complete them quickly on location. “I like the inner satisfaction of finishing them on the spot,” he says.

Although Neff acknowledges the influences of the impressionists on his style, he says he is gravitating more to the bright and energetic palette and imagery of the postimpressionist Paul Cézanne. But most of all, Neff says the artists who have had the greatest influence on his work are New Orleans artist Robin Durand and Baton Rouge painter Charles Barbier. “I am only in the beginning stages of my career,” he says. “I have a long way to go, and it takes a lot of time to see progress. Other artists have been very helpful and supportive. Barbier and I paint together. I watch him paint. We share ideas. He gets ideas from me, and I get skills from him.” 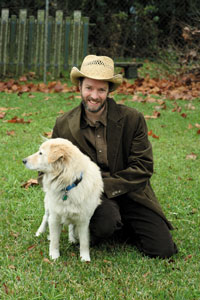 Actually, Neff is quite involved with nature in matters other than art. He owns and operates his own landscape and lawn service. His goal, however, is to become a full-time artist. When he is not keeping up with his clients or painting, Neff’s on a washboard playing zydeco and bluegrass music in a pickup band with a couple of buddies. They have a few gigs now and then. On Mardi Gras Day 2007, he took his washboard down to New Orleans and joined in with a few other street musicians.

“There were so many people playing music in the streets, everything from troubadours to dancing voodoo queens,” he says. “I encourage everyone to grab a washboard and go down to New Orleans.”

Neff’s music and his paintings seem related. Both explore the rhythms of Louisiana –– one visual, one aural –– and both are “memories of a nice day.”