Plight of the Honeybee 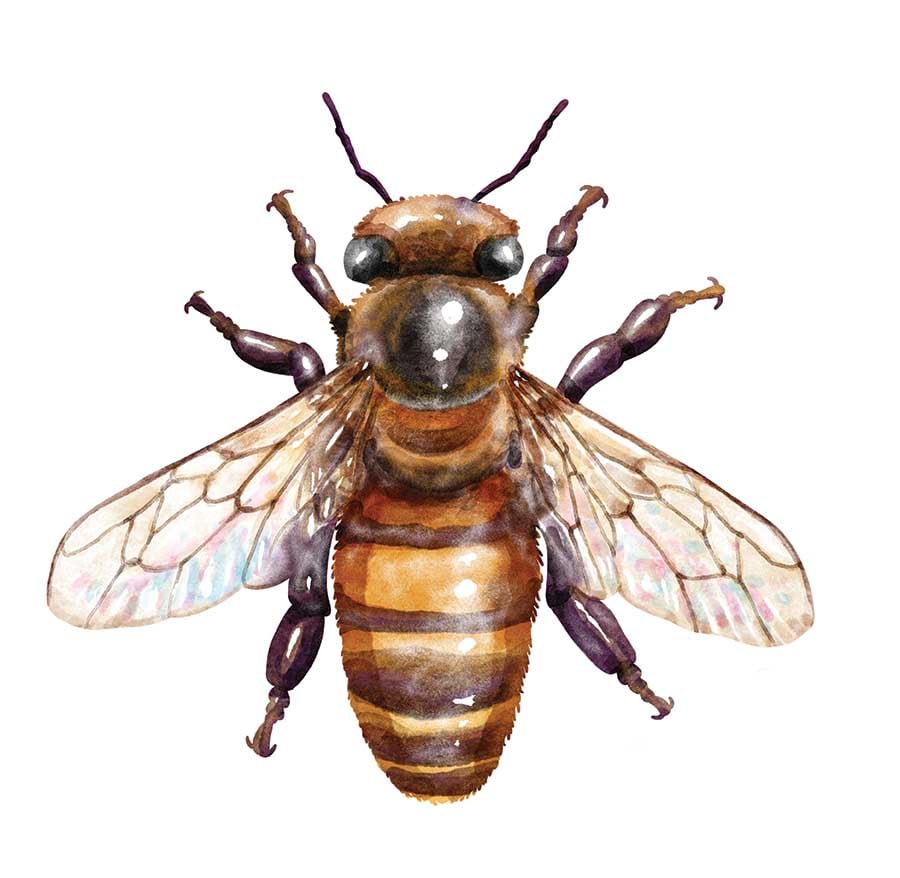 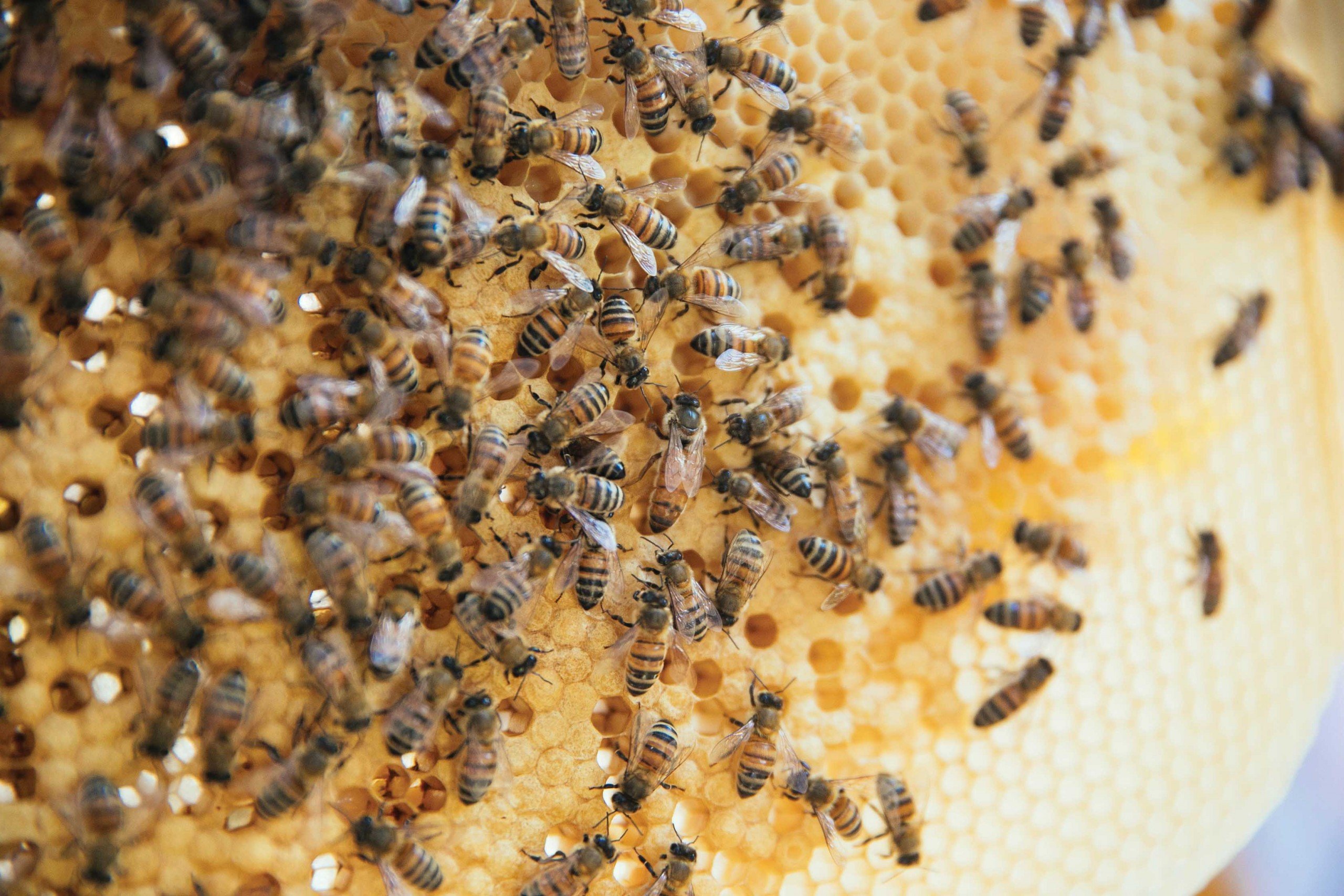 In the ‘70s when many Americans were making a return to nature, Jeff Horchoff thought raising bees might be a fun idea. Bees require little attention once established so Horchoff thought beekeeping would be an easy hobby.

“And if I was lucky enough, I’d get honey out of them,” he said.

As time went on, Horchoff began to take the hobby seriously. He joined a beekeeping club and beefed up his education. A woodworker who makes caskets for St. Joseph Benedictine Abbey outside Covington, he put his skills to use creating hive boxes. He enlisted the Abbey for placement of hives and today maintains about 70 hives on the Abbey property, with another 60 hives located in yards throughout St. Tammany and Washington parishes. He sells his “holy honey” in the Abbey gift shop and shares his knowledge with prospective beekeepers through weekly posts on his YouTube channel.

He’s not alone. There were 2.88 million bee colonies counted in the United States this year, according to the U.S. Department of Agriculture, up 8 percent from 2019. That figure has been rising steadily for years.

A honeybee colony consists of a single queen, hundreds of drones and thousands of worker bees. Each has their own role to play to maintain the health of the colony. 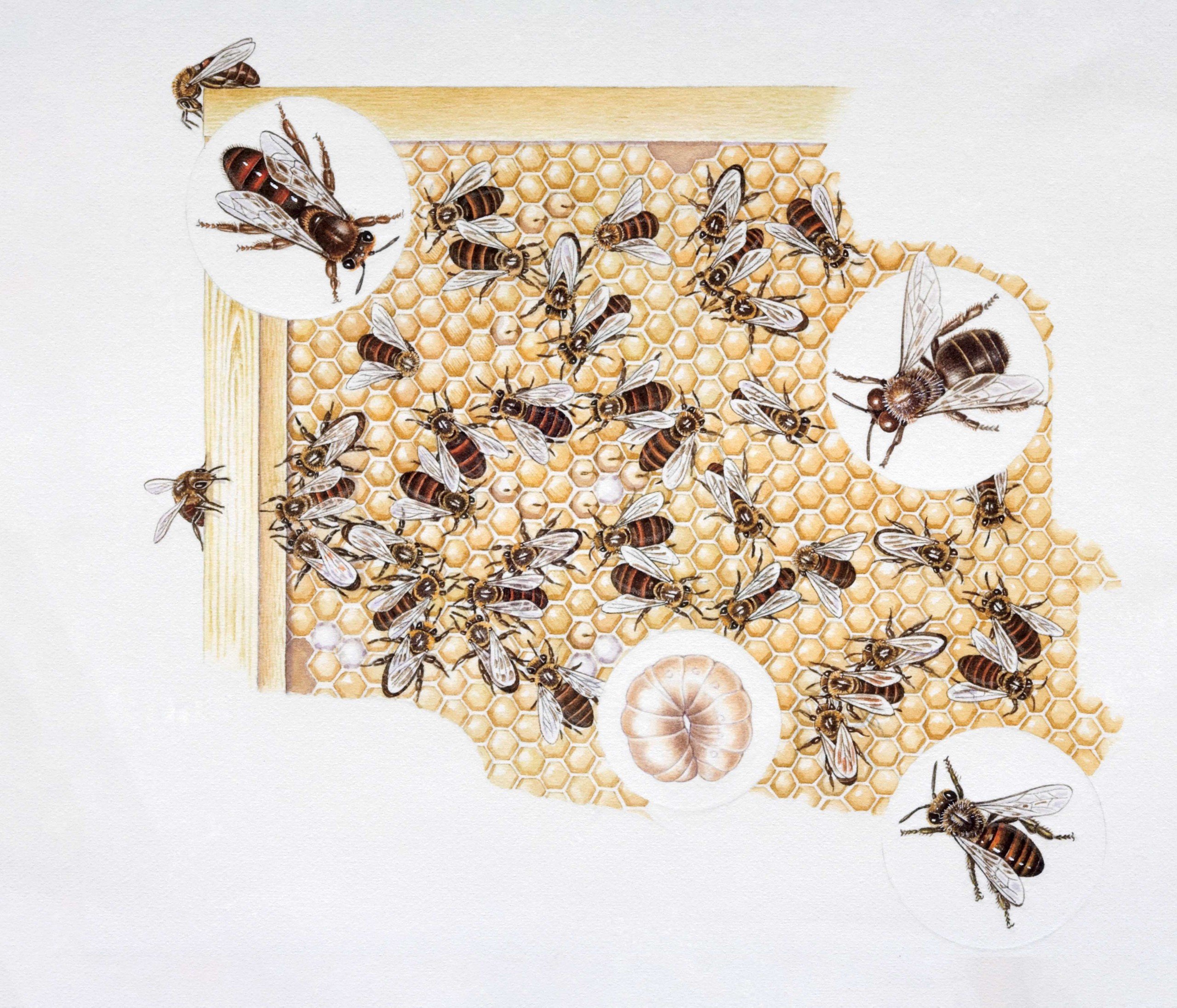 BROOD: There are three development stages in bees which collectively are known as brood: egg, larva and pupa.

Each colony has only one queen. Her primary role is reproduction, producing around 1,500 eggs a day. The queen’s secondary function is to produce pheromones that keep the female workers sterile, inhibit the development of new queens and improve colony cooperation.

Worker bees are the largest population in the colony and are all females. Specific job duties are performed at different points in their lives. These duties include: secreting wax for the hive, foraging, creating honey and defending the hive.

Male bees are called drones. Drones lack stingers and the necessary body structure for collecting pollen. They live for one reason — to mate with the queen bee. During the winter season, or when there is lack of food, worker bees force the drones out of the hive where they will starve and die.

Beekeeping is big business in Louisiana. Honey production from the state’s 54,000 honey producing colonies increased 4 percent in 2019 with honey valued at $7.93 million that year, up 11 percent, according to the USDA.

In addition to providing delectable honey, bees pollinate one-third of everything we eat.

The majority of Louisiana crops, however, don’t rely on honeybee pollination so bees are not as likely to be affected by agricultural pesticides, said Keith Hawkins, area horticulture agent with LSU AgCenter. Coupled with the state’s abundance of wetlands filled with nectar-producing plants and Louisiana offers an ideal habitat for the honeybee, the state’s official insect.

“In Louisiana, our bees are doing pretty well,” said Hawkins, who produces the Beehive Buzz newsletter for honey producers.

The nation’s honeybees have been suffering for years from destructive species such as varroa mites, a bee parasite, and hive beatles, whose larvae ruins honey in weak hives, Hawkins explained. Russian bees that are resistant to mites have been introduced in Louisiana, allowing them to merge with existing hives and the result has been largely successful, he said.

“I would say there’s like a bubble down here,” Horchoff said, adding that less pesticides and swamps full of nectar make for a perfect combination. “We’re blessed with the right temperature and lots of food. We really are lucky. We have an abundance of bees here.”

Many Louisiana beekeepers will rent their hives and move them where needed, such as California’s almond orchards, which is entirely dependent on honeybee pollination. This could put strain on bees and cause issues, such as Colony Collapse Disorder, Hawkins said.

“[Bees] would much rather be in a hive or a honey tree instead of being moved around,” he said.

There’s still cause for alarm since bee the population in the U.S. has been declining drastically over the years. A recent study from the Bee Informed Partnership, a nonprofit associated with the University of Maryland, found a 40.7 percent decrease in the American managed bee population (commercial beekeepers) from April 1, 2018 to April 1, 2019.

“We’re blessed with the right temperature and lots of food. We really are lucky. We have an abundance of bees here.”- Jeff Horchoff 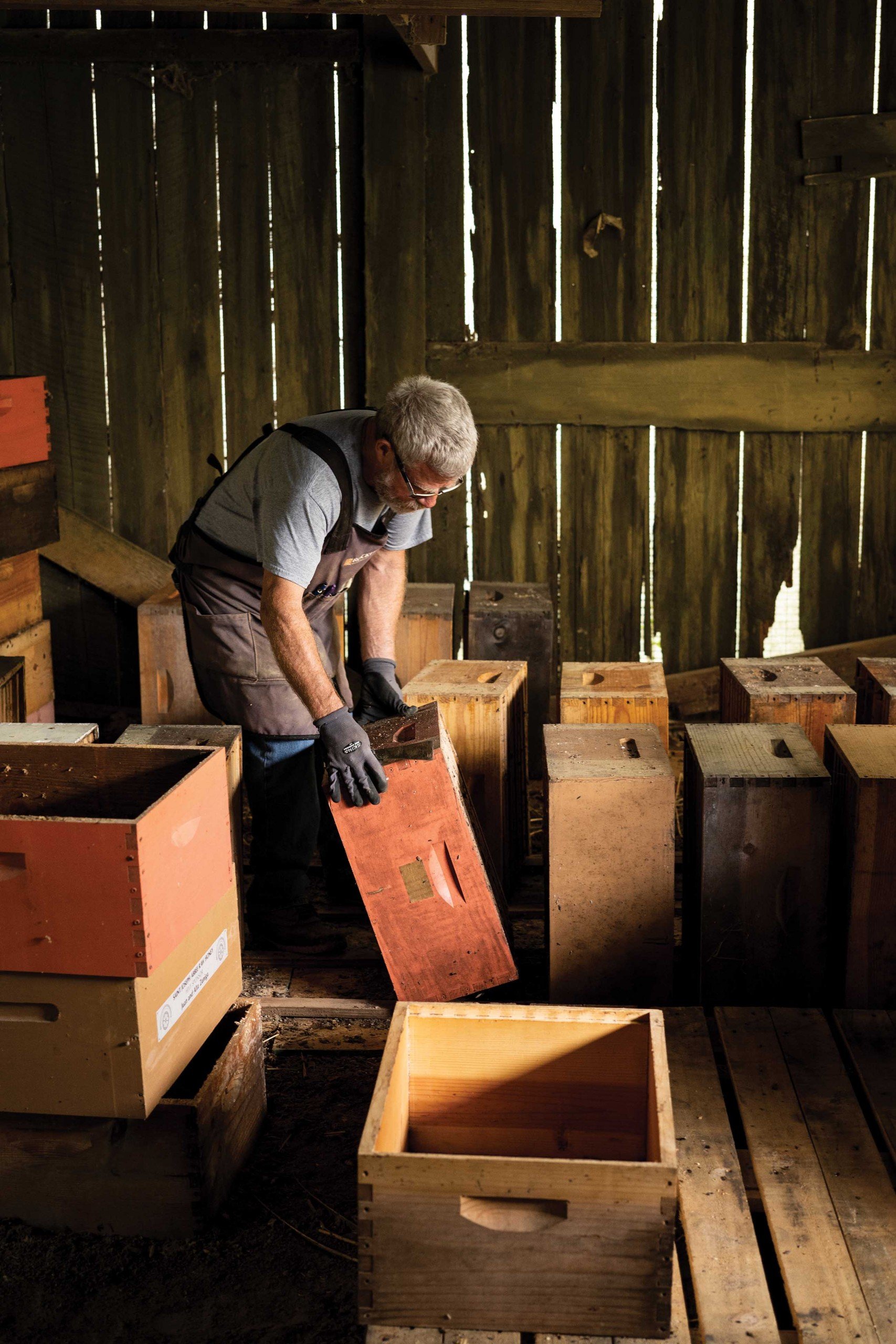 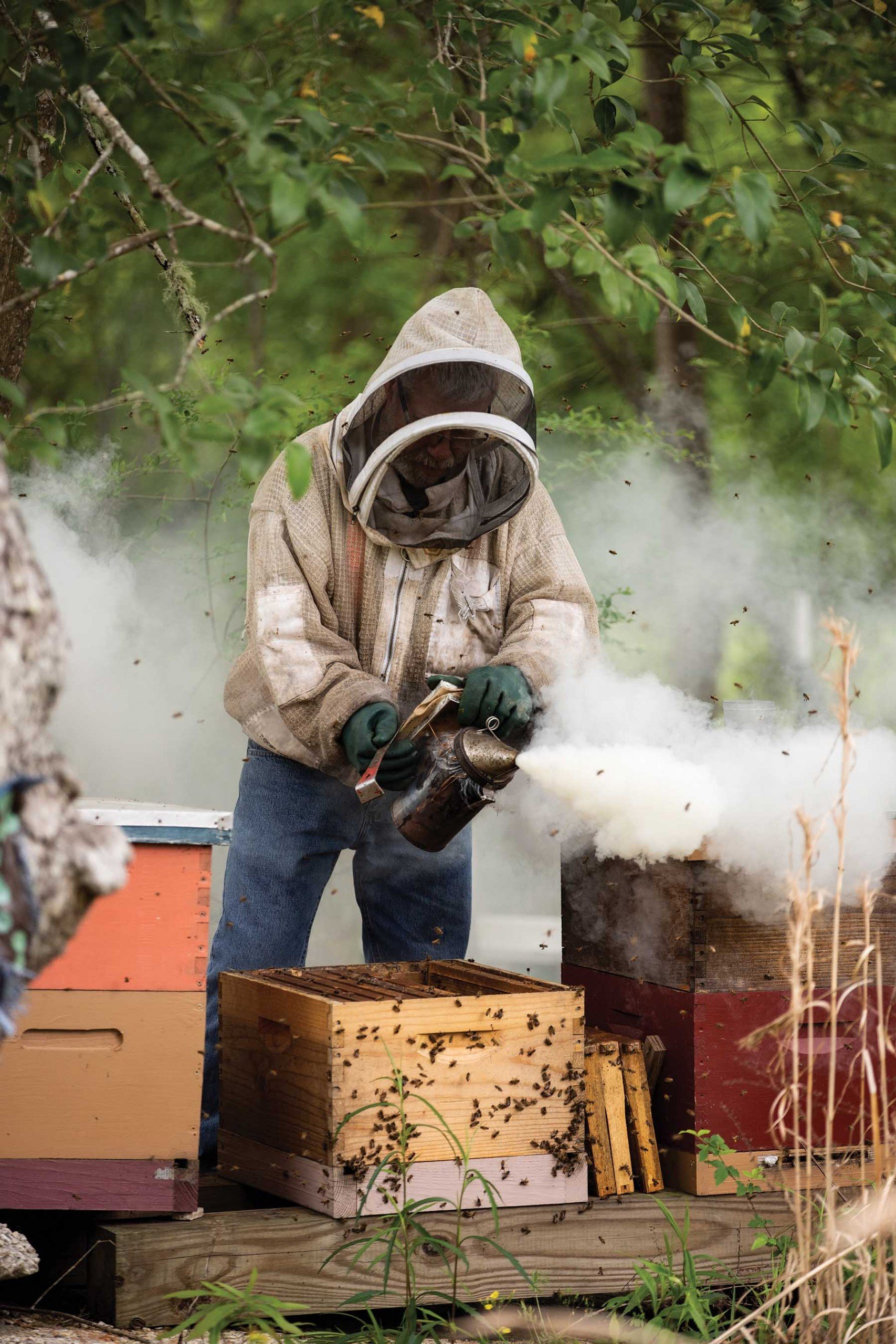 Smoke ‘em if you got ‘em
Though not completely understood, it is believed that smoke masks pheromones that are released by guard bees. This allows the beekeeper to examine and work on the hive without triggering the bees’ defense response.

Straight from the Hive

Travis Thompson loves to speak in metaphors when discussing a business that’s near and dear to his heart. He tends bar one day a week at Port of Call in New Orleans’ French Quarter, but dedicates the rest of his time tending 50 hives on Jesuit Bend in Plaquemines Parish, producing honey for his company, Raw Honey New Orleans.

“It’s my own little punk rock band,” he said of his bee hives.

Like many beekeepers, Thompson lets the bees do their thing, gathering flower nectar from the surrounding area and heading back to the hive where bees break nectar down into simple sugars stored inside a honeycomb. Bees then use the flapping of their wings to dehydrate the nectar and the result is something smooth, golden and oh, so sweet.

Once the hives become full with the sticky substance, Thompson “pulls” honey from the honeycomb. Without intervention, the bees will swarm and move to another location and start building a new hive. It’s a guessing game when honey will be ready for production. For instance, Chinese tallow trees bloom in spring and most hives will produce tallow honey in late April, early May, depending on weather conditions, Thompson said.

“It’s like catching a wave,” he said. “You know it’s coming but you don’t know when it’s coming to get up on your board.”

Most of the time, the bees don’t bother him as he removes the honey.

“They’re cool as cucumbers and Hindu cows,” Thompson said. “It’s a real zen moment. I never have to worry about getting jumped.”

Urban beekeeper Dan Fox fills about 24 mason jars from each pull of his hive that’s placed 20 feet from the back door of his Gretna home and surrounded by a fence to keep his dogs from “sticking their noses in.” Usually, he pulls honey in mid-spring, mid-summer and September, then lets the bees store their fuel for the winter to keep them well fed and healthy.

“If it gets too full, they will leave,” Fox said, explaining that taking the honey doesn’t starve the insects, nor deter them from their work. “They’re hoarders. They always need something to do. They’re making more honey than they can use.” 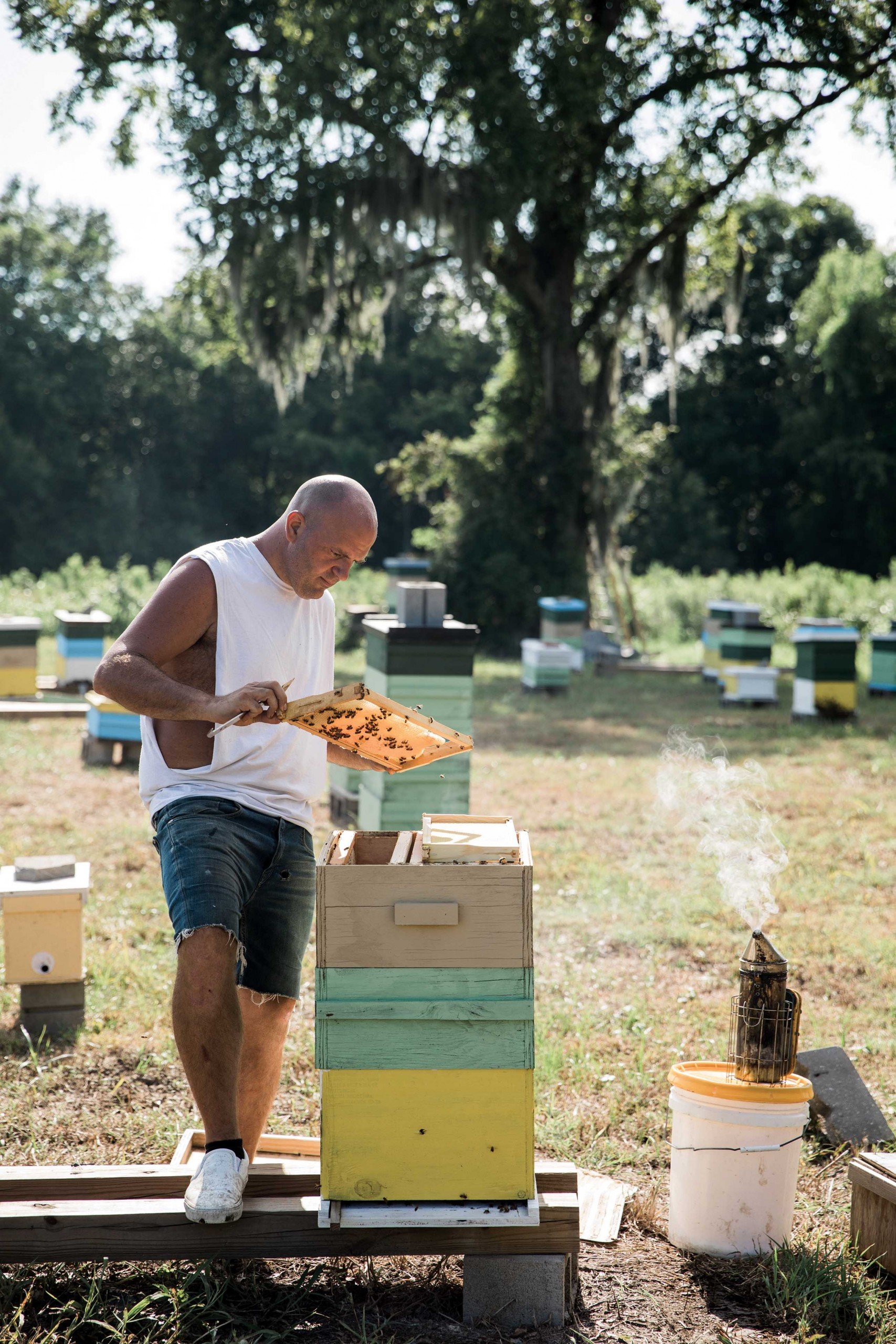 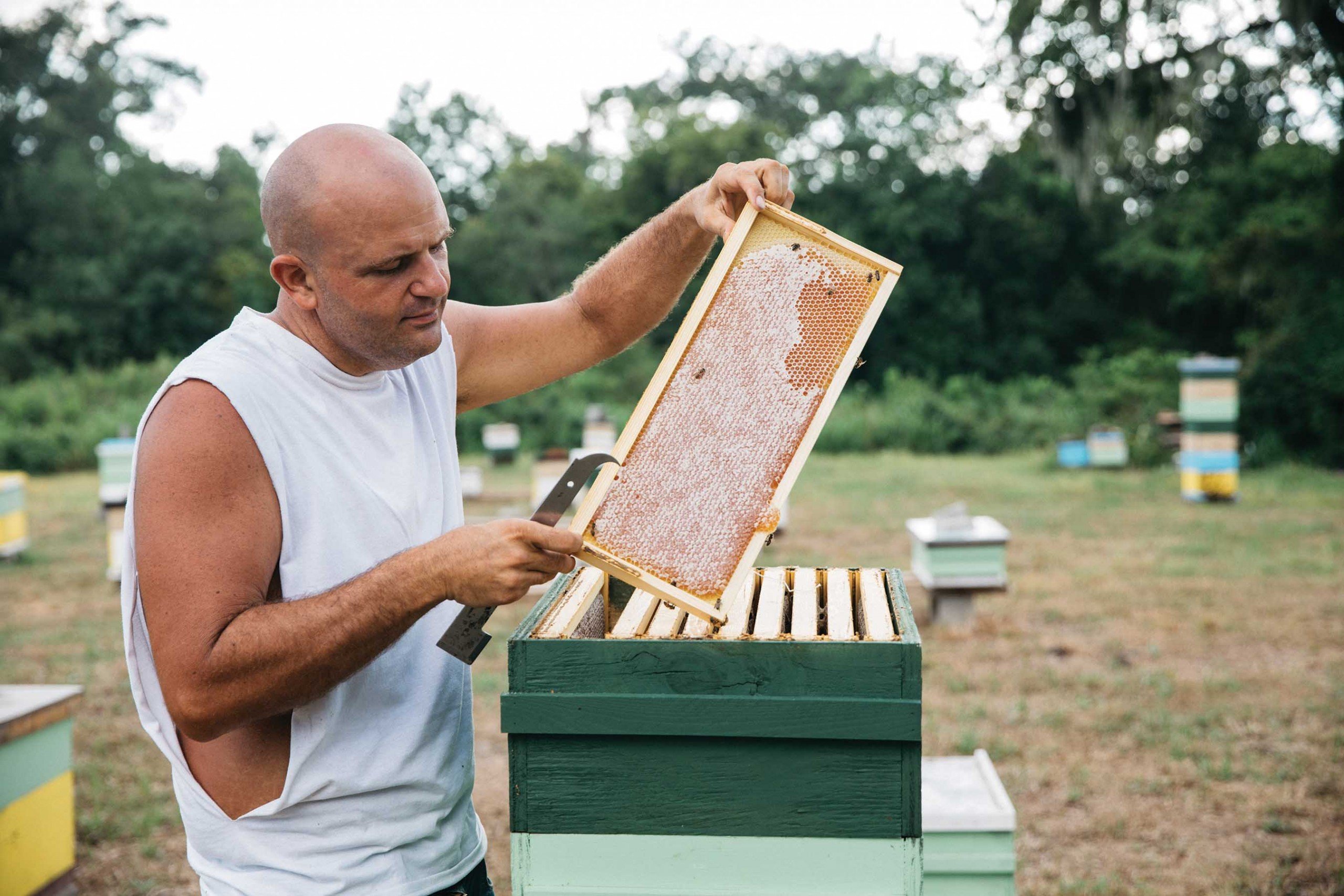 The Buzz on Bee Removal
We may love our honeybees and appreciate their role in pollinating our food and creating honey, but that doesn’t mean they’re welcome in our homes. There are numerous professionals throughout South Louisiana who conduct swarm removal of honeybees and other insects, such as wasps. Some removal specialists will donate bee hives to local beekeepers. For a list of professionals, visit LSU AgCenter’s website at lsuagcenter.com.

Thompson only sells his raw honey to restaurants, a few private businesses in the New Orleans area and a few individuals who request it. He prefers his “door-to-door” delivery service, which he compares to pizza delivery.

While some commercial honey producers heat and pasteurize their honey, and the U.S. continues to fight off adulterated foreign honey imports, most small beekeepers leave nature in its pure state.

Thompson removes the honey from the hive and places it in a hot room to pull out moisture, humidity that may cause honey to ferment. The honey is then poured into jars and ready to sell.

“My honey never touches heat,” he insisted. “Never. I like it that way. Tastes better and it’s better for you. It’s super food.”

Horchoff sells his Abbee Honey pure and raw, no pasteurization, no filtering.

“It goes straight from the comb to our drums,” he said. “It’s like eating honey comb without the wax. It doesn’t get better than that.”

Honey contains vitamins, minerals, amino acids and flavonoids, as well as phenolic acids that act as antioxidants, according to the National Honey Board. Some studies have shown that ingesting local honey alleviates allergy symptoms.

“Bees are working the flowers in the area where you live,” Horchoff said. “The particles in honey build antibodies [to fight off allergies]. That’s documented.”

The sweet goodness is also an all-natural product that soothes sore throats and helps the medicine go down.

“Honey is such a perfect product,” said Fox. “It’s the most perfect product nature creates for us and it’s good for you. It’s sustainable. It reinforces the idea that there is a way for us to interact with nature, that there may be a grand design.”

“If it gets too full, they will leave. They’re hoarders. They always need something to do. They’re making more honey than they can use.” – Dan Fox 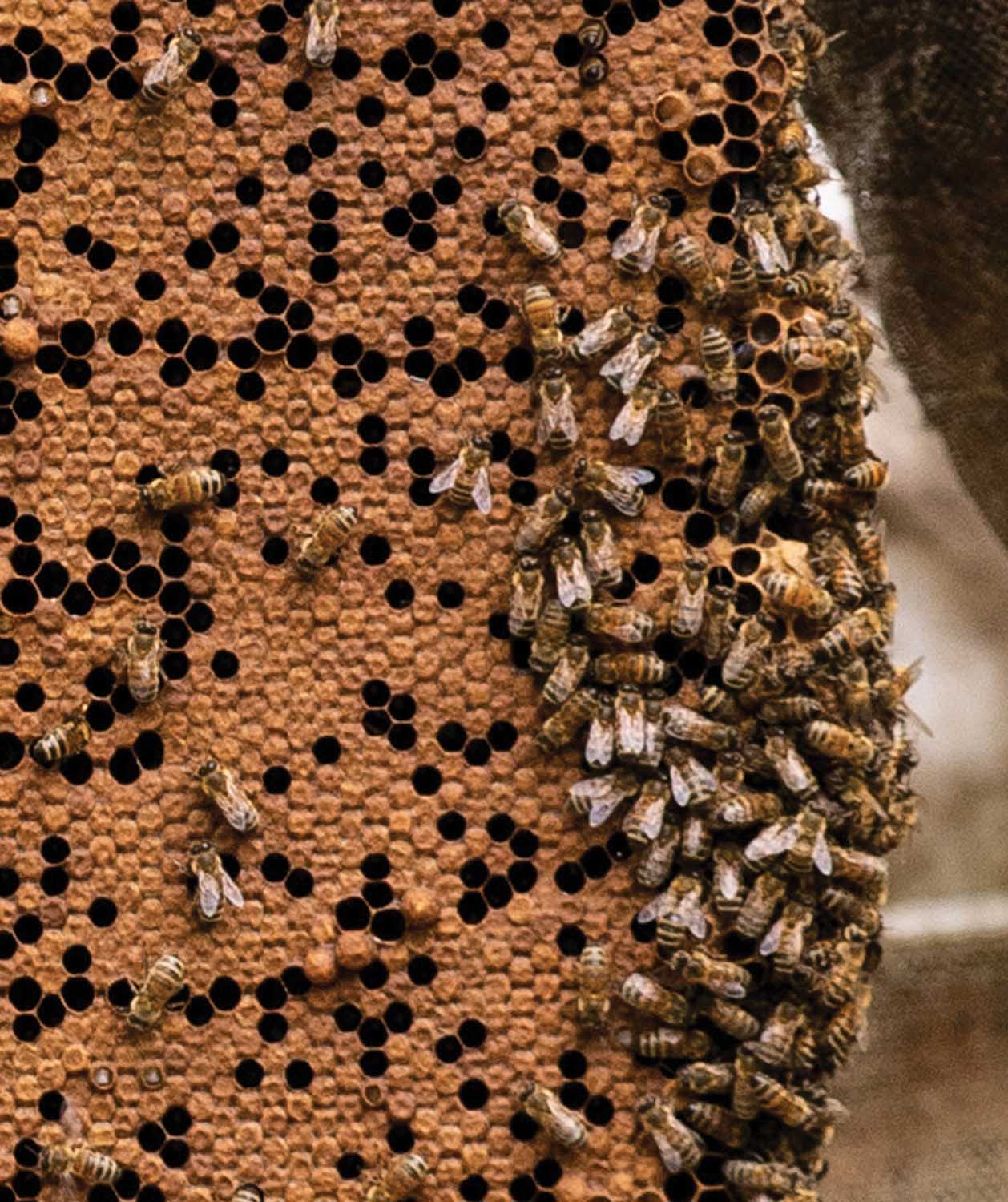 The life cycle of the honeybee varies among queens, workers and drones, but all members pass through the egg, larval and pupal stages before becoming adults. 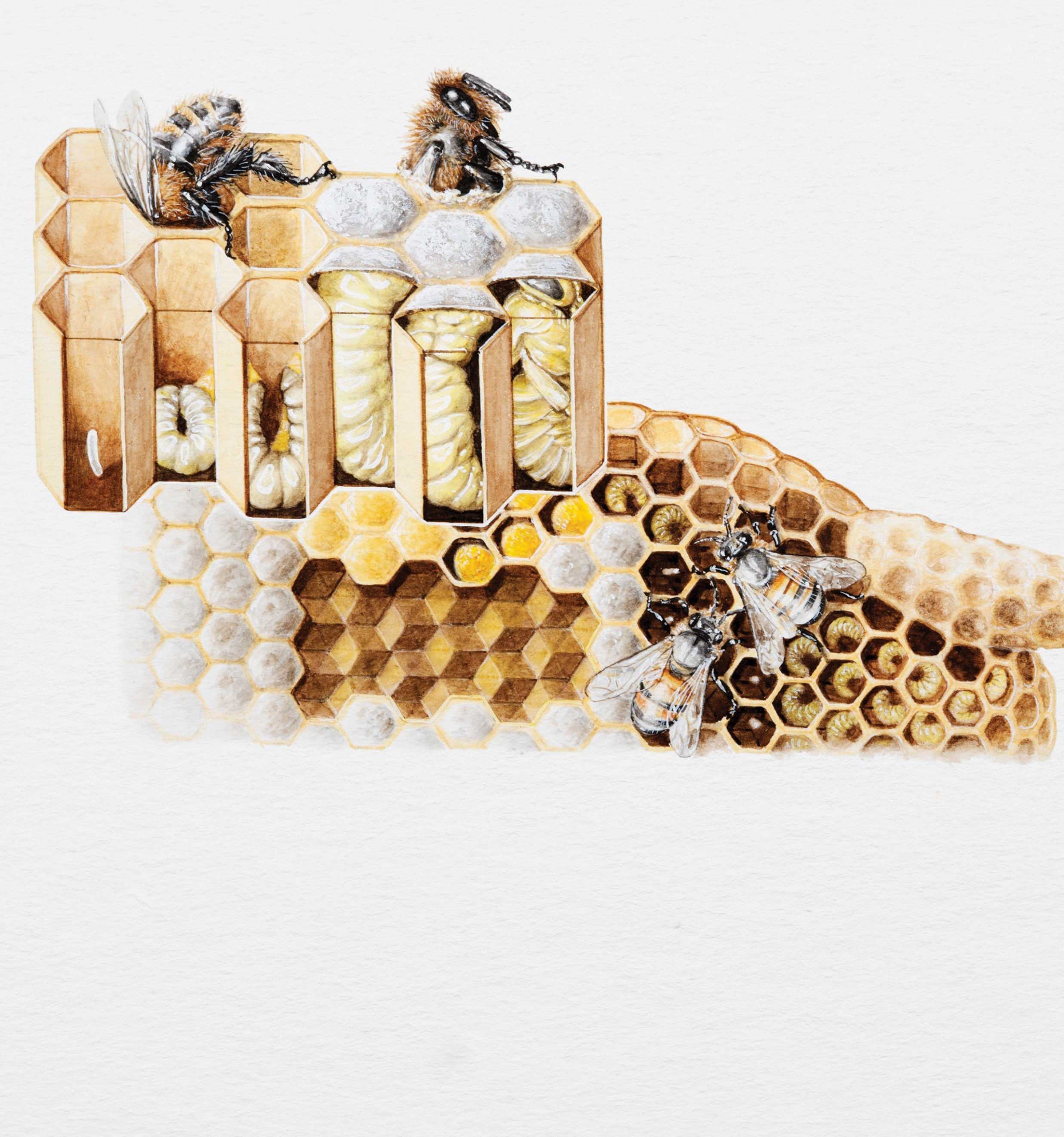 A queen will lay a single egg in each cell. Eggs that are fertilized will develop into workers, while drones are unfertilized eggs.

A bee larva is a featureless white grub that worker bees place in the cell. Larva grow quickly, reaching 1,500 times their original size.

A pupa is large and rapidly taking on the features of an adult. The cell has now been capped with wax by the workers.

Once the bee is fully grown, it will chew its way out from the capped cell. Worker bees will prepare the cell for the next egg.

Long Live the Queen
A queen bee can survive for up to five years, but a worker bee only lives for about 40 days.

It Takes a Hive 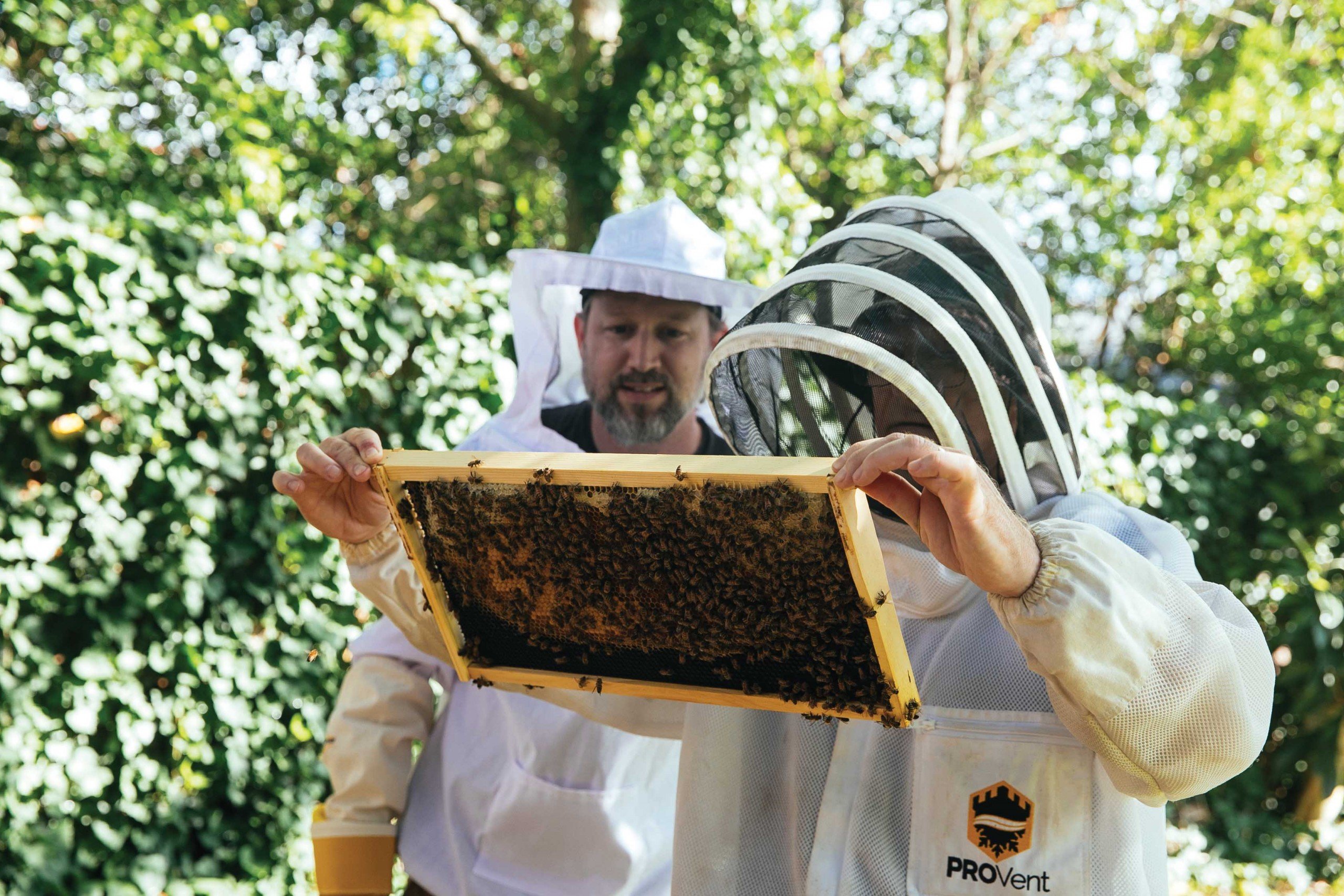 Veteran beekeepers routinely advise those looking to raise bees to join a community and gather knowledge from those who do it well.

Dan Fox of Gretna, for example, had plenty of help from his uncle, Dr. Howard Wetsman, and Travis Thompson, owner of Raw Honey New Orleans. Both helped him start a hive.

“I was interested and they were willing to help me,” Fox said. “I can’t imagine doing this by myself. You really need to get together in the community.”

Thompson agrees that novices should join bee clubs — local organizations can be found through the Louisiana Beekeepers Association — and watch and learn from those who do beekeeping for a living.

For those who would rather keep company with bees instead of people during these ongoing pandemic times, beekeeper Jeff Horchoff, who producers Abbee Honey at St. Joseph Benedictine Abbey outside Covington, films beekeeper videos every Friday for his Youtube channel at youtube.com/user/mygracieme.

Honey has been used by humans for thousands of years, as a sweetener, medicine and even currency. 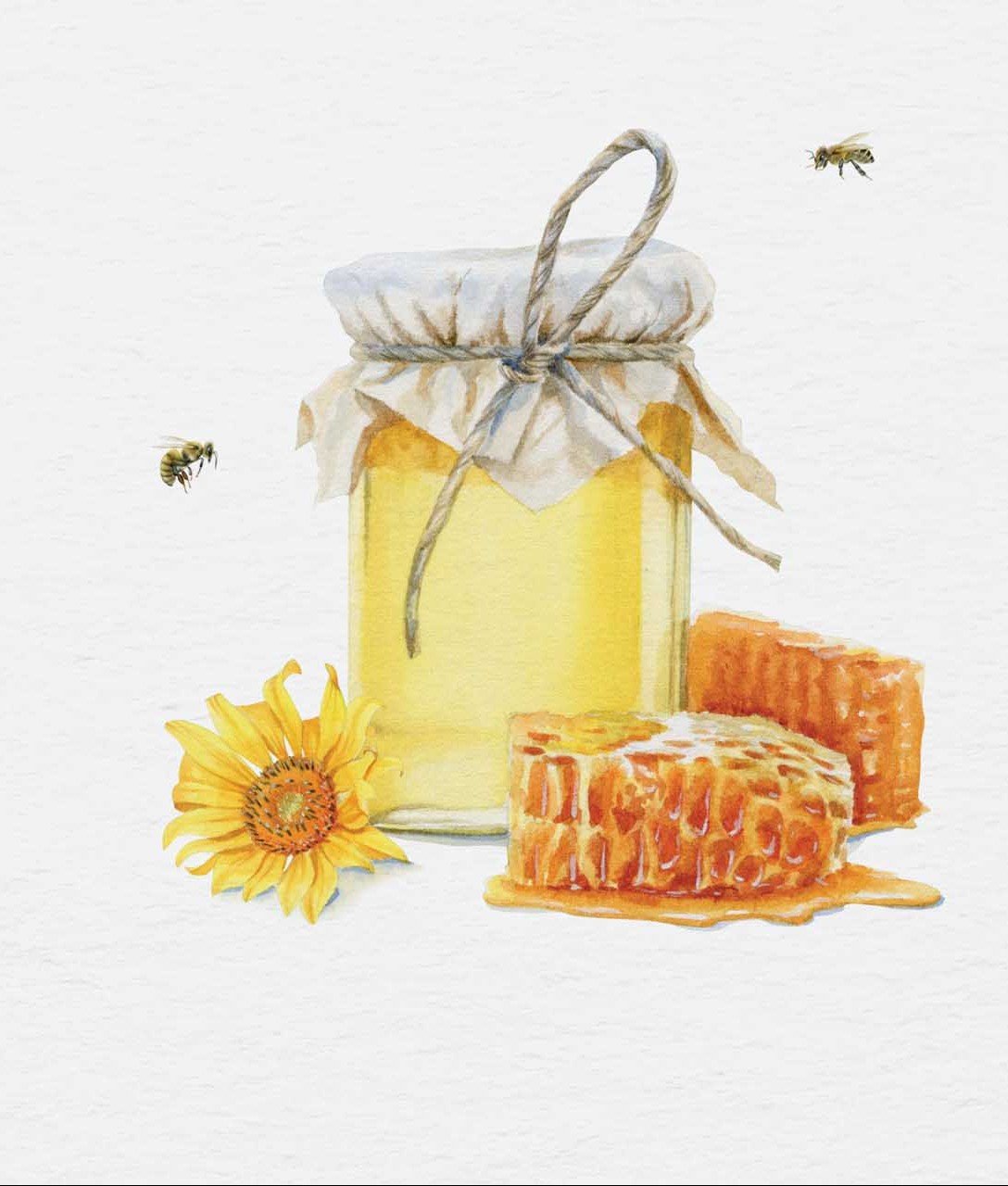 Forager worker bees suck up a flower’s nectar into a special sac called a honey stomach. Once the honey stomach is full, the worker bee returns to the hive.

Forager bees pass the nectar to house bees. The house bees chew the nectar, passing it from bee to bee. Enzymes in their saliva change the chemical properties of the nectar

The nectar mixture contains too much water so the bees must dry it out. They spread the honey out and fan it with their wings.

The bees deposit the honey into cells of the honeycomb and cap it with beeswax to keep it fresh until they are ready to eat it.