As a painter, photographer, former university professor and art museum director, gardener, Francophone, realtor, Paris tour guide and founding president of Lafayette’s Festival International de Louisiane (which recently celebrated its 30th anniversary), Herman Mhire is an inspirational Renaissance Man. Not surprisingly, the fruits of his talents are evident in his home – a 1940 Modernist house in Lafayette’s Oaklawn subdivision. For 24 years, he has cared for, updated and cultivated the house and grounds, respecting its original architectural intent, while putting his unique stamp on the historic property.

Originally built by an architect as his own residence, the one-bedroom house was soon sold to Dr. Clarence Saloom, who also moved in a relatively short time to accommodate his growing family, but kept the house as a rental property. In 1980, The Saloom’s daughter, Patricia, and her husband, Michael Maraist hired Lafayette architect Fabian Patin to renovate the house for their family of three. Patin transformed the house by taking the roof off to raise the ceilings, installing new floors, demolishing the original bedroom, adding a master suite and a second bedroom for the couple’s daughter, turning the original garage into a laundry room and pantry, and updating the original kitchen and bath.

In 1991, Mhire became the fourth owner of the house, a responsibility he’s handled with curatorial skill and gradual stages of renovation. The first stage was the creation of a garden. The house had green lawn, but little substantial landscaping. Mhire embarked upon a do-it-yourself course of removing portions of the existing St. Augustine grass and putting in colorful bedding plants and crepe myrtles. “It was a process of learning by doing,” he says. The second phase began in 1997 with the addition of a 900-square foot studio that Mhire designed. Following Patin’s example (his 1980 addition included casement windows that matched those original to the home), Mhire designed the studio to complement the house.  Because the original casement windows met at the corners, he drew up an airy studio where sleek panes of tempered glass meet in the corner, connecting the indoor and outdoor spaces.  Working with a contractor who cleverly eliminated the need for a corner post by placing cantilevered beams inside the walls, Mhire built the studio as envisioned, with a lofty ceiling made possible by a pitched roof and a striking triangular corner of glass overlooking the yard. “The result is magnificent,” he says. “I can be working in my studio and have an unobstructed view of the garden.” The success of the window design was later carried through to the house, where Mhire replaced all of the casement windows with custom framed Pella windows.

Mhire next turned his attention to a professionally-designed garden. “The studio impacted the appearance of the exterior of the house,” he says. “It called for a more significant [landscaping] plan.” He found inspiration for that plan in his own drawings – a series of large works based on the image of an oval and hired GreG Brandl of Brandl Landscaping to bring the idea to life.  “The idea was to create a central space with trees and beds,” he recalls.  The original footprint, which remains today, included a large oval lawn surrounded by flowers, shrubs and trees. But the grass proved hard to maintain in summer heat and in 2009, Mhire replaced it with with pea gravel. “The French love to use pea gravel,” says the homeowner, who later tweaked the garden once again with crushed limestone for even easier maintenance. Several years ago, he incorporated Japanese black pines and Japanese maples, an automatic watering system and an LED lighting scheme that includes up-lit trees. “The house and garden at night are magical,” he says. The master bath and dressing area have also been adjusted to Mhire’s liking. He renewed the vanity (previously topped by oak flooring) with a seamless slab of Brazilian quartzite and made the dressing area more navigable by moving a chest of drawers (bolted down in the center of the room) to the perimeter of the space.

Mhire describes himself as a minimalist, a tag that’s reflected in both the order of the garden and the simplicity of the interior. As both an artist and former director of the Paul and Lulu Hilliard University Art Museum in Lafayette, he opted for white walls that allow the modernist furniture and art in the house to take center stage. “I have a very busy life so I need to come home to a place that is devoid of static,” he says. As for his choice of furnishings, he says “it’s all Bauhaus all the time.”  His collection includes Le Corbusier’s lounge chair, Mies van der Rohe’s Barcelona chair and Marcel Breuer’s Wassily chair. “It’s all classic Mid-Century design, but so is this house,” he says. “This furniture complements the design of this house.”

An edited mix of artwork – primarily Mhire’s own colorful paintings and photographs and assorted African sculpture acquired from vendors at Festival International –  is displayed throughout the house. The rest of Mhire’s art is stored to prevent the look of clutter.

Though Mhire’s many endeavors include leading trips to Paris, where he guides tourists through gardens and museums filled with art, he doesn’t have to leave home to find either. “I’m a creative person who embraces life and blooms wherever I’m planted,” says Mhire. 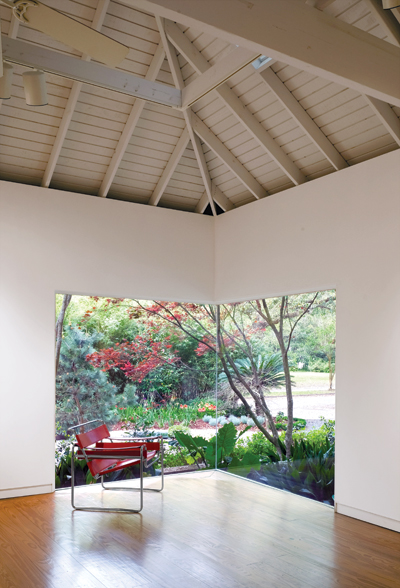 Mhire designed the airy, light-filled studio with a lofty ceiling and an unusual corner of tempered glass. The window was inspired by the bands of casement windows that were part of the home’s original 1940 design and made possible by placing cantilevered beams inside the walls. The color of a Wassily chair complements the hue of the Japanese maple outside. 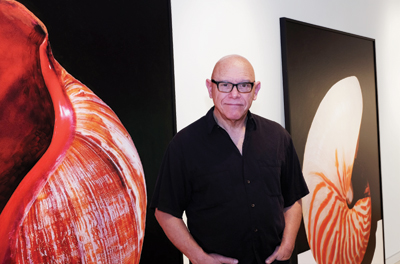 Herman Mhire with paintings from his 2014 “Shells” series. 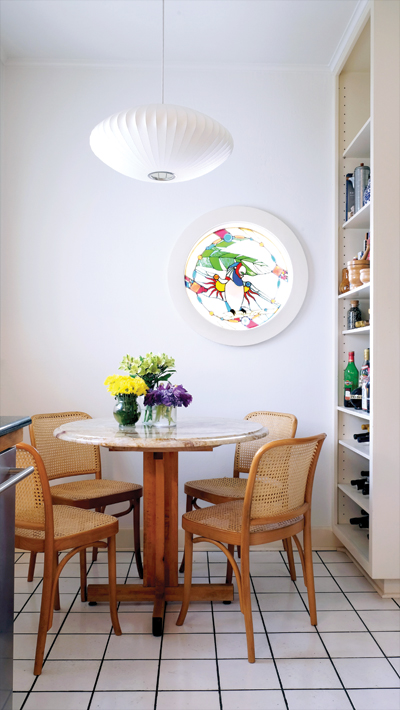 A table topped with the same Brazilian quartzite used in Mhire’s dressing room and paired with Prague Chairs by Marcel Breuer sits beneath a George Nelson Saucer Pendant in the kitchen. The home’s previous owners commissioned Louisiana artist Charles Bazelle to make the round stained glass window, which depicts a parrot and a banana leaf. 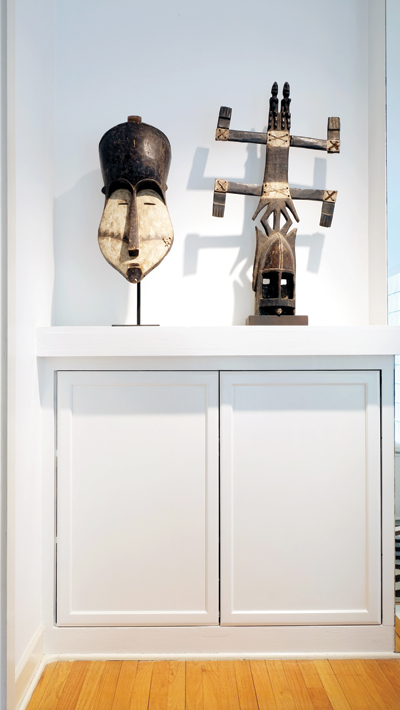 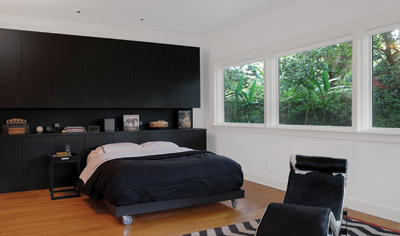 Mhire designed the wall of custom cabinetry, which contains his library of art and architecture books, and placed the platform bed on industrial casters for flexibility. The black and white rug adds a touch of pattern to the minimalist furnishings. 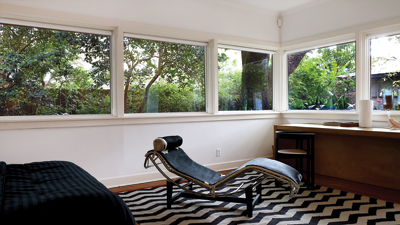 A Le Corbusier leather chaise sits opposite the bed in the master suite. Years of wear left the gears of the home’s original casement windows stripped, so Mhire replaced all 21 windows with custom framed Pella windows. Mhire designed the desk in keeping with the flat planes and simple rectilinear lines of the house. 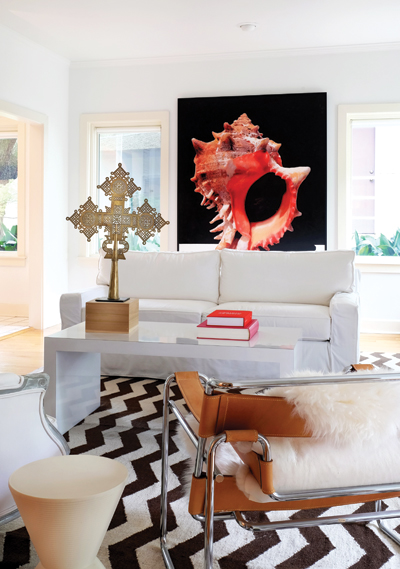 The living room’s neutral black and white underpinnings are punctuated with the vibrant coral of Mhire’s 2014 “Hexaplex Brassica” painting, which hangs behind the sofa. A Philippe Starck Prince Aha stool from Design Within Reach stool sits between an antique French chair and a Wassily chair. The Coptic cross on top of the laminate Parsons-style coffee table is from Ethiopia. Mitchell Gold sofa is from Villa Vici.