When Becky and Kenny Nelkin first visited the Bayou Teche property where the historic LaGonda plantation once stood, they were captivated by the beauty and romance of the southwest Louisiana setting. The Nelkins are both lifelong residents of the area. Kenny and his late father cofounded Candy Fleet, which supplies boats and ships to the offshore oil industry. Located on the lower Atchafalaya River near Morgan City, LaGonda was one of the top sugar-producing plantations in the state during the years preceding the Civil War. The peaceful, 8-acre site once had a grand, double-galleried plantation house with fireplaces in every room, but that house no longer exists. The Nelkins knew however, that the swathe of land along the bayou would be perfect for a home of their own.

The process of planning and building the house from initial architectural drawings to completion took six years. The couple wanted the house to be worthy of the natural surroundings and to stand the test of time. Having seen George Hopkins’ book, “Creating Your Architectural Style,” they contacted the New Orleans-based architect, whose work is rooted in classical architecture.

“We loved everything we saw in his book,” says Becky. “So we called him and met with him.”

The Nelkins invited Hopkins to visit the property numerous times to experience the land firsthand. The challenges were twofold: build a house that maximizes the views and work within the existing framework of the huge live oaks. The result of their meetings was a plan for a long, narrow house that pays homage to Louisiana’s French heritage and exposes most of the rooms to the bayou vista.

“Rather than build or rebuild a Louisiana French-style cottage, the Nelkins opted to build a manor house in the French style,” says Hopkins.

Among the amenities that the Nelkins wanted incorporated into the 9,000-square-foot home were an indoor grill room where Kenny can cook outdoor-style with indoor comfort, a wine room with Old World European ambiance, a large kitchen, a master suite with his and hers master baths, a fully-equipped home gym, a bar and bedroom suites for both of their grown children. The grounds also include a boathouse and a guesthouse, designed by Hopkins.

Interior Designers Connie Seitz and Christine Diggs worked with Becky to furnish the home with a quiet palette of whites, grays and pale blues — chosen to enhance rather than compete with the views — and with a formal, yet comfortable combination of European antiques and contemporary designs.

The Nelkins also wanted to weave some meaningful and indigenous elements into the design. Hand-hewn wood pilings, used to build the original LaGonda plantation and found submerged in the bayou, were milled for the shelves and desk in Kenny’s office.

Wainscoting for the office was created using a pair of 100-year old cypress doors, purchased and stored for many years by Kenny’s grandfather. Louisiana pecky cypress warms the walls of the wine room.

Today the finished house, which has French doors overlooking the water and carefully considered Louisiana touches, is as much a part of the property as the bayou itself.

“We created this house on-site,” says Kenny. “We’d draw and throw away and start over again until we got it right.” 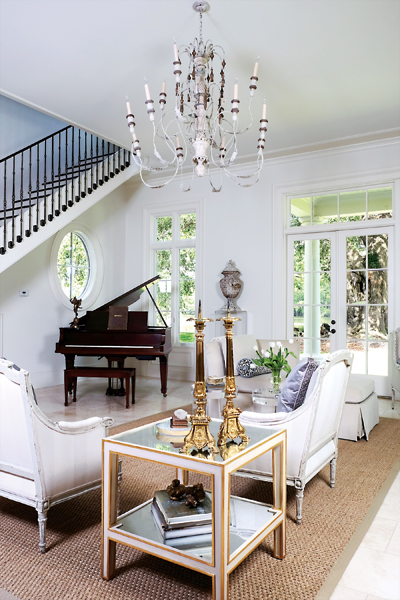 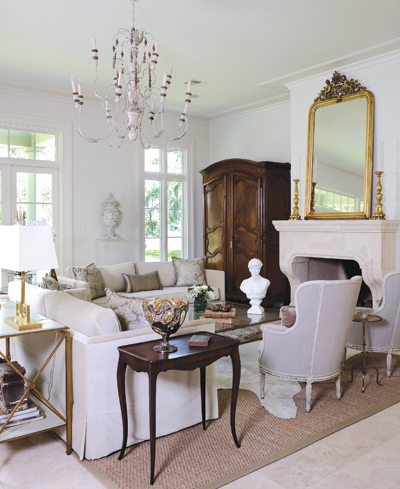 (Left) Connie Seitz and Christine Diggs worked with Becky to choose a palette of whites, pales blues and grays to enhance the bayou views rather than compete with them. Seagrass rugs delineate the great room’s two seating areas. Chandelier, Tara Shaw Maison. The grand piano is a treasured heirloom inherited from Kenny’s aunt. (Right) The great room’s main seating area faces a custom limestone mantel. Above it is a Louis Philippe mirror with putti cartouche from Renaissance Interiors. Chandelier, Tara Shaw Maison. 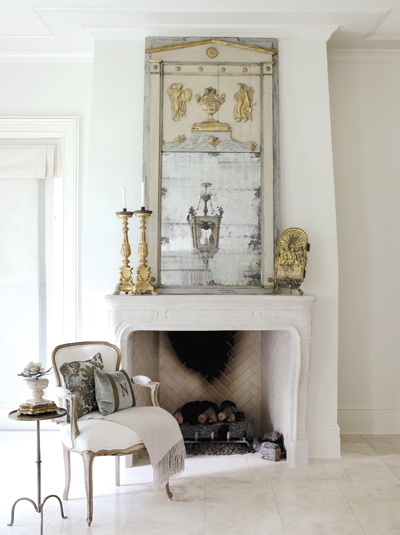 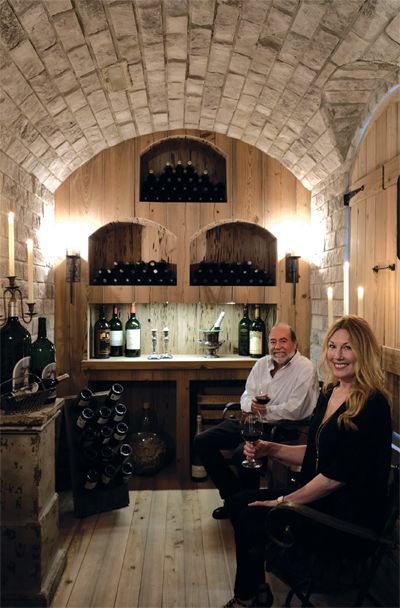 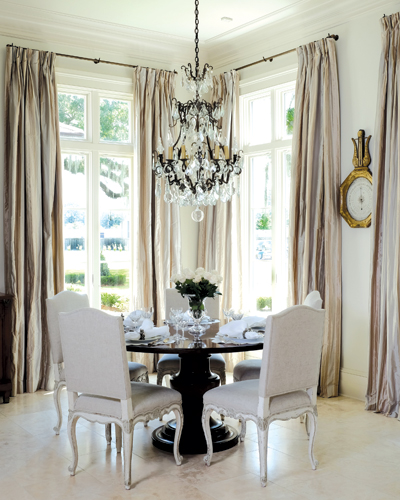 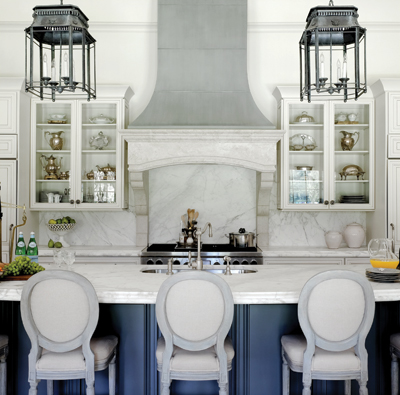 (Left) Only one is pictured, but Becky opted for two small tables in the dining room. “They work beautifully for large gatherings, but you can still have an intimate dinner for two,” she says. (Right) The kitchen’s French-style marble and pewter hood is from Francois & Co.  Large zinc lanterns by Niermann Weeks hang above the island. Counters and backsplash are honed Calacatta Gold marble.