The Rural Life: Raising Kids on the Farm

One morning I found a crumpled sticky note on which our 7-year-old son had scribbled this ardent petition to God or Santa Claus or most likely, me – the parent perceived to be the biggest pushover:

“I wish I had a Gameboy.”
A Gameboy (or X-Box or PlayStation or take your pick) is the one toy Andy desperately wants. It is also the one toy Andy cannot have – not as long as his father and I can withstand his heart-rending pleas, anyway. Like a lot of parents, we’re turned off by the genre’s violence and squirrelly moral messages. But what really bugs us about virtual reality is all the reality little boys are missing when they’ve got their faces pressed against some LCD like suckerfish on aquarium glass. They aren’t outside running and playing in the fresh air and sunshine. They aren’t reading a book or pretending to be pirates. They aren’t throwing a baseball or learning to share with other children. In short, they aren’t developing their minds, bodies and characters – at least not in the old-fashioned ways that a couple of 40-somethings like us understand. 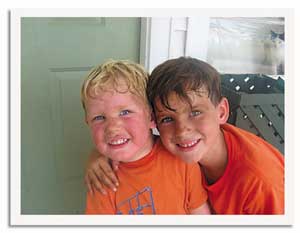 My point, I suppose, is that in some ways, raising kids on a farm in 2008 is no different from raising kids anywhere else. Parents in the country face many of the same dilemmas as moms and dads in the city. If we’d let them, I’m quite confident our little farm boys would spend just as many hours kicking animated ninja butt or blasting digital aliens to Kingdom Come as any kid “Home Alone” in your average subdivision.

Refusing my sweetnatured son his heart’s desire can be fairly agonizing, especially when I’m already feeling guilty because he’s stranded in the boonies with very few playmates. As I’ve pointed out to my husband – the parent most adamantly opposed to video games – the kid didn’t volunteer for this lifestyle. I was one of five sisters raised in the city, primarily the suburbs of Birmingham. Harvey grew up here on the farm but with six other siblings. As children, we rarely lacked for something to do or somebody to do it with.

Still, apart from these few, hopefully insignificant, drawbacks, I’m constantly reminded of the ways in which our sons are luckier than most kids in 2008.

At the ages of 7 and 3, Andy and Matthew can ride their bicycles over a mile or more of gravel farm roads with little supervision or worries about traffic. I figure that if they ever find out how much easier it is to ride on smooth pavement, they could be the next Lance Armstrongs. Since he was 4 or 5, Andy has been zipping through the hay fields on his dirt bike like a pint-sized Evil Knievel. You definitely can’t do that in a neighborhood. Nor can second-graders drive pickups through pastures while their parents toss hay bales into the back. (Yes, I know, when you would sooner let a 7-year-old pilot a half-ton of moving steel than play a few rounds of SuperMario, there must be some pretty scary logic at work.)

From the time they traveled in infant seats, our sons have gazed at their world through the windows of a big green tractor. How many American kids in the 21st century ever get close to a real John Deere, much less get to ride in one any time they want? Then again I also have to wonder how many other American boys force their Spiderman action figures to take time out from saving the world in order to drive toy tractors.

At a moment’s notice, our kids can drop a line into a pond or splash around in the Bogue Chitto River that borders the farm. Even better, they can skip rocks until their arms fall off. You can have your remote-controlled robots and talking storybooks. Show me a shallow river with a pebble-strewn beach and I’ll show you how to keep a little boy entertained until you have to drag him away kicking and screaming (or at least whining and pouting).

(But lest I come across as one of those more parenty-than-thou types, let me be perfectly honest – our children are extremely not unfamiliar with the pleasures of Cartoon Network.)

And just because our sons live in a place most people would rightly imagine being a paradise for boykind, that doesn’t mean they never gripe about being bored. Or that they don’t yearn for life in the fast lane.

Recently our sleepy little town of Franklinton got one of those new, mega-pharmacy chain stores that are popping up everywhere these days. As we watched the construction progress week after week, I thought my children might expire from anticipation. Then, one day we drove by and noticed that the store had finally turned on its flashing, sign. Judging from the hysteria in our backseat you might have concluded that the Easter Bunny had just landed in the parking lot.

Then again there’s a lot to be said for keeping them barefoot and ignorant when it comes to all the retail possibilities “out there.” For example, my sons seem to be under the impression that there is only one Toys“R”Us store in the entire universe – and that it’s located five hours away near their grandparents’ house in Birmingham. I could set them straight. But why?

I remember one conversation a year or two ago when, out of the blue, Andy asked me dreamily, “Mama, when can we go back to that place? You know, where they had the pizza?”

“Sorry, honey. I’m not sure I know what you mean.”

“You know – that place,” he continued, in the same tone he might use when describing Disney World. “Where all the tables were in the middle of a big room! And you could get pizza or another kind of food if you wanted it!”

For a moment, I was stumped. After all, that description could apply to practically every dining establishment we’ve patronized since we had children. Then it dawned on me exactly which thrilling, exotic destination my farm boy was gushing about: the food court. I guess what they say is true. Once they’ve seen the Slidell mall, there’s no keeping ’em down on the farm.

Until then, we’ll do our best to raise them as country boys in an urban world.

Recently we attended an outdoor wedding at friend’s home, set on 90 picturesque acres. After the ceremony the adults partied in a huge metal barn (you know you’ve been living in the country too long when a statement like that sounds perfectly reasonable). Meanwhile a roving pack of boys (including ours) romped in the nearby hay lot, leaping from the top of one huge round bale to another. A few minutes earlier, I found them tearing back and forth – in their good Sunday clothes – through the 30-foot-wide patch of ashes and soot where our friend had burned some old hay. As darkness fell, they poked at a bonfire with sticks, actually igniting a couple of small yet exciting grass fires that had to be extinguished. Later I spied them shouting and running through the field under a dazzling starry sky with three dogs bouncing along behind.

As so often happens in this rural life of ours, it dawned on me that our kids could never enjoy all this country-fried fun if we lived in one of those nice, new neighborhoods teeming with playmates. That night we took our sons home utterly filthy, totally exhausted and wildly happy. And that’s precisely the kind of memories we hope they’ll hold in their hearts long after all those handheld games are forgotten in some landfill.