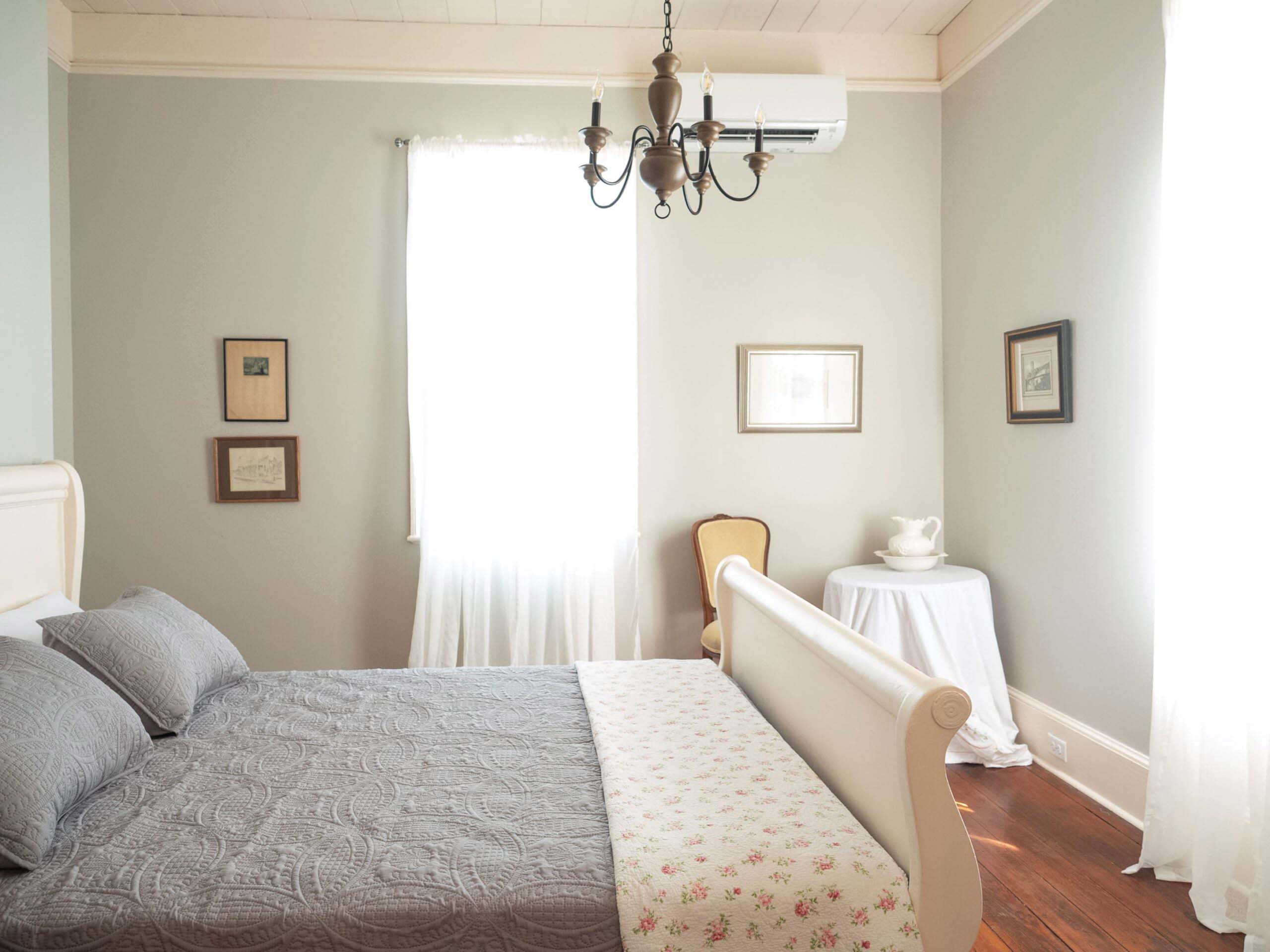 The “Julie” room overlooks the courtyard, garden and pond.

There’s a tremendous amount of attention that goes into restoring a 1796 Louisiana plantation home to be used as a bed and breakfast. At the time of this writing, owners Kenneth Douet and Richard Howes were struggling over three days just to reassemble a massive armoire to open their bilingual Maison Stéphanie by mid-July.

“It’s giving us a fit,” Douet said of the bulky antique. “And this was after we spent two hours putting together a king-sized bed.”

Douet and Howes purchased the three-story home of Martin Milony Duralde, a French Basque native who came to the United States on request of the Spanish government to help develop the city of St. Louis. Duralde married Marie Louise Josephe Perrault of Quebec while in Missouri, then received an assignment from then Louisiana Governor Bernardo de Gálvez. The Frenchman who spoke several languages, including studying the dialects of Louisiana natives, eventually received 1,450 acres along Bayou Teche in a Spanish land grant.

The bayouside Maison Stéphanie lies north of Cecilia at 1862 Bushville Highway in the Cecilia les Alentours Cultural District. The main B&B building offers five guest rooms to visitors, each with its own bathroom and a Mitsubishi air conditioning unit that can be adjusted individually without temperature changes bothering other visitors, Douet said.

There’s also the recently constructed Carriage House with its two bedrooms, where visitors can rent out the entire building with its living room, dining room and kitchenette, or just one half. The additional Acadian house in back provides two full-sized beds, a bathroom with a clawfoot tub and a living-dining room.

Future building plans include a barn and performance facility, another guest cottage and the early 1900s Frederick’s home of Arnaudville that has been dismantled and will be moved to the site, reconstructed and restored.

“Dr. Frederick was from the area,” Douet said. “It will be part of the B&B but will also serve as housing for the French Immersion school, Saint-Luc, located in Arnaudville.”

Maison Stéphanie sits on 20 acres of the original Spanish land grant with Bayou Teche at its back. Guests may enjoy paths down to the water’s edge or prefer to lounge in the accommodation’s three open areas.

The home’s unique history
Douet researched both the house and its aristocratic owner and found that Duralde not only spoke Latin, Greek, Spanish and French, but worked with locals to learn the Chitimacha and Atakapa languages. He also penned correspondence to Thomas Jefferson regarding the finding of fossil bones and to Ben Franklin, relating Louisiana plantation life and reporting on crop and cattle production. The letters to Franklin are housed in the American Philosophical Society’s Philadelphia archives but one of Maison Stéphanie’s master carpenters, who’s from Philadelphia, brought back copies to Douet after a home visit. Douet downloaded the files and will have them printed for guests to peruse.

Duralde had an impressive career in Louisiana, serving as the commandant of the Opelousas Poste from 1795 to 1803 and as a state senator for the Attakapas region. His daughter, Clarisse Duralde, married William C.C. Claiborne, Louisiana’s first American governor.

During his time in America, Duralde became very wealthy. His last will includes a long list of holdings.

“He had an enormous amount of property,” Douet said.

He christened his plantation for the Greek word Stephanos, which means wreath or crown signifying honor and wealth. Because houses are feminine in the French language, Duralde named his home Maison Stéphanie. The bed and breakfast logo contains a Greek wreath.

The property has gone through many owners over the years, including Charles Henri Lastrapes after the death of Duralde, who expanded the land holdings. In 1889, the Huron Planting Company of Canada purchased the home and surrounding land and changed its name.

“Everyone my age knows it as the Huron Plantation,” said Douet, who grew up in St. Martin Parish. “No one knew it as Stéphanie.