Where the Buffalo Roamed

In the heart of the University of Louisiana at Lafayette lies a swamp, complete with alligators, turtles, fish and blooming Louisiana irises. It’s a sight representative of South Louisiana’s swampy terrain.

According to the University of Louisiana at Lafayette website, the school is the only university in the country with a managed wetland on its campus.

The swamp’s origins, however, offer a different view of Louisiana history.

Most people don’t think of the land west of the Atchafalaya as prairie, but southwestern Louisiana originally consisted of large swaths of flat grasslands with an occasional oak chenier, meandering bayou or wetlands laced with bald cypress trees to break the scene. Bison roamed the southwest region, enjoying the wildflowers and tall grasses. The bulls also loved to fight each other, sometimes pawing the dirt so hard that they caused depressions in the earth known as “bull holes.” 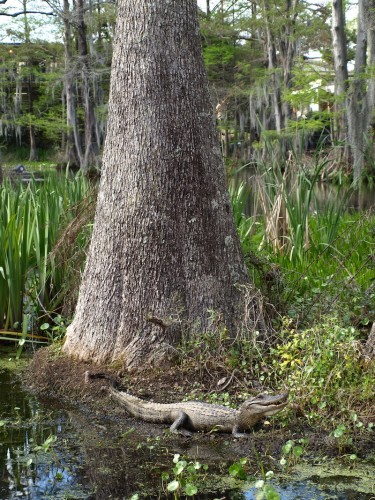 That’s the theory behind the school’s “Cypress Lake,” according to Ira Nelson in an article published in The Daily Advertiser on Oct. 15, 1963. Nelson was a professor in horticulture at the University of Southwestern Louisiana (what the college was called at that time) and believed that “the size and shape of Cypress Lake indicates that it may have been a buffalo hole or wallow.”

In the school’s early early days (then called Southwestern Louisiana Institute, and yes, it’s confusing), a dairy farm was part of the campus and the hole was used as a pig pen and feeding area. SLI President Joel Fletcher, who was part of the agricultural college, moved the dairy farm off campus, including the pigs, after World War I. He beautified the depression and called it “Cypress Grove.” Theatrical performances, dance classes and even commencement exercises occurred in the Grove, since the hollow was an open-air natural theater.

When World War II began, water was added to the depression, to extinguish fires if Lafayette was attacked by air, school officials believed. Water was also used to assist the bald cypress trees growing in the Grove.

“In the early forties,” Fletcher said in the article, “members of the agricultural faculty felt that the water should be placed back (into the depression) as lack of it might prove harmful to the cypress.” 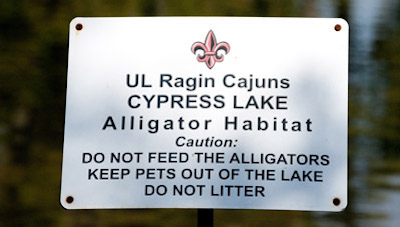 Today, despite the gators living within (and these are small reptiles so no worries here), Cypress Lake is a popular spot in the spring. A boardwalk and walking path circumvent the lake, allowing visitors up-close views of the resident creatures. During Lagniappe Week (when there are pandemics to interfere) canoe races are held in the swamp.

Check out the ULL’s Facebook page on Cypress Lake here.

For more information about the school’s evolution, visit louisiana.edu.