Normally this time of year, downtown Lafayette is bursting with live music and the Downtown Alive concert series, in addition to festivals, Second Saturday ArtWalk and incredible scents of cuisine emanating from popular eateries. Galleries and restaurants are beginning to open, especially with new outdoor and patio seating, but safety measures are still recommended.

Here’s one way to enjoy downtown Lafayette without a crowd.

Stop 1: Start at the oldest resident in town — the St John Oak at 914 St. John St., located next to the Cathedral of St. John the Evangelist Catholic Church. The live oak tree with its arms lovingly supported and a gate to keep people from stepping on its delicate roots is believed to date back 500 years. After honoring this natural wonder, step inside the Dutch Romanesque church, completed in 1916 on the site of the city’s original church, built in 1821. The church property includes an above-ground cemetery with graves dating back to 1820 and the members of the Mouton family — founders of Lafayette — are buried here. The church also offers a museum, which explains the parish’s varied history.

Stop 2: The Lafayette Museum-Alexander Mouton House at 1122 Lafayette St. was the “Sunday house” to Lafayette founder Jean Mouton, a place to rest while he visited town on Sundays for church services. Built around 1800 and one of Lafayette’s oldest houses, the French Colonial home now offers a history of both the Moutons and the city as the Lafayette Museum.

Stop 3: Walk down Vermilion Street toward Jefferson Street, which serves as the main street of downtown Lafayette, and notice the many murals by award-winning mural artist Robert Dafford, one of the most celebrated muralists in American today. There’s the “Flying Violin,” painted in 1988 as the first in a series connecting Lafayette and its Cajun culture to Canada, France and Belgium. A 125-foot-tall painting of a 1950’s-era car with the reflection of local musicians performing in the hub cap graces the side of a parking lot. 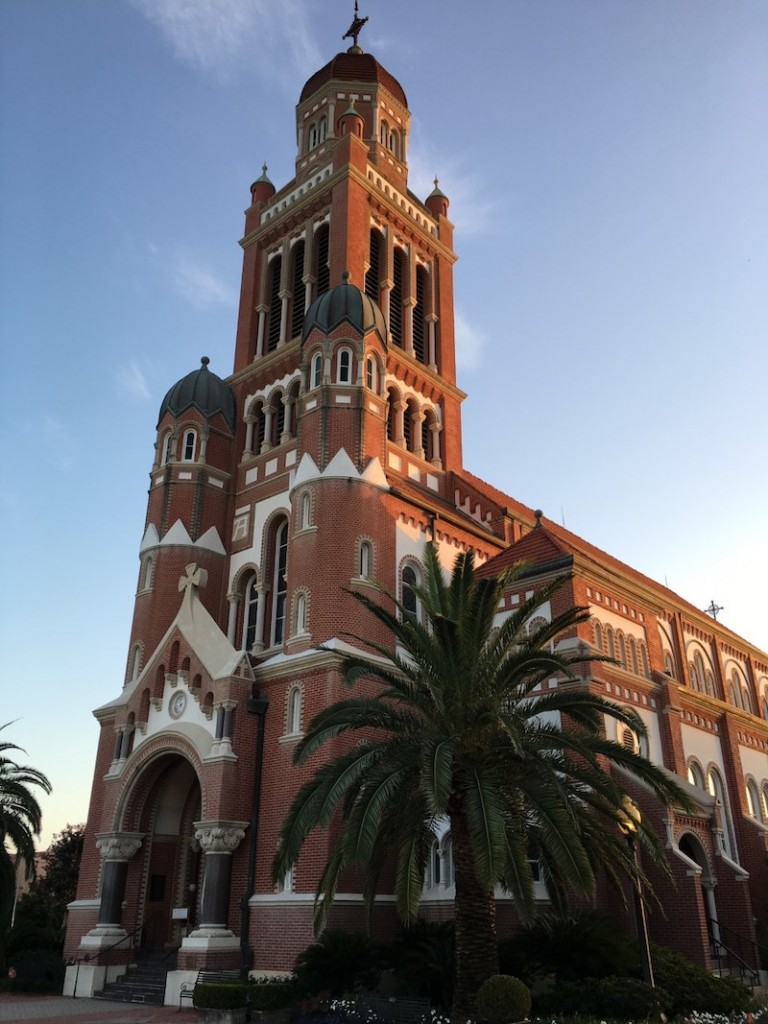 Stop 4: Turn right on to Jefferson Street and you’ll pass a massive Dafford mural exploring the history of Louisiana and Canada, both instrumental in the formation of Acadiana. Its placement faces a large parking area that serves as a fabulous backdrop for one of the many stages of Festival International de Louisiane.

Stop 5: At the corner of West Convent Street and Jefferson, enjoy unique poboys at Pop’s Poboys or gelato at Carpe Diem! Gelato-Espresso Bar while viewing the original Lafayette City Hall across the street. The City Hall building was constructed by the Works Progress Administration in 1939 and used for municipal purposes until 1989. Standing guard out front is Gen. Jean Jacques Alfred Mouton, the first democratic governor of Louisiana and the grandson of the city’s founder. He served in the Civil War — and yes, his statue in Confederate regalia has been a source of argument.

Stop 6: Turn back down Jefferson Street and check out old stores and buildings in their reincarnations. The First National Bank Building at Jefferson and Vermilion streets has been incorporated into the Acadiana Center for the Arts, which includes a gallery space inside the old bank vault. Further down Jefferson, the old Heymann’s Department Store is now the Lafayette Science Museum at 433 Jefferson St. and The Old Guaranty Bank Building at the corner of Jefferson and Congress streets is now the Jefferson Street Pub, another good place to enjoy a meal.

Stop 7: Stand in front of Dwyer’s restaurant at Garfield and Jefferson streets and view Dafford’s “Till All That’s Left is a Post Card,” a vibrant mural depicting the nearby Atchafalaya Basin and the problem of the disappearing wetlands.

Stop 8: Head south on Garfield and turn right on to Polk Street. You’ll pass the International Stage of Festival International and the former Heymann Food Center at 201 E. Congress (corner of Polk), now the Children’s Museum of Acadiana. Straight ahead is Parc San Souci with its splash fountain and a Lafayette sign with the Y missing, urging visitors to become the letter as they pose for photos.

Stop 9: Turn left on East Vermilion St. and pause at the circa-1885 cypress building known as the San Souci Fine Crafts Gallery, which contains wonderful pieces of artwork from artisans of the Louisiana Craft Guild. The building once served as the Lafayette post office, an antique store, an inn, retail shops such as a shoe repair and saddle shop and the San Souci Book Store, operated by Edith Garland Dupre, a former professor of the University of Louisiana-Lafayette and namesake of the college’s library.

Stop 10: It’s a bit of a walk to Bordens 1940 ice cream parlor, the last free-standing Bordens store of its kind in existence located at 1103 Johnston St. But it’s worth it. The retro parlor serves up malts, shakes and banana splits — all the wonderful flavors of summer. (You can read my blog post about Bordens here.) Next door on 215 E. Convent Street is the Blue Moon Saloon and Guest House, both a great live music venue and a hostel. Many musicians from Lafayette’s booming music scene have recorded albums here. 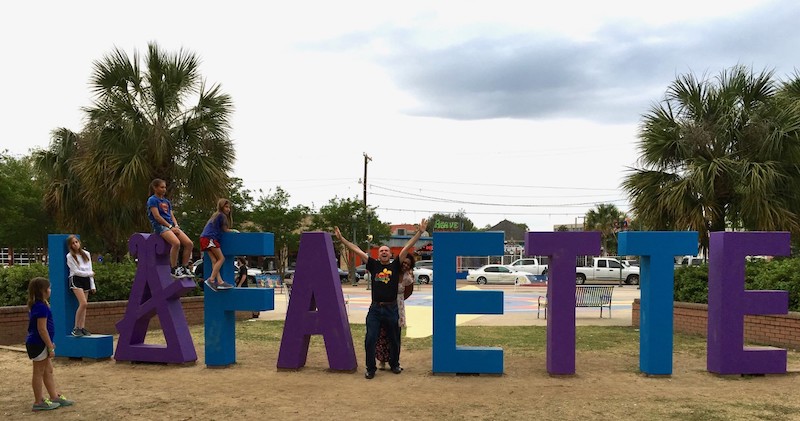 And that’s just the tip of the iceberg. Downtown Lafayette is full of historic buildings and homes, public art and a quirky landmark or two. For more information.