All In The Family

The home of Mimi and Vincent Glorioso on historic Fairfield Avenue in Shreveport exudes the grandeur of a European palace. Upon first stepping into the home, one notices the elaborate hand-painted moulding surrounding the living room ceiling, the intricate handcrafted design on the ceiling and the grand antique chandelier. Prominent architect Emile Weil of New Orleans, who forever left his mark on buildings such as the Strand Theatre in Shreveport and the Saenger in New Orleans, designed the home. Paul Martin Heerwagen, who also worked on the Strand and Saenger, in addition to many other projects, served as interior designer. The home was originally built for Horace H. Bain, owner the largest sheet metal company in the South. Completed in 1927, the mansion was purchased by Charles and Constance Maggio in 1948.

“The Maggios were my grandparents, and I grew up loving the house,” says Vincent, co-owner of Santa Maria Wholesale Produce Company, the family business that was founded as Maggio Produce Company by his grandfather. “They bought the house after only seeing the three front rooms, which probably reminded my grandfather of some of the old homes in Sicily where he emigrated from in 1918 when he was only 15 years old.”

The Maggios continued to live in the home with Sarah, their only daughter, until she married Monty Glorioso. Sarah and Monty were Vincent’s parents, and after their wedding they moved into the house with the Maggios. “I was born while they lived in the house,” Vincent says. “Then in 1961 my parents bought their own home and stopped living with my grandparents. When both my grandfather and father died, my mother moved back into the house. By that time I had finished college and was working in the family business and living on the third floor of the house.

“After a serious flood on Christmas Eve of 1998 – while we were all at Mass – allowed the water to run constantly for hours from a broken hose on a second-floor washing machine, my mother and grandmother decided to move back into the smaller home of my parents and put the historic mansion on the market. They just didn’t feel they were up to undertaking the task of the extensive repairs from the flood.” 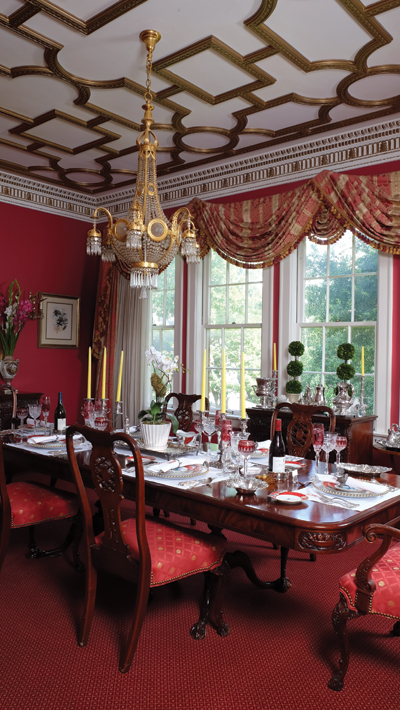 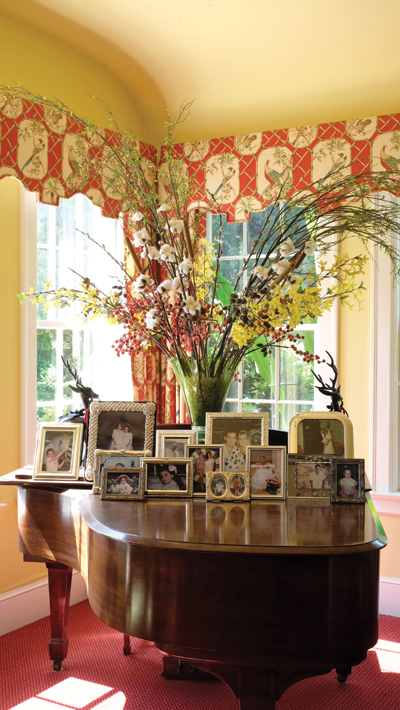 The grand piano in the music room was made in Philadelphia by Lester Piano Company. It was added to the house by Charles and Constance Maggio, Vincent’s grandparents who purchased the house in 1948. 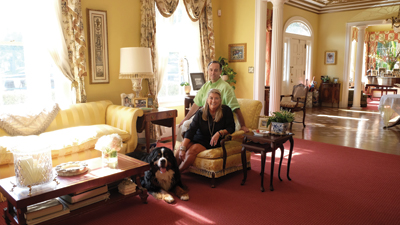 Furnished with a comfortable sectional sofa and a pair of chairs, the room features the same Rosecore crimson wool carpet as the living room. Mimi and Vincent Glorioso with Mowgli, their Bernese Mountain dog, a breed originally from the Bernese Alps in Switzerland.

“I immediately knew that Vincent would never be really happy letting the home be sold to strangers,” Mimi says. “We had two young daughters, Vincent worked long hours, and I knew it would be a daunting task to restore the house, especially the formal rooms on the first floor which incurred the most damage from the flood.” She was right. “Luckily I discovered Earl Sepulvado and Jeff, his son, who had done the renovation painting and gold-leafing on the Strand Theatre. It was our good fortune to hire them to restore the downstairs canvas and plaster ceilings.”

Sepulvado spent months lying on his back on top of scaffolding with a tiny brush gold leafing every inch of plasterwork. “He was a master of his craft,” Mimi says. “Words cannot tell how patient and professional the father-son duo was. They were beyond fabulous.” Heerwagen was a famous designer and artist in his own right. Born in the Kingdom of Bavaria (now a part of Germany) in 1866, he immigrated to the United States after he received his formal education in Berlin. Once settled in the United States, he became well-known for his elaborate plaster work and is credited with doing the Peabody Hotel in Memphis. Antoinette Fiduccia Johnson, did her doctoral dissertation about him at Arkansas State University last year, and writes he was famous for his plaster work that is so ornate that you feel some great European edifice must have been disassembled, brought to the States, and assembled once again by European artisans.

Mimi is credited with the elegant interior design throughout the home. She paid close attention to every room in the home, with a special focus on the formal living, dining and music rooms at the front.

Today the couple has the house of their dreams. “It’s been the perfect home for our family,” Vincent says. “As a bonus, it sits on an acre where we have all kinds of fruit trees.” Mimi agrees and says both of them love the formal areas of the home. “I never cease to admire the truly beautiful gold leaf and hand-carved moldings and plasterwork in the living room. My favorite time of the day to enjoy the room is in the morning when the sun is streaming through the windows. We have never regretted continuing to keep the home in the family.” 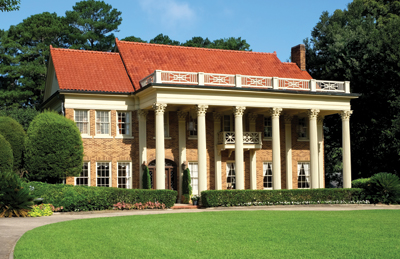 Completed in 1927, the historic Shreveport home was designed by noted New Orleans architect Emile Weil, who also designed the Strand Theatre in Shreveport and the Saenger Theatre in New Orleans, among many other storied projects. 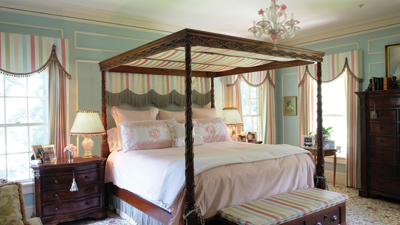 The master bedroom is illuminated by a chandelier from Murano, Italy. The poster bed is dressed in custom linens and monogrammed pillows. Drapes are silk and linen file and the Brintons Axminster wood carpet in the Magnolia Florence pattern is from England.