“Lovely the moonlight was as it glanced and gleamed on the water,
Gleamed on the columns of cypress and cedar sustaining the arches,
Down through whose broken vaults it fell as through chinks in a ruin.
Dreamlike, and indistinct, and strange were all things around them;
And o’er their spirits there came a felling of wonder and sadness.” 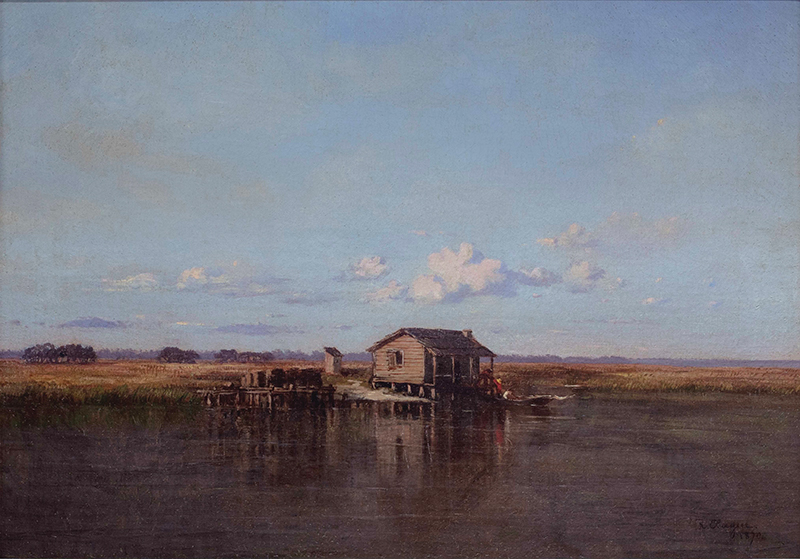 Like Longfellow’s exiled, star-crossed and forlorn Acadian lovers Evangeline and Gabriel, Louisiana’s dark, watery cypress forests lured generations of landscape painters who created work that rivaled many of the best known landscape painters in the United States and Europe.

Though cultural observers in other parts of the country have tended to overlook the historical importance of 19th century landscaping painting in Louisiana, the New Orleans Museum of Art, or NOMA, sets the record straight in the groundbreaking new show “Inventing Acadia: Painting and Place in Louisiana” that runs Nov. 16 to Jan. 26.

“Inventing Acadia,” organized by NOMA’s Curator of Modern and Contemporary Art Katie Pfohl, takes viewers on a journey through the unsettling yet poetic and romanticized beauty of Louisiana’s 19th century landscape through the eyes and imaginations of its artists. Equally important, the exhibit places these Louisiana landscape paintings, for the first time, in a broader national and international context. It claims their rightful place in the history of American art.

Pfohl and the narrative accompanying the show describe landscape painting in Louisiana during the 19th century as a “merger of artistic influences from across the globe.” Those artists then working here created and exported “a new vision for American landscape art” that envisioned South Louisiana’s “enigmatic natural scenery both as a paradise shrouded in the ‘glamour of romance’ and as a place profoundly marked by the history of colonialism and the forced migrations of slavery.”

By the later half of the 1800s, this “enigmatic natural scenery” had become a dominant theme among local and expatriate artists who came to Louisiana from the Caribbean, Mexico, Europe and Northeastern states to explore the state’s mythical and mystical land and Evangeline’s Acadia. During those years, a new school of art emerged in Louisiana, the so-called “Bayou School,” influenced by the transcendentalism of the Hudson River School of art, especially the work of Thomas Cole, Frederic Edwin Church, Asher Durand, George Inness and the realism of the French Barbizon painters who dominated the art world in Louisiana in the latter half of the 1800s.

Featured in the show are paintings by the most influential artists working in Louisiana from the 1830s to about 1900. The stellar line up includes, among others, Joseph Rusling Meeker, Alfred Boisseau, Théodore Rousseau, William Henry Buck, Marshall Smith, and Richard Clague, regarded as the father of the Bayou School. Those artists who came to Louisiana from Europe and northern states had to respond to an unfamiliar landscape. Instead of mountains and rocky seashores, they found in Louisiana a shifting landscape of deep cypress swamps enveloped in hot, humid air that created warm and misty sunlight that seemingly glowed at the tips of the their brushes.

Pfohl, who holds a doctorate in art history from Harvard and joined NOMA’s staff in 2016, also traces changing artistic interpretations of landscape painting as Bayou School artists moved from the Civil War years to last decades of the century. Clague, for example, painted what he saw, such as in his painting “Back of Algiers,” which depicts shacks and poverty in a backwater neighborhood of New Orleans. His approach, she says, “was startling for paintings in the United States at that time.” As the decades passed, however, Louisiana artists such as Meeker tended to paint more romantic and picturesque scenes and luminous visions of paradise.

The exhibit also notes contributions the 1884 New Orleans World’s Industrial and Cotton Centennial Exposition made to landscape painting in Louisiana with the introduction of African-American, Mexican and Haitian paintings. According to Pfohl, this was the nation’s first exhibition featuring African-American artists.

Apparently, landscape artists working in New Orleans during these years were highly regarded in Europe and often showed their work in major Paris salons side by side with renowned French painters such as Jean-Baptiste-Camille Corot, Charles-François Daubigny and Théodore Rousseau.

The last half of the 19th century is often described as a golden age of landscape painting in Louisiana and, indeed, the United States. Louisiana paintings, however, differed “in style and subject matter,” says Roger Ogden, a New Orleans art collector and founder of the Ogden Museum of Southern Art. Ogden and the museum loaned almost a dozen paintings to the exhibit.

“Louisiana landscape painting of the 19th century,” says Ogden, “has its own identity, perhaps reflecting the humid quality of light in Louisiana.”

Pfohl, however, doesn’t think of art and paintings in this show in comparative terms of historical movements. They are, she says, “part of an evolving conversation” about the ecology, art and history.

“These are beautiful paintings but at the same time they tell a complicated story,” she says. “In part, the show is about lands under threat, a show about paintings under threat, destroyed or lost. It’s important for the museum to tell that story.”

In telling that story, Pfohl spent the last three years examining old exhibition catalogs, visiting private and museum collections in Louisiana, across the United States and in France. In the end, she selected approximately 60 paintings that best demonstrate the artistic influences and cultural connections between Louisiana, Europe, the Caribbean and Northeastern United States. A scholarly catalog published by Yale University Press accompanies the exhibition.

Returning to Longfellow, “Inventing Acadia” captures the beauty and romance of Evangeline’s refuge in Louisiana, the new Acadia, as well as the Acadia of the imagination and the artist’s brush. For as the poet wrote, “They who dwell there have named it the Eden of Louisiana!” 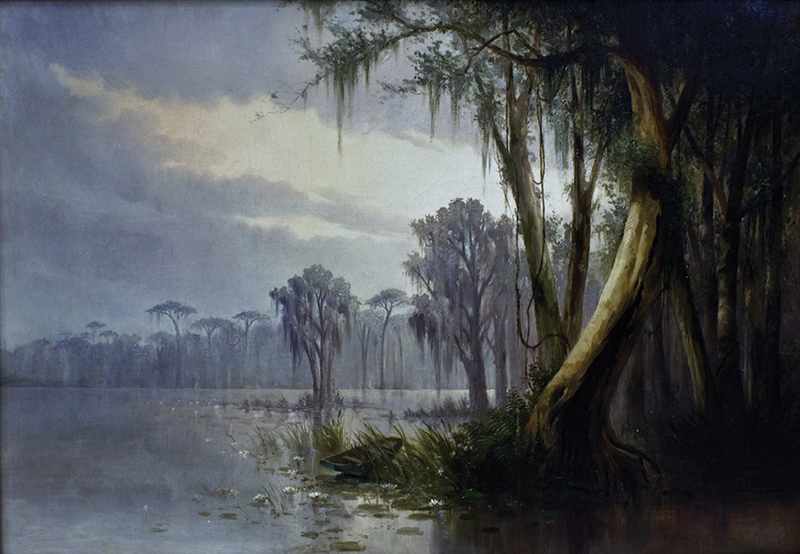 “After a Storm – Lake Maurepas,” By Joseph Rusling Meeker, 1888, Gift of the Phi Gamma Chapter of the Chi Omega Society, Louisiana State University Museum of Art 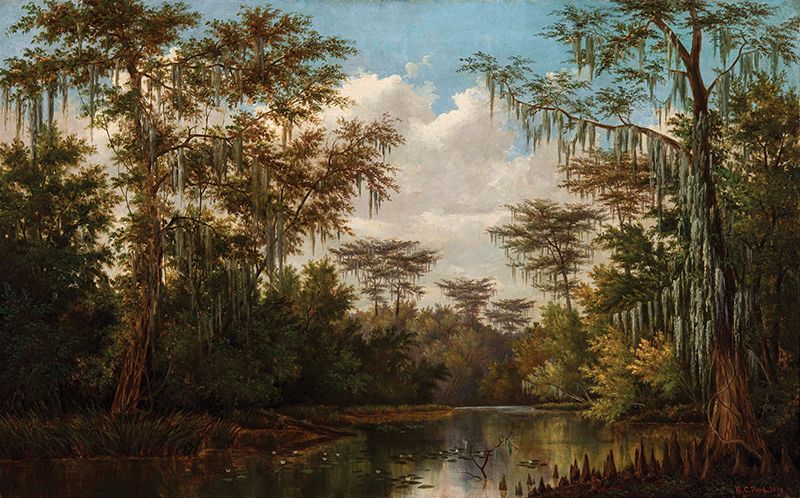 Masur Museum of Art. “Synthesis: Art and Nature in the Post-Digital Age.” Features 26 multimedia artists worldwide who look beyond the digital age where boundaries between nature and technology blur. masurmuseum.org

Ogden Museum of Southern Art. “Memory Is a Strange Bell: The Art of William Christenberry.” The exhibition explores the importance of poetry to the development of Christenberry’s vision. ogdenmuseum.org 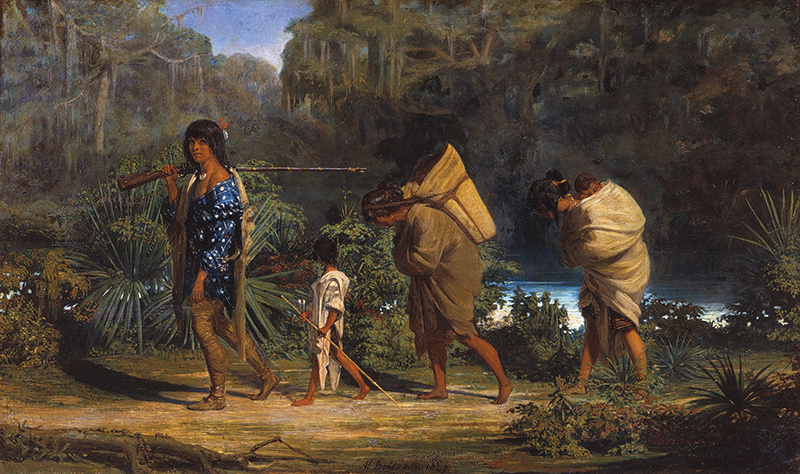 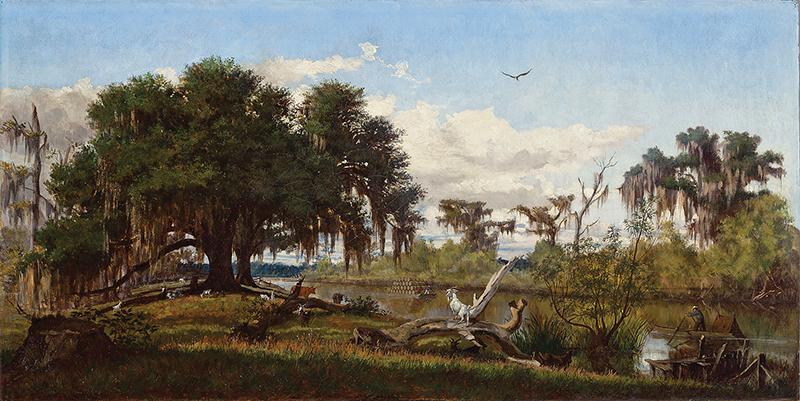