On an unlikely spot in an older section of Hammond, Louisiana, sits one man’s tribute to the African-American experience. Dr. Charles Smith’s African-American Heritage Museum and Black Veterans Archive is unlike any other museum. It is a personal and spiritual mission directed by God, as he says, to tell the story of black America and to save the nation.

In a statue garden and sculpted crypt-like museum building on the corner of East Louisiana Avenue and Walnut Street, hundreds of lifeless statues and dark faces stare out to the street as if waiting to tell their stories to visitors. Dr. Smith, who created each piece by hand with concrete, mortar, paint and found objects, has riveting tales to tell.

With the driving voice, cadence and passion of a preacher witnessing to his congregation, the 78-year-old self-taught artist, Vietnam vet, social worker, educator and spreader of the Gospel pointed to various statues across the garden. One titled “The Dream is Dead,” depicts three young African-American boys raising a weather shredded American flag. The visuals are subtle, the message isn’t.

“Dr. King’s dream for America is dead,” he says, staring at the flag. “We failed you.”

With that said, he strolled over to a large group of figures titled “A Testimony to Maya Angelou.” Six nude African female figures, heads shaved, are bound in the chains of slavery for the Middle Passage. Others represent people killed in the Civil Rights movement, victims of Hurricane Katrina, African-Americans and their contributions to American culture, and, sadly, one for a friend killed in Vietnam.

Smith’s art is raw and comes from the heart and soul unencumbered or influenced by formal training or artistic trends. It is unfiltered expression in its purest art form that rises from the shadows, tears, joys and collective memories of a people. His purpose is to preserve and pass on those stories to African-American children to help them “find their greatness in God and in their history.” And that’s where his museum comes in.

“Without a museum to tell your history,” Smith says, “you are like a piece of paper blowing down the road on a windy day without any direction. You’ve got to have a museum.”

Smith’s journey to Hammond began in New Orleans where he was born in 1940. It took a tragic turn in the early 1950s with the murder of his father in what Smith says was a hate crime. His body was found in the Mississippi River near the docks. No one was arrested. Soon after, Smith’s mother moved to Chicago with her three children. Another seminal moment came in 1955 when his mother took him to the funeral of Emmett Till, where he saw lying in an open coffin the body of the 14-year-old African-American boy murdered in Mississippi. The sight made a lasting impression.

Then came Vietnam, the draft board and a two-year hitch in the Marines where he fought in horrific battles at Khe Sanh, Hue and in the Tet Offensive where he saw bloody bodies covering the battlefield. Only 23 men, he says, were able to walk to the evacuating helicopter. During the war, Smith was wounded, exposed to Agent Orange, and suffered post-traumatic stress and health disorders that continue to affect him. In 1968, he received an honorable discharge and a Purple Heart.

After the war, Smith returned to Chicago and in 1981 took a job at the Illinois State Employment Service to counsel veterans. The department later transferred him to Aurora, Illinois, where he attended the Virgil L. Black Christian Academy to learn how to minister to prison inmates, drug addicts, prostitutes and veterans. While in Aurora, Smith also created his first African-American Museum sculpture garden, which he returns to several times a year, and — at the suggestion of an art professor — added “doctor” to his name. It is a title, he says, that comes not from a university but from “God, life and experiences.”

Dr. Smith’s story continues in Hammond where he and his wife Mary settled in 2005 after months of traveling back and forth from Aurora and New Orleans to visit his mother who had returned to the city in 1980 and has Alzheimer’s. On one trip, he stopped in Hammond to buy gas and while there he decided to search for local African-American history sites. After asking around town and finding nothing, he came upon a historical marker for the city’s founder, Peter Hammond. The marker describes the nearby gravesites of Hammond, his wife, three daughters and “a favorite slave boy.”

Incensed that the little boy’s name was not on the tombstone, Smith remained in Hammond for several days trying to identify the child. Nothing. He decided to move to Hammond and work with the local African-American community to start a museum. In the end, he went out on his own to create his own museum that draws several hundred visitors a year, including school children.

In 2001 the Kohler Foundation purchased over 600 of his works and donated them to 19 organizations and major museums, ranging from the Houston Museum of Fine Arts to the John Michael Kohler Arts Center in Sheboygan, Wisconsin. In addition, several of his artworks are now touring Europe in a major group show sponsored by the Chicago-based Center for Intuitive and Outsider Art.

In his art, Dr. Smith has found peace from the murder of his father, Emmett Till, Dr. King and the brutality of Vietnam. Faith and God, he says, are the driving forces in his art. In 1994 Emmett Till’s mother, Mamie Till-Mobley, visited Smith’s museum in Aurora and in a letter praised his work, saying he was “divinely inspired.” Smith agrees.

“God gave it to me,” he says. “I had all this hate back in the 1950s and 60s and God washed it away. The only way to overcome hate is through love. I asked God for a weapon to work with. The weapon had to be non-violent and socially acceptable and be able to cross cultural lines. God showed me art. He said art is the most powerful weapon in the world. The Lord’s spirit guides me, and the next thing I know I am doing something. The check may be in my name, but it was God who did it.”

He glanced across the garden.

“By the grace of God,” he says, “I continue the fight to save America.” 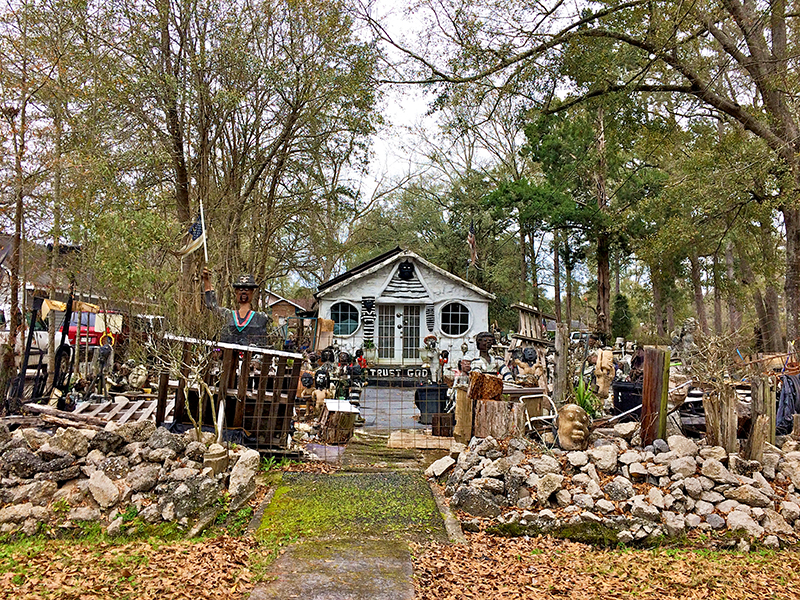 “A Monument to Maya Angelou” 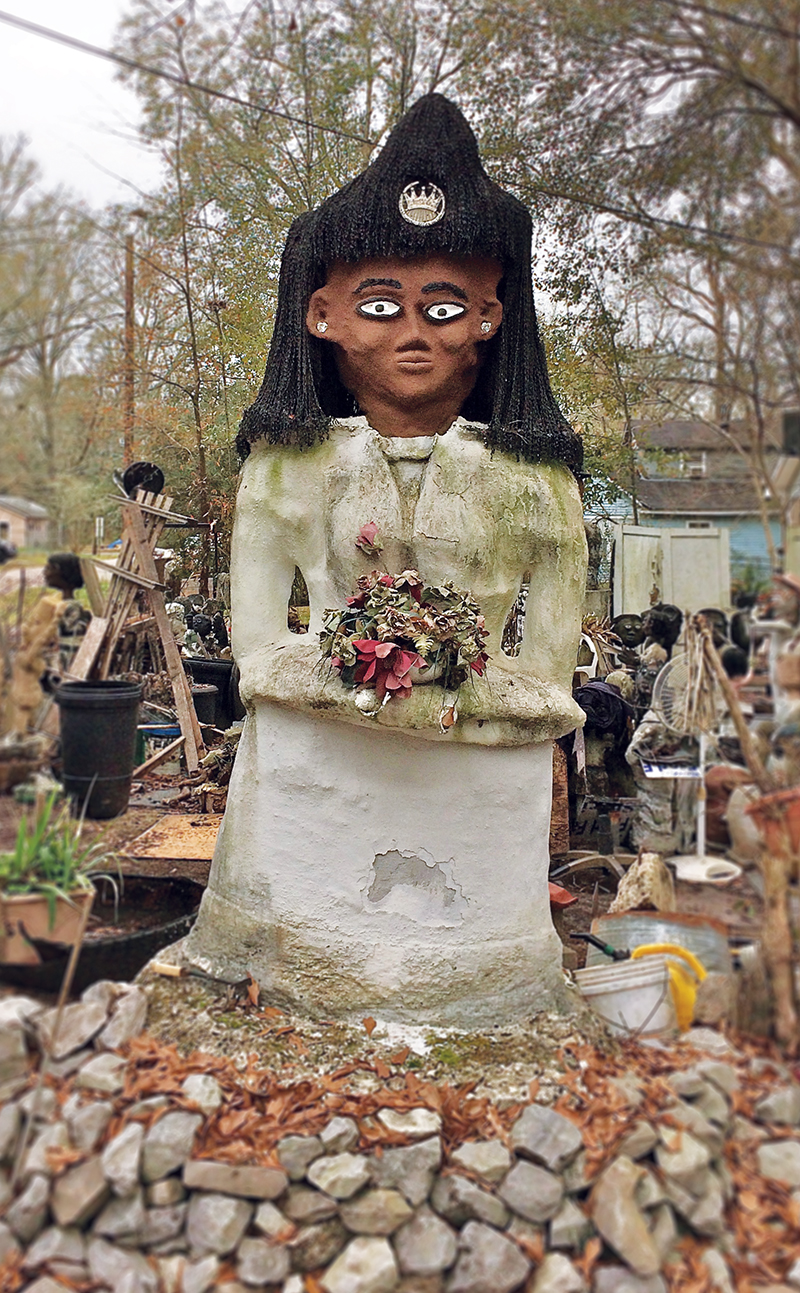 “The Three Marys — Mary, My wife; Mary, My Mother; and Mary, the Mother of Jesus” 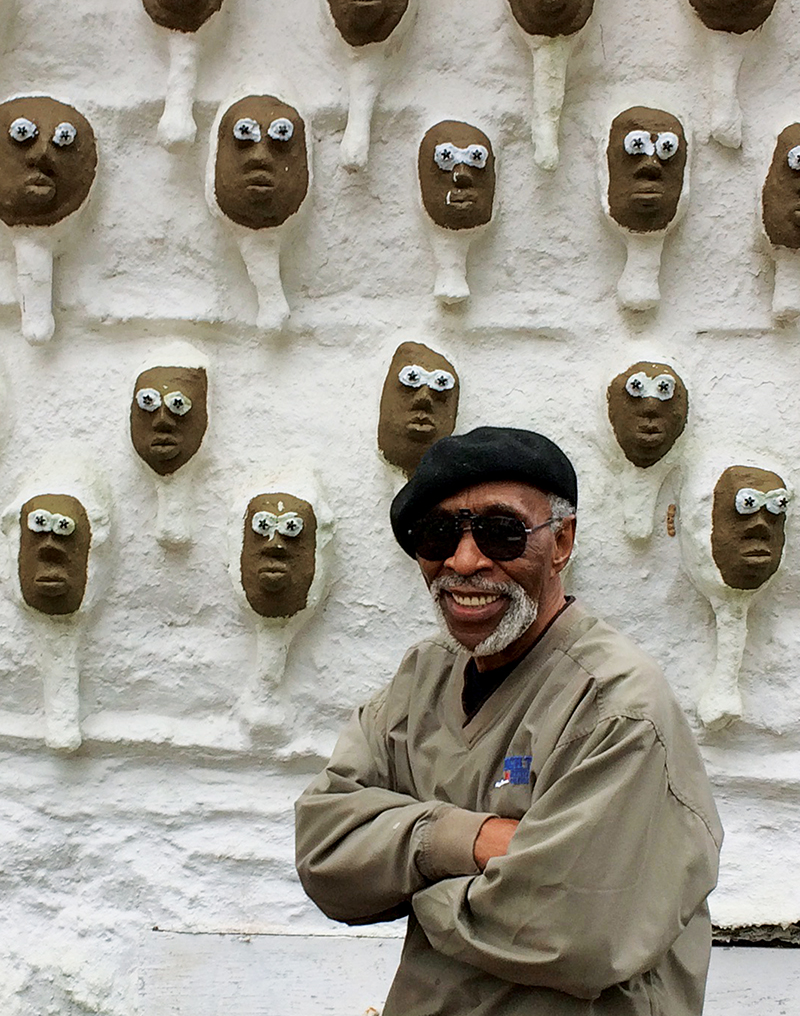 Dr. Charles Smith and his “Monument to Hurricane Katrina”

New Orleans Museum of Art. “You Are Here: A Brief History of Photography and Place.” Exhibition explores relationship between photography and place. noma.org

Masur Museum. “Our Story: Over 50 Years of Collecting.” Exhibition celebrates the history of the Masur Museum.  masurmuseum.org