WHAT’S HOT
Roll out the barrels. Hannah Pittman, 12-year-old daughter of Matt and Jane Pittman of Bogalusa, recently won the title of 2007 National Barrel Horse Association 2-D Youth World Champion at the competition in Jackson, Miss. Pittman and her gelding, Rocks on Fire, had the winning time of 15.440 seconds. Her prizes included the use of a 4-Star horse trailer, champion belt buckle, saddle and jacket, tack, Tony Lama boots and cash. 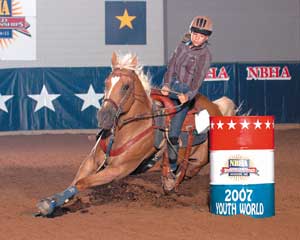 Holey in one? Darrel Perrin, Dwayne Burch and Dr. Bill Wheat introduced the game of Holey Board to Tangipahoa some 25 years ago and Perrin this year used his expertise to win the singles and, with son Brandon, the doubles Holey Board tournaments held at Ponchatoula’s Kiwanis Park. Perrin explains the game: “You give each player three large washers and they try to throw them in the holes in the boards about three feet in front of you.” Each hole is worth one, two or four points. The player tries to get enough washers in the holes to equal 21, he says. As far as Perrin knows, the game originated in Florida.

Bridging the gap. Loreauville High School industrial arts students in Danny Blakely’s class had a challenge: “to build a bridge that was lightweight but able to support a tremendous amount of weight,” Blakely says. “It took the students about three weeks to construct their bridges and about four weeks to design and draft their bridges.” Students measured the bridge’s weight and subjected it to pressure from a hydraulic pump. Paul Knatt, a senior, won this year’s competition with a bridge weighing of 1.65 ounces and able to support 72 pounds. “This is how new things are invented, by people thinking differently,” Blakely notes.

Express yourself. “It’s six lanes. It’s an expressway. But you can’t get on it,” says Bruce Richards, project manager for NY Associates, an architecture and engineering firm, says of the Earhart Expressway, which was built in stages from the late 1970s to the mid-1980s from New Orleans to Harahan. Richards has presented the Department of Transportation and Development an environmental assessment for a new $48.8 million interchange for Earhart and Causeway Boulevard. “Other than the construction of the new Huey P. Long Bridge, this is probably one of the most important projects we can move forward with,” says Jefferson Parish President Aaron Broussard.

Go Army! The communities of Leesville and Fort Polk have been selected by the Department of the Army and the National Trust for Historic Preservation Main Street Center in Washington D.C., to be a part of the Army-Community Heritage Program, in which the Army works with the local community around an installation to improve the capability of the downtown historic business district. Additionally, the program evaluates the potential for improved heritage and eco-tourism attractions that will benefit both the Army and the community.

Generating excitement. The University of Louisiana at Lafayette’s College of Engineering has a new $1 million, 900-kilowatt turbine generator. “Very few colleges have these, especially a brand spanking new one,” says ULL Dean of Engineering Mark Zappi. The generator will be integrated into many facets of the engineering program, from serving as a test engine for alternative fuel research to providing a study tool for developing more efficient power systems. ULL was chosen for the donation out of several major universities across the U.S.

Boo behind bars? Members of Louisiana Spirits, a volunteer paranormal investigative team, spent a night in the Old Gothic Jail in DeRidder hoping for signs of the spirits of past prisoners, particularly, Joe Genna and Milton Brasseaux, who were hanged on March 9, 1928, from makeshift gallows above the jail’s spiral staircase. Brad Duplechien, lead investigator of the group, says the group was sitting on the jail’s iron stairwell when something eerie happened. “We asked that if someone was there – prove it. We heard what sounded like metal hit the bar with a ping sound,” he says. Louisiana Spirits has done similar investigations of buildings throughout the state. Learn more at their Web site, www.laspirits.com.

QUOTABLE
“The best time here is just before dawn, when the stars can still be seen in the sky, even as the night raises her dark skirt to make way for the light, when the birds are first waking up and the splashing in the bayou becomes more pronounced.”
“Steinbeck of the Swamp Battles Snake,” John de Santis,
Thibodaux Daily Comet