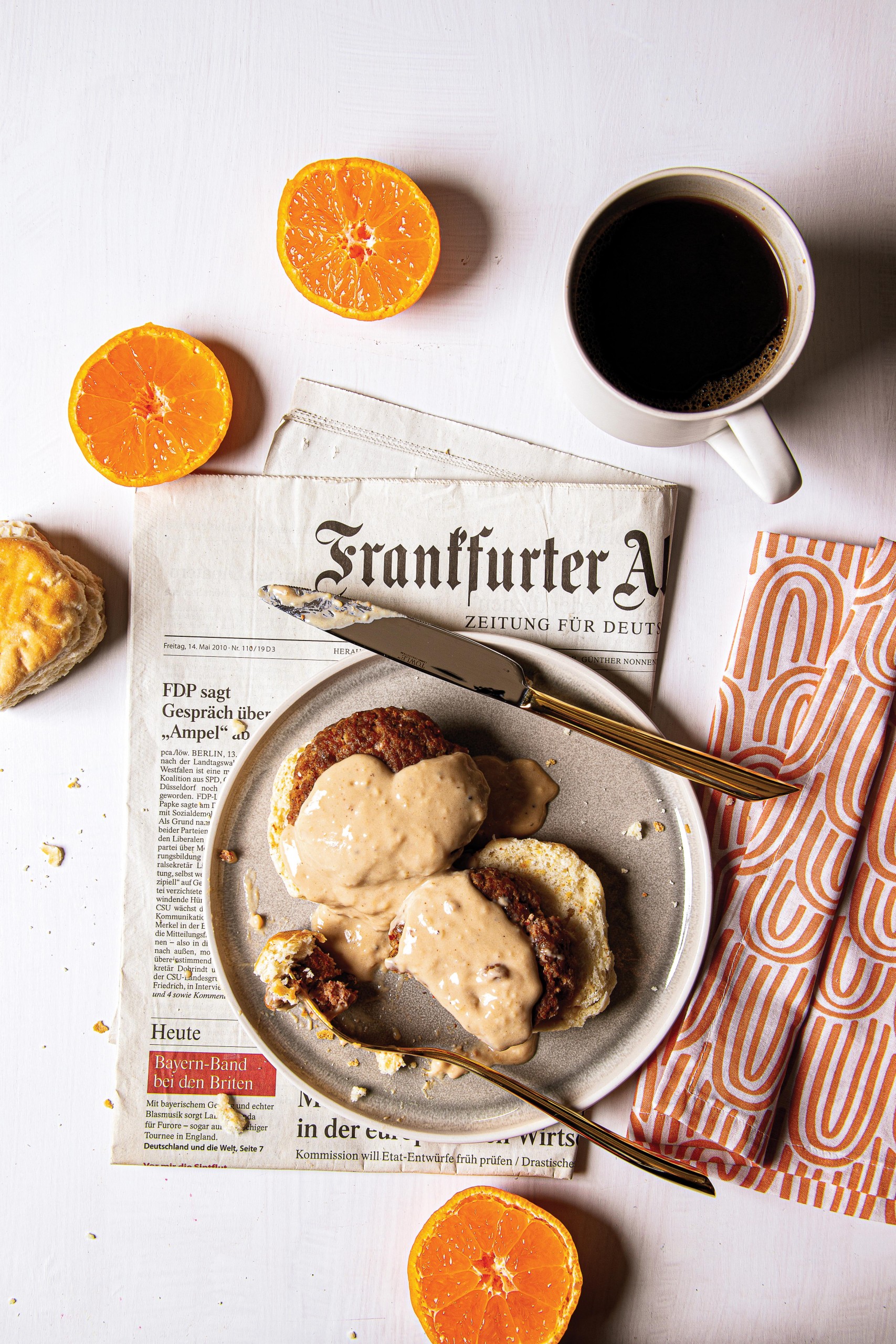 TIP If you don’t have buttermilk on hand, substitute equal parts plain yogurt and milk.

A favorite dish that is enjoyed all across the South. In Louisiana, it is more common in the northern part of the state than in Cajun and Creole country.

Place flour in mixing bowl; cut butter into small pieces and add to bowl, along with lard or shortening. Using a pastry cutter or two knives, cut fats into flour until mixture resembles coarse cornmeal. Add buttermilk and mix with a fork just until dough forms. Turn out onto a lightly floured surface, knead a few times and roll out dough to a thickness of ½ inch. Using a floured 3-inch cutter, cut out biscuits and place on a heavy, ungreased baking sheet. Bake in preheated oven until tops are lightly browned, about 10-12 minutes. Makes 6-8 biscuits.

Measure pan drippings and add vegetable oil, if needed, to yield ¼ cup. Return to skillet and sprinkle with flour. Stir or whisk to incorporate flour and cook until lightly browned, scraping up any brown bits that have adhered to the pan. Add 2 cups milk and stir or whisk to incorporate. Cook until gravy is thickened, while stirring, adding additional milk, if necessary. Season to taste with salt and pepper.

To serve
Split biscuits and place 2 halves on each serving plate. Place sausages on biscuits and cover with country gravy. Makes 4 servings, with additional biscuits as lagniappe. 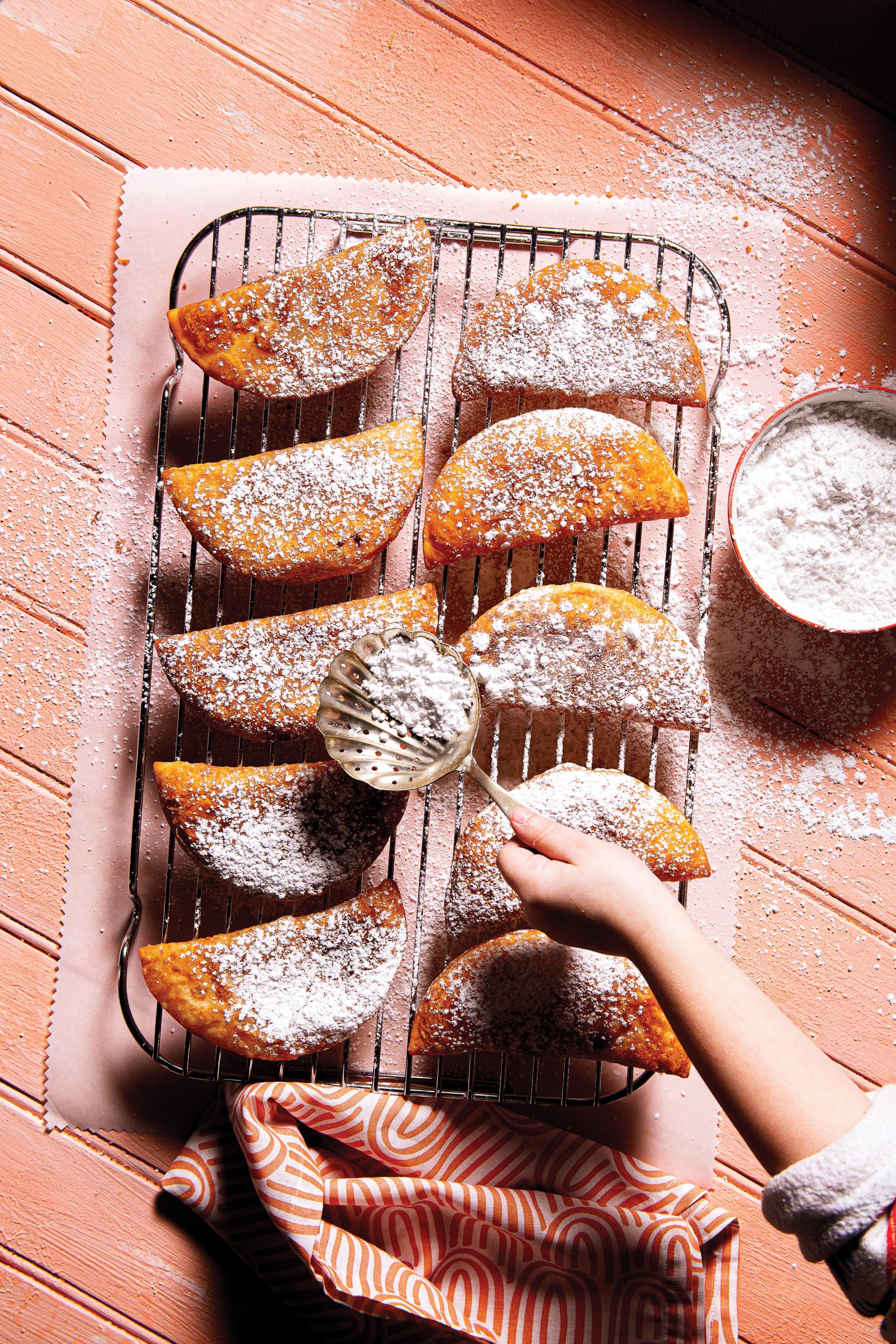 TIP Clarified butter is butter that has been melted and separated from its water and milk solids so that it can be used for frying or sautéing without burning.

Combine flour and sugar in a mixing bowl. Cut butter into small pieces and add to bowl, along with lard or shortening. Using a pastry cutter or two knives, cut fats into flour until mixture resembles coarse cornmeal. Add milk and combine quickly with a rubber spatula. Sprinkle counter with a generous amount of flour. Turn dough out onto floured surface and knead a few times with floured hands. Dough should be a little stiffer than for biscuits. Roll dough out to a thickness of about ⅛ inch, sprinkling dough with additional flour, as needed, to prevent sticking. Using a floured 3½- or 4-inch biscuit cutter, cut rounds of dough. Piece together remaining dough, roll out and cut more rounds. You should have 12 or more rounds of dough.

To assemble: Line a sheet pan or cookie sheet with wax paper and sprinkle with flour. Using a small spoon, place a mound of apricot jam in the center of a round of dough. Moisten the bottom edge of dough with water, fold dough over to make a half-moon shape, and crimp to seal with your fingers. Transfer to floured wax paper. Repeat with remaining rounds of dough.

To cook: Add clarified butter (or equal parts whole butter and vegetable oil) to a depth of about ¼-inch in a skillet and heat. When fat is sizzling, slide pies into skillet, being careful not to overcrowd. Fry on one side until browned, turn with a spatula, and brown the other side. Transfer to a tray lined with paper towels to drain. Repeat, adding more clarified butter (or butter and oil) to skillet, as needed, until all the pies are cooked. Arrange pies on a platter. Put powdered sugar in a fine mesh strainer or sifter and generously coat the pies. Makes 12 or more pies. 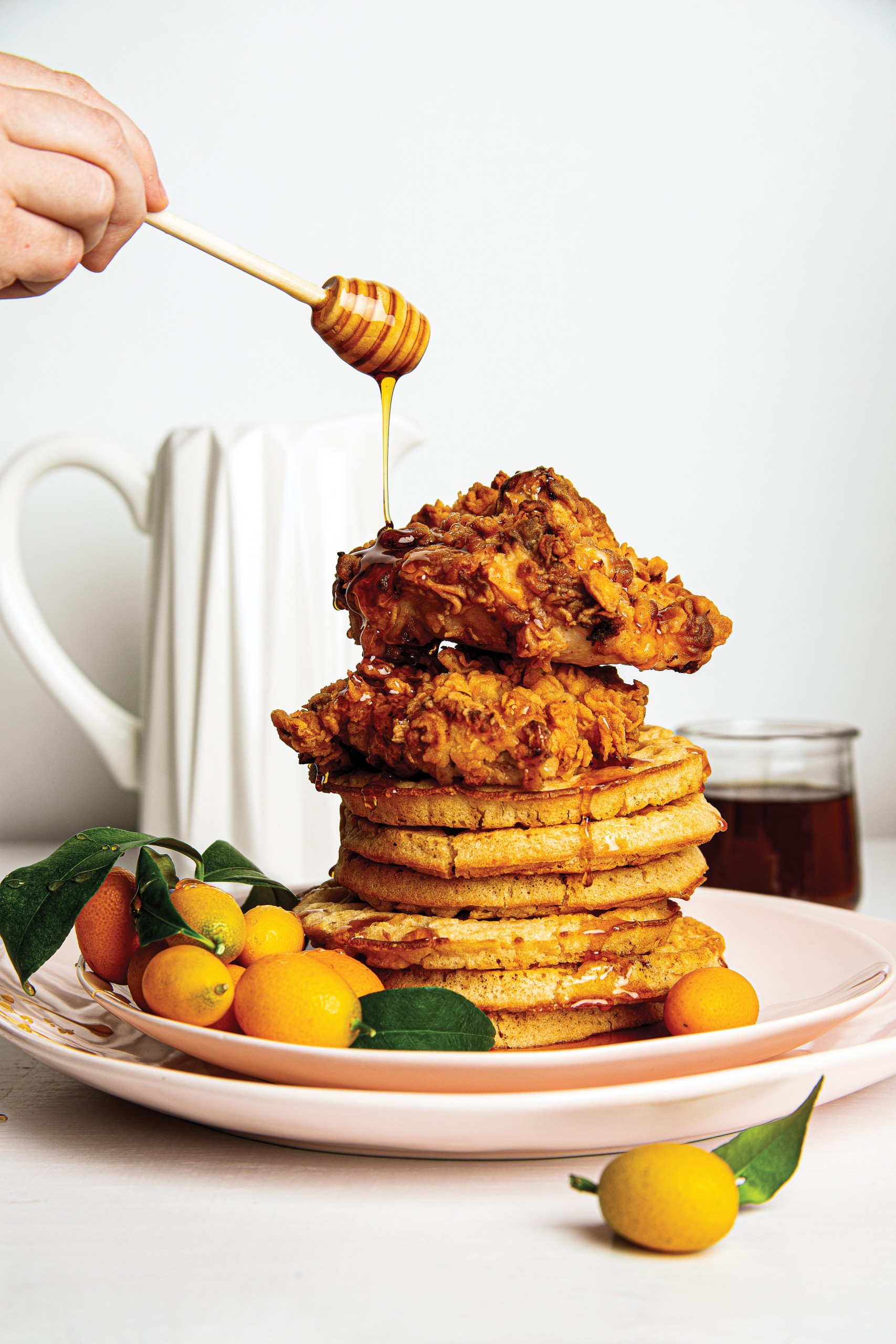 There are two types of southern fried chicken — pan-fried and deep-fried. I prefer the former, but I’ve never been able to master the technique. Out of frustration, I developed this recipe, which approximates our grandmothers’ old-fashioned, pan-fried chicken. It’s not the genuine article, but it’s closer than deep-fried chicken.

Combine buttermilk, salt, peppers and hot sauce in a bowl or pan. Add chicken, turn to coat and marinate for a few hours or overnight, turning chicken occasionally.
Preheat oil in deep fryer or pot to 375 F. Preheat oven to 350 F. Remove chicken from marinade, dredge in flour, and fry until golden brown, about 5-8 minutes. Drain on paper towels, then place chicken on a rack set on a rimmed baking sheet. Bake until dark brown and cooked through, about 25 minutes. Keep chicken warm in a 175-degree oven while making waffles.

Preheat waffle iron. In a medium bowl, combine flour, baking powder, sugar and salt; whisk to combine. Mix egg yolks with milk and stir into dry ingredients. Add melted butter and stir to combine. Beat egg whites until stiff. Fold half of whipped egg whites into batter, then fold in the remaining egg whites. Ladle a fourth of the batter onto hot waffle iron and bake until brown and crisp. Keep waffles warm on a rack set on a rimmed baking sheet in oven until all are ready. Makes 4 waffles. 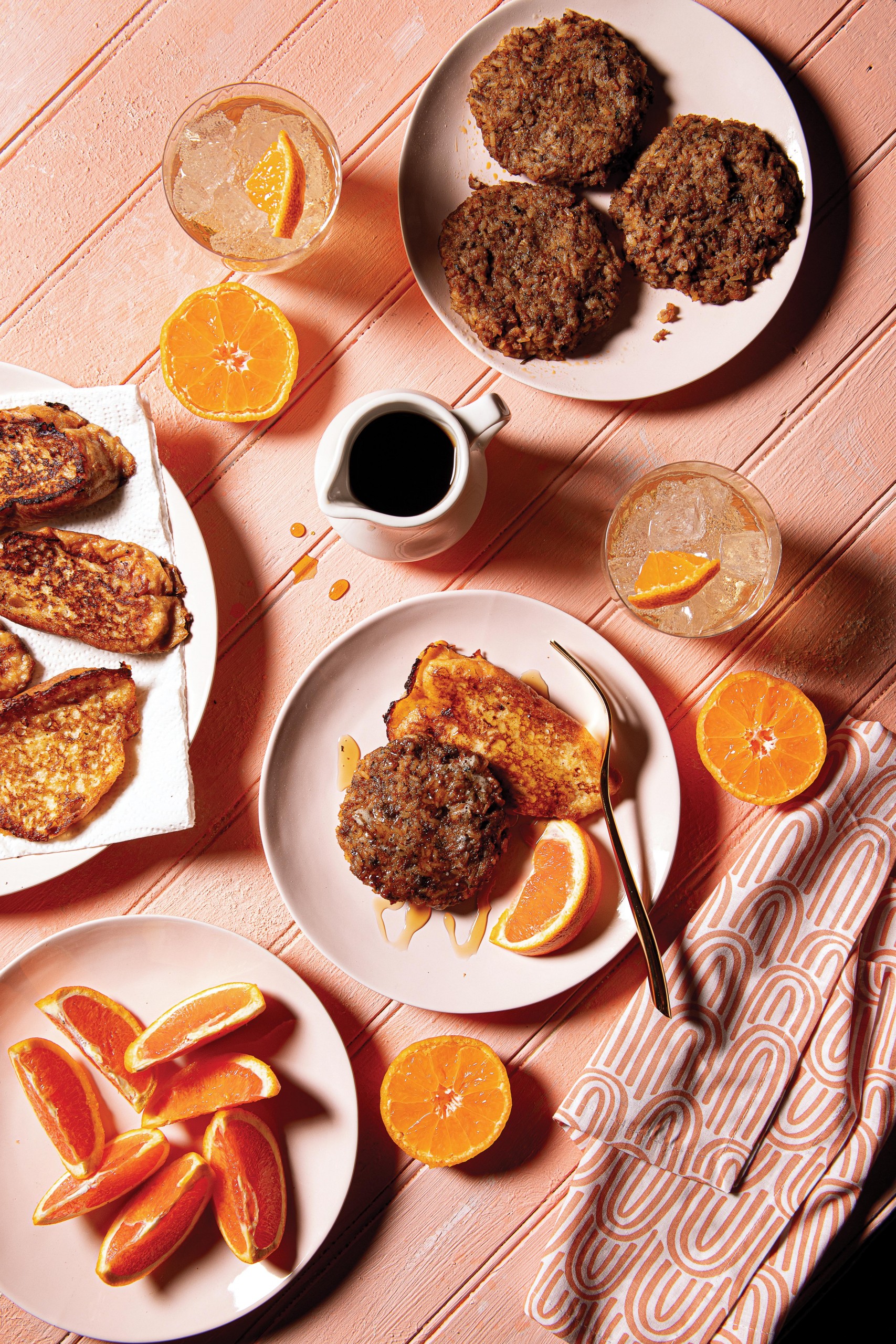 TIP Putting the cooked pain perdu into a hot oven for five or ten minutes actually improves it, as the bread puffs up.

Boudin that is taken out of the casing, formed into patties and broiled acquires a delicious crust. It is particularly delicious when served with pain perdu and cane syrup.

In a wide, shallow bowl, beat eggs well, then add milk, vanilla, nutmeg and sugar and beat to combine. Heat butter and oil in large skillet on medium heat. Working in batches, dip bread in egg mixture, turn to saturate both sides, and fry until nicely browned on one side. Turn and fry on the other side. Transfer to a a rack set on a rimmed baking sheet and keep warm in preheated oven. Repeat with additional bread, adding more butter and oil to skillet, as needed. Serve with cane syrup and boudin. Makes 4 servings. 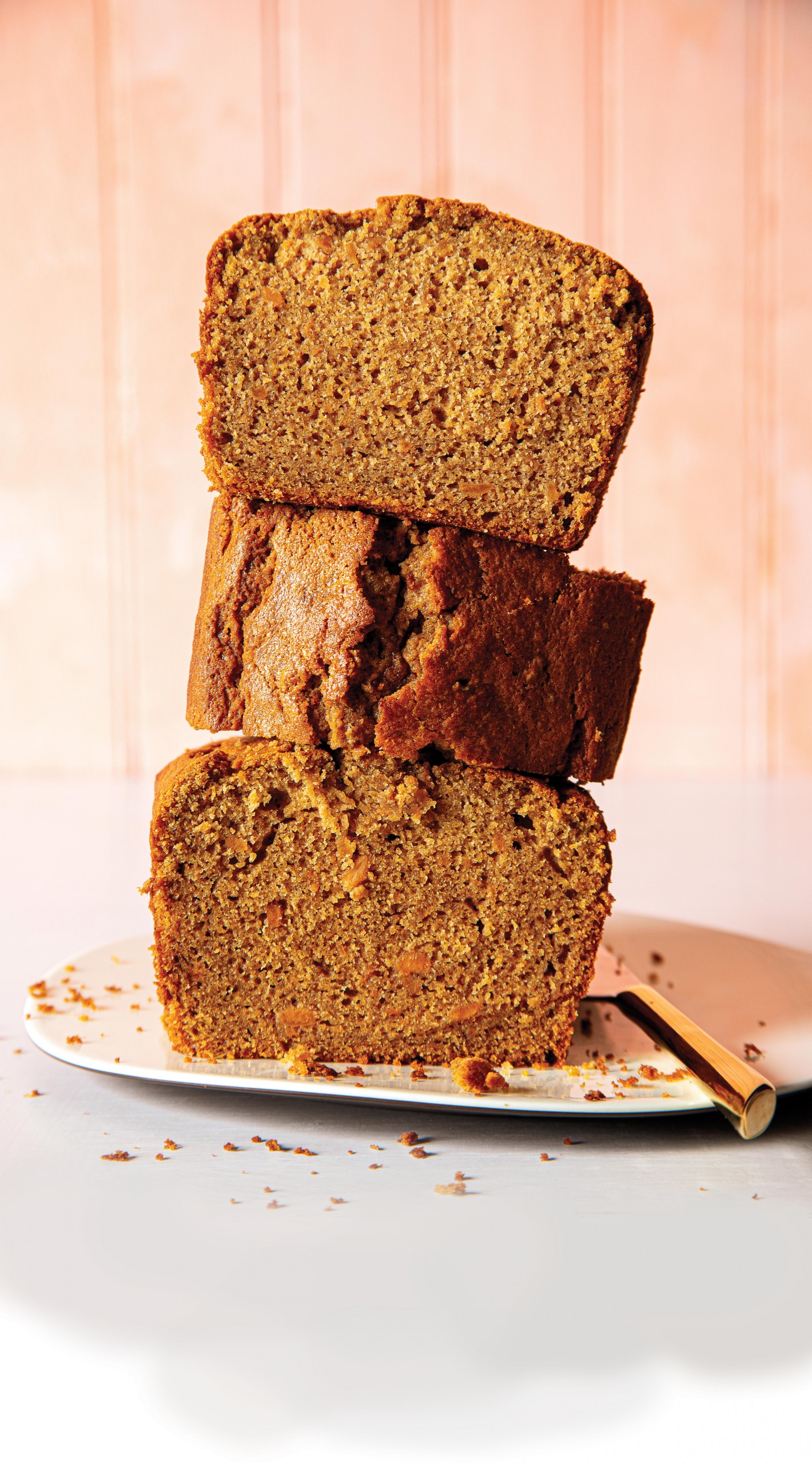 TIP Cooked sweet potatoes can be stringy, so it’s best to cut the raw potatoes into small pieces before boiling.

Here is one breakfast item that should be baked a day or two in advance. If desired, it can be toasted and buttered, but it is delicious simply sliced.

In a mixing bowl, combine flour, soda, salt, cinnamon, ginger and nutmeg, whisk to combine and set aside. In a separate container, combine mashed sweet potatoes and buttermilk and set aside. In a mixing bowl, beat butter and sugar until fluffy. Add eggs, one at a time, beating well after each addition, and vanilla and beat until smooth. Alternately add dry ingredients and sweet potato mixture until well combined. Do not overbeat. If mixture is too dry, add additional buttermilk.

Pour batter into prepared pan and bake until a tester comes out clean, about 1 hour. Place pan on rack and cool for 15 minutes, then turn out loaf onto rack to finish cooling. Makes 1 loaf.