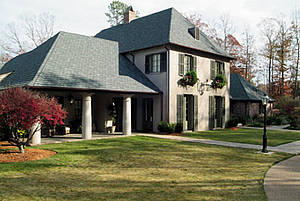 The exterior of the Southern Living Idea House 2005 has a distinct French flavor with high-pitched roofs and large columns.

What happens when Southern Living magazine comes calling? No, not the subscription folks but a member of the top brass asking if you would like to build the Louisiana Idea House 2005. The call came from Tim Watson, Southern Living Idea House manager, who explained that the house would be featured in the monthly magazine and be a part of a special publication called Southern Living Idea House. Steven “Steve” Davison, an attorney, horse breeder and manager of Squire Creek Country Club liked the opportunity: “My family developed the country club and upscale community and it wasn’t hard to convince us to climb aboard the project. We thought it would be exciting and a good way to promote our community and club.” 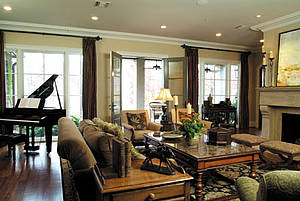 Large windows flank the French doors in the great room; old heart of pine was used for the floors.

Located in Choudrant (five miles east of Ruston) on 1,100 acres of rolling hills, Squire Creek is a planned neighborhood surrounded by an 18-hole golf course designed by Tom Fazio. Golf Digest ranks it Louisiana’s No. 1 course. Part of the project is a 40,000-square-foot clubhouse with a restaurant that features fine and casual dining rooms, a pro shop, library and fitness center. There is also an Olympic-sized swimming pool and tennis courts. 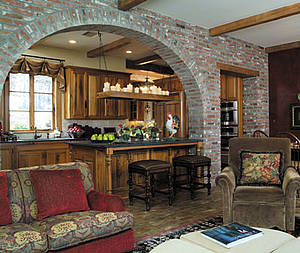 Salvaged cypress was used for the custom cabinets in the kitchen.

When the house was opened to the public the crowds came. “We had no idea so many people would tour the house,” Steve explains. “Visitors signed a guest book so we know they came from all over Louisiana and dozens of other states across the country. We had visitors from California to New York, and even a few from Canada.” 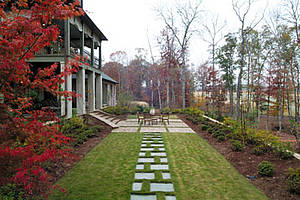 After the last guest left and life drifted back to normal, Steve made a surprise decision. “I bought the house,” he says with a smile. “I was already building a house on the lot next door but I liked the Idea House so much that I just moved in.” Who wouldn’t want to move into the magnificent house that is perched on a hillside overlooking Squire Creek and the golf course? “I even bought most of the furniture that was in the house. Some of it had been sold during the open house but it didn’t take me long to replace what had been moved out.” 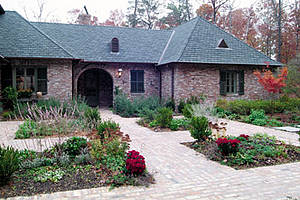 An herb and flower garden fronts

As you would expect from an idea house, the 4,200 square-foot residence has many unique features, including a parterre-style garden facing the kitchen and den room wing. The front exterior is French-influenced with a high-pitched roof and stately columns. The surprise second front entry nearby, called the “friends’ entry,” is just behind the herb and flower garden. It has a brick archway, and there’s a window box under the kitchen window. The rear of the house is a modern plantation style with a broad veranda on the first level and a balcony on the second floor that’s a special screened sleeping porch. “My children [Emily, eight, and Michael, 10] love the sleeping porch,” Steve says. “It’s a great place for them and it also provides the best view of the pastoral setting from the house.” 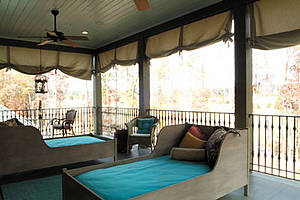 Inside, there’s a brick arched wall leading from the dining room into the great room and another brick archway dividing the den from the kitchen. “I think the brick provides a warm feeling,” he explains. “I like the custom television cabinet made from reclaimed cypress in the den.” The open shelves surrounding the fireplace and trim are painted the same neutral color. Floors are made of aged heart of pine. A hand-stenciled scalloped border on the floors in the den adds interest to the room. 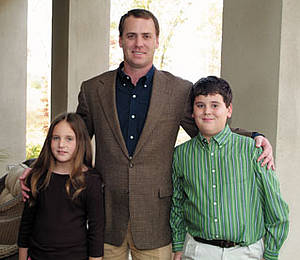 Steve Davison with his daughter Emily and his son Michael; A screened sleeping porch was created on the second level.

Salvaged cypress was used to construct the kitchen cabinets and for facing some of the appliances such as the refrigerator. “One of the best things of all was that I didn’t have to fret about every little detail since Southern Living had made arrangements with many sponsors of the house for the very latest products.” An example is the state-of-the-art, 48-inch, Jenn-Air Pro-Style stainless steel gas stove and hood. “The hanging shelf over the island is another idea that I like. It is used as the perch for about two-dozen candles.” Although Davison isn’t much of a gardener he thinks the potting area, just off the kitchen, is a good idea.

What happened to the house next door that Steve was building? “My twin brother Todd and his wife Renée moved into the house,” Steve replies with the distinct air of pleasure in his voice. “Todd’s not just my twin, he’s my best friend.

“Everything turned out to be a good idea – the Idea House, living in the house, having my twin brother as my neighbor, and having my parents also living nearby.”