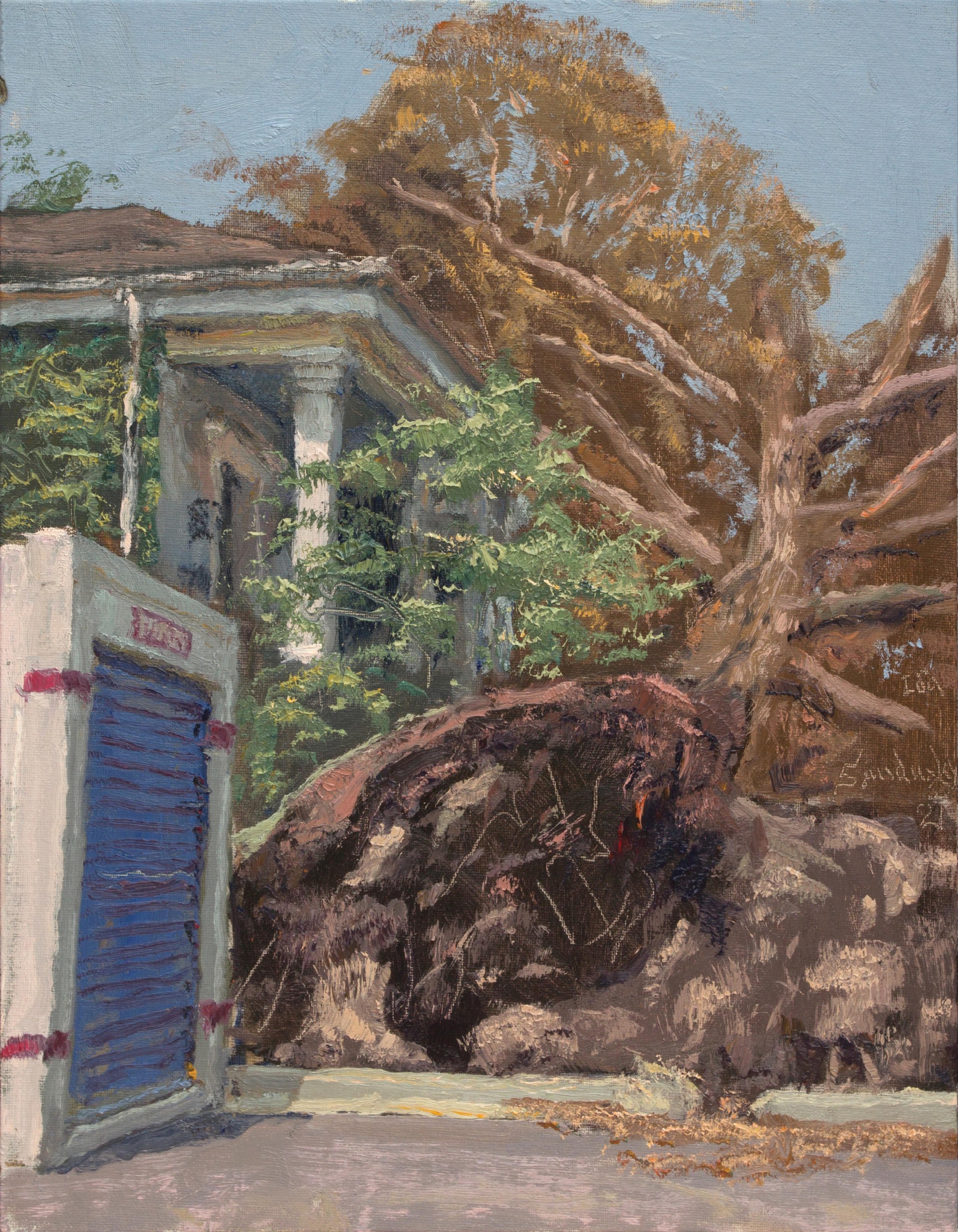 With dark memories of Hurricane Katrina still fresh in his mind, New Orleans artist Phil Sandusky packed up his brushes, paints and easel and headed out late last August into his Uptown New Orleans neighborhood to capture the visual drama and destruction left in the wake of Hurricane Ida.

Walking the streets after Ida struck south Louisiana on Aug. 29, Sandusky found centuries-old trees down and homes badly damaged, yet the city was spared the heartbreaking devastation that Ida had wreaked upon the state’s coastal and river parishes. The first three days, Sandusky acclimated himself to the heat, humidity and lack of electricity. His wife Michele, an artist and social worker, drove to Gonzales in Ascension Parish to stay with friends who hadn’t lost power. Sandusky decided to stay home. Soon his drowsiness gave way to a sense of urgency to get out into his U ptown Black Pearl neighborhood near the Mississippi River levee to document the destruction.

In discussing Ida’s damage in the city, he couldn’t help but draw comparisons to Hurricane Katrina when he spent months moving dangerously alone among the ruins, painting flood-ravaged areas such as the Lower Ninth Ward.

“This wasn’t Katrina,” Sandusky says, trying not to minimize the damage Ida caused in areas outside New Orleans. “This was wind damage instead of flooding. Everywhere you turned the hair stood up on the back of your neck. You would see a house that slithered over a pickup truck that was upside down and crushed on a footing of another house. Katrina was 19th-century naturalism on steroids. Ida was more subtle than that. When I said Ida was not as bad as Katrina, I meant here inside the New Orleans levee system. Outside of it, Ida was a nightmare.”

“First and foremost, it’s beautiful,” he says, referring to the visual interplay of twisted and broken trees juxtaposed against man-made elements of New Orleans architecture. “You see the forces of nature everywhere. It’s human beings against nature and nature always wins. There’s a sense of urgency that lights up in me to go out and capture it. It was a race against time.”

Unlike his Katrina paintings that covered large sections of New Orleans, this time Sandusky concentrated on what he found in his neighborhood. To capture that “urgency,” Sandusky painted on location, as he does with all his landscapes. Working “plein air” enables him to get a full sense of light, shadows and textures. And he works quickly, usually completing an oil painting in a three-hour sitting.

“You get what’s really important about the scene,” says Sandusky, who identifies himself with 19th-century French Barbizon impressionist painters. “My paintings are a lot more simple than you think they are. The mind fills in a lot. Nothing beats the firsthand experience. It’s infinitely richer than reliving the scene through the cheesecloth of sitting in the studio looking at photographs.”

Sandusky’s Hurricane Ida paintings are the latest in his three-decade fascination with the New Orleans landscape and what he describes as the city’s “eclectic old architecture, its lush tropical foliage, its dense atmosphere, and not least of all, its rich culture, which reveals itself here and there with subtle visual cues.”

Sometimes outsiders like Sandusky, who has painted since childhood, are keen to “subtle visual cues” in places like New Orleans. Born in Florida, he studied physics in college and took art to improve his skills. Later came painting classes at the Art Students League in New York. In 1980 Sandusky began his career not as an artist but as an engineer on oil drilling platforms in the Gulf of Mexico. Four years later, the company transferred him to New Orleans where he moved between two worlds — art and oil. Finally in 1992, he quit his job and dedicated himself full-time to painting and teaching.

Since then, Sandusky has gained national acclaim for his work, which can be found in public and private collections across the country. He also has written four books about his art, he is a regular at New Orleans outdoor art markets, and every other year, he organizes his own art shows at selected galleries in the city. In addition, Sandusky taught painting for several years at the New Orleans Academy of Fine Arts but now conducts private workshops. It’s not uncommon to see him with a gaggle of students set up along a sidewalk in the Bywater or uptown neighborhoods, painting “eclectic old architecture” while attracting curious neighbors and passersby.

“Over the years,” he says while gazing around his cramped studio, “I have become a fixture in New Orleans neighborhoods with my palette and easel.”

All cities should have such fixtures — without hurricanes like Katrina and Ida, of course.