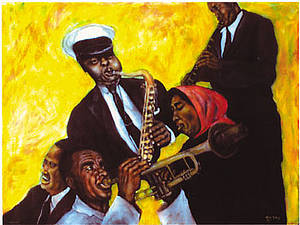 When painter Frank Kelley Jr. discusses his art, he talks about opportunities, stories, decisions and spiritual journeys. His images of the northern Louisiana landscape or jazz musicians suspended silently between riffs are about passion – passion for his art, the land and the people who free their souls through music.

“I am painting from my heart and soul and my experiences,” says Kelley, as his eyes scan paintings hanging from his studio walls. “I’m about telling stories. It’s a calling. I don’t have a choice. I love it. It gives me an opportunity to express myself about things I couldn’t express verbally. There’s also a spiritual outlet in what I do and a belief in a higher being. I don’t know how a person can claim that gift and not acknowledge it came from somewhere else.” 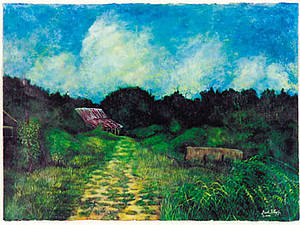 Kelley, who lives with his wife Willie Mae in a fashionable suburb of West Monroe, describes himself as an “abstract artist, a landscape artist and a figurative artist.” His house and gallery, located in a large room to the rear of his home, are both filled with his paintings. Some are abstract but most are figurative. Some capture jazz musicians in full heated swing, some are luminescent landscapes of a Louisiana meadow or bayou and others simply capture intimate moments of country folk enjoying a conversation.

Kelley enjoys the effects his work has on people. “I’ve seen miraculous things happen through my art,” he says. He tells the story about the time in San Antonio, Texas, when an elderly women walked up to one of his paintings during a show and cried. She said she hadn’t been home in many years and his paintings of the rural South reminded her of home. Another elderly woman, who lived in the countryside near Monroe, saw one of his paintings in the local newspaper. “She was 80-something, had little education and worked in other people’s homes all her life. It touched her so much she came here and bought a painting.” He begins similar stories, but stops, saying, “It speaks to them … I’ve been given the talent to express real life things, past and present, that affect people. Each piece has a home.”

Mostly, Kelley wants his paintings to give people an awareness of the world around them. He once said in a magazine interview:
I love to paint landscapes and figures from the jazz world, but my goal is to represent the everyday. I like to paint stories of things and people around me. I also include the forgotten – the homeless. I try to capture memories of scenes from my childhood and life in and around northern Louisiana: a married couple having a quiet picnic together or a lovely child playing. I want to wake people up to the reality of their immediate world – to enlighten them to its beauty. It’s a mission for me. I want my work to have a positive influence on people who see it. I have had the opportunity to see so many generations and listen to their stories at an early age. I can now form those stories into a composition.

One of those memories takes form in the remarkable 1998 painting “Where Are We Going?” It is a soulful piece that gives insight to whom he is as an artist and as a person. In the foreground we see two women, one dressed in white and the other holding an infant. In the background, three white churches are connected side-by-side. Kelley describes this piece:

It’s about the three churches I grew up in. One is Methodist, one Baptist and one Church of God and Christ, where my uncle was a preacher. I’m not religious but spiritual. In this painting, I’ve gathered all three of those churches together to form one, who I am. The lady on the right [in white] is Mrs. Barr who owned a little store in Vernon. She took a liking to me and gave me things. The woman holding the infant is my mother, holding me. The other people are my cousins. The cross overhead on the middle church identifies that we’re praying for them. It’s about me and the spirituality in my life and being around loving people. I had encouragement all my life and there’s no way I could have been [a] success today if I had not listened to those elderly people. My grandfather told me to stay focused and my father, who was a school board member, supported me and allowed my brother and sister and me to go on to college and be successful. 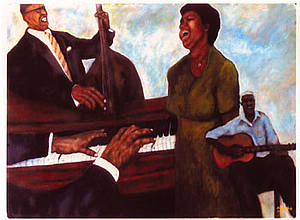 Kelley knows the region and people well. Now in his mid-40s, he was born in Monroe but grew up in rural Jackson Parish in a four-room house with no running water or telephones. Art – especially art galleries – were almost unheard of during his childhood. Though he drew as a child and was always called upon in elementary and high school to produce posters for various events, Kelley received his formal art training at Grambling State University, where he received degrees in liberal arts and business. He credits the art faculty at Grambling, especially James Shane, for encouraging him and helping him develop his early skills in drawing and painting. After college, Kelley spent 15 years in automobile sales, honing his painting and composition skills at night and on weekends. He knew he had a calling but was unsure of where it would lead him. 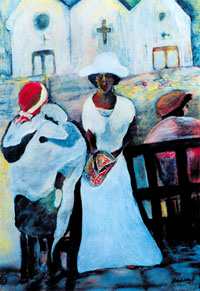 Kelley’s “Where Are We Going”

Although he has been a professional artist for almost 14 years, his big break came in November 2000 when the national arts magazine Arts & Antiques featured him as an “Emerging Artist.” The article and immediate response, including corporate commissions and calls from collectors and galleries around the nation, gave him the confidence and “validation” he needed to quit his day job and devote himself full time to his art.

“That was one of the greatest feelings of my life,” he says, recalling those immediate moments after learning he would be featured in the magazine. “It was incredible. It was a validation of my work. I was driving home and stopped at a light. Tears started pouring from my eyes and I said, ‘Thank you, Jesus.’ I was so grateful for being chosen, not as an artist but as a human being. It was a reward for hard work and being dedicated to what some people told me would not work. I knew I had a talent and the world could not see it,” he adds.

“I hoped it would help the way people see things. I started thinking about all those artists, such as Elizabeth Catlett, Charles White, Joshua Johnson and Henry Tanner, who didn’t get notoriety until they were deceased,” Kelley says. “To know that while I lived I would get respect was an awesome moment. The road to success was about to start for me.” 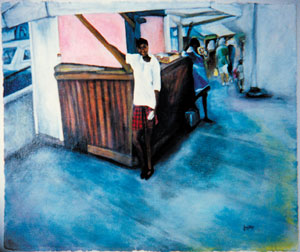 Kelley often works on four or five paintings at a time. “It’s a great balance,” he says. “When I’m painting I have so many ideas going. It’s a symmetry that works for me.” Each painting begins in meditation and prayer, letting images rise like specters in his imagination. “I think of stories and things I want to paint and then I draw them out and over time they come to fruition. I may paint 30 minutes on one, then another.” When he’s painting a gospel scene, he listens to gospel music. If it’s a jazz band, he listens to jazz. “I try to imagine myself blowing a horn and thinking to myself what does it feel like, the burning in [the musician’s] cheeks when he gives it his all. I do that for all my paintings.”

In addition to his painting, Kelley has an almost missionary zeal for personal salvation through art – not necessarily spiritual salvation, rather salvation in the sense of giving hope and direction to disadvantaged and troubled children. A couple of years ago, he formed the Educational Arts Initiative Program to teach art in Richland Parish schools. Since 2004, he has conducted art workshops in four schools where he teaches children how to paint and to see their lives differently – not just through the clothes they wear, the cars they drive or the houses they live in. He talks about example, motivation, friendship and hope. “I show them that I came from a rural background and that [they] can achieve something, too,” he says. “It’s a way for them to express their anger and share their experiences. It’s not about me. I just want people to realize it’s a ministry and I’m following it wherever it takes me down the road. I can’t change every child but I possibly can change one or two.” Kelley hopes the state will adopt his program and send him to other parishes around the state. Meanwhile, back in Richland Parish, the Northeast Louisiana Arts Council, BellSouth, Entergy and the Rayville Arts Council have helped support this extraordinary effort. “It makes you feel like you’ve accomplished something,” he says. “I wish more people would go into the schools and work with these children.”

So far, Kelley has had a remarkable journey. He is represented by Thelma Harris Art Gallery in Oakland, Calif., and gives private and corporate shows to collectors all over the country. He has clients throughout the nation and as far away as the United Kingdom and Switzerland. His work was featured at the 2003 Music City Jazz, Blues and Heritage Festival in Nashville and the 1997 New Orleans Jazz and Heritage Festival. His dream is to have his work in the nation’s most important public and private collections including the Ogden Museum of Southern Art in New Orleans and at the Metropolitan Museum of Art in New York.

“I know God has me on this journey,” he says. “I don’t know where I’m going, but I do know I’m going somewhere incredible and I’m taking a lot of people with me.”

Kelley’s paintings can be seen at his Creative Paintings Inc., available on-line at www.frankkelleyjr.com.