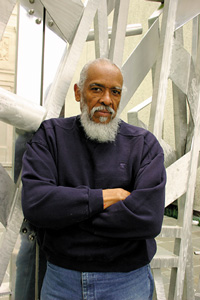 Spirit House,” “Circle Dance,” “Middle Passage,” “Dance for My Father,” “Spirit Gates” – all are but a few names the nationally acclaimed New Orleans artist John T. Scott gave to a remarkable lifetime of art that gained him a name and following only dreamt of by most artists. They are spiritual cantatas of an artist’s journey and connection to a place, a people, a culture, a religion and rhythms from the streets of New Orleans. They are physical and spiritual bridges between life, the imagination, creativity and mythology.

On Sept. 1, 2007, Scott – known for his African-Caribbean-New Orleans inspired kinetic sculpture – died in Houston after two double lung transplants and his long struggle with pulmonary fibrosis. He was 67. 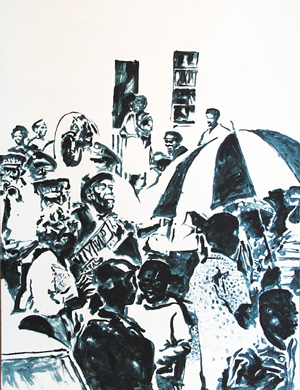 Later that same month, in tribute to Scott on New Orleans public radio, local artist and art activist Jacqueline Bishop described this New Orleans “original” as an artist and person who “needed New Orleans as much as New Orleans needed him. He was part of the ecosystem. If you didn’t know John Scott, go to Woldenberg Park to see his sculpture or to De Saix Circle in Gentilly to see ‘Spirit House’ [both in New Orleans] or venture to 18th and Vine in Kansas City, Mo. He’ll be there. He is everywhere in us.”

Scott was indeed a New Orleans original, one who has left the reflection of a human soul in brightly colored metal rods, suspended on high-tensioned cables in a silent dance between myth and fable, between the rhythms of the street and currents of air. He has given us abstract monuments to our shared past. His art, though greatly influenced by African-Caribbean and New Orleans culture, is not a single story but one that is universal. Aside from the narrative, one can simply enjoy Scott’s work for its complex but graceful beauty. 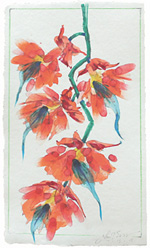 During his long career as an artist and teacher, Scott, who taught art at Xavier University in New Orleans for over 40 years, gained national acclaim for his work. In 1992, Scott received the prestigious “Genius Grant” from the John D. and Catherine T. MacArthur Foundation for his creativity as one of the nation’s most innovate artists. In 2005, the New Orleans Museum of Art recognized his contribution to American art in a major retrospective, “Circle Dance: The Art of John T. Scott.”

“Scott didn’t like to be categorized – like New Orleans artist, African-American artist, et cetera,” says John Bullard, executive director of the New Orleans Museum of Art. “I do think that he was a great American artist, excelling in several media – sculpture, print making, drawing. He also was a great educator and an extraordinary role model for young people aspiring to a career in the arts. NOMA was honored to have presented his comprehensive mid-career retrospective in early 2005 – as it turned out just in time.” A month after the show closed, Hurricane Katrina devastated the city, forcing Scott and hundreds of thousands to flee to Houston and other cities around the nation. 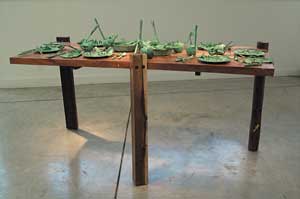 Ironically, Scott, with perhaps some unknowing premonition, executed a series of black-and-white woodcut prints in 2002 and ’03 with imagery of New Orleans that could’ve been done immediately after Katrina hit the city on Aug. 29, ’05. In works such as “Cathedral” and “Storm Coming,” we see mass destruction in the city, with destroyed houses, cars and other flotsam of life piled high in mountains of rubble.

DRAWING FROM NEW ORLEANS
Scott drew heavily upon life in New Orleans, especially the city’s rich black experience, culture and musical heritage in creating vibrant kinetic sculptures that often explored themes such as the “diddlie bow” from West African mythology or the rhythms and movements inspired by early 19th century slave dances in the city’s famed Congo Square. Other times he captured the iconic symbolism of his Roman Catholic upbringing, such as in his 1970 steel sculpture titled “Crucifixion” or the harshness and brutality of poverty, as seen in his series “Third World Banquet” with bronze dinner plates filled only with spikes. His work also often reflects the inner-city angst of violence and hopelessness symbolized in “Urban Crucifix,” a moving piece in which the sacrificial body of Jesus nailed to a cross is made up of broken pieces of rifles, shotguns and pistols. The often-violent civil rights struggle radiates from his “I Remember Birmingham,” a dramatic painted steel construction that represents the bombing of a church in Birmingham, Ala. Rising from the fire are the angelic spirits of the little girls who died in the blaze.

In the catalog that accompanied his 2005 retrospective at NOMA, Scott used the words “jazz thinking” to described his mindset while creating his art: “[I]f you listen to a really good jazz group three things are always evident … [The] jazz musicians are always in the ‘now’ while you’re hearing it but these guys are incredibly aware of where they have been and have an unbelievable anticipation of where they are going … To me that’s jazz thinking. It’s improvisational thinking in the sense that I don’t have to contrive some system of connecting two things that don’t seem related because I understand the relationship.” 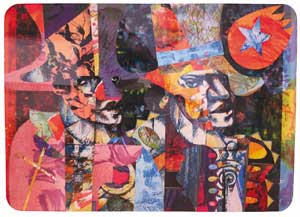 Scott constantly looked to the soul and passion of New Orleans and Delta music to describe his work. “I think my sculpture is a lot like the blues and jazz,” he said in a 2002 public radio interview with Jacqueline Bishop, who asked him if he thought his work was narrative. “If one looks at the blues, the blues is a narrative. It’s a story. Jazz just elevates the blues leaving the storyline out and just taking the structure. I think my work can be taken on many levels. It is narrative in nature but the narrative is very abstract. There are other times when there’s nothing more than the rhythm, the color and the structure.”

WORLD’S FAIR
Scott knew early in life that he would be an artist. A teacher at Booker T. Washington High School in New Orleans urged him to attend Xavier University. He did and it was there he came under the influence of Numa Roussève and Sister Mary Lurana Neely, two members of Xavier’s progressive art faculty. He later went on to get a master’s degree  from Michigan State University’s renowned art school. In 1965, he returned to New Orleans where, at the urging of Roussève and Sister Lurana, he joined the Xavier art faculty. A few months later he married his longtime girlfriend, Anna Rita Smith. Another milestone in his career came in the summer of ‘83, when he received a grant to study in New York under the internationally acclaimed sculptor George Rickey. Prior to working with Rickey, Scott had been interested in doing kinetic sculpture but didn’t want to copy Rickey or the work of famed sculptor Alexander Calder. During his summer with Rickey, Scott got his answer. Rickey said: “Don’t sweat it, just do your work.” 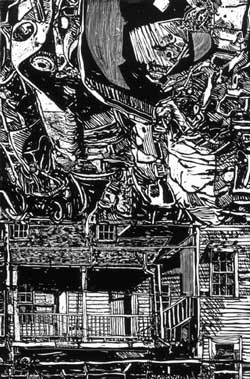 That moment came in 1984 while Scott was working on the “I’ve Known Rivers” exhibit in the African-American pavilion at the New Orleans World’s Fair. In his research, he came upon a bit of West African mythology about the “diddlie bow.” Scott related the story to Bishop in their 2002 interview. “When the early hunters killed something it was a tremendous sense of remorse,” he said. “So, the hunter would turn his bow over, change the tension on the string, and have a companion play the string. That would give a libation of sound to the soul of the animal that gave its flesh to the people. That idea so struck me that I started making bow-shaped sculptures. It dawned on me almost immediately that [if I had] any line between two points and I stuck something on that line I had a kinetic vocabulary.”

Scott continued: “The ritual of using a weapon of war to create a libation of spiritual peace is commonplace. Wherever we went in the diaspora, the instrument came with us. That instrument came into the Mississippi Delta and it was called the diddlie bow. The musician’s name Bo Diddley came from that instrument.”

In describing the constant influence New Orleans culture, music and the black experience had on his work, Scott often said, “New Orleans is the only city that I’ve been in that if you listen the sidewalks will speak to you.” In his 2002 public radio interview, he reflected upon those sounds: “To me, New Orleans is like Dracula’s casket. I can travel anywhere but I have to be here to be alive because a lot of my ideas are coming out of the culture of this city, coming out of the reality of this city.” Elaborating on what he meant by the city’s special culture, he said: “Other people talk about culture but I think people here live their culture. When you see people dancing in the street, it’s not about entertaining somebody. It’s not about art, it’s about life.” 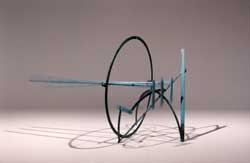 Like so many other New Orleanians living in exile, Scott looked forward to returning home. Two months before Scott died, New Orleans art critic Doug MacCash interviewed Scott by telephone in Houston. “That’s the only home I know,” he told MacCash. “I want my bones to be buried there. I belong there. I need New Orleans more than New Orleans needs me.” On Sept. 1, his spirit finally came home, though one might argue that it never left.

Scott is represented in New Orleans by the Arthur Roger Gallery and his work can be seen at Woldenberg Park in front of Jackson Square on the New Orleans riverfront, the Ogden Museum of Southern Art in New Orleans, the New Orleans Museum of Art (including the museum’s exterior Courtyard Gates) and by appointment at the Louisiana Endowment for the Humanities offices in New Orleans, which houses the largest public collection of Scott’s work.