Carnival’s Gateau des Rois may have its beginnings in France but today’s Louisiana king cakes have evolved so much over the years, the seams of origination have almost disappeared. We still serve king cake on Twelfth Night, the start of the Carnival season on Jan. 6 when the Wise Men brought gifts to the baby Jesus, and the person who receives the present inside becomes king or queen for the day. But since the tradition crossed the ocean from the French motherland it has changed in taste, styles and color. And with each passing year, there’s a new take on the king cake tradition.

Sucré in New Orleans adds sophistication and luster to its king cake, while bakeries in Central and North Louisiana cook up theirs with fillings inside, producing moist, flavorful cakes. In Lafayette, a savory boudin king cake was born, topped with Steen’s syrup and cracklins. In addition to experimenting with king cakes, Louisiana restaurants have been serving king cake fries, burgers, coffees and cocktails.

For the traditionalists, the folks at Pouparts of Lafayette, who hail from France, offer the more subtle and equally delicious French variety, while New Orleans bakeries still serve up and sell by the thousands the oval doughy cake topped with icing and sugar sprinkles in the Carnival colors of purple, green and gold.

What’s your favorite way to eat king cake? Take a trip around Louisiana and find out.

Years ago when Shreveport-Bossier City’s Mardi Gras was in its infancy, the Saturday parades rolled right past Tubbs Hard-ware in Bossier City. The revelry was fun for some, but to Don Tubbs it hindered business on the busiest day of the week.
Tubbs had always done cooking demonstrations at the hardware store so he decided to capitalize on the event by creating a king cake recipe and selling the cakes in his store. He experimented with styles, and one day while home sick he watched Emeril Lagasse on TV baking a cake and then freezing it to lock in the moisture.

“[Lagasse] said after you thaw it you’ve completed the recipe,” Tubbs said.

That secret and adding lots of filling to his “Extreme King Cakes” make them different from those sold in New Orleans, Tubbs explained.

He must be doing something right as he sells 10,000 of his king cakes every year.

Flavors include traditional cinnamon, extreme cream cheese and strawberry, but new to the lineup is blueberry.

“The blueberry king cake has been the social media rage,” Tubbs said.

This year, Tubbs will begin delivering his king cakes, but without the sugar decorations that sometimes get spoiled in shipping. He will include a separate container of icing, plus a booklet on how to decorate the cake and the king cake story.

Tubbs isn’t the only one in town creating king cakes taking the public by storm. Lilah’s Bakery creates scrumptious king cakes in three sizes and 22 flavors, baking the filling inside the non-braided dough with a fondant icing on top. Some of the flavors include Bavarian cream, peanut butter and chocolate and tiramisu. The king cakes have become so popular — more than 12,000 a year and shipping across the country — that the bakery remains open only for the Carnival season.

“We work really fast during Mardi Gras and we chill out the rest of the year,” said Lisa Tike, who owns the bakery with her husband, Sopan.

Magic Grill, with locations in Monroe and West Monroe, serves up a King Cake Burger using a slice of regular king cake that’s heated on the grill and used as the bun. Diners choose their own additions, said Jada Ali, who owns the restaurant with her husband, Faisal. Along with the requisite fries, the dish comes garnished with Mardi Gras beads. 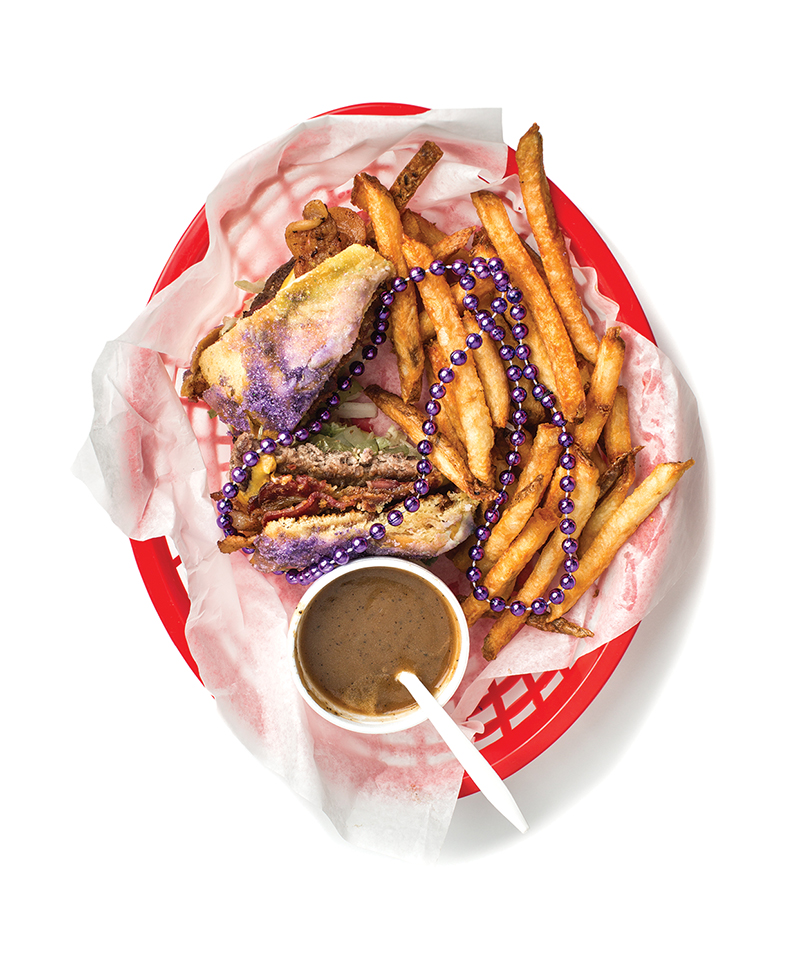 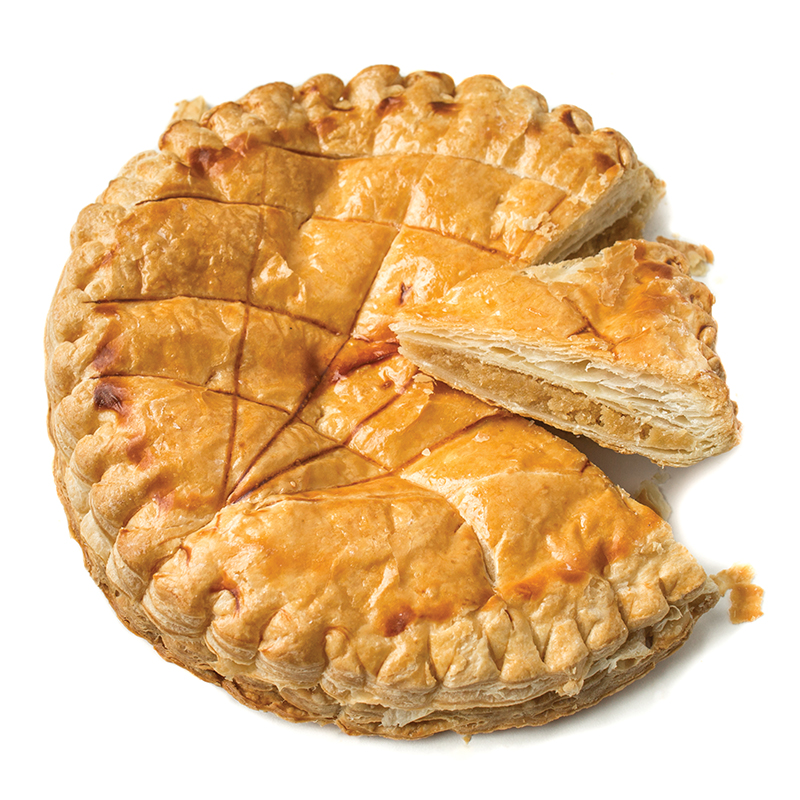 Chalk up Acadiana as running the gamut of styles. Pouparts Bakery in Lafayette serves up both traditional French Gateau des Rois — the family hails from France — and the sugary delights we know of today and Twin’s serves a pastry taking the state by storm, the boudin king cake. In addition, there’s the fried king cakes at Meche’s and Cajun Market Donut Company and a gluten-free cake at Bibi’s Patisserie. For those who desire the traditional Louisiana king cake, Keller’s Bakery, the oldest in Lafayette, uses an old family recipe from New Orleans.

Pouparts hails back to the 1960s, when modern king cakes were relegated to New Orleans. The family introduced Lafayette to a traditional French king cake, a puff pastry filled with almond marzipan and topped with a paper crown. Like in Louisiana, whoever receives the baby or other item inside the pastry on Twelfth Night — when the Wise Men brought gifts to the baby Jesus — will be the king or queen of the party.

University of Louisiana at Lafayette professor Robert Carriker, who’s obsessed with everything boudin — he created BoudinLink.com and is author of “Boudin: A Guide to Louisiana’s Extraordinary Link” — decided that Carnival needed boudin as well. He experimented with a boudin king cake and approached Twin’s Burgers & Sweets to ask if they would be interested in producing something new.

The boudin king cake consists of a savory dough and boudin marriage, drizzled with Steen’s syrup on top and cracklin’ bits. When Twins’ started selling the novelty cake, Acadiana residents lined up to get a taste. Demand has been so high that other bakeries throughout Louisiana have taken up the call, including Quebedeaux’s Boudin and Cracklins in Alexandria and Lilah’s in Shreveport.

But don’t despair if boudin’s not your thing. Twin’s offers a wide variety of traditional Louisiana king cakes, including Bavarian, amaretto and an Elvis king cake consisting of peanut butter, bananas and bacon.

Botsky’s in Lake Charles, known for their gourmet hot dogs, believes in mixing sweet with savory as well, garnishing sweet potatoes for their king cake fries. 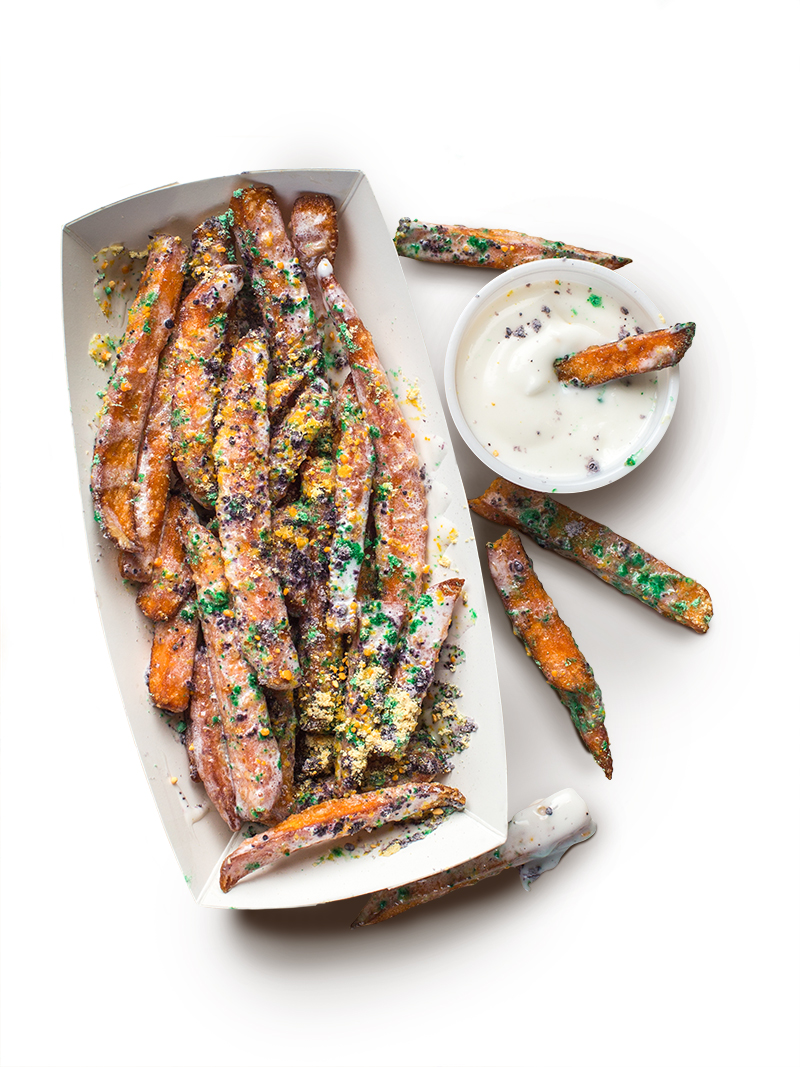 Twin’s Burgers and Sweets
Locations in Lafayette and Youngsville • (337) 268-9488 • twinsburgersandsweets.com

The Bourbon House in New Orleans has been offering a King Cake Bevvy for almost a decade, starting with Twelfth Night and ending on Lundi Gras. The following is a recipe for those who want to try the bevvy at home. 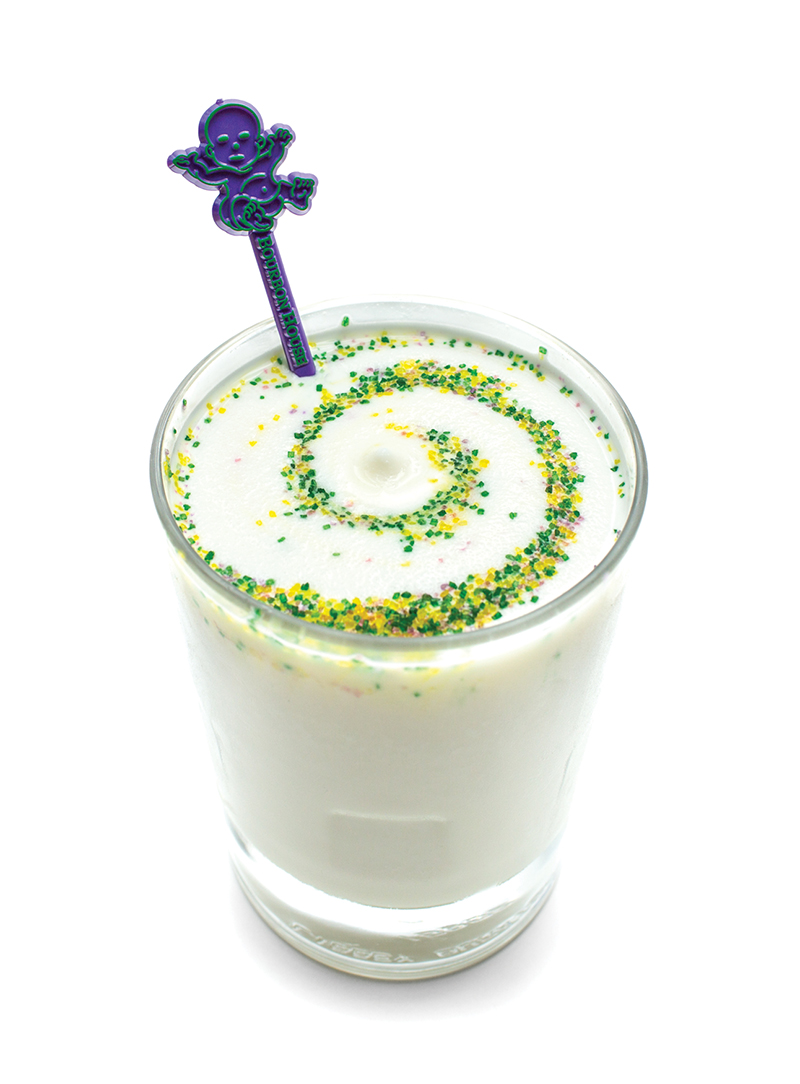