Lent is upon us, and probably just in the nick of time. The human body can only take so much Mardi Gras before it spirals into an altered state. Someone once said that Louisiana itself is an altered state of reality, and they may have been onto something. But even alternate realities need to take a break, and Lent provides just that opportunity.

With all our delicious seafood, going meatless has never been difficult. I suppose if we really want to make a sacrifice for Lent, we should give up seafood as well as meat. I’m not going to go that far, but truth is, for a while now, I’ve found myself eating more vegetarian meals, for reasons I can’t really explain. It hasn’t been a deliberate choice; it’s just something that happened. I’m certainly not dogmatic about it, and neither am I a purist. I’ll often use chicken stock or a small amount of cured pork or dried shrimp to season a vegetable dish.

I’ve left meat and chicken stock out of this month’s recipes, but I don’t think you’ll miss them. Mustard, garlic, anchovies, hot pepper, various spices, such as Cajun/Creole seasoning and smoked paprika, and assertive cheeses provide more than enough flavor to please a jaded palate.

Frankly, these are some of my favorite everyday preparations. I’m extremely fond of lentils, especially the small green French du Puy variety, which can be prepared as a hot dish, a soup or, as in this month’s recipe, a salad. The name “lentil” has led some to assume a connection to Lent, and though they are a popular Lenten food in many Roman Catholic countries, experts pooh-pooh the idea. Actually, the name is derived from the Latin “lens.”

Cauliflower is boring when boiled to death and covered with a white sauce, but roasted and enlivened with anchovies, garlic, hot pepper, capers, fried bread crumbs and Pecorino, it is scrumptious. I sometimes make a meal of it, along with good bread and wine.

I love fish cakes, particularly when they’re made with salt cod and potatoes, but I can’t find salt cod where I live. Flounder or some other white fish can be substituted, though the flavor is not as assertive. Finally, a tasty and quick meal can be prepared from onions, peppers and eggs. I like to eat the dish with tostadas, but tortillas or pita bread are good alternatives.

Core and separate cauliflower into small florets. Toss with ¼ cup olive oil to coat. Place on a rimmed baking sheet and roast until browned, about 30 minutes. 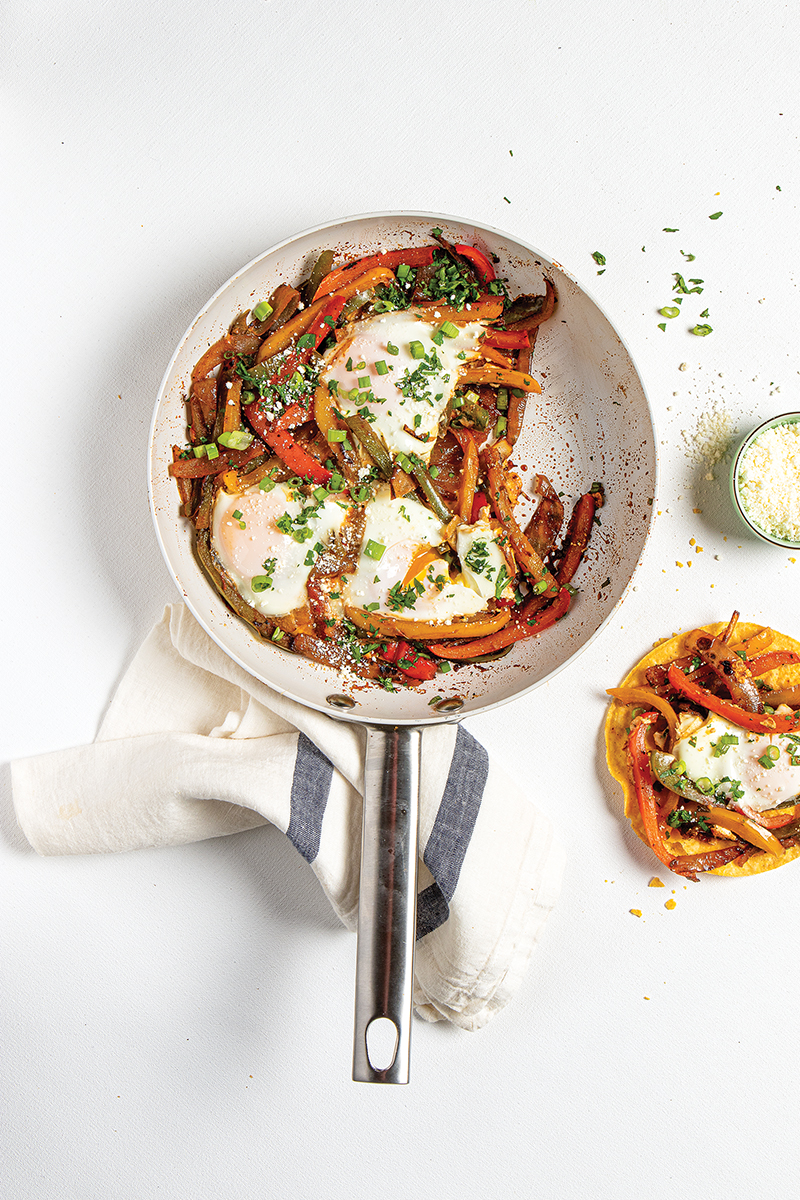 Smokey Pepper And Onion Stew With Eggs And Tostados

Heat olive oil in a large skillet. Add onions, peppers and garlic, cover pan and cook on medium-low heat, stirring occasionally, until onions are browned and peppers are soft. Add water and season with salt, pepper and smoked paprika.

Break eggs over the vegetables, cover pan and cook until whites are set and yolks are still soft. Sprinkle with parsley, onion tops and cheese. Serve over or with tostadas.

Sort and rinse lentils. Combine lentils in pot with water and bay leaf. Bring to a boil, reduce heat and simmer until lentils are tender, about 25-30 minutes.

Make a vinaigrette by combining olive oil, vinegar and mustard in a mixing bowl, whisking until emulsified.

Place potatoes in pot and cover with water. Add salt and lay fish fillets on top of potatoes. Bring to a boil, reduce heat and simmer until potatoes are cooked through, about 10 minutes.

Heat about a quarter inch of clarified butter or oil in a skillet. Dredge fish cakes in flour and fry until browned on one side, about 4 minutes. Turn fish cakes and brown on the other side. Drain on absorbent paper. If working in batches, keep fried fish cakes warm in a 200 degree oven.

Place all ingredients in a bowl and stir to combine. Makes about 1 cup.